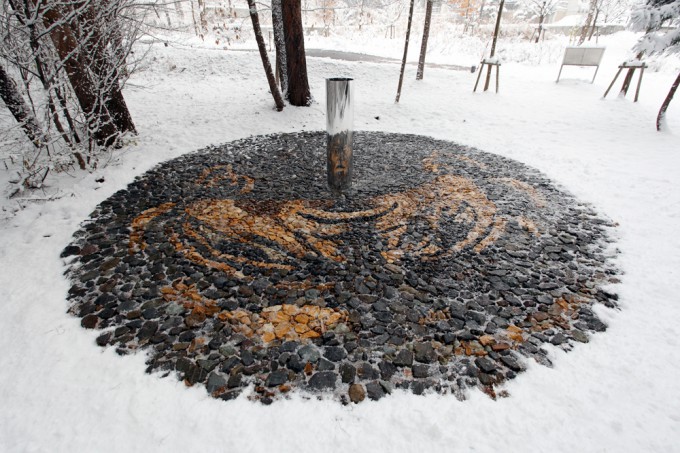 Anamorphosis 3, The sclpture you walk on

Intervention in Nature: Pal Peter’s pursuit of his perspective

PAL Peter is an artist who has frequently participated in nature- and land-art exhibitions in recent years, in which artworks made through a so-called nature-related approach are shown. He also works as a restorer engaged in the restoration of church murals, the cultural heritage of his native country Romania. For this reason probably, his works show strong implications in history as well as nature around him.

Taking part in the artist-in-residence program of Aomori Contemporary Art Centre in the fall of 2005, PAL Peter produced Anamorphosis III reconstructed. As the title indicates, this piece employs the anamorphic technique. In anamorphosis, an intentionally distorted image is drawn or painted, and with a conical or cylindrical mirror placed on it, the drawing or painting is viewed from angles different from the usual, obliquely or horizontally, so that the image appears reconstituted as normal. Its approach is a sort of trick art technique, which has been popular for many years as the fruit of enjoyable playfulness and satire to criticize the system and society, which are not to be done openly. For an open-air piece, Pal collected local fieldstones in Aomori where he stayed, and embedded them in the ground to create a space similar to a stone pavement. At first glance, it appears to be a round open space paved with stones of various colors. Coming close to a certain point, however, you will find an image of a human face formed on the surface of a cylindrical mirror set up in the center. As the face is modeled after an Aztec mask, a contrast is made between a visible phenomenon (an ephemeral aspect of an image in front of me) and the established cultural history and tradition expressed in the form of the Aztec mask. This might coincide with Pal himself seeking to obtain his own way of contemporary expression while tackling a task of restoring historic relics. Artworks made for exhibitions of the artist-in-residence program are usually removed or dismantled after exhibitions, but this piece of Pal’s was left behind as an ACAC’s open-air sculpture.

About six years have passed since then. Partly because this piece was made temporarily for the exhibition, and in woods were plants growing between stones and activities of animals like moles coming out, stones laid all over moved gradually and the image reflected on the cylinder began to look distorted. Therefore, PAL Peter was invited to come back for the program with the primary objective of reproducing or restoring this piece. At the same time, he was asked to participate in Re-Modernologio phase 2: Observation and Notation to introduce his current activities. Pal agreed to the request, and besides reproducing/restoring Anamorphosis 3, he created a piece for the program exploring his own approach to analyze the key word “re-modernologio.” As Pal himself explains,[i] therefore, there is a clear line drawn between his way of involvement in this project “re-modernologio” as well as his approach to this key word and those of his Japanese counterparts.  In the first place, rather than producing works from city people’s angles and/or using his collection of daily things, matters and phenomena, he has created many works through his intervention in the environment, nature and history around him.

As regards the subtitle “observation and notation,” he focused on “viewing” for the reason mentioned above. Pal’s new work this time is Another Place[ii] which provides us with a device to view scenery in a different way. In the center of a wooden frame is a round window made of polyvinyl plate and vinyl sheet filled with water. It functions as a convex lens and is placed in the center of a water terrace surrounded by a pine wood. What is shown on the part of convex lens is a scene turned upside down. In the scenery reflecting a shallow, clear pond with a mirror-like surface, an azure sky and the in-between pine wood, the surrounding trees look reversed on the pond and they turn around again on the lens-like part, so that it often becomes hard to tell the difference between the top and the bottom. Whichever it is, it becomes a fragment of the scenery because it is distorted once it is caught up in the frame and cut off from the scene around it, though it is simply a reflection of the surrounding landscape. Another Place, in which this distorted image emerges in the center, and Anamorphosis 3, in which a distorted image reflected on a curved mirror surface of a cylinder is visible as “normal” (as viewers believe), are presented as a pair of works. Pal intimates to us that a reality that we believe in is definite could be ephemerally distorted. He also states that the work symbolizes a feeling of freedom we have when we are released from fixed images and ideas as we change our viewpoint. There we realize that Pal contrasts his ephemeral current situation and solidly established history as well as his thoughts on our perception. At the same time, it seems that he is interested in how to view things and how their images are formed.

Both of these works for the exhibition share a common feature that “images become distorted through a viewpoint,” and so far he has produced many works using similar illusions and anamorphosis. The turn of the waters (2007) is an example of land art depicting an image by cutting plants with a sickle on the vast ground covered with rich green. Here, using a deforested area on a hill before his eyes, Pal made a square on the three-dimensional ground by cutting plants in straight lines starting from a certain point. This diagram is visible only from one certain point. As the stage where this work was developed is the vast ground, it would be difficult for visitors to find that point unless they knew his intention. On the other hand, however, even if you found this diagram, you would misunderstand the actual geographical features of the land due to the confusion caused by different undulations of the diagram. What is in prospect here is to change ephemerally the original form of nature by performing a little additional work to it.

After the exhibition started, Pal still kept working to produce his next piece for the program. This video work is The Arcimboldo sashimi. As the title suggests, it refers to portrait paintings by Giuseppe ARCIMBOLDO, a genius painter of mannerism in the latter stage of Renaissance in the 16th century. In his work, appropriating the Arcimboldo’s portrait series made entirely of such objects as fish, flowers and fruits to form precisely a likeness of the portrait subject, Pal produced and filmed imaginative portrait heads actually made of fish. As to this work, Pal mentioned that it showed his involvement in the artist-in-residence in Aomori.[iii] As fish used was cut and eaten at the very end, I believe that he tried to connect his work with “everyday life” in Aomori by depicting how its food culture is.

Pal has often produced new works by redoing old paintings, which are “masterpieces” so to speak. Pal interprets that borrowing from works of great masters in the past is the same as using the Aztec mask. It means a dialogue with old works, and he is probably thinking over today’s artistic viewpoint by replacing the perspective representation and image layout, which are historical art heritage invented by human beings, with the real. One cannot deny that his present work and his experience as a restorer tracing old works repeatedly to restore them overlap each other.

Art and Nature are conflicting words. Human beings have secured their “lives” using nature by acquiring “techniques.” In the art scene in Europe, for example, in Italian and French academies, the conflict between the two was obvious, because painting only nature was long denied its raison d’etre and landscape paintings were treated many years as low ranking. According to Pal, “Nature has its own form, which is like a system in which sculpture exists in nature. Natural forms are sculptural and the sculptural are like natural structures.”[iv] Though Pal does not consider nature and art to be conflicting, he seems searching for a kind of technique, that is, a system specific for integrating forms through intervening/getting involved in nature by using an everyday method. The great mixer which he is currently working on (2010-2011) is a concrete mixer made of very few tools and operated by man- and horse-power. It shows how Pal is creating a mobile piece through his production approach of intervening/getting involved in nature with minimum power. The work has no sense of conflicting values dividing nature and humans, and it reminds us of our history of primitive originality of human beings living on the earth.

[ii] Lens was used for the titled during the exhibition, but it was changed to Another Place.

[iv] Pal’s lecture in the session of “Creation of Art” held at Aomori Public College on November 9, 2011. 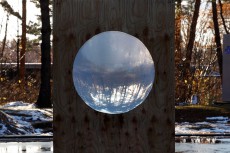 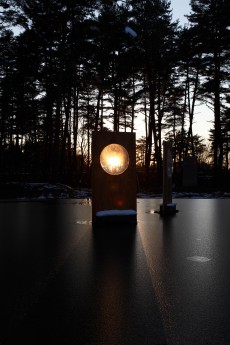 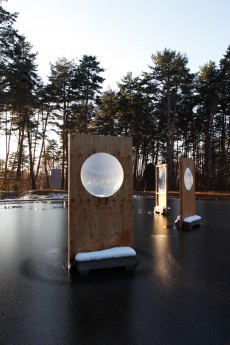