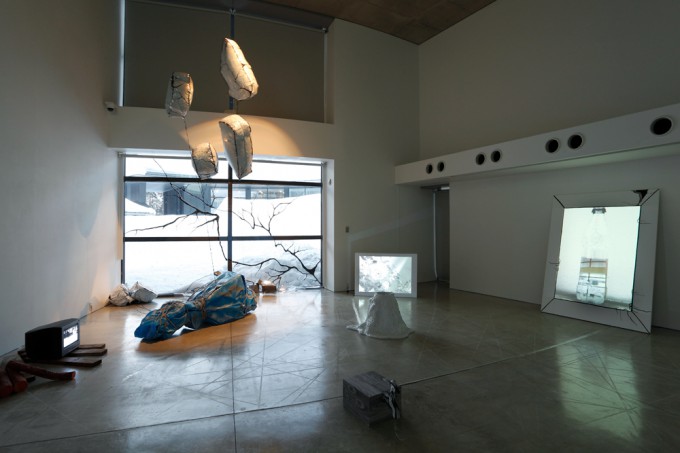 Site-Specific Animation on the Idea of Bricolage

JOO Choon Lin regards her surroundings as a canvas spreading itself before her eyes. She draws pictures directly on different places and arranges varied objects as if attempting intervention into the space, and then creates site-specific animation by shooting a series of stop-motion images. Without hesitation, she smoothly draws pictures on walls and windows using watercolors and so on, takes photos of them, removes them, and repeats the same process over again. A sense of graffiti helps her draw her own characters and phenomenon with motifs of the cheap and pop minutiae such as advertisements and scribbles that attract her attention. Then again, her quick-moving hands create a variety of objects. She processes different surfaces into data through scanning or photography, and prints them on cloths using an ink-jet printer. Using the textures of these surfaces printed in this way, she produces unique, kitschy, deformed imitations of both natural things such as trees and artificial things such as glasses or a tap.

The empathy with the streets and with a kind of DIY attitude that Joo expresses becomes clear when you learn that her birthplace is Singapore. This is a country full of artificial elements. The people there have gained their land by importing soil from neighboring countries, like Malaysia, reclaiming the sea and expanding the land, and most of the abundant trees have been planted. Furthermore, buildings are often raised and re-built within a short span, so this is a place that gets regenerated all the time, rather than building on its history. She has grown up in such a land, and says that from soaking up that artificial environment, so strongly perverted by consumerism, she feels a certain sense of fear of being so influenced by such a materialistic place.

Since her early childhood, she has drawn so much that the instincts of her hands, with the ability to draw quickly anytime and anywhere, has led her directly to her present technique referred to as site-specific animation. Besides, it is said that under the influence of her father, who himself possessed an excellent sense of DIY with the ability to create the things he needed using his own hands, she naturally gained her strong instincts of creating the entire necessaries by her hands, instead of merely living the life of a passive consumer, interested only in the easy purchase of merchandise. The imprints of her unique hands and senses inhabit her objects and drawings. One of her most appealing attributes is that she immediately perceives the characteristics of a given place and introduces into the existing environment her handmade objects, using her strong sense of bricolage and created through the “deformation” of things surrounding us.

She says that when she studied printing at the university, in the process of producing etching using copperplates, she used to change the original copperplates, after printing, into three-dimensional objects by beating them and making them into forms using a hammer. To her this technique of transforming a by-product into different forms matched up with animation greatly. And then, she bought a digital single-lens reflex camera and diligently documented her own prints and objects, as well as the entire production process. This process became a source of amusement and enjoyment, this transformation towards completion, and it has lead her to creating animations where works gradually change, she says.

Come Out and Play!, which was created in Australia and Singapore, is her first piece created using the technique of site-specific animation, which was influenced by the need to use the limited resources available in unusual environments like, for example, in her artist residencies. The technique is about regarding the given place as an unlimited canvas and repeating the process of drawing directly on it, documenting this, erasing that i.e. making the most of the location and developing the work from the specificity of that place.

Joo draws directly on anything in her environment, using everyday commodities and general drawing materials that are easily available such as charcoal and pastel. A different kind of motif, that is images borrowed from advertisements or graffiti that attract her in the city, is combined with her own drawings and modified objects while introducing surrounding views as well, and then making up her own stories. The actually existing scenes are filtered into her animations, including ordinary objects from our daily environment such as an electrical outlet, potted plants, drains and sinks as well as walls. Sometimes even fictional stories are inserted, for example a dinosaur character eats an apartment seen out of a window whose outline she fashions as a chocolate bar.

She adopts comical and cheap characters catching her attention and attempts to intervene into our daily common surroundings. In addition, objects that are created lightly by her unique skill developing from printing techniques, like etching and silkscreen printing, and drawings that appear and change on the surface of water join in the situation. In this way, her site-specific animation unfolds before our eyes in a rhythmic tempo, inserting a comical story into real space.

During her stay in Aomori, she thought about the “circulation of water,” owing to the existence of the thick snow covering the world in white and the grand sea spreading out before her, and at the same time she found the blue-colored tarpaulin attracting her attention in a completely white scenery. Because it includes the extremes of an artificially maintained lifeline versus natural phenomena like a snowfall, the “water” became the main motif within the subject “existing among different spaces,” though in her normal work she draws a pop character to play this role. Furthermore, in a snowy country, a lot of things like signboards, snowplows, cars and plants, are covered with the blue-colored tarpaulin, which was really fresh experience to her. In terms of movie production, the blue color is used as a background for synthesizing images, called blue back. Applying the basic movie technique, she chose the blue-colored tarpaulin as a screen for unfolding animation, and then tried to connect various places and times and make them seem to circulate, by flowing “water” on the screen.

The place where she worked, for both production and exhibition, is the Gallery B, which boasts of a large windowpane facing the Water Terrace. She painted cracks on the windowpane using watercolors with bold lines, as used in comic books because being influenced by the image in her mind of the windowpane breaking into pieces and the water flowing inside. Moreover, she easily created objects representing pieces of glass by sticking sheets of transparent vinyl on each other, equally through deformation like in comic books, so that she documented the way in which the windowpane would break. For the final exhibition, the windowpane was exhibited with the drawings of thoroughly broken glass, and objects of its pieces scattered below it (fig.3). In the gallery, three screens of different sizes were installed. One of them was put in the corner between the front wall and a side wall, at a height near the ceiling, and projected scenes including the blue-colored tarpaulins which she had found in the streets. It was the first time in her life she saw a variety of things covered and protected with the blue-colored tarpaulins in a completely snowy world, and she became obsessed with the sudden appearance of small blue surfaces in a white and silent scenery. Therefore, a lot of scenes including the blue-colored tarpaulins were united with each other, and the look of the undulating sea was inserted on each tarpaulin.

In addition, another series of images was projected on a rather large white panel leaning against the opposite wall, and a drawing of a picture frame, painted directly on the wall using charcoal, fringed the images. This is very much like her to draw it in a plain two-dimensional way like in a comic book, but with a unique touch. In the image, which shows a door of the room where she stayed during her residency, a cloth printed with a scene of Aomori hanging in the middle of the door became gradually covered with black water and at last bleached out into a totally white color, then faded out. Subsequently, a half-full plastic water bottle also appeared. On the water in the bottle, it was reflected how the windowpane in the gallery looked, like a nested structure: with the window’s cracks, the surface of water was coming out of the chink. After the window broke into pieces and the room got filled with water, the plastic bottle also became full of the black water. Then, quickly, switched to an outside scene in the snow. It ended up with the black rain falling in the snow scene. Like the dinosaur character in Come Out and Play! which connects among different spaces, in this animation “water” makes totally different environments meet, just as a medium does.

Finally, on a screen installed on the floor behind the window, the two Chinese characters for “drop” and “fear” made in vinyl by Joo are seen falling in a snowy landscape. Then the surface of water appears in the snowy field, the character for “fear” wavering on the surface. The technique of printing was applied to this artwork: while dropping charcoal into the surface of water from a handmade stencil template, she documented its changing shape through stop motion photography.

Aside from these screens, four 14-inch Braun tube monitors were set on logs that were carried from a different place inside Aomori Contemporary Art Centre, with her handmade logs made from printed cloth scattered around the real logs. On the monitors, there were monotonously projected images of the way in which the handmade logs moved like living things or how textures of the logs were printed from a printer.

In my opinion based on my observation of Joo’s creation process for these three months, it is to her great advantage to have the good grace to be able to quickly surmise the intricacies of environment, and to master the technique of creatively intervening in any environment, using only her own universal skills and sense of DIY. That is to say, she uses both general drawing materials easily available at any place and ordinary things found in the specific town, and also makes the most of its surrounding natural scenery unconsciously. She then connects all the dots by making her handmade motifs cross boundaries freely, and so she composes a series of stories, which take on local characteristics. It is comical and amusing site-specific animation, full of her senses of bricolage that inspires a relaxing and refreshing laugh. 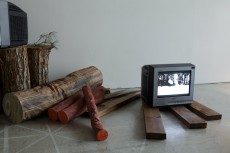 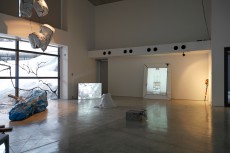 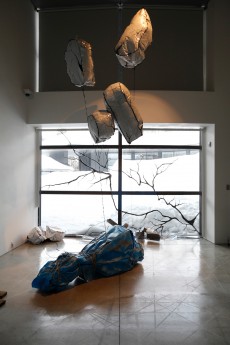 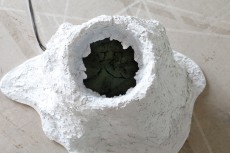 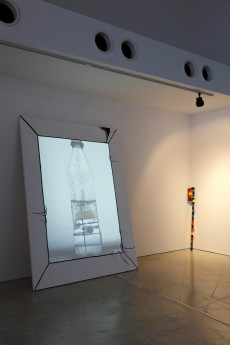 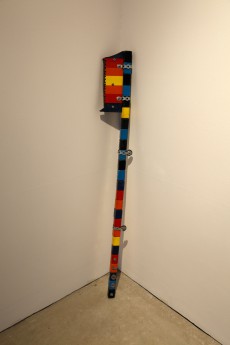 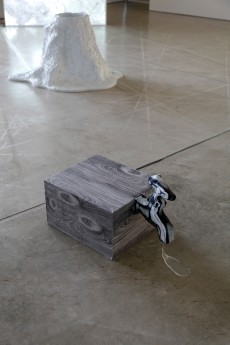 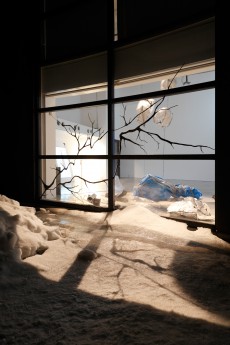 Supersensible Realm , Installation view from outside