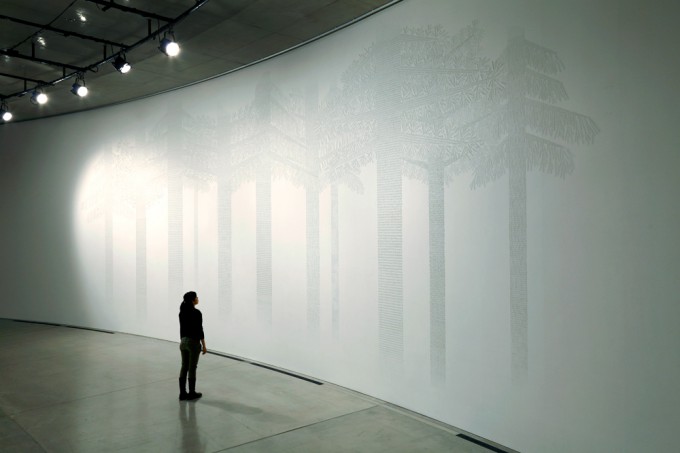 Ancient Memories and Shapes of Their Imprints

Since the beginning of her career as an artist, SASAKI Ai has created huge wall paintings using a technique she calls “loyal icing” and her materials include sugar, albumen from eggs and lemon. The nature of sugar, her primary material for this technique, reveals the nature of her work: she paints on walls under the theme of “memory” as she strives to generate a kind of “space” through painting.

Loyal icing refers to the technique of decorating and transforming something to make it special. The materials are not expected nor supposed to be permanent and the finished work is equal to the sum total of her actions that were devoted to the limited time of an exhibition. These decorations, which use only the ordinary materials of daily life, are neither aimed at being preserved nor need typical painting materials such as coloring and pigment. They remind us of decorations we often see at scenes of rituals, for example, patterns on women’s skins painted on special occasions or different designs painted using condiments and butter on temple walls during Hindu ceremonies. These customs tell us about the origin of decorations, and Sasaki associates such ceremonial decorations with her loyal icing wall paintings that are installed for the specific period of an exhibition.

As for the sugar, the main material in loyal icing, it is a familiar food additive used for sweetening foods and also a preservative to prevent foods from going bad. In contrast to salt, which is a similarly colored seasoning that contains symbolic meaning regarding the boundaries between holiness and the world or life and death in Japan, sugar is associated with fascinating pleasures and daily delights in terms of “sweetness” and “scent”. Then again it is a known chemical that operates powerfully on the brain and frequently becomes addictive. This nature of sugar is also associated with the theme of her work, “memory,” and its preservation. In this way, the meaning of the material overlaps with the ambiguity of the meaning of time: the physically short life of a wall painting produced in order to create “space” in the given time versus the symbolic eternity of the shapes which have been passed from generation to generation in order to convey ancient memories. In addition, the two are connected through the action of “decoration.”

Under the theme “memory,” Sasaki has so far painted abstract forms and patterns using universal and mythical motifs such as mountains, ships and houses. These images include imprints of memories that emotionally impacted our ancestors, and also shapes that bring to the present ancient experiences that otherwise would have been lost. In addition to these motifs, she has recently started painting trees and plants and is currently using these images extensively. During her experiences at various artist residencies throughout the world, she researched the myths, folk tales, traditional patterns, landscapes and vegetation of these regions as a way of understanding each locality so as to translate this research into her work. Through the research, Sasaki, who had intended to create “space” through her work, came to try to understand what she cannot do anywhere else except at that place: adapt herself to the locality and create and deepen a relationship with it. It was in 2008 during her residencies in New Zealand and Australia, which contain quite different history, vegetation and topographies from those of Japan, that she started painting such trees and plants. She paints trees with motifs of the actual botanical species growing in the locality thereby retaining the identity of each species even though they are arranged in patterns, in comparison with the abstract motifs without any identity that she had painted up until that time. Since then trees and plants have appeared as motifs on her wall paintings, and she says that the degree of abstraction and symbolism diminished when painting trees and forests as compared to the former motifs[1]. Trees have always been regarded as individuals with wholeness as they grow while transforming their shapes regardless of species and botanical characteristics, and thus, since ancient times, people have believed that there is something in seeing trees that has relevance, in realizing the wholeness of life or the world. It is this wholeness that people cannot always grasp and can only imagine. The nature of trees, in that the individuality is equal to the wholeness, and vice versa, may enable her to paint individual shapes.

For Remained forest, part of this exhibition, she chose a specific group of trees, that is, the trees buried during the last glacial period, as a motif for the wall painting. During this period, approximately between 80,000 to 20,000 years ago, these trees became submerged and buried into a deposit of peat, due to the drastic environmental changes taking place in the extremely cold season during the second half of the last glacial period. There exists, along a kilometer along the seashore of Dekishima in Tsugaru city, Aomori prefecture, a few thousands trees, including 28,000-year-old conifers, that crop out due to the impact of diastrophism. The fossilized trees are remnants of the previous earth with boundaries between the sea and the land, different from the present, and they tell us of time flowing on a large scale, like that of the movement of the earth’s crust. Though we can only partially understand, with the limited knowledge we have in one short lifetime, these kinds of huge changes occurring in the grand sweep of time concerning nature, nonetheless these changes can have a strong impact differently on the work and characteristics of the local people for a long time. From these small imprints of time we get a glimpse of eras we cannot experience and also perceive the unseen power behind us.

Eleven trees on the 6-meter-high white wall were created using the technique of loyal icing and were done in a very formal and decorative manner, recreating some specific species of trees buried during the last glacial period, such as the Japanese red pine, the Yezo spruce and the Picea. Each trunk is covered with a different geometrical pattern, and the branches stretching up and down symmetrically are densely filled with patterns of leaves. The strength and weakness of the painted lines, arising from a difference in thickness of the materials, along with the arrangement of the trunks, gives a strong sense of depth within the scene, so that the trees seem to follow one another in succession into the white background. Equally, both the upper and lower parts of the trunks get thinner towards the ends, helping the presence of the trees melt into the white background. Consequently, the actual wall, that is, the substance of the background, is transformed into an immaterial space spreading in all directions. The effect of these specific motifs are strong: with the extreme planarity and patterning of individual motifs, with the depth of the whole panorama, the gradual disappearance of the upper and lower parts, and the white tone on the white background, the forest becomes silhouetted as if in a dream. It is the lost forest leaving only fossils and also looks like an ancient dream of the earth.

The decorations can give some value to the “space” or transform it through the form, rather than by representing the identity or the expressions of the artist. The intention that a wall painting should be decorative means that the artist attempts to turn the work into images associated with our daily lives and their details, which might be regarded as a kind of orientation towards anonymity, and not as his or her free expression. But still, as for Sasaki’s symbolic images that she creates by the crystallization of her personal experiences using modern materials while she looks for imprints of ancient memories and orients herself to those shapes, there is some intention of formally representing the world in a new way. It seems that she tries to remember such vivid and emotional experiences and to find other ways of passing them from generation to generation. On the other hand, her drawings show vast and vague gray scenery as a whole but they also retain individualities in their details, revealing different consciousness. For Sasaki, drawing is as natural as breathing, and the drawings keep a kind of physicality and individuality in contrast to the large wall paintings. If the wall paintings are likened to grand stories, the drawings seem to tell a short story each. From this perspective, it can be said that both the drawings and the wall paintings met in Grayscape-Sea.

Grayscape-Sea (2007), an integral part of this exhibition, is a drawing work consisting of 19 pieces drawn on thin tracing paper in hard pencil. As shown in the title, the light gray covers over a third of the lower part of the drawings and it looks just like a gray seascape. The gradual disappearance into the white background may remind you of Remained forest mentioned above. However, as you approach the work, you can see that the vast and vague seascape is made up of a throng of innumerable trees and plants that have been finely drawn. Sasaki says that the work is derived from a strong impression she had of the forest scenery she encountered during her stay in Australia. This primeval forest consisted of eucalyptus trees, misting the air into pale blue with its strong scent that comes from the volatile sap. According to her, it looked like the blue surface of the sea. But what is drawn in the work is a different type of endless plants and trees. Situated in front of the wall painting that is composed of formalized images, the drawing suggests that each individual’s experiences and memories, or thoughts and feelings, are united into a collective memory through an archetype.

When looking at scenery, we don’t merely sense it through our sense of sight: we feel its overwhelming vastness versus our tininess and perceive it through our sense of smell, and absorb the energy of nature through our sense of touch. The experience of communing with a landscape can be taken in through different parts of our body, and sometimes we appreciate scenery empirically. Sasaki, who has intended to create a kind of “space” in an exhibition hall, synthesizes experiences that are perceived within us intuitively or by the sixth sense, when faced with such a variety of shapes in the world. She separates the shapes from the physical world, and shows them to viewers as scenery of mental images targeted at our thoughts.

While viewing the wall painting, viewers have to move around because of its large size. As for the drawing work, we are equally advised not to stop at a certain position to view the work, but to vary our distance from it, so that we can see it from multiple angles. Such movement creates an experience of appreciation, arousing our physical senses and feelings within that space. It is just like when we stroll around the forest of memory. 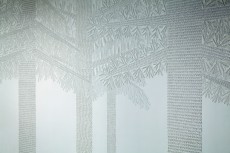 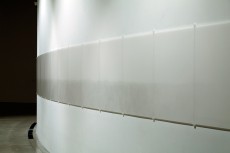 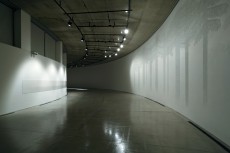