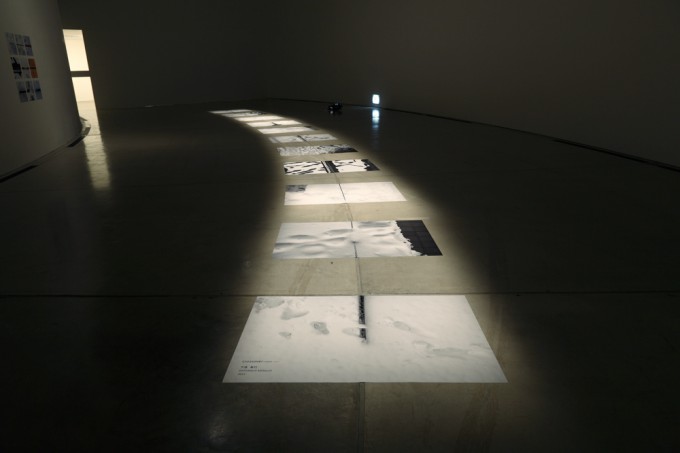 SHITAMICHI Motoyuki is a traveling artist. In a literal sense, he is a “traveler-type” artist who creates works while staying and living in different parts of the country, but what is more appropriate to his case is that we can grasp his creative activity more clearly when we compare it to “traveling.” Types of traveling could be roughly grouped into two kinds: one is that the final goal of the traveler is to reach the destination he has planned, and the other is that the traveler does not decide on his destination and appreciates being on the road, seeking encounters with town, people and things in the process of movement. Shitamichi pursues these two poles depending on the nature of his work. If the former type of activity/work with the definite destination (subject) is defined as “A-side” (of a record or CD), the latter type is defined as “B-side,” in which the target is not specific or the process itself is valued of observing unexpected by-products he finds as he goes towards a certain target. It seems that Shitamichi travels back and forth between the A-side and the B-side keeping a balance in order to supplement his activity of crossing the two poles. For example, he produces B-side type of pieces in the process of aiming for the A-side.

His accumulation of things that he has collected in “traveling” constitutes the main element of the formation of his works. His search and accumulation are wide-ranging: In Bunkers, war ruins scattered throughout the country are photographed, torii depicts torii (shrine gate) that remain outside present borders of Japan, Sunday painter shows his grandfather’s paintings, which he traveled looking for, and the space with them. Sunday creator displays the collection of things produced continuously by nameless creators, and in bridge, snapshots he took at different places show items of minimum structure like a piece of board connecting boundaries found everywhere, which he defined as “bridge.” At first sight, he seems to be pursuing disconnected things in a distracted way, but there are three points in common as in the following concerning those which he has collected with his sharp observing eye and curiosity.

I’d like to discuss the subject from the above-mentioned assumption.

Bunkers, which was published in 2005 and acted as a trigger to draw attention to his work, captures the present state of war ruins such as a pillbox, artillery battery, and aircraft bunker built for military purposes. Some bunker is now used as someone’s dwelling, and the base of some artillery battery has been transformed into a flower garden. Thus, by capturing situations which continue to exist as revived scenery remarkably transformed after being totally deprived of the military function, he visualizes the fact that the wartime of only some decades ago and the present time are connected adjacently, or he expresses clearly human originality, creativity and vitality that arise out of necessity. Presenting the landscape, he makes us think of a diversity of histories and stories behind the scenes.

The torii series contains photos of existing torii, which suggest that Japanese people once lived outside the present borders. They are not necessarily intended to display Japan’s history of conquest, but they provide a sign that Japanese people lived there for various reasons like Japanese emigrants who formed a Japanese quarter. One of the torii left with the surface painted snow-white is surrounded by Christian gravestones while another torii is pulled down and used as a bench. They are thus given totally new functions and values by people living there today and make new landscape.

As “war ruins” and “torii” collected in Bunkers and torii respectively have stayed at the same place over many years, their powerful presence appeals to us whatever conversion might be made. Each is definitely an A-side type of work, because he intentionally searched for and captured its great existence located at a specific place. Although none of them is a well-known monument, they have the power of existence, and are made into artworks following the orthodox rule of photography, that is, to make the subject into a monument by pursuing it as the target.

On the other hand, his important B-side type of work is probably RIDER HOUSE . When he made a trip around Hokkaido for the production of Bunkers, he stayed at a “rider house,” a lodging for bikers, which he thought was interesting and began its collection of pictures. What interested him was, for example, that each rider house had its own established rules or there were encounters with sojourners from different backgrounds. As the situation itself was interesting, he took snapshots of people he encountered at rider houses, took pictures of their lives and saved them up behind his job of photographing war ruins. Groups of such photos of RIDER HOUSE, which captured the hidden side of the trip for Bunkers, show us vividly of Shitamichi’s daily life at the time as well as the riders’ lifestyle. This is exactly B-side type of work attracting us by its behind-the-scenes appeal.

For the exhibition at ACAC, crossover, a new residency production in Aomori and bridge that was produced last year and reconstructed anew have been combined, so that his recent B-side type of activities are in spotlight. What the two works share in common is that certain acts of people have given them a form and meaning. As to crossover, it has stemmed from his experience in the past when he found a road and took a photo of that road, which was formed by traces of people’s acts─people and animals walked back and forth along the path where there was originally no road, and grass stopped growing. The surface of the earth began to appear and finally a road-like strip of ground was left there. As an extension of this approach, he collected, while walking through snowy places in Aomori, such a road as formed by footprints around a small bar set up on a lot between a supermarket and the street or at borderlines between two different parts of land which people stepped across. When people step across a bar partly buried in snow, their footprints are left on both sides of it. When other people see those footprints, they begin to cross it there, and as a result, what appeared to be a path becomes a real road. Meanings and functions are given through the engraved traces of people’s acts.

In order to position the bar in the center, Shitamichi held his camera right above it, and photographed roads formed by traces and collected them. Rather than searching for the specific site of such a road, he must have discovered them in the process of daily living. Though it is possible that they exist all over the place, it is difficult to actually look for them, because their conditions are constantly changing: they appear someday but disappear some other day depending on the circumstances of snowfall and snow removal. This act of cutting out and collecting those roads, which he happens to encounter in his everyday life is quite a B-side type of work.

As to his way of exhibiting what he discovered and collected, he pays attention to the smallest detail. Although, on most occasions, photos are framed or mounted for display on a wall, he decides on how to display them depending on the quality of the subject that he has captured in the photo. For “crossover,” in which “roads” discovered in his travel are photographed by his digital camera like snapshots, eleven pieces in total are printed in monochrome of the size 123.5x83cm and pasted directly on the corridor-shaped floor of gallery A with spray glue. And a projector showed 35mm positive film slides, which captured the moment when a person seen from the front stepped over a bar, in a small size on the wall.

In the inner part of the exhibition room is bridge. This collection contains what he defined as “bridge,” those of minimum structure, which can be seen everywhere connecting this side and that side. Shitamichi noticed them while traveling around all over the country on his motorcycle from March through August 2011. They are, for example, a log put across a waterway between the footpaths of fields, bricks and concrete blocks placed quietly to remove the level difference between a garage and the road, or a board to moor a boat alongside the quay. Though their roles present an infinite variety, he calls the minimum structure connecting little gaps “bridge,” and has found delight in an amusing quality in the landscape transformed by modest creativity coming out of necessity in our daily life. A total of 280 pieces of “bridge” is printed in size A4 along with the shooting date. They are arranged in a single horizontal row on all four sides of the wall in the exhibition room, and go further across the passageway, washroom, etc. pasted with spray glue on a line of the same height. On a table placed on the center of the exhibition room are a map of Aomori city with a plot of roads discovered by him, and a map of Japan with marked traces of his motorcycle tour to photograph “bridge,” which took him about half a year. Here, his intention of putting crossover and bridge in the same category is explicit. The medium that Shitamichi mainly uses is photography, but by displaying items like maps, which remind us of his trips as object, he tries to present his works from all angles so that viewers can picture a story behind each photo of “road” and “bridge.” His way of spatial composition to value this sort of process and his choice of quantitative and improvisatorial merits of a digital camera show a great deal his B-side type of attitude. What he would not do is to select only photogenic “road” and “bridge,” enlarge them, put them in frames and arrange them on the wall in neat order. His way, on the other hand, seems to be “loose” or “aggressive” at first glance, because, for instance, he pastes his works directly on the floor or continues pasting them on the walls on and on. By boldly putting what is usually thrown away as a surplus along with photos, he encourages us to search for our memories hidden behind surplus parts including such discoveries.

The fun that the B-side type of world presents to us is not to rush to the destination on a superhighway, but, to make various unexpected discoveries while moving around lazily along small roads (let me share his name Shitamichi: shita=under, michi=road with him), stopping off at different places to enjoy changing landscape. No doubt it is important for us to push forward intently to the definite goal, but it is also indispensable for us to have time to make a detour to experience and absorb what we did not intend to do. Keeping a balance by smoothly connecting the A-side with the B-side, Shitamichi is intensifying his expression slowly but steadily. 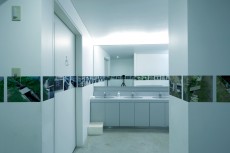 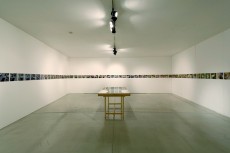 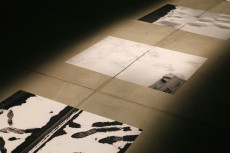 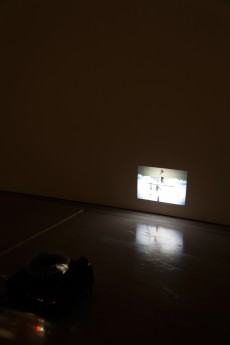