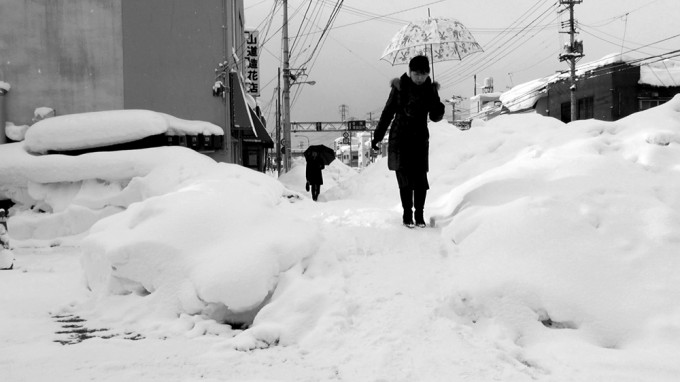 Sounds to See and Images to Hear

Impressive images shot by a fixed point observation are shown in the work Moments, in which few explanations are inserted and little camerawork with suggestive meanings is employed. According to Belantara, she stood in a street holding her camera up to capture patiently what was happening there, like KON Wajiro, a founder of modernology, used to sit at a street corner and record what he closely observed about passers-by. In front of the fixed camera, cars, people and snowballs quietly go past. Soon after some sounds are heard from where there is nobody, someone steering a sled or walking thrusting the umbrella into snow appear between an opening in the snow wall, and are swallowed up behind it. Though they are reflecting images of the town scenery, some sounds diminish and sounds specific to snow are intensified─sounds of footsteps threading the snow hard, snow shoveled, snow falling, snow thawing and snow blowing hard against something. Often only images are shown in silence. In the scene showing a truck dumping a huge chunk of snow into the sea, only burbling sound of melting snow is heard. Those restrained sounds and black-and-white images that seem to have lost colors reveal the scenery of a snowy town more vividly than its actual scenes. Thus this piece brings about a set of mental images of the scenery of the town reflecting its stillness, how people live enduring snowstorms, and how residents have their freedom of action restricted by snow.

Amanda BELANTARA, who studied visual anthropology, in which ethnology and cultural anthropology are researched by using images, sounds and occasionally smells, views present-day society and culture in an audiovisual perspective, and inquires into people’s lives and activities from that angle. It means that she approaches the subject by recording lives and activities of people living now and there as faithfully as possible through sounds and images. In this meaning, her “interest in visual anthropology” could be a clue to understand her work. On the other hand, her approach to collect and present them is not so much to explain, analyze or express her intention clearly in a specific framework as to get feedback as a collective representation of empirical memories of the subjects and viewers on her cut-out sounds and world of image. According to Belantara, “ ‘allocation of acoustic arena resources mirrors the culture’s values’[1] means that we listen to ‘what’ and ‘how’ as the product of a cultural process,”[2] and she focuses on sounds produced through people’s acts in particular along with images to cut out the world. In this case, sounds get involved in her work in several contexts: one is to reconstruct and present some situations and aspects in the society by means of collected sounds and images different from written texts and language. Another is that Belantara herself uses audiovisual information as a means to understand local communities and residents, and the third is to explore how people respond to “sounds” and research on their different responses and how sounds make impacts on the unconscious domain.

Her video work Lifelibrary (2007) depicts comprehensively the existence of library through sounds. In the circumstances where people should keep quiet, sounds are audible from all quarters: whispers like natural sounds, rhythmic sounds of doing such a routine job as putting books back to shelves and lending of books like an efficient skilled craftsman, loud sounds of footsteps, monotonous electronic sounds coming out at the time of handling text materials, sounds of turning the pages of a book, and sounds of writing with a pencil. All those sounds coming out of the specific place of a library are made by people who act and behave according to regulations, and are collected through special microphones. They are dubbed onto images showing different situations that are happening in the library. They are not sounds recorded naturally and neutrally by the video apparatus, but they sound with a feeling of physical closeness as if we were listening carefully to that sound only. What is reconstructed here is not a library as facilities but a comprehensive “image of library” which people get involved in and perceive. As in the folklore of “blind men and an elephant,” each sound fragment as material does not tell us independently what is happening there and where it is, thus not revealing the whole. However, each sound is the actually recorded sound of that part and we realize it, and when they are all combined, we are able to capture a clear overall picture accompanied with something inaudible and invisible.

In contrast, Mimi ga Kyutto naru / Ears are Dazzled, touched by sound (2009), which was produced in the artist-in-residence program at Akiyoshidai International Art Village, shows that sounds can be a means to know of an unknown place. In the case of Lifelibrary, the subjects to be filmed had already been decided and were interviewed beforehand. In addition, the place where the research was made was “library,” the place where its knowledge/recognition could be shared. In the Mimi ga Kyutto naru piece, on the other hand, the materials for the subject to be shot and recorded are discovered from the description of everyday sounds made by locals in this unknown area. What is more, sounds verbalized as “sound diary” are first collected in this work, and by combining this inner soundscape expressed in words with general, actual sounds and images, the sound and image seem to be connected through a medium of words. Cinematic cuts and camerawork make up a story in this verbalizing process, and it makes us aware of a viewpoint at a distance “looking” at lives of people, who are the filmed subject. While the moving image causes a sense of distance seen through someone’s framework, audible information we actually hear gives us a feeling of physical closeness. This gap between the two, image and sound, makes us feel that the viewer’s perception and the description of sounds that people in the moving images provide do not always match. Since this disparity stems from each person’s history of life and experience, sound-related memories could express something delicate.

Kinoko-phonography (started in 2010) conducted as a project/event might have originated from her interest in different responses to those sounds. It is a project as well as an event to collect sounds all over the world, listen to them together with all participants to discuss. What is interesting here is that Belantara has collected sounds based on two categories: free application and application with themes. The former collection probably depicts sounds and situations, which people pay special attention to in everyday life in the case of Mimi ga Kyutto naru, and the latter is a collection of sounds that depict soundscape on a specific topic and their different impressions, as in the case of Lifelibrary. Here, you could realize Belantara’s differential kind of interest in different responses and impressions of sounds as well as her interest in actual sounds of all kinds.

Moments produced at ACAC this time is also her work depicting Aomori residents’ lives through sounds and images. With “snow” as the focus, however, this piece seems to be an aggregate of situations and impressions viewed through images and sounds. Belantara did not intend to take up snow for the theme from the beginning. As she did in previous pieces, at first she began to interview people asking them sound-related questions, about accounts of soundscape and their impressions of the area as a means to learn about the district. However, in Aomori hit with the heaviest snowfall they’ve had for several years, many people talk about snowy scenery, and in fact, when she visited such places for inspection, all she saw was the ground carpeted with deep snow and she found nothing else. People shut themselves up quietly in their houses, there is hardly anyone in the street, and only traces of some people’s activities are left on the snow. Even if there were people’s activities going on, they would be hidden behind tall snow walls rising skyward. She said that the city of Aomori at this time when everything was hidden under snow was exactly “traces of scenery.”[3] Probably because she kept shooting the scenery of town standing at a fixed spot with all her camera and recording equipment on her shoulder at the time of the coldest and severest snowstorm, the sounds we hear are not for the soundscape formed by someone’s impressions and responses but they have more direct impact on us, so that we can feel her physical sensation strongly in her perspective on sounds, though the moving images are faithfully depicting the scenes.

The questions that Belantara asked local people are limited, intentional and directional. Nevertheless, the completed work turned out to be something different from the materials she collected during her fieldwork. I think that it is partly because her approach to the choice of the subject and the construction of image composition is empirical. I believe, on the other hand, that while the subject is tape-recorded through the medium of sound description objectified in this work, situations are comprehensively depicted with a feeling of closeness, because not only the soundscape as someone’s experience but also her physical aspect is involved in there. It is soundscape as a subjective experience, and it seems that the landscape has been dissolved and reconstructed through her physical experience.

Images, in which incidental moments are captured by a camera fixed to  wait patiently for an incident to happen, are cut out as a story, but they are documentary in that the situation is filmed then and there. She does not mean to abstract the world through a camera, but tries to be neutral as to how far she should be from the subject or how images should be presented. On the other hand, it is the very reason why the disparities between images and sounds change the distance between the image and the viewer. It is also the reason why the work makes us feel the artist’s freezing body, and beautiful picturesque images framed before our eyes are given a double meaning of physical sensation and snow. Those images and sounds, while playing complementary roles with each other, show their situations separately to suggest strongly that there is something invisible and inaudible behind them. It seems that innumerable eyes, ears and sound sources are coming across at the point where the screen and sounds contact each other.