Boarding the last plane to Osaka at night, I got there and changed to an eastbound express bus. Outside the window, I saw scenes flying past---advertising towers of motorcars and tires, service stations, supermarkets, and streetlights shining white and orange. The view from the highway looks alike everywhere, but I can’t help looking out the window whenever I go on a highway. I don’t know why. The scenery occupying a hilly area like a fortress shining in the dark is actually a group of high-and-medium-rise buildings in a vast residential area adjoining to the Expo Park. It shows a good contrast between the surrounding greenery of trees and concrete buildings by day, and by night it turns into remarkable artificial beauty of light and darkness. There are regular crisscross lines of floor levels, identical windows of the same size, and a series of living space standardized as 1K, 2DK and 4LDK. They make an inorganic and impersonal minimal environment. However, this is only a viewpoint from the outside. The light from each window demonstrates that there is the same number of households as that of lights. There may be someone reading a book lying on a couch, or listening to loud music wearing headphones, or sharing hot soup with family. While feeling vibrations of the bus and thinking about how they were living, I drifted into a pleasant sleep as usual. Senri New Town, where YAMAMOTO Seiko was raised and currently lives, has developed as the first Japanese large-scale new town after the war. It started as a town in 1962, and after eight years, further development was planned to host World Exposition in Japan whose theme was “Progress and Harmony for Mankind.” It is one of the most symbolic sites representing rapid economic growth of post-war Japan. Yamamoto was born in 1981 in the times when the movement opposing the Japan-US Security Treaty and Vietnam War had ended, the Berlin Wall collapsed, and the world was shifting the helm to the termination of the Cold War, and the society has been in the process of globalization. Yamamoto probably looked up at the sky over this town everyday, vaguely feeling the signs of turbulent world at home and abroad, which she was not wholly aware of.

At ACAC, Yamamoto produced three pieces, “independent empty,” “the empty shadow” and “peeled light.” These works installed near the entrance of the gallery are possibly regarded as a single installation sharing the space, but each of them is considered an independent piece of sculpture. Three words contained in their titles, “empty,” “independent” and “peeled,” were chosen as having sculptural concepts. In the first two works, Yamamoto has developed a new method that she has been tackling recently. She cuts floor plans out of advertising leaflets you often see in newspapers, and after laminating them for reinforcement, she joins them together, so shapes and scales can be changed easily. “Independent empty,” in which floor plans are connected so as to form a square of 5 meters, is suspended from the ceiling just like a netlike wall standing at right angles to the concrete floor. The wall made of delicate connecting lines does not appear to be hefty, and the plastic surface shines delicately by the reflected light of a chandelier, through which the scenery of the other side is visible. As opposed to the monochrome surface, the other side is colorful with different colors of printing ink. “The empty shadow” is also a piece in which floor plans are connected linearly. It is suspended from a height of about 4 meters above ground, and its shadow is slightly shown on the wall of the gallery. Following a line extending from the entrance to the interior of the gallery with your eyes as if you were in a pose of looking up at the sky, you might feel the mobility of the line growing endlessly. In “peeled light,” eight Petri dishes are placed on two thin fluorescent tubes hanging from the ceiling. Each dish contains a cutout film in a three- to four-centimeter trapezoid shape whose color is different from one another. Yamamoto made these films by copying photos of collective housing she photographed at night onto transparent sheets and cutting them out. It can be readily imagined that this task took her a lot of time and workload. Each piece of work shows, however, no sign of handwork and thinking process as well as individuality. Standing for a while, I can immerse myself in the beauty created by the contrast of light and shadow, but it is difficult to understand and respond to what all these three works intend to convey to us. I approached them to watch more carefully, and the moment I noticed that they were floor plans for advertisement and windows of apartment houses, I felt my imagination stretching globally. Such things as eternity in emptiness or our desire to watch what is invisible are the strength that Yamamoto expects in sculpture and what comes beyond the weight and texture of the material. That is what exists there and promises us freedom to deal with the object. Containers or vessels fulfill such quality, and floor plans that are now empty symbolize “container” in which some people lived in the past and some people will live in the future. The make-up of an aggregate is associated with an aspect of a town in which dismantling and rebuilding are repeated. It is similar to a monument presented to us to think about a present-day city.

The pursuit of “container” as an object that holds something has continued unbroken for long since the experience of using “container” itself in the past. In “phenomenon-chaos” in 2006(1) (fig.1) and “Untitled”(2) (fig.2), she depicted the process of how earthenware, which is dried without bisque firing, is destroyed by water erosion. Also in “ZERO”(3) (fig.3) produced in the same year, she replaced broken containers with stainless steel mesh to restore their original forms. The work is somehow performance-related, but the presence of the artist is entirely eliminated here again. Its story is told not by a piece of sculpture (an object) existing there but is left for the viewer who confronts it. Her concern is not “container” itself but her interest lies in what is latent, how it exists and how it is appreciated. According to Yamamoto, she wants “anyhow to lick, touch and confirm” individual existence that is becoming vague by losing physical presence due to standardization.

Richard SERRA’s work “Tilted Arc” made in front of the Federal Government Building in New York in 1981 caused a sensation regarding the issue over the public nature of national projects and the relations of architecture and arts in city space. One artist makes a huge iron sheet soar high above the center of the city, while another tries to reveal the present state of the city wrapping it in soft sheets of plastic. After the lapse of 30 years, are we still floating precariously in unidentifiable society? “Container” that Yamamoto thus creates has jelly-like delicacy; you scoop it but it drops off, and it remains to be neither solid nor liquid. Here the container exists independently carrying such delicate beauty.

(1) Water drips from the ceiling into one container and makes a hole in it. The container gradually loses its balance and is deformed. The other container is filled with water directly by the artist. Sudden expansion of clay explosively breaks it.
(2) One hundred unbaked containers are placed on an iron sheet, and water is poured into each of them. They gradually break and water flows out. On the iron sheet appear bright yellow (rusty) traces of water.
(3) Water is poured into a clay container on a sheet of paper, and it breaks. The broken pieces are traced with a pencil. A paper pattern based on that outline is cut and remade with stainless steel mesh. 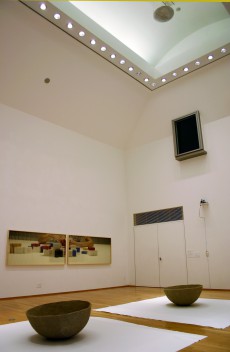 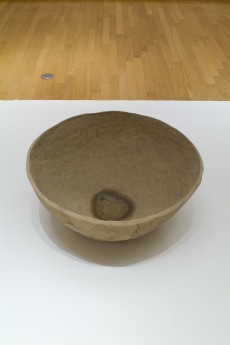 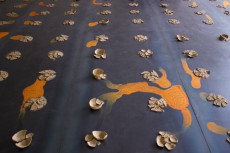 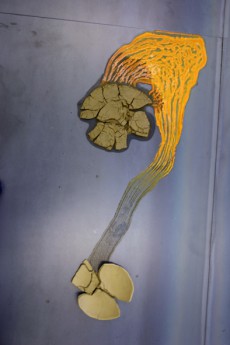 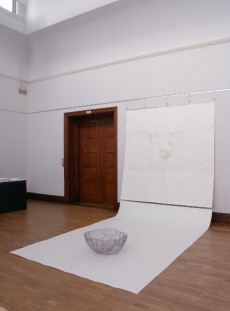 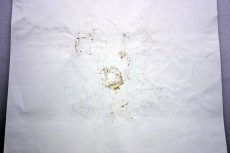 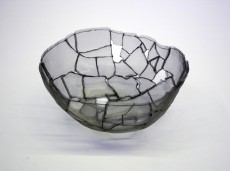