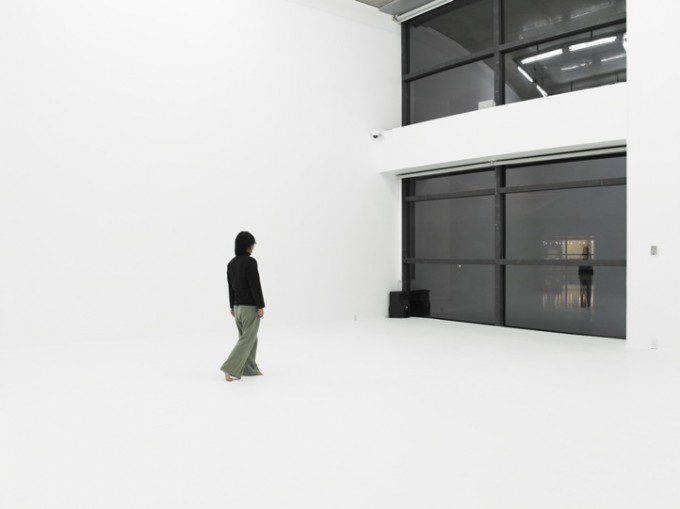 “I want to create works in which viewers can physically and perceptually feel sound with their whole body,” says Angie ATMADJAJA, and such unique orientation around music underlies her creative activities.

Since childhood, Atmadjaja was educated to be a pianist, and later she turned to instrumental and electronic music composition. As she was interested in acoustic space and phenomena, she studied sound art that combines technology and art at the University of York. In parallel with such study, she worked as a sound engineer and composer for dance and stage performances. While collaborating with dancers and choreographers, she came to understand that they perceived sound with not only their ears but also using their whole body. Consequently, she deepened her interest in acoustic space as giving physical and integrated experience. Backed by basic standard education in music and collaboration with people in other genres, she has concentrated on a career as a sound artist, currently expressing sound space that is physically tangible and interactive based on art and technology.

This time, Atmadjaja began to work with thorough understanding of the spatial features of Gallery B where she was to exhibit her work. In order to create an acoustic space, she observed the space objectively and conversed with the place logically to find out how she could respond at the horizon of sound. After having looked into the approach to architecture of architect ANDO Tadao, who designed ACAC, and his architectural works up to date, and thoroughly understood his concept of ACAC, that is “invisible architecture,” she made her sound installation as if it were a poem composed in response to that concept.

The installation made up by Atmadjaja is exactly “an invisible work.” At first glance, there is hardly any explicitly visible object. Only dazzlingly white space spreads, and all you feel throughout your body is a single tone of heavy low-pitched sound filling the space. (fig.1) Speaking of visible things, they are the white surface of an ordinary concrete floor, a speaker installed in the corner of the wall on the left hand side and a pane of glass facing the Water Terrace, a line slightly drawn at eye level on the wall, and two pieces of models placed in the alcove outside the exhibition room. (fig.2, 3, 4) That is all you see at a glance, but when you get yourself immersed in the space as if digesting your feeling slowly, you will gradually perceive remarkably diverse elements.

When I was at rest in the room, I felt that I heard some heavy low-pitched sound, but the moment I began to walk around on the white floor, I felt that the volume and tone of the sound were changing to my movement. For instance, when I approached a small opening at the inner part on the right hand side of the room viewed from the entrance, I heard very loud low-pitched sound reverberating not only in my ears but also throughout my body, but when I moved back towards the entrance, all of a sudden the sound was no longer heard and there was stillness. Moving towards the wall on the opposite side in front of the pane of glass facing the Water Terrace, I heard sound becoming loud and low in turn, constantly changing. Further walking along the wall to the center of the room, I came to a certain spot, and in a second, all the sound fell silent. What I found out while moving around was that when I was standing still somewhere, I heard some sound (or heard no sound at all), but once I began to move, sound changed to my movement. I became gradually aware that the floor surface was subtly uneven as if responding to the pitch and loudness of sound. The floor surface was slightly irregular: delicately elevated at the spot where sound was loud and slightly sunk where sound was quiet. A line that was drawn vaguely on the wall was hardly seen, but as I approached the wall, it became dimly visible and when I moved, it looked gently swinging up and down to conform to the subtle roughness of the floor surface. And at some distance, it disappeared. Such differences in sync with the change of sound were visible and softly expressed. Though they were all small changes, the moment I was wrapped up by this stillness, I began to perceive chain reactions of various phenomena.

In short, Atmadjaja created “sound topography,” which you could perceive throughout your body with five senses, so that the characteristics of this space would be amplified. First, she set up 90cm grids all over the room with 104 intersection points. Transmitting sine waves of varied frequencies, she measured the sound volume and amplitude at each intersection point using an audiometer. Out of this measurement, she concluded that 56.7Hz frequency enabled her to produce sound topography with the most interesting variations for the space. Sound reverberates on the floor, wall and ceiling vibrating air, and reaches our ears for us to perceive. A characteristic found in sound is that it echoes well on materials with the hard surface, while on things with the soft surface, sound is likely to be absorbed. In short, the reverberation of sound differs greatly depending on the size and form of the space as well as the surface of different materials. Also the volume and amplitude vary according to the measuring spot. Atmadjaja measured what sort of acoustic properties the Gallery B had, and converted the volume of sound into the surface of the floor so as to visualize sound at each intersection point. The output came from a speaker with the sound source of 56.7Hz sine waves. The title of the installation, “442.42m3 56.7Hz TILT,” indicates clearly how the characteristics of the space prescribed the work. In other words, by inserting 56.7Hz sine waves into the space of the Gallery B with total capacity of 442.42m3, she created successfully sound topography with varied tilts. With the output from a speaker whose sound source was solely sine waves of one wavelength, sound was strengthened where wave patterns in the similar courses hit each other, while at the spot where those in the reverse courses ran into each other, sound became weakened. Making use of the properties of sine waves that reverberate in the room doubling the loudness by increasing strength at some places and reducing it by decreasing strength at other places, she produced sound topography.

As described above, Atmadjaja’s acoustic sculpture is extremely site-specific. With her observation and interpretation of the given space, she creates an acoustic space that appeals directly to the viewer’s body and perception by bringing out latent acoustic features of the space. It is communication with the place and construction of the space in a perspective of music.

In addition, her character as a genuine musician was revealed in how she built up relations with visitors. During the exhibition period, she watched the Gallery B carefully from a lounge on the opposite side of the Water Terrace when she had time, and observed visitors’ reactions to her work. When she happened to see a visitor puzzled by the work, she spoke to that person to explain her intention. She sometimes experienced the work together with visitors as if in a guided tour, and at other times, she listened to their opinions and made a totally different acoustic space using the output of plural sine waves to have them experience a different space. Thus, she presented different ways of experiencing the work, depending on whom she spoke to. Probably this comes from her experience of playing the piano before the audience, composing dance music and doing interactive activities similar to live performances in which she was always conscious of the audience’s reactions. You might say that after all her DNA of an orthodox musician has stimulated her to create sound installations.

Speaking of artworks, there are many pieces, which we can appreciate only when we understand the context or background of their makings. As for her work, on the other hand, we can purely enjoy it as our primitive bodily experience even when we have no knowledge of her work and context as a premise. It is true, however, that if you had knowledge of sound art, you could see things in the work that would not have been possible otherwise. Nevertheless, the capacity of her work allows everyone to enjoy it in their own way. What is more, her way of understanding the given situation, analyzing the space in view of sound, and constructing a new acoustic structure interactively may be considered architectural.

Today many artworks emphasize contextual meaning, but this installation, which we can experience with our body and calmly concentrate our senses to perceive, provides a good opportunity for us to think about fundamental quality of contemporary art. This work made us recognize anew the importance of our experience, which could be replaced nowhere else. 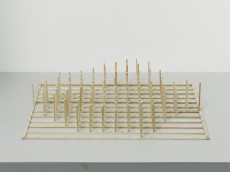 fig.2 Conceptual model with the sound volume converted to a floor level. 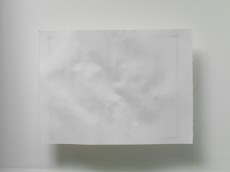 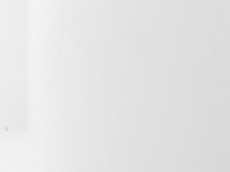 fig.4 One line drawn on the wall.