Creating a place for signs

Just because parent birds are constantly bringing food to their young, it does not mean that they are raising their babies out of love. Parent birds are born to feed living beings with big eyes and mouths wide open, which they happen to see in front of them as a result of their certain action and regard them as their offspring. Therefore, even if eggs were secretly replaced or the young of a different species bigger than their offspring were waiting for food with their mouths wide open, parent birds would feed them like their babies as if nothing had happened.

It is said that “Naturplan (plan of nature),” the title of KANO Tetsuro’s work, is quoted from a book written by zoologist Uexkull.(1) Every living creature has its own senses, and using their senses, they convert information to their convenience to interpret their surroundings, and take actions based on it. For example, a mole regards a fallen tree blocking a road, an obstacle in human life, as a cozy residence, and the tree also tempts ants’ appetite. Every living being has come to have their shapes, functions and organs through “natural design,” and in order to live in their cycles, every living creature senses their surroundings under the control of this natural design, and takes programmed actions.

Kano’s works are known for using animals and plants. He began to use plants in “Weeds,” one of his early works in 2004 (fig.1), and the process of growing plants was included. From “Respective garden” (fig.2) in 2009, bantams were added, and the number of coincidental factors in his work has increased so as to make more organic changes in his work.
“Naturplan” is the title that he has used these several years for the series. (fig.3) Kano talks about how he came to introduce birds and plants in his work: when he was learning of space-related functions, values and meanings, he became aware of the fact that everything was basically designed in the interests of human beings as well as the fact that a crack in concrete, that was a damage, considered negative to humans, but it could be “a place for plants to grow.”(2) This explains that Kano introduced them in his work as the medium for him to find out different significance and values in existing space.

In Kano’s installation, simple materials such as nets and poles, which are available at a home center, are collected and arranged for composing a place. The place appears to be filled with drawings made on three-dimensional space with colorful materials spread over the place. And animals and plants are introduced in that space. Apples placed in the work go rotten during the exhibition period, fall, drop viscous liquid, and they look “unsuitable” for the exhibition. At first, released birds peck at apples and seeds “displayed” beautifully, and damage the surface of a cone-shaped mountain. Soon they scatter droppings having digested the food. Plants and seeds on display put forth buds whenever the conditions are satisfiable, ignoring that they are exhibits, and they are pecked by birds. The place, which is sometimes badly littered, is cleaned and re-arranged properly by the artist to be maintained as an installation. In the installation that first appeared to have been completed, all elements in their own world coexit, having relations with one another and at the same time, without each other’s interference.

Kano regards these animals and plants in his work, which bring about accidental development, as “absolute others” and something uncontrollable.(3) It does not mean, however, that he thinks they will cause an unforeseeable incident or an uncontrollable state of the work. No matter what the method may be, nature approaches all beings physically as well as spiritually giving some sort of “control” and special order attributed to nature or chaos, so there is a chance for his work to be formed. Here, “the uncontrollable” does not mean that “others” transform the work without any order, but it means that the artist cannot or does not control the world of perception or cycling world of the others contained in the work. In other words, “absolute others” exist beyond the artist’s imagination, and they are beings that will bring something beyond the artist’s sphere of thinking.

Of “BIKKURI (wonder),” the program theme of this time, Kano said, “I’d like to create a stage where “it is not me to be surprised, but a surprise is given from outside.”(4) As he has thus understood the theme, what the artist creates is a framework. In other words, it is an arbitrary environment made by the artist. The work is kept open all the time entailing changes. The work is made to provide us with a place where we can acquire new experience or imagination.

Birds and plants are thus presented as symbols of “incomprehension,” as they “do not understand at all” the world that is set up as an artwork. If the artist and viewers both imagined the world that those incomprehensible beings might be comprehending, the world could be reset anew. As above-mentioned Uexkull wrote, “… each new experience entails a readjustment to new impressions,”(5) if you observe how animals and plants in the work are dealing with daily necessities contained in the work, you are probably witnessing the moment when those items are recognized or named as something new.

This time, birds that have been included in his work these several years were excluded from the venue due to the managerial difficulty. Perhaps the artist was not happy about it, but, without birds, different impressions and experiences of appreciation must have been made possible. Certainly, birds’ presence is so strong that viewers are tempted to observe. Sometimes, it is so strong that it seems the installation and plants look like mere addition for the sake of birds. As there was no bird this time, viewers were relatively in a neutral position. In order to appreciate the installation in which visitors imagined that there were some birds, they walked around the installation in comfort at some times but less comfort at other times. Visitors looked at the scene while squatting down, peeping through a narrow opening, and jumping over an obstacle, with viewpoints that must have been different if birds were there.

Since birds were not what the viewers focused on this time, the work was given an obscure enough image that it could not be named “so-and-so for birds.” Things arranged in the space were spread in abstract colors and forms, and connected relationships seemed to resonate subtly. The installation inside the gallery, whose composition was triggered by some kind of characteristics of the space, was connected to the outdoor stage through upper windows. Furthermore, it extended, triggered by the outside scenery and geographical features, to the roof of the lodging facilities. This “connection” is one of the important elements of Kano’s work. Those elements extending along the building are structural, not constructive, and are connected in delicate proportion not by means of theory or order but by spontaneous, experiential method. What is more, they are warped and bent like chain reactions by the visits of animals and plants from outside and through natural changes, showing enhanced connections and delicate balance. (fig.3)

Kano tries to show such a chain reaction by getting rid of ordinary relationships. It does not mean that his installation has such a form as you have never seen before or it is made of unfamiliar materials. It seems to be related to the fact that he chooses things made for specific purposes from articles of daily use. In other words, it is emphasized that he intends to use things whose purposes are obvious and approach them in a way far apart from their ordinary purposes, excluding what you think “you have never seen before,” or a kind of fantasy vested in human beings. You might say that he is trying to cut off a normal circuit and connect it to some different circuit. I believe that “Naturplan” as a work presents us an open “place” filled with signs of something that we will be able to perceive. Kano does not show it straightforwardly but he creates a stage where we can observe and wait. At the same time, his work looks like an abstract aquarium reproducing, in a closed form, the balance found in the natural world. 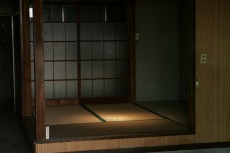 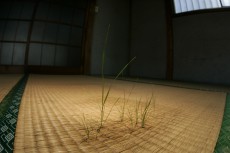 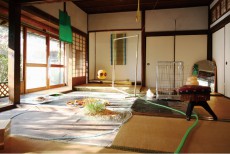 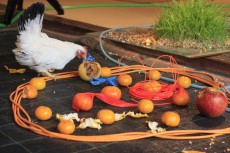 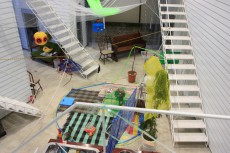 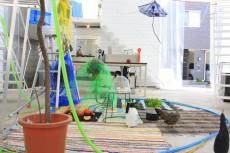 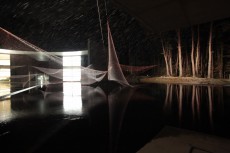 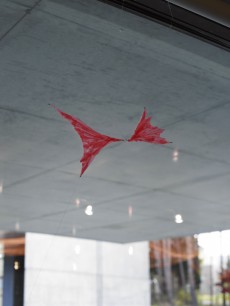 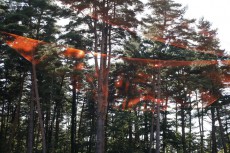