The ceremony of Independence Day in Korea. A man, presumably the President, is giving a speech onstage. In the midst of the speech, a thug suddenly fires his gun towards the President. The President promptly ducks and escapes danger, but a woman in a beautiful pink chima jeogori (traditional Korean clothing) who was on the stage gets shot, as well as the perpetrator, who is gunned by an SP.  However, after a few seconds, their expressions return to those of mere actors, and they get up, straighten themselves, and go back to the beginning. After this brief interval, the same scenes get repeated on and on. This is The National Theatre (2004) (fig. 1), a video art piece by SONG Sanghee that is based on the attempted assassination of President PARK Chung-hee on August 15, 1974. Due to the historic and political background of the motif, and the fact that Song herself played the role of First Lady YUK Young-soo--she was beautified as the ideal Korean woman because of her devoted attitude and political capability in life and being a tragic heroine, and her influence still endures--this work gained attention as having both social/political and feministic content. Such works that directly deal with historic/political/social content unique to Korea were also a common characteristic shared with other Korean artists that became prominent in the 1990s like her.(1)

Song's works often deal with historic and social issues. Additionally "women" are frequently used as a motif, and emphasis is put on their perspective. In Gesture to be a Good Daughter--Proper Posture for Sitting (2001) (fig.2), the images of a woman trained with a "Gesture to be a good daughter" forcing machine are presented, and it is shown that "ladylike behavior", such as culture and manners, is tacitly and almost mechanically "enforced" on women by their families or society. Dongduchun (2005) (fig. 3) focuses on a woman living in a town with a political background. The title is the name of an administrative district where the US Army has been stationed since the Korean War, and it is also the location of a red-light district for the US Army. In this work, Song did a performance in which she stuck tape on her eyes and mouth and walked the streets, and depicted the women living in such special regions as existence both politically and sexually frail. Yet she does not keep the issue of the garrisons merely to an opposition between the US Army and Korea. Maehang-ri (2005) (fig. 4) is the name of an area turned into a shooting-bombing range by the US Air Force.(2) However, instead of picking up the Army's accidental bombings or crime problems, she critically examines the nationalism that uprises in opposition to such issues. In the first scene, the girls in uniforms are aiming their bows, as the symbol of Korean nationalism, towards the sky (the Air Force). But in the next scene they are killed by the arrows that they themselves shot. It is as if they are oppressed not only by external but also internal political powers so their low voices being drowned out.

As can be seen, rather than advocating certain beliefs or positions, Song takes notice "not of people who move the world, but people who are moved by the world"(3), and through her work she attempts to pick up the voices of those who are forgotten in the shadows of history. In order to make the voices of those people, environments, and occasionally animals heard, Song uses real incidents as a model to maintain reality but also layers fictional stories, creating a kind of parallel world. By changing the leading role/subject of that world, she implies that there are different stories and different emotions. That also turns a critical perspective towards the social system that creates "history" as such. It can be said that that is a gaze towards the structure of society and history even though it borrows the narrative of individual phenomenon. Even in The National Theatre, rather than focusing on the tragic First Lady, by repeatedly performing the scene of the incident, she weakens the sense of reality and suggests its manipulativeness, just like Andy WARHOL's "Disaster" series. That can be compared to the manner that, as murder scenes filmed by TV cameras get broadcasted repeatedly, the accounts of situations that were merely surmises root among the people as conclusive truth, and tragic deaths frivolously turn into a show of sorts that lacks reality.

These two perspectives are also shown in her project 1983 that has been released at ACAC on this occasion. The base of the story is the Korean Air Lines Flight 007 Incident. On September 1st, 1983, Korean Air Lines Flight 007 got shot down in a Soviet no-fly zone at the west of Sakhalin by Soviet homing missiles, and all crew members and passengers died. Amidst the tense relations of the Cold War, all information was concealed. It is said that even after tenacious negotiations by the Korean government, all that was finally returned were frozen shoes.

1983 is based on this "story", but perhaps it is merely one of several motifs. What composes this work is a collage of drawings made by hand, a video piece titled Peace to all people in the world, a sound piece titled 121.5 Mhz which is an imitation of a radio, and an installation of wrapped and frozen shoes. The frozen shoes, which are placed before the path leading to ACAC's forest, directly refer to what was left by the victims, and at the same time also symbolizes all stray souls that were inevitably destroyed by a strong force, with even that fact itself being hushed up in the shadows of politics. On the opposite side is a radio that automatically tunes itself, playing the grievous screams of women, a speech by the US President, and a Russian news broadcast reporting that a plane has crashed along with Japanese, Korean, American and Russian pop songs from the 1980s. The exaggeratedly old-fashioned radio and the faded pop songs that are reminiscent of the past emphasize that the incident has been weathered now. The drawing-collage, a reproduction of documents from back then, looks somewhat comical and phony due to the timid realism of the pencilled lines with their touches remaining and the images that are drawn. Through the nostalgia and artificiality that is shared with the radio and the collage, the piece reveals the artificial aspect of history and the "facts" that are clarified before us, and evokes the danger of popular society, where even tragedies are consumed and easily forgotten, just like The National Theatre.

The low-angled perspective projected in Peace to All People in the World is that of the shoes. The video is set in Osorezan in Shimokita Peninsula, Aomori. The shoes are walking around the unique scenery that people thought to be where this world and the other world overlap since ancient times. Beneath the images, a poem appears like a conversation. This is a story written by the 8th century Korean poet of Kanshi [Chinese] poetry CHOE Chiwon (translated to Japanese for the exhibition),  which depicts the story of a man who meets a resentful dead spirit in front of a forgotten grave beside a road and spends the night together drinking. Osorezan in Aomori Prefecture, where the shoes are walking around, is a mountain of worship, which is believed to be where dead spirits gather, and where the living visit in order to talk with and console the dead. During her stay, Song produced further video work using the shoes as a motif (not exhibited as of the period of the exhibition. Progress was reported during her lecture). In the video, the images of shoes, or in other words dead spirits, drifting together in solitude on a wide, dark sea, were captured. After wandering the afterworld and drifting on the sea of reality, where will the shoes arrive? Will they ever have the opportunity to speak? Song cannot give them words, but through a multilayered story, she implies that they have (or had) their own existences and words.

"…One night, B suddenly started to talk with shining eyes about his hometown, and especially when he was bragging about his mother's cooking, he became so talkative that it made me wonder what happened to his usual quietness. He talked on and on, and I got fed up. The next day, when I went up to his bed to awaken him, a late riser, he had already gone to the world of eternal silence" (HISANAGA Tsuyoshi, Burying a Comrade’s Remains -- Winter, from words written for his Siberia Series in 1992).(4)

Is it not through the piling of incidents that fell nearby from a grand story and the emotions provoked that history truly gets inscribed into our blood and flesh? If that is so, then the reason why Song repeatedly incorporated femininity must be because that was an incident that was intimate to her. That finally becomes apparent by a method different from the lingual method of making history and moving society, as if its outlines become apparent after layering thin films. All the same, it is something that tries to pick up frail screams inevitably destroyed by strong forces, using the power of art.

---------------------------
(1) Joan KEE, “What is feminist about contemporary Asian women’s art?”, Global Feminisms: New directions in contemporary Art, Brooklyn Museum, New York, 2007, p.118-120 (catalogue).
(2) A lot of Korean citizen and their houses were harmed by the military drills in which real bullets were used so demonstration and compensation issues often took place. The region was returned to Korea in 2005.
(3) From Song’s Lecture titled “Can Subaltern Speak?” November 20, 2010. This title is derived from the book by critic Gayatri SPIVAK in which she discusses the relationship between Western discourses and the possibility to speak for subordinated (=subaltern) women.
(4) From the Collection Naivety in Art: A Decade of Exploration, Setagaya Art Museum, 1996, p.184. Hisanaga, former POW in Seberia during the World War II, suddenly began painting and depicted Siberia Series long after the war to convey his severe experience.

fig.2 Gesture to be a good daughter--proper posture for seating, C-print, 2001. 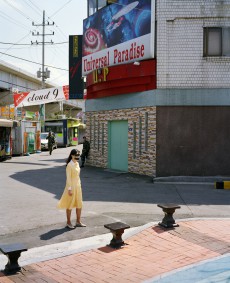