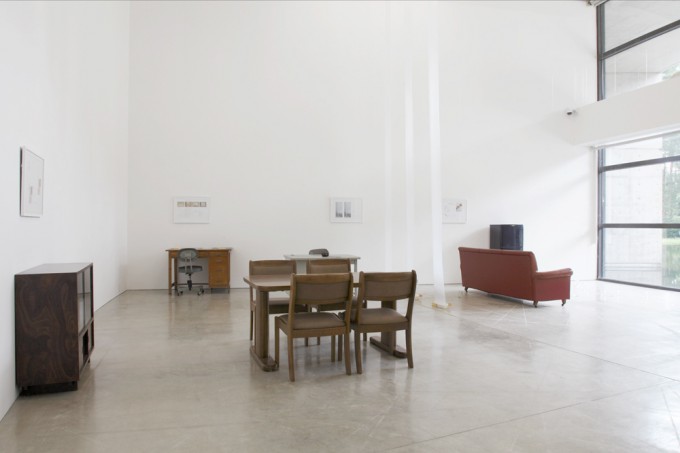 The Practice of Everyday Life for Transforming Value Structure

The artist, mamoru, sees daily casual actions such as eating noodle, rumpling plastic wrap and making hangers as touching each other, as creative and productive activity with a positive attitude and transforms them into the experience of sounds. He finds beauty in different sounds generated naturally by daily life that we hear everyday and extracts them as a musical experience. By doing so, he produces value in things considered almost valueless.

Attitude Represented by Such Phrases as “A Few Notes” and “Etude”

On the domain name of mamoru’s official website we find the phrase “a few notesⅰ.” The word “notes” means not only “short pieces of writing” but also “signs for playing music.” In addition, he has also referred to a recent series of works as “etude.” This word usually means “study,” and also “practice piece” in musical terms. These two phrases clearly show the motivation behind his artistic activity. As we can see from his statement, “a subject that I explore deeply is familiar behavior considered unworthy of attention,ⅱ” mamoru finds value in sounds that everyone knows but is indifferent to, and in behaviors that make those sounds, for example, turning the pages of a book or getting a dish wrapped in plastic. He concentrates his attention on the sounds thought of as noise, produced like by-products from daily casual actions, and admires such sounds. What he pays attention to is familiar mundane aspects of “no significance” in our daily lives; considered unworthy or common by most people. Through his work, including performances and workshops, he transforms such insignificance into entities containing universal value and attempts to share them with others. He trains himself in various ways in order to live his daily life exquisitely. The words “etude” and “a few notes” may represent his attitude that he should live his life with the purpose of getting awakened to many things, i.e. interpreting everyday behaviors as creative actions and not just passing through time as just a consumer.

Admiration and Space for Dialogue

His sense of value can be seen clearly in the case of the Japanese tea ceremony, as he remarks. The relationship between him and his viewers resembles the relationship between hosts and guests during this tea ceremony. In the tea room the host uses his or her refined tastes to please the guests and arranges everything for the ceremony; i.e. selecting tea bowls, metal pots and all the tools depending on the situation on any given day. He or she takes down the hanging scrolls and puts flower arrangements one by one very carefully in the alcoves. The guests read closely about the delicacy on offer and the thoughts behind their arrangements, holding a dialogue with each other and both host and guests admire the arrangement together. In mamoru’s work he continues to explore musical improvisation. He chooses his programs flexibly depending on the location and the nature of his audience on a given day, and composes his performance through a dialogue with his viewers. His soundscapes are attained by the interaction between him and his viewers. Following his guidelines or at times working against them, the viewers discover and read closely something interesting about the ordinary items of daily life and the sounds produced by such things and as they have been carefully presented to them by the artist.

Normally, sounds play an important role in narrating the structure of the tea ceremony: the last guest closes the door with a sharp sound to alert the host that all guests are present in the room; these guests shuffle forward on the tatami, a Japanese traditional mat, with smooth sounds and then they drink the bowl of tea with an audible sound. The host becomes aware the passing stages of the ceremony by listening to these sounds and, for example, can tell the temperature of the hot water and can discern when to make tea by listening to the changing sound of the boiling water in the metal pot. Each sound has meaning and the tea ceremony is made up of a sequence of such minimal elements. The sense of minimalism is also seen in mamoru’s work, for example, a series of etudes in which he creates a soundscape from the minimal human actions found in our daily lives. Each behavior has a clear and causal relationship with the other.

Next, let us focus on the elements of his work that consist of sampling and remixing, which he calls the technique of “graftingⅲ.” Based on the belief that human beings do not need new products any more since our society is already replete with them, he thinks that it is possible to shake people’s faith or impress them by finding some new value in already existing things, adding something to them, thus transforming the object, be it dramatically or modestly. He studied jazz piano at first but abandoned it because of heath problems, but then later began to explore improvisational music. His improvisation evolved by degrees until he came to his present style of work in which he uses sounds from the surrounding environment and daily commodities in an attempt to involve the viewers as they listen to these sounds.

In his work, “etude no.7 straw”, he discovered the unexpected and appealing sounds of blowing a straw and he recorded the sound and then sampled it to create the composition. He did not fully appreciate the huge variety of sounds available all around him until he became unable to play the piano. Since then he has listened intently to those sounds. Although a straw usually ends up as trash after being used, mamoru transformed it into a musical instrument by blowing it, giving it a totally different function. There is something peaceful in the funny scene where the participants strain to blow straws as they surround mamoru, and the atmosphere shared by them is pleasant. Moreover, the mundane straw can be transformed into something special after each person takes it home. The straw is given a new context and new value through his positive re-interpretation.

In another work “etude no.39 instant noodle”, he spices up a series of actions from cooking instant noodles to eating them, thereby transforming the consumer activity of eating into a kind of creative and productive activity of playing a tune. This artwork takes shape in both his own performance and in the installation that the viewers experience. By putting dried noodles, which no one considers beautiful, in a transparent container, he transforms them into something that attracts people’s attention, giving a special quality to the whole process of preparing the meal from the pouring of hot water to the serving of the food. Even in the process of cooking the noodles, he sets the scene so that everyone can exercise some creative control in choosing and cooking the many ingredients such as green herbs, white bean sprouts and yellow, crunchy bits of deep fried dough for the topping as well as pepper, soy sauce and Chinese red chili oil for the seasoning. In this way, he transforms the normally mundane actions of cooking and eating instant noodles into the viewers’ own special experience. They boil water, cook merrily, pour hot water and listen to the sounds of these actions with their ears more alert. The best time to eat is when the noodles have just stopped making the sounds they do while absorbing the hot water. The viewers also listen to the sounds produced from sucking in the noodles. These actions are rarely given any attention or thought but by adding a bit of playfulness we can make the experience a musical one, worthy of a very close listening.

Space Created by Interaction Between Performance and Appreciation

For the exhibition at Aomori Contemporary Art Centre, he obtained or borrowed a dining table, desk, cupboard, sofa, refrigerator, electric fan and other household goods, such as hangers, from several homes and arranged them carefully in a unique gallery space, 6 meters high with a large windowpane. To this he added nine framed drawings on the wall It seems that these pieces of furniture, electrical appliances and the drawings are the only subjects of the installation in the white cube gallery setting, made up to look like a normal interior. But that’s not all. This is also a space for experiencing performance and appreciation at the same time, which is created using a unique musical approach. The viewers can create sounds with their hands and listen to the sounds here. In this space, drawings on the wall can be interpreted as scores telling us how to play the music and the electric fan, hangers, ice cubes in the refrigerator or glasses as instruments producing sounds. And then the viewers visiting the space can be interpreted not only as performers using such scores and instruments to play the music, but also as an audience listening to the music. Following the instructions of the score, they take an ice cube with a string from the refrigerator, suspend it from a hook in front of the window, the ice cube melts bit by bit and the drops of water fall down into a glass, making very beautiful sounds. They listen to these sounds while sitting leisurely on the sofa at the rear of the space and at the same time they turn on the electric fan, which is set in front of the side hanger rack, and then listen to the sounds from the hangers as they are blown by the breeze of the fan and hit each other. mamoru had only worked with one sound at a time, but for this installation he created the so-called hybrid space where viewers can experience several different sounds at once like an ensemble. It is piquant that the passive act of listening cannot be attained without the active and productive act of performing, that is, there exists an interchange between both roles.

Through his activities, mamoru essentially intends to make everyday life flourish more by “listening” or “bending your ears.” Although our ears are always exposed to the outside world and hear different sounds, it is common to pay no attention to most of them. He listens to such sounds as carefully as possible, makes a choice among them and finds something interesting in these sounds that are considered unworthy by most people. Then he interprets and re-constructs the sounds with a positive attitude to form them into a musical piece that he names etude.

He says that he wants to speak with those who live in our contemporary worldⅳ. He seems to be trying to find a way to survive the world before his eyes, making it more beautiful and rich by sharing daily moments of awareness and wonder with others through his work. If we can understand his attitude of “admiring the sounds of our daily lives,” and of being sensitive to the minutiae of everyday life, we can also discover our own subject to “admire,” so that we can find our own way to survive the world more merrily while sharing this way with others. In the internet society, we’ve already had very active intercommunication between production and consumption. The act of consuming is sometimes converted or interpreted into an activity that actually produces, creating a fuzzy line between the two. In our physical world, his creative technique for making the most of existing products, that is, to convert consumption activity into a kind of alternative production activity and not just sticking to a consumption activity, may give us suggestive hope for shaping a new kind of attitude towards living everyday life.

ⅲInterview with mamoru in AC2 vol.13.

ⅳInterview with mamoru in AC2 vol.13. 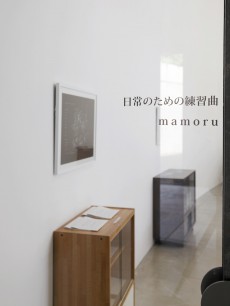 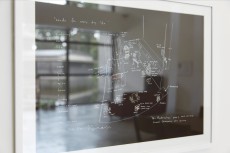 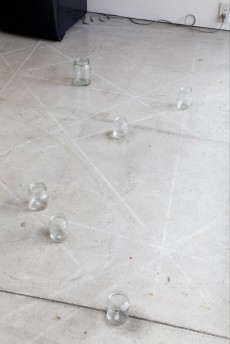 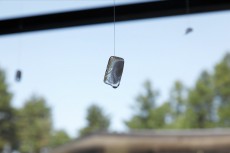 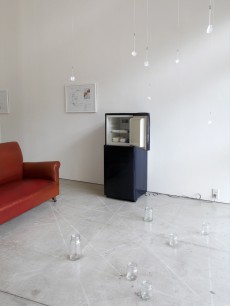 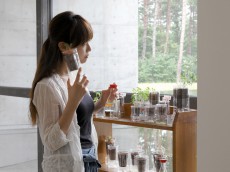 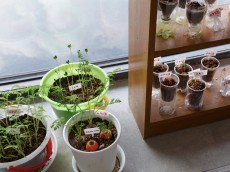 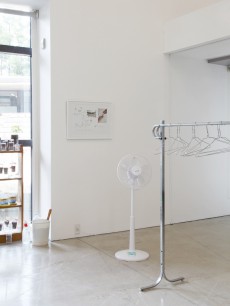 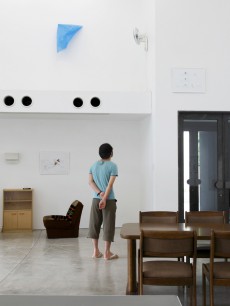