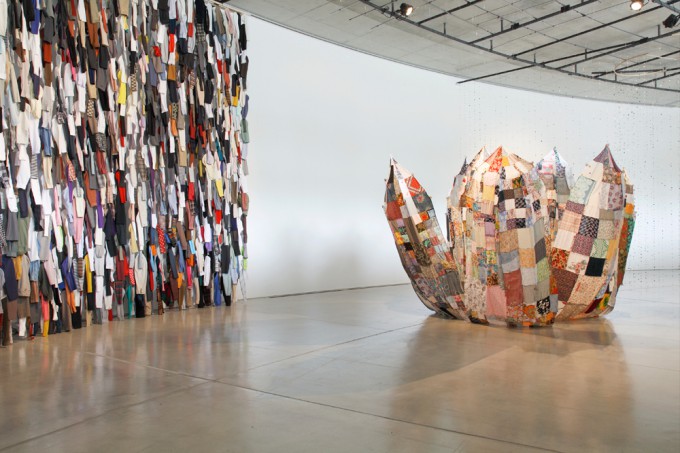 A sentence in NISHIO Yoshinari’s profile describes his overall artistic activity plainly, though at first sight it seems difficult to understand; his works have consistently revolved around relationships between clothing and communication. His artistic activity dates back to his childhood when he was crazy about clothes. Beginning in elementary school he started dressing himself in a variety of elaborate styles and enjoyed seeing his friends or surrounding people reacting to his appearance. Thus he began, without realizing it at the time, creating relationships with others by putting on clothes. While growing up, however, he started to feel discomfited by the fact that no matter how eccentric his clothing, people looked at him strangely but without any actual interest in his identity, apart from his friends and acquaintances. His odd appearance interfered with his attempt to communicate freely and smoothly with others. Since then he has given himself over to creating work based on clothing as an art material, not fashion design.

He has been exploring the full scope of his creative activities under the name “Nishio Workshop,” while maintaining several footholds in Japan and abroad with those in Tokyo and Nairobi as his main bases. The name “Nishio Workshop” refers clearly to his unique approach to clothing-as-art in that it is derived from the name of his grandfather and father’s firm where they manufactured parts of sewing machines. As we know the word “workshop” means a room or building in which things are made or repaired using tools or machinery. Nishio seems to be intent on building his own production system and economic principle, regarding his artistic activity as factory production in the cottage industry.

The ”Form on Words Factory” is a case of such practice at the Higashi-Oizumi Children’s House in Nerima city, Tokyo. In this work he explores the way communication arises using “words” and “clothing” as tools. He has developed a kind of system, like in some games, which can easily be used by anyone, without his presence, and it involves making a versatile and simple rule that you can apply wherever old clothes and a few people are available. It may well remind you of “Kaekko”ⅰ by FUJI Hiroshi and “Asatte Asagao Project”ⅱ by HIBINO Katsuhiko. In Fuji’s profile you see the following sentence: “…he continues performing workshops and demonstrations all over Japan, and exploring techniques to build Operation Systems for creating a new type of activity in a community.”ⅲ It is plain that these are practices antecedent to Nishio’s. To be sure, his practices and theirs have something in common in that all of them are inclined to build systems for enhancing communication among people, but a major difference between his and theirs is that he is not aimed chiefly at developing his activity around the idea of “community.” His main purpose is to pursue a new way of looking at clothing. He attaches much importance to “clothing,” which has helped form his identity, and he has considered every project as his own opportunity to ponder over fashion.

His major art projects include “Self Select” in which he exchanges clothes with unknown pedestrians who happen to pass by him and has each full-length portrait photographed on the street in various cities across the world, and “Familial Uniform” in which he reproduces old family photos with the same family members in the same clothes at the same places. Such projects can prompt you to ponder relationships between fashion and identity. These art works evoke a laugh because there is something comical about them, although sometimes he may seem a bit pushy by asking the strangers to exchange clothes unexpectedly or by making someone put on clothes reproduced from old family photos. That may not be just because you’re reminded of somewhat tense scenes where he tries to communicate with the others, but also because of a certain oddness in his appearance. There is something strange but attractive about him with feminine bobbed hair and putting on work clothes or nightclothes as his everyday clothes. He says that he has felt embarrassed by a situation where people try to evaluate a person by his appearance, so came to choose such styles that challenge people’s stereotypes in order to prevent others from categorizing him by his appearance. His practice of exploring “relationships between clothing and communication” might originate from such a way of thinking. He tries to transform the existing value system slightly through his daily clothing choices and we may feel this can make our daily lives more creative and enjoyable.

The mention below of “1000 Coordinates,” which is his project for this exhibition, should be seen in light of the above premise. He was invited to exhibit his works during the final stage of the project inside a large exhibition hall 6 meters high, 10 meters wide and 40 meters long. For that purpose, the following strategy was chosen naturally: “Nishio Workshop Aomori Office” was set up in Aomori Contemporary Art Centre, and advertised to the public requesting volunteer staff who would work in cooperation with him and whose numbers grew by the day until he had a total of 60 volunteers. He collected 4000 pieces of old clothing from citizens around Aomori city, because this is the average number of clothes one person uses in his or her entire life, according to statistical data gathered by Nishio. Such a quantity of old clothes was collected in a month without much difficulty because every house stows old clothes away deep inside wardrobes. In light of this fact, we might consider the extremely quick growth of the consumer culture within our modern social system.

While collecting old clothes is Nishio’s favorite method for making art and he has done so in many parts of the world, he says that he has never examined in detail what the collected clothes are or look like. However this time he devised a plan to look closely at the nature of our society and our lifestyles by sorting all the collected clothes by type and by analyzing them through the lens of “Re-Modernologio.” With that in mind, he designed a basic system for such analysis, like a kind of rules in games, i.e. asking participants “to coordinate clothing from head to toe using those old clothes.” The participants freely matched trousers with shirts and so forth, selecting from a heap of 4000 old pieces of clothing, creating 1000 outfits in total, while also filling out an A4-sized analysis paper which asked them to explain each of their outfits in detail. Then Nishio put on every outfit, photographed himself as though for a portfolio with front, back and both sides, and turned the 4000 pictures into a film. The title of the whole project is “1000 Coordinates,” after the 1000 analysis papers, and included the film that was projected onto the entire wall of the exhibition hall. It took about a month to complete this operation that might have been the most meaningful part of the project in one sense. Though the action of wearing 4000 different pieces of clothing may be somewhat exhausting and masochistic, there is something humorous for the artist in this action in that he honestly obeyed his own rule of wearing every outfit and even put on slender dresses and lingerie calmly, and it seemed to have purged those old clothes of their personal memories.

In the next stage of the operation participants took the old clothes apart into pieces. Then he produced the new installation work inside the hall using those pieces based on his own interpretation of the characteristics and functions of each piece of clothing. This installation is composed of 5 pieces of three-dimensional landscape: “Buttons/ Rain” in which 8000 buttons were united by fishing net and hung from the ceiling to the floor; “Floral Prints/ Flower” which is a giant flower made up of petals in only floral prints using draping techniques; “Sleeves/ Waterfall” in which 1650 pieces of sleeves were hung from the ceiling to the floor like a gigantic waterfall; “Sweaters/ Clouds” in which unraveled woolen sweaters were arranged together around a net using twine; and “Clothes/ Strata” which is an installation using all the scraps discarded from the other pieces. An interesting point with this kind of production process is that Nishio gave very little instructions to volunteer staff, sharing only simple phrases such as “rain of buttons,” allowing each assistant a great deal of autonomy during the process, as he has done in his other projects. He does not strive for faultless accuracy of technique in his work but rather for the creation of a system that is tolerant of accidents and serendipity.

Referring to such work he talks about “using installation to display the results of analyzing collected and classified clothes, for example, the nature of the floral patterns and sleeves.”ⅳ In addition, the works were compiled from elements of his past projects, so that we might call it the complete work of his artistic activity to date. To give you some example, “1000 Coordinates” is based on “Self Select” and “Floral Prints/ Flower” on “Overall”. Every operation for producing the installation could be said to be a process of editing his past artistic activities into something novel and displaying them together.

KAWAMATA Tadashi remarks in his book that he wants to practice very ordinary things, which he names “Artless,”ⅴ while retaining a reasonable amount of freedom. Similar to this idea, Nishio’s artistic activity also involves very ordinary practices such as exchanging clothes, making patchworks and choosing what he wants to wear. He merely generates a slightly different value to what people practice in their daily lives. This value can be found in a practice that is considered valueless by the economic principles of modern capitalism, in that exchanging clothes can be interpreted as communication and making patchworks as collaborative work, from his viewpoint. He assimilates the ordinary behavior of daily life into creative activity, and such daily behavior as choosing or exchanging clothes can be transformed into a kind of production activity. The aim of this activity is to establish a kind of system for living by means of artistic production in society that encompasses the new era of fashion design and does so in a way that goes beyond mere hobby but becomes a way of life.

In the artist’s eyes, what does he see as the parameters of a daily life? He has chosen to deal with clothing as his lifelong artistic medium, not just as consumer items like in fashion, but by separating and emphasizing each function of “clothing,” such as representing individuals’ identity or sheltering them from their surrounding environment. By doing so, new values can be created and spread into our daily lives so as to establish a unique economic community. Nishio states that the next objective is to set up his own fashion label. He refers not just to the production of clothing, but also to the creation of novel and creative living spaces in which fashion design is seen as a wide-reaching artistic production activity using clothing that can include art projects, workshops or exhibitions, all under the name of “Nishio Workshop.” His attempts to provide a voice that questions the homogeneous social sense of value in the capitalistic economy, to enhance his own ability to work and to find new ways of developing a community-based economy could present an alternative option for surviving in our coming era. 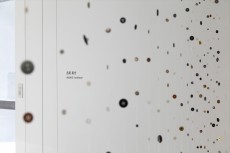 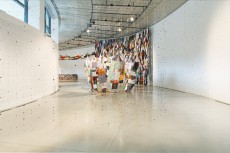 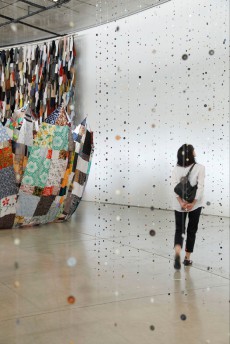 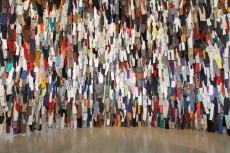 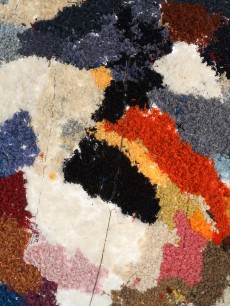 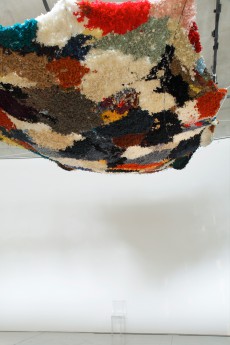 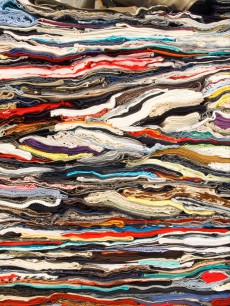 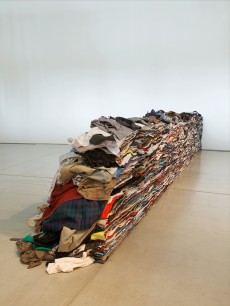