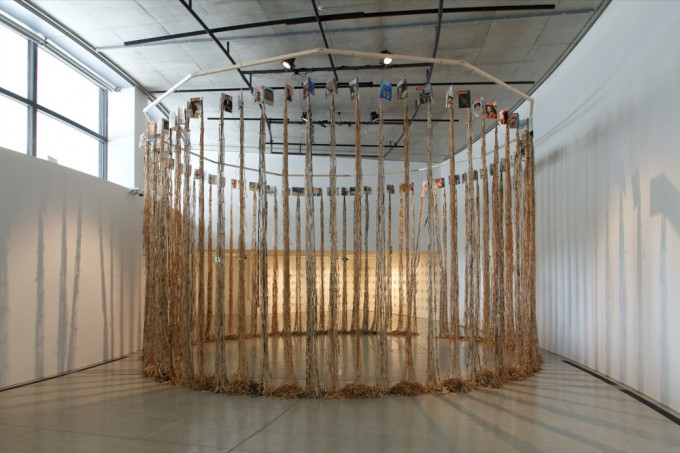 Book like water that flows like waterfall.ーStruggling jointly to a foolish idea is the same as the flow of water.

A “book” is loved by people both as a material object and as a source of stories and ideas but often has a greater influence on them from this immaterial characteristic more than anything else. A book might be similar to a “human being” in that sense.

IIDA Ryuta creates his work using different sources of paper such as books and newspapers as his materials. His sense of form is derived from a kind of sculptural mode of thinking, having focused on sculpture at university. He has invented his unique technique of sculpting with paper by cutting up dozens of sheets of paper and piling them together, transforming them into something new and moving while keeping a fundamental sense of the original material intact . Having felt alienated by the more common materials used by students in the “Department of Sculpture,” such as stone, wood and metal, and the techniques for using them, he found paper to be readily available and a unique and unexpected material. Books also appealed to him because of his respect for their contents and typewritten words, as he is a book lover by nature.

About his choice of materials he remarks, “Every sculptor converts materials such as wood and metal into units which he or she can deal with in order to produce art work. After the decision on units, sculptures can be formed with such units repeated or rearranged. As for me, books were there close at hand as I was searching for which materials were the most suitable for my sculptures.”ⅰ As he says above, he shows an interest in the material structure itself, regarding books as units that can achieve transformation, as well as an interest in the abundance of latent meanings in books. Therefore his art not only refers to the characteristics concerning contents of books, magazines and letters which contain information, infinite nuance and the symbolic world of contents and lines, but also to actions like the opening, turning and closing of pages and the material characteristics of a set of papers on which typing is printed. In this way his art often causes unique and mixed reactions.

In his work “I see, I can’t see” he collected old paperbacks published by Iwanami Shoten and cut off parts of every page. He came up with the idea of cutting and transforming books to put his own personal stamp on them, as it were, because his collection of precious books had often been borrowed by his friends and sometimes never returned, lost. It’s as if he is laying claim to the eternal and sole rights to possess a book that normally anyone can possess by reading. The book has been taken out of its natural circulation as though captured like a specimen of insects. However, the book has been also taken out of its original context, engraving its history and empirical emotions in itself, and then transformed.

The open books are sculpted in such a way as to keep the natural form of the book. In this act of “sculpting a book” he cuts the thin pages one by one and creates a kind of sculptural surface by putting them in a pile. The typing on the visible pages is strangely distorted, overlapped or hidden depending on the methods of cutting and piling the pages, and on the wide range of ways to put different feelings into every book. Even though we cannot interpret what is written in the books, those fluttering fragments of typing on the visible pages have a power to create a different story, different feelings and a different world. Such passages show themselves vividly as they spread around an uneasy sequence of sounds in our minds because we perceive each sound, grasping at each fragment, but unable to guess the completed sentence. Such a book acquires other meanings when its pages are almost pitilessly destroyed and lose all association with the act of reading. This could be why some viewers expressed their embarrassed feelings over his action of “carving a book” while others admired his sophisticated sculpturing techniques. In a material sense, books are just consumption goods that are discarded in large quantities everyday, and if he had used stone, wood or plain paper, no one would have blamed him. That may be because a book bears the strange rights of possession that enable anyone to possess it in an immaterial sense through the action of “reading,” and in addition, because there is some kind of absolute respect for texts representing “human intelligence” inside a book as a medium.

Even so, the work has been produced focusing on a different characteristic of books other than their immaterial characteristic. If he supposes that a sculpture gets formed by an accumulation of actions as “units” and counts “cutting a book” among such units, then it can be said that the work includes the accumulation of innumerable acts of repetition and rearrangement and without emotional regard as to what is being cut away. Thus “consecutiveness and rearrangement” and “repetition” can be perceived as essential elements of his work and are manifested in the form his work takes i.e. a “book.”

The following work gives the appearance of being a paperback, “Turumaki bunko,” published by Turumaki-sha. It’s titled “Oratorical Type” written by IIDA Ryuta, which is a book consisting of 157 pages using nostalgic papers discolored with age, old fashioned font and a printed logo on the front cover with a list of IIDA Ryuta’s past works for advertisement on the last page. The contents are composed of nine chapters from “Oratorical type1” and each page repeats words and phrases like “the process of recognizing a type,” “repetition,” “nucleus of brain and solidification of knowledge,” “impossibility of forming as a book,” “scent of typing” and so on, while rearranging those phrases with punctuation marks and brackets. It seems that such words and phrases are one key to understanding his work and his artistic process, and help us to understand his intellectual processes. Moreover, these words and phrases seem to force the artist to repeatedly question himself and his relationship to them, to continually experiment in rearrangement, and to explore the boundaries between the two facets.

Let us also explore “Verbalized -because I can’t see you-,”ⅱ a catalogue of his solo exhibition held in November 2010. You may suppose that it must contain a large amount of text and many pictures of his work because of the elegant and thick appearance of the catalogue. However, there is something strangely different about the catalogue. Looking at it closely, you will notice that it repeats five times the same part of the catalogue consisting of 32 pages. The typical appearance of the catalogue in the 32 pages notwithstanding, the same part is just repeated innocently like a broken record and the value of information is distorted, thus everything becomes vacant. It may remind you of the works of Andy Warhol. With pictures of scenes of accidents printed repeatedly and roughly, it implies nullification of tragedy and change in quality of information by the mass media. Iida’s works could also show his interest in change in quality by repetition and by differences made in rearrangement.

His interest in the symbolic use of media consumed everyday and the change in quality of information has also shown itself in “Book like water that flows like waterfall.” In this work, 72 old weekly magazines are hanging in groups of six from a dodecagonal wooden frame. Each magazine keeps the front cover as is, but the inside pages are cut to pieces in the shape of an oblong card and suspended from the ceiling, reaching down to the floor, creating a pile of papers. You cannot easily read any of the pages due to their minute width but it’s possible to recognize fragments of words and pictures. It looks as if time is falling down from the magazines hand in hand with discolored papers like the fast streaming news of today. Within the dodecagon, the scent of old paper pervades the air like that of a second-hand bookstore. The information written on the magazines’ pages used to be taken in as the latest and most important news, but now those contents and appearances arouse nothing more than nostalgic feelings and reveal the surfaces without meaning. By being separated into pieces and hung like a flowing waterfall, such magazines that are normally easily consumable begin to show characteristics of a “weekly magazine,” with a distorted value of information and a warped panorama of the times exposed. It seems that separating those elements of a magazine allows more latent and intangible meanings to appear.

In contrast to such magazines dealing with the flowing and passing time of the general public, the work titled “Verbalizes, Because I can’t see you” seems to revolve around memories and the passing of time on a personal level. He uses more private paper media, that is, picture postcards mailed from friends or relatives in specific places while they are traveling. Such a postcard is personal and important only to those who wrote it, those who received it and possibly their personal relations at most, and therefore its owners or readers are restricted. It is both a precious memory and what you should keep to yourself. Many of the words are cut off from the postcards in his work so you cannot read whole sentences, but only guess as to the pictures contained. The meaning of these postcards with holes is made up by others’ memories and imagination, which takes them out of the realm of the personal and into a more generalized realm. This distortion of reality makes the postcards receptive to other nameless individuals’ memories. In addition, Iida organized a workshop to gather participants who brought their own postcards and worked together on the first stage of cutting them up. It seems that the workshop offered the chance to cut the postcards containing more personal memories while retaining original personalities, that is to say, to make them nameless in a sense while retaining the personality.

Thus, in Iida’s work, the meanings of materials often has a great influence on the work itself, on the artist and on the viewers, while his method of creation supplies the structural form that guides the process. Could this be because the materials themselves are the result of highly civilized human intelligence i.e. paper media, different from natural materials such as wood and metal, and also different from primitive materials? The artist himself doesn’t place much stress on the meanings but instead bases his works on “paper media” as an object and on its structure and system, and therefore sets one sphere against another, keeping a sensitive balance between both meaning-driven and form-driven work.

ⅰHATTORI, Takayasu. (2007).‘Capter5: The Gift, IIDA Ryuta, Accompanying the original envelope created from a “book” with pictures and words’ in THE BOOK OF PHOTO COMMUNICATION. Shoeisha Co., Ltd. P79. 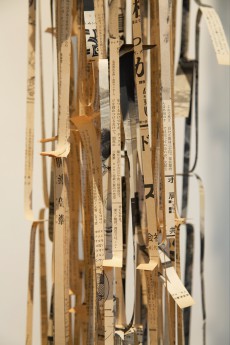 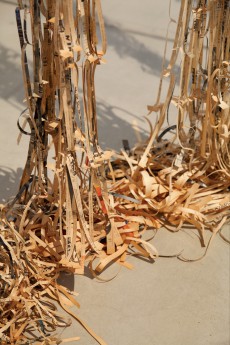 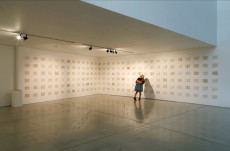 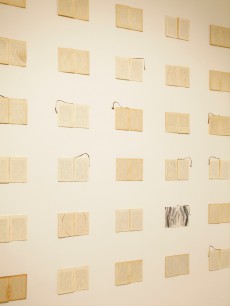 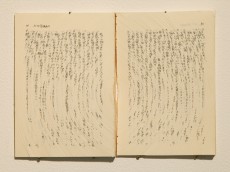 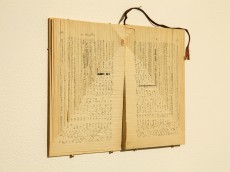