“Play” as the essence of human activities
KEINO Yuka

“where am I, who am I, where am I going”
Carlos NUNES presented these questions about his own existence for a group of works he made in Aomori. He is not heavy-footed, however. He keeps on moving his hands while he takes on a sense of floating and tries to find answers for the grand questions on his own.

He resigned a designer job to work as an artist, and in his installation works, he often expresses the consequences of things and matters by combining familiar materials including daily goods and fire with the phenomena. In recent years, he films the phenomenon itself to incorporate what is difficult to visualize such as light, time, nature and energy generated by people. His works seem to explore the relationship between physical laws of the universe and life beyond the “play” of things and words that are brought about by his works and titles.

Johan Huizinga, a pioneer who studied human “play,” understood that play was the essence of human activities and the source of culture. According to Huizinga, “Summing up the formal characteristics of play we might call it a free activity standing quite consciously outside ‘ordinary’ life as being ‘not serious’, but at the same time absorbing the player intensely and utterly. It is an activity connected with no material interest, and no profit can be gained by it. It proceeds within its own proper boundaries of time and space according to fixed rules and in an orderly manner. It promotes the formation of social groupings which tend to surround themselves with secrecy and to stress their difference from the common world by disguise or other means.” (*1) Bearing this in mind, I would like to think about Nunes’s production here.

Due to a visa problem, his stay was unfortunately shorter than scheduled. Before he departed for Japan, he had sent his work “light hole” (2017) there, which was made with silk paper(*2) that was relatively easy to buy in Brazil and the material familiar to him. He planned to make it the starting point of his residency production of work-in-progress after he arrived.
At first glance, the paper stuck on the wall seems to be illuminated by light, but looked at closely, the lamp is off, and you can see that the paper itself has been crafted as if it were illuminated by light. In fact, the color has faded as a result that the artist kept shedding light on the paper for months.
With such simple ingenuity, an eclipse-like scene is lightly created by continuing simple experiments. As the work is presented with its poetic title, the viewer is urged to stop and observe it closely.

Using the same silk paper, he made new work “pipa”. Kite-flying is popular in Brazil as it is in Japan. Over there, it has more of a competitive element; if you hook the opponent’s thread and cut it, you win.
Nunes cut as many colorful pieces of paper as he could to make a kite, and by reconstructing them, he produced various geometric patterns. He then examined how the kite should fly in the exhibition space, and eventually made it look like how Kasimir Malevich presented suprematism painting as a dynamic movement having the fourth-dimension in mind at “The Last Exhibition of Futurist Painting 0. 10 (Zero-Ten)” held in Petrograd (present St. Petersburg) in Russia in 1915. (*3)
In terms of suprematism in which abstraction was explored and the relationship with the real world was eliminated, his idea was inspired by familiar things, yet you can see his attitude trying to escape from ordinary world.

His works in which the element of “play” is most noticeable are “meteoro (meteorite)” (2017) and “fototaxia (phototaxis)” (2017/2019), both of which are video works. The artist set fire to fireworks on the rocky ground at dusk. He video-recorded it in slow motion, and it shows how the sparks slowly intensify and weaken towards the end. It seems to be a metaphor for the life of an organism. The reproduction of “meteoro” was attempted in Japan where it is easier to buy fireworks than in Brazil. In order to film it in a short time before dark, he looked for a deserted place and eagerly ignited fireworks. It looked as if a boy was enthusiastic about an experiment banned by parents at his secret base.
“fototaxia (phototaxis)” finally exhibited was inspired by steel wool that sparks when lit, and he made a rotating machine using the surrounding things such as a chair and an electric fan and recorded how the sparks rotated. Like phototactic insects, the work seems to touch upon the instinctive nature of creatures going for external stimuli including “play.”

His “sculpture with aomori air” is also a work characterized by the element of “play” in which a familiar garbage bag is worked on to be an “objet d’art” by putting air into it. The performance by the artist was actually given and the audience could experience it inside the gallery. They were immersed in this simple action to create a mysterious sense of unity.
As he introduced in his artist talk(*4) , he would unmistakably join a series of artists who had explored how things and sculptures could be based on “play” like Calder who made mobile sculpture that looked like playing with air, Fischli & Weiss, Erwin Wurm, and Roman Signer.

By the way, Paul Gauguin painted “D'où venons-nous? Que sommes-nous? Où allons-nous? (Where do we come from? What are we? Where are we going?)” (1897—1898), inspired by tropical Tahiti and questioning the existence of humans.
In Brazil, a cultural movement called “Tropicália” happened in the 1960s as people sought after unique hybrid tropical culture of many immigrants. Hélio Oiticica, the major artist of this movement incorporated interactions between artworks and the viewer while he was influenced by abstract expressions such as concrete art and De stijl.
During the time of our lives, anyone would ask the question of self-existence. Having understood the late painter’s question of the Western civilization and his view of integrating contradictory images and having followed the flow of contemporary art in Brazil since the 1960s, which is minimal yet energetic, Carlos Nunes gives a simple guideline to the big question of self-existence, that is, “44cm”. What is felt at heart is thought over in the head and turns into an expression. The length from Nunes’s heart to the top of the head is exactly 44cm. Oiticica once said, “To live is art itself.”

(*1) Johan Huizinga, Homo Ludens, A Study of the Play-element in Culture (London, Boston and Henley: Routledge & Kegan Paul Ltd., 1949), 13. Yale School of Art, http://art.yale.edu/file_comuns/0000/1474/homo_ludens_johan_huizinga_routledge_1949_.pdf
(*2) Silk paper is very thin like tissue paper, and it is similar to “hana-gami,” a material used in layers for artificial flower decorations. It is available in Japan, but it is more reasonable and comes in many different colors in Brazil.
(*3) See photo.
(*4) Artist talk was held on August 10, 2019 (Sat.) under the title, Carlos Nunes “Oncotô (where am I ).” 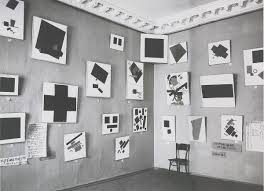 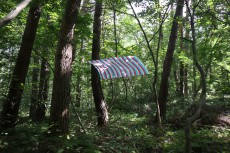 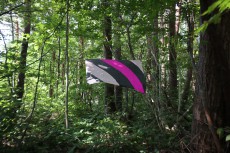 above all photo: YAMAMOTO Tadasu