An Open Laboratory of Art

MIHARA Soichiro has, throughout his career, exhibited works that make use of autonomous systems to generate given phenomena. His interests lie in functions, phenomena, and the environments that surround an artwork. For this exhibition, Mihara chose as his laboratory an observation site that encompassed the natural environment and a modern-day information environment in his work Natural Observation, Formation of Nature. The work has many layers that, in its entirety, revealed inconsistencies and contradictions in our social systems, from the selection of materials to conflicting situations during the production.

Natural Observation, Formation of Nature consists of five parts in four locations. Each location—the forest, the gallery space, and the ACAC Water Terrace—was connected online to receive, react to, and share environmental information with the others.
The audience is first prompted to visit Mihara’s installation Site. From a paved walkway, visitors travel down a small trail into the forest and approach a steep set of stairs. As they descend into the woods, they hear the rustling of leaves and the chirping of birds in the summer heat. Splashes and gurgles inform the visitor of a nearby stream as they follow the meandering path through dense vegetation over a wooden boardwalk that takes them deeper and deeper into the forest. The visitor crosses a bridge and hears the soggy sounds of the wetland at their feet as they continue their journey until the view opens to reveal a large, circular platform built of plain wood.
After removing their shoes, the visitor ascends the platform to be greeted by the smooth texture and light scent of hiba cypress. Directly in front of them stands a water basin made to resemble a campfire in between two mulberry trees from which hang two red tassels, which recasts the space as someplace sacred. Occasionally, water is pumped into the water basin from a tube, forming a chorus with the wind and the stream that flows to the right of Site, just past the mulberry trees. Two polygonal umbrella-like objects hang from the trees, one made of plain wood and another painted vermillion just off of the left tree trunk. The platform’s wooden planks are cut radially—their point of convergence outside of the platform—and are oriented south, pointing in the direction of the gallery.

Visitors encounter A balloon that’s being observed floating midair in the center of the gallery. A device beneath the balloon flashes green and purple lights while two yellow propellers rotate at irregular intervals with the faint, high-pitched whir of a motor. Occasionally, mist is dispensed from the mouth of a suspended bottle, and the scent of hiba spreads throughout the gallery. Directly below the balloon is a mound of soil1, made from compost, that represents the earth and is reminiscent of the hydrologic cycle.
Isolated Island installed on the ACAC Water Terrace as if staring at A balloon that’s being observed in Gallery B. Just below the eaves sits a hand cymbal used in Aomori’s Nebuta festival, which is played by falling raindrops. On a quiet day, its metallic song rings out at a distance, far and out of sight of the pond.

Though not visible from Site, traces of a small hokora shrine remain at the top of a steep slope to the east. The small structure was once a part of Towada Shrine, located near Lake Towada and dedicated to the god of water. Mihara even remarked that while working with the muddy soil, he felt as if he was making an altar of sorts.2 Just as a shrine acts as a place to draw attention to “the other,” visitors will stand here in the forest, their sensitivities heightened as they look out on an overwhelming display of nature. However, this work is not meant to create a sensory and primitive dialogue with the other. It is a place to confront the environment in its entirety, including both the natural environment and the man-made objects and structures.
Site and A balloon that’s being observed both acquired local data and communicated it in real-time over a 3G internet connection using antennas located on each, and the continuous transfer of measurement data triggered actions on both devices. Site is equipped with environmental sensors that capture temperature, humidity, light, and wind as well as a PIR sensor that senses the presence of warm-blooded animals. Of these, only the PIR sensor was incorporated into A balloon that’s being observed inside the gallery, where it captured the presence of anything with body heat.
Whenever someone visits the gallery space, water is pumped from the stream into the basin at Site. Whenever hiba-scented mist sprays from the bottom of A balloon that’s being observed, it indicates that the PIR sensor beneath the dark vermillion umbrella at Site has detected someone—or something—there. The continuous high-pitched whirs of propellers sound like a warning, the result of control signals that precisely reflect data from the wind, which would update every few seconds. This wind data is gathered and measured by six small microphones placed horizontally 60 degrees apart in a hexagonal pattern beneath a plain wooden umbrella structure at Site. Based on temporal differences, wind direction and velocity is calculated as extremely low-frequency sound and converted into driving data for propellers on two different axes, altering their rotational directions and speeds in real-time.

Monitoring Website published the environmental information collected from Site and A balloon that’s being observed online in real-time. The website is updated every ten seconds, a continuous and immediate display of transparency that shows exact sensitivity—quite the opposite to the experience of the human body. By showing in real-time environmental information that can be quantified and visualized—even going as far as to include signs of existence and human presence—Mihara shows us the information environment (surveillance society) in which we live and juxtaposes it with the overwhelming amount of sensory information and data within the forest.

In Natural Observation, Formation of Nature, phenomena appear to be irregular or erratic to the audience—the spray of mist, the drawing of water, the spin of a propeller. But each one is governed by causal relationships that show the audience a microcosm of the world and its many cycles and interdependencies. 100W solar panels lined the path to the Site and provided all the energy needed to power the devices. Additionally, Aomori hiba cypress was sourced for the wood used in Site and for the mist in the gallery space. The mist moistened the composted soil below, out of which a tree, whose seeds were also from Aomori, began to sprout and grow. Mihara even dyed the thread for hanging devices and sensors using pigments from the mulberry tree, whose deep, purple fruits would drop and stain the light hiba wood during the construction of the Site, much to the chagrin of Mihara and his team. Not only does Mihara’s creative system connect back to the natural environment, but it also links back to Aomori through its materials as well as to people’s everyday lives through his collaborative composting project. His work is like a miniature garden into which a sliver of the world is neatly partitioned.

Mihara had initially planned to build a compost toilet in the woods. This project would have also contrasted the time that it takes for microorganisms to return to the soil and the time it takes to dispose of and break down nuclear fuel. At the same time, it would have put into perspective the impossibility of achieving a nuclear fuel cycle. In the composting project, people tried to keep microorganisms happy and healthy in order to produce viable soil. This unnatural sight ironically overlaps with the human predicament, which is ultimately at the mercy of the physical environment. Mihara establishes his experimental laboratory in the form of an artwork in this little corner of the world. In it, he uses the causality we see unfold in the realities before our very eyes, namely the materials and different phenomena, to draw our attention to how naturally modern society embraces the irrationality—or the unreality, as he calls it—of ideas like the nuclear cycle.

Isolated Island kept its distance from the relationships of surveillance and generation. The work added a different perspective, its clear tones calling us to stop from afar. The hand cymbal could not ring out in a drizzle and was drowned out in a downpour. It seemed to speak in a language that was altogether beyond the human threshold. Trouble unexpectedly struck Mihara’s work during the last week of the exhibition, causing the propellers to spin erratically. Looking back, I think their random rotation could have been the buds of another language trying to emerge from causality. Mihara has created a laboratory that gives us a holistic look into the micro and macro environments in which we live. They allow the observer to bear witness to the dawn of a new language of the other—a language that flourishes right before our very eyes.

(*1) Collaborative production, What is eaten in Aomori will become soil in Aomori (See pp. 36-38)
(*2) From a conversation with the artist during production.
(*3) Concept sketches detailed at the end of this essay. Traces of a hole that was originally planned for the Site platform are located under the water basin. 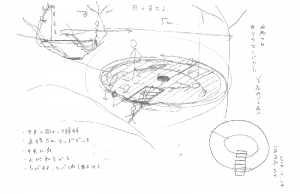 Above all photo: YAMAMOTO Tadasu