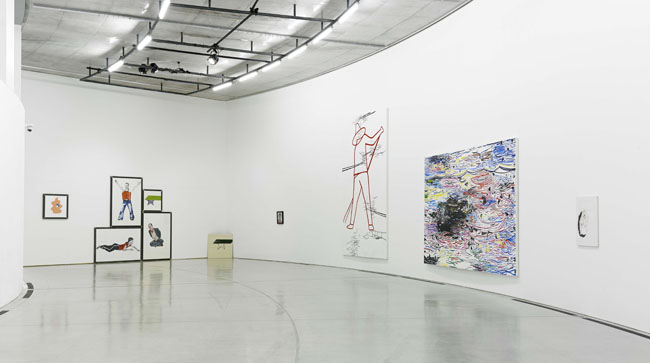 The characters, landscapes, and ordinary objects often portrayed in O JUN’s paintings can be ordinary to the point of discomfort. His motifs are at times discernable, but at others times can be seen as clusters of lines and colors, abstracted by different angles and techniques. O JUN hurls his subjects into absence, removing them from any background or context. He does this without modeling and using flat colors without shading, the undisguised touch of his brushstrokes, as well as simplified and symbolized subjects and a striking white space that isolates them. Convergent lines that would bring together a piece’s image and name—or image and meaning—never meet in O JUN’s work, as if they are avoiding what their union might bring. This causes uneasiness when trying to put a finger on what the subject matter of his work might be. Shapes, lines, images, and colors all flicker before our eyes with equal intensity, and cause our line of sight to jump back and forth between the rendered image and the materials used to create it. Perhaps it is also because the image itself appears in the valley between the coincidental and the inevitable, drawn as something that occurs just before the creation of meaning.

MANMANCHAN AN is comprised of oil paintings done by O JUN between 2003 and 2015, recent crayon pictures including two new ones created for this exhibition, as well as a number of pieces from YUEN (Playground), his ongoing series begun in 2006 that features his signature iron-framed artworks.

The exhibition’s title comes from baby talk that is used in Osaka and other areas of Western Japan when placing one’s hands together, such as before a meal, before a gravestone, or when reciting a prayer to the Buddha. It is described as coming from the Namu Amida Butsu chant, but O JUN says he remembers first hearing it as an Osaka comedian’s catchphrase when he was a child. It’s possible that the phrase has remained an unclassified yet vivid one for O JUN, connected to a unique personal memory precisely because it was heard and remembered without an understanding of its meaning. For that reason, the word would return to him unexpectedly when preparing for this exhibition.

These strange relationships between memory and certain words and images are often found in O JUN’s work. Events seen and heard by chance. Someone’s offhand remarks. Works related to these things often come up when asking O JUN about the background and inspiration for his paintings. Those experiences, internalized through his unique interpretation, are rendered abstractly, pruned of their original context and even the meaning he first gave them. Even the comedian catchphrase-turned-exhibition title is used as a phrase that accompanies ceremonial action, dissolving into daily life while dismantling its original meaning and origin. The phrase evokes the process of construction and deconstruction of images in O JUN’s work. His images seem to have been flung into space, suspended without a conceivable destination, but he doesn’t do this to intentionally mislead or disorient the audience. In an interview, O JUN said, “I think if I was conscious of composition or structure, my paintings probably wouldn’t be any good...The idea of just drawing...and ending up with a subject or image strangely suspended in space or stuck to the canvas as if its life depends on it—that, to me, is still better.”[1] But that isn’t to say that he draws his subjects according to conventions of structure and composition. Rather, it could mean that he perceives a corporeal image made by connections between memory and physical sensations through some sort of inevitability. The events connected by coincidence and inevitability in his creative process and the forms of his work are drawn clearly in white space as images that evade resolution.

In the exhibition, oil paintings from different eras adorned the gallery’s outer walls in a single straight line, situated without story or context. Perhaps there was some kind of internal connection for the artist, but it was not visible on the surface. Compared to Playground, which is bordered with the same iron frames, these oil paintings on canvas have a distinct texture and each is juxtaposed with the others while resolved within itself at the same time, each within its own world. Their juxtaposition generates strange spaces that blur the relationships between the artwork and their individual worlds. Their unreached conclusions and the tension within their images create a certain rhythm.

If this situation is generated by the combination of finished artworks, then the picture on the inner wall can be interpreted as a place to generate the images themselves. O JUNE often uses alloy pencils in his performances, on the basic premise that drawing is a form of doodling. From this, we can surmise that he did not intend to produce a specific, premeditated image on the ACAC gallery’s inner wall. The limp, twisted lines doodled along the wall assumed the shape of swirling poop. These winding lines connected back to the artist’s early memories of Iroha-zaka hill, a place mentioned by a childhood classmate—a beautiful boy but a big bragger. [2] The poop drawn on the wall sprouted faces, arms, and legs. Ultimately, a swarm of poopheads appeared in true doodled form, donning a variety of clothing and performing different acts. The protagonist here may have been the shape of these lines and the tenuous connection they create with the memories and images derived from their twists and turns. The shapes from O JUN’s pictures eventually formed the basis for Profile, a portrait of a poophead painted in crayon and fitted inside an iron frame.

O JUN’s crayon works were shown both in their iron frames and outside of them during his exhibition at void+ in Tokyo, held simultaneously with his exhibition at the ACAC. The works, completely settled within their iron frames, were stripped of their texture and gained intensity as nonphysical images. Their unframed counterparts, on the other hand, were like beasts stripped of their fur, exposed and vulnerable. The reality of the materials that form them—the texture of the paper and crayon—was ever present. This contrast seemed to swing back and forth between reality and fiction. In contrast, the poophead pictures and Profile, both created at the ACAC, conjured up the creative process of the image created by the artist’s hands and the inner workings of his mind.

His pictures were collectively given the title KUSOSEKAI (World of Shit). At a workshop held in the middle of the exhibition, his artwork was violently overwritten, destroyed by doodling participants who used the same alloy pencils that he made to create his pictures. Use of the same pencils made it harder to discern O JUN’s lines from those of workshop participants and, as a result, any hierarchy of good versus bad, high and low, was lost. The title of this work gains new meaning when we understand that O JUN does not give preferential treatment to the lines that are encapsulated as images, but rather sees them as impulsive traces spawned from bodily movement. We understand the ambiguity of O JUN’s childhood classmate and the impartiality of obscenity when we see the homogeneous nature of the lines. The proliferation of impulsive lines indicated similarities and dissimilarities between O JUN’s act of drawing and his paintings on the wall opposite, all arranged in a perfectly straight line. To O JUN, the act of drawing is an instinctual and even euphoric impulse. It is human nature removed from the intellectual, aesthetic, and strategic decisions within a work of art. And this primordial passion for the act can be just as valuable as the novel surprises depicted within fictional worlds, which retain scant glimpses of the acts of their creation. This contrast was poignantly highlighted and embodied in O JUN’s exhibition. 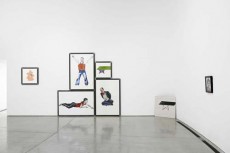 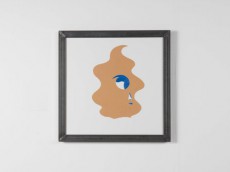 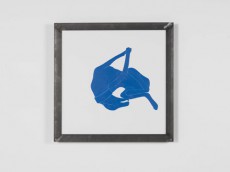 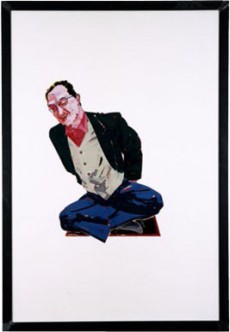 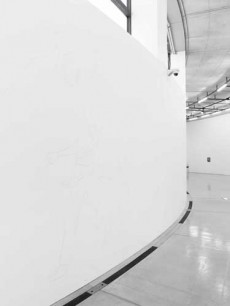 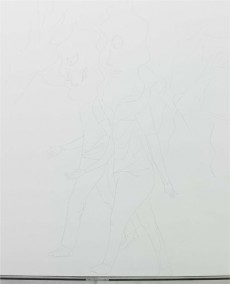