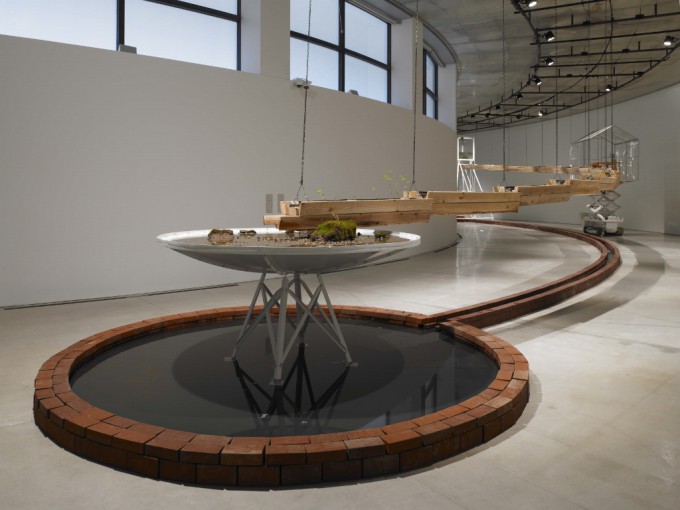 A microcosm of the world found in "Floating Conservatory"

Using vehicles, mainly cars, and sometimes the power of engines, KOKUFU Osamu has consistently produced works, which impress us with a taste of science fiction. Car Freezer (1998) displayed again in this exhibition is a so-called car type freezer installed on the engine part of his own car. This combination between a vehicle and freezing equipment, which “preserves” food by delaying rotting, reminds us of a retro-future time machine.

While dealing with cars and automobile parts with refined skills of a craftsman, his works are not to emphasize his skills. As his works are ultimately presented in the form of a car or vehicle, they might give the impression of manufacturing skills, but cars and vehicles function as agents to expose artist’s inner mind like paints and brushes for a painter, and their materials, texture and even structures support the system of his language for artistic creation. This is also relevant in that he produces works by not only rearranging the same parts but also interestingly sharing the parts from other artists’ works. Probably it means that each part and equipment he produces is replaceable as an element within the creation of the artist’s overall worldview. In Floating Conservatory produced at ACAC this time, parts that were used in his old works such as a water tank, steel tower and parabolic antenna were recycled. Here, it seems irrelevant to distinguish between the new and the old because they, as a whole, build up one worldview, one Floating Conservatory. This work has been made special for this space and it is certainly site-specific.

At the back of the gallery stands a steel tower with a water tank on top of it, and wooden planters are arranged in tiers along the curved gallery space from the front of the water tank. Planters are filled with earth brought from the woods of ACAC, and water runs through a plastic pipe fixed in the center. Water soaks out through small holes made in the pipe to sink into earth. At the end of about 30m long row of planters is installed a parabolic antenna of about 4m outer diameter to catch water running from the water tank. Gathered water gradually falls into a lower waterway, and when it reaches a certain amount, the pump begins to work to return the water back to the water tank. The water soaks earth while circulating slowly, and plant shoots come out of soil stuffed in the planters at random. Stones covered with moss are arranged on the dish catching spilled water, unfolding a miniature landscape. Water running from a higher place to a lower plane grows plants, generates a waterscape and returns to the source. This reminds us of natural circulation of water and at the same time, archetypal scenery of our country abundant with water. On the side of this installation is a mobile “little conservatory for a man’s simple life” where the artist could spend time and take care of plants in the planters during the residence project period. Though separated from the water circulation, people are contributing to the great environment by watching it quietly and giving it a hand.

The impression of sound in this work is so striking that it could be called a sound installation. As water running at different levels flows down into cans set in the planters, there are always sounds of different tunes and rhythms from different places. They echo, clash and play cool, complicated and lively sounds in the ACAC gallery where sounds reverberate well. As visitors move along to enjoy this lengthy installation, their movements cause echoes at different places so that there are gradual changes both visual and auditory. Kokufu’s works are usually produced so as to suit the site, and his work this time is not only site-specific in that he made the best use of the height and length of the space but also he introduced the element of sound into the work to make it possible only at this site.

Floating Conservatory, which is the title of both the exhibition and this work, represents a conservatory (= the work) as equipment that makes us recognize the relationship between humans and the world relatively. A conservatory is an ideal and artificial environment to protect and bring up something in imitation of nature. In other words, it is a pseudo-environmental world for animals and plants. There is no need to draw an example of novels on Utopian societies in order to explain that Utopia and Dystopia can make us realize in relative terms various values and affairs in this world expanding vaguely before us. Utopia and Dystopia are actually impossible although realities are condensed in them, and thus they take objective views on realities. This work, which has equipment to grow plants by circulating water as well as a conservatory for a man who stays close to it, could be called a microcosm of happy life around water. In gallery B, on the other hand, another conservatory in which polluted water circulates is installed to make a pair with gallery A. The other circulation, which is thinned down in the vast world and driven away outside our consciousness, pours as green poisonous-looking rain because the world is reduced to a conservatory (titled Endless Rain). Each of the two, a sort of miniature of the world, makes the gallery building appear as another “conservatory” where the real world is condensed. The building is accentuated with artificial lines in the fresh green woods although it is designed to fit geographical features. It is as if relations between human work and nature were indicated in the form of nesting boxes. Highland under the Rainbow, which shows an overturned car with surrounding earth heaped up on it, is set up symbolically in the middle of the pond. During the project period, those plants grew vigorously. The reflection of the overturned car on the pond looks normal, so it must be up to the viewer to see there either conflicts between a man’s act and nature or harmony between the two.

In Kokufu’s works, often with plants, we are reminded of binary oppositions such as nature versus humans. In “machines” produced by Kokufu, on the other hand, the structure itself is overlapped with the structure of the world and its function and system are extracted to create a place like the world’s microcosm. What’s more, the artist has deep affection for each machine as his language for artistic creation, and the personified machines reflect our selves. Although we are reminded of Dystopian discourse when harsh reality is implied, imaginary dialogues between phenomena that never seemed to be fused begin to sprout at the bottom of our hearts. 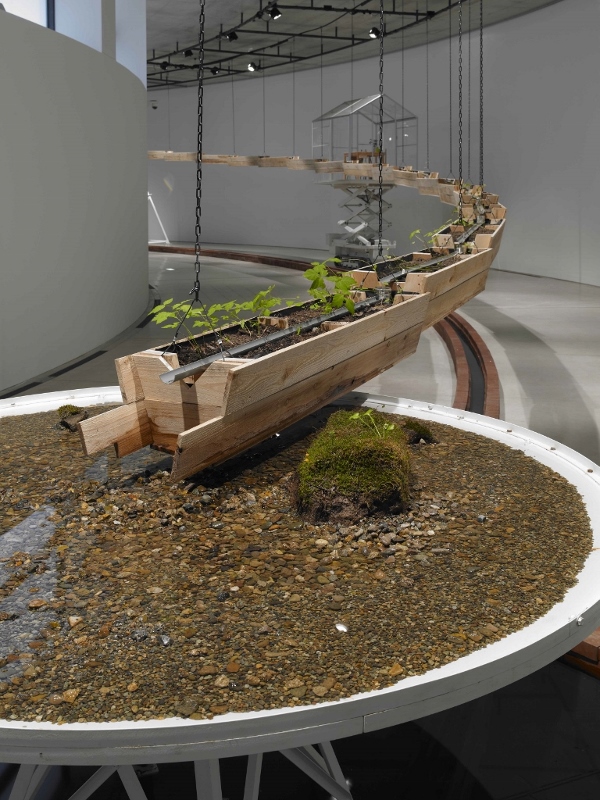 Plants grown on the "Floating Conservatory" 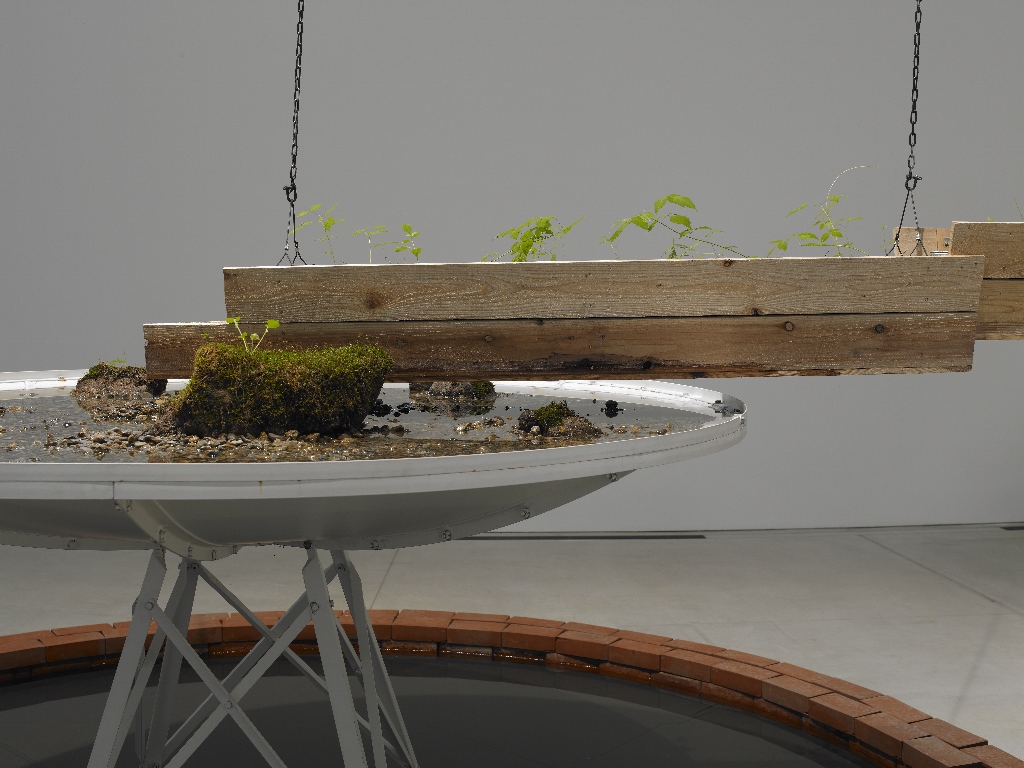 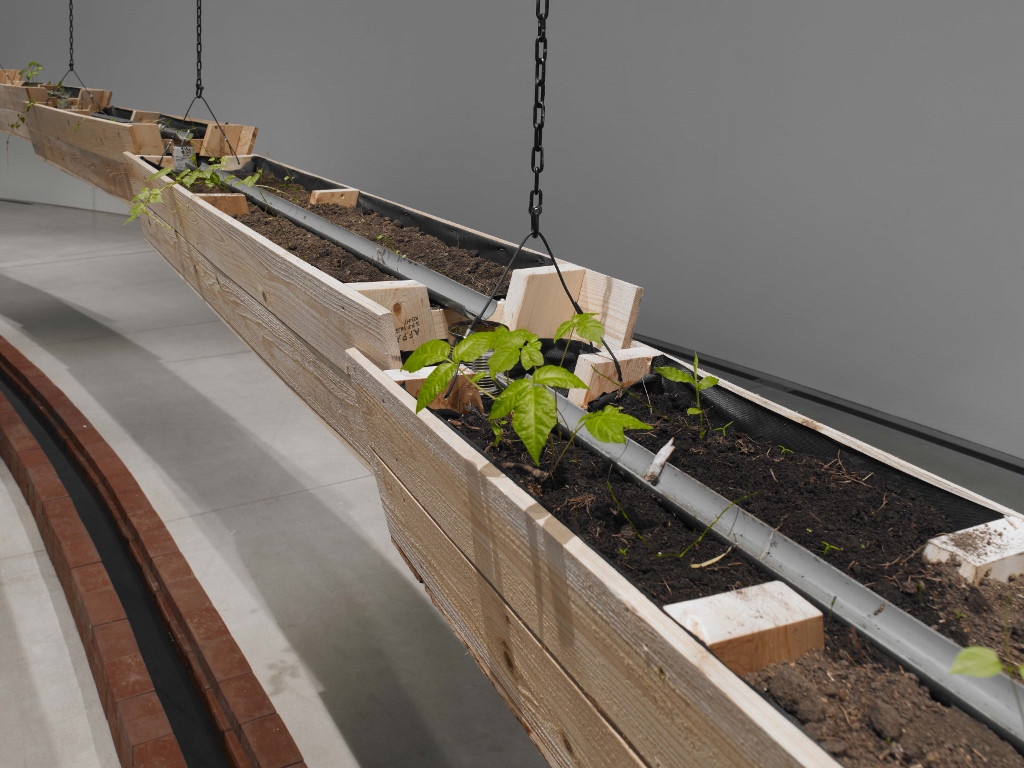 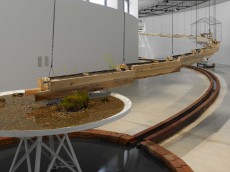 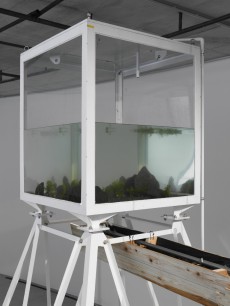 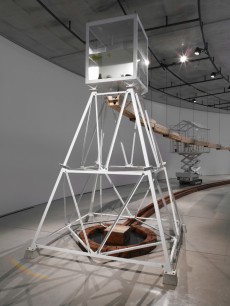 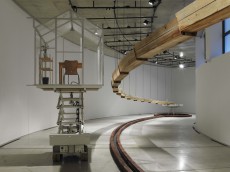 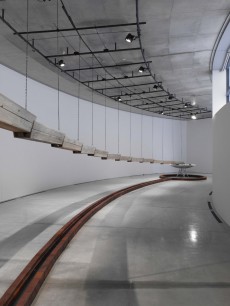 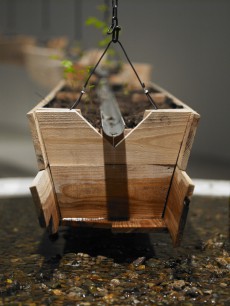 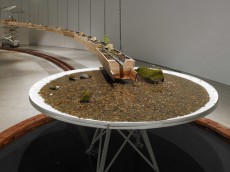 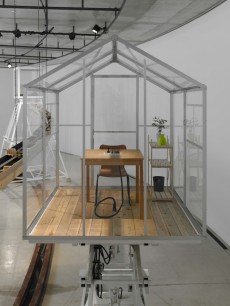 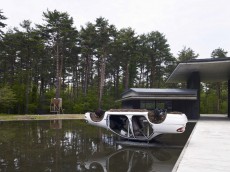 KOKUFU Osamu "Highland under the Rainbow" 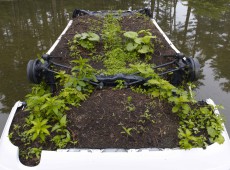 Plants grown on the "Highland under Rainbow" 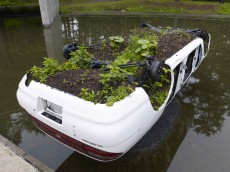 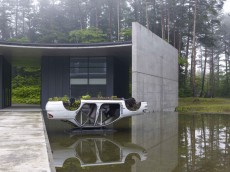