FUNAI Misa Solo Exhibition “Paradise / Boundary, where we were once” 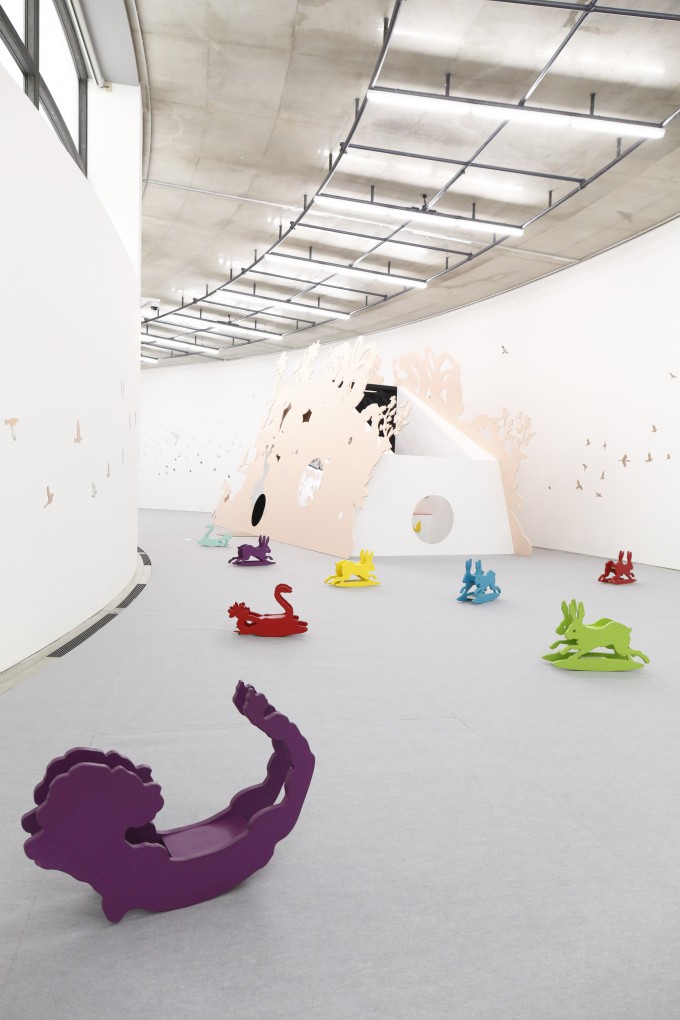 Paradise of the Beginnings: Child as a Guide

FUNAI Misa’s means of expression have been changing greatly from the earliest stage, when she produced improvised drawings on canvas, to her mural paintings presented at Aomori Contemporary Art Centre in 2007, and the works composed of images with mirror surfaces that are still being produced, as well as three-dimensional works that she positions as “painting to ride.”(*1) Despite those changes, her thought to pursue expressions in painting is always consistent. In this exhibition, major works by Funai from the early stage up to the present are assembled to overview the changes in the means of expression that she has pioneered and her consistent thinking. Here I look back on my experience of arranging the entire exhibition as an installation through the interaction between the works and the specific space of ACAC, a huge half-arc gallery without any partition.

Placed in the center are works of a series of “painting to ride” including Mountain/Mother, her largest slide-type work that is 4m wide, 10m deep and 5m high. They are like playground toys, and visitors are welcome to play there to be part of the work. On either side of those works, the mirror works Hole/Paradise/Boundary/Painting/Fundus of the Eye and Cave/Explosion are placed on the extreme ends of the arc facing each other, and the drawings are placed on the walls between the mirror works and the three-dimensional work. In the gallery formed as described above, the viewer is expected to proceed along the huge curved corridor. While looking at people playing in the center of the space out of the corner of their eyes, the viewer takes a look at the drawing on canvas, and recognizes that the plane surface and the three-dimensional are mixed together with the gallery space and people reflected in the flat mirror. When reaching the three-dimensional work, the viewer is taken into part of the work before they know it, and become those who are seen in reverse. As they pass the three-dimensional work, they again gaze at the images of the imaginary and the real fused in the mirrors, and return to the drawings beyond them. Displayed in the small room space where the right half of the innermost part is partitioned are her drawings from the earliest stage and her study Medium that she is still drawing like a diary while “exploring the deep psyche in the unconscious bottom.”(*2)

In a cave where mural paintings were drawn in the late period of the Old Stone Age including Lascaux, the very experience of entering the dark and small cave was necessary for accessing the mysterious area to reach the psychological depths accompanied by a trance state and hallucination. Moreover, the production of images for a mural is said to have created a new spiritual world.(*3) In the installation of this exhibition, the viewer proceeds into the interior while experiencing the crossover of the two-dimensional and the three-dimensional, as well as the transformation from a viewer to a person viewed, and the fusion of the imaginary and the real, to reach the deepest part of the gallery where her initial drawings which support the foundation of her creation and the drawings that she works on every day. Likened to the above mural painting in a cave, this installation is a path to reach the depths of the artist’s heart, and that leads the viewers to look into the depths of their own minds by way of the internal and external change through the work, and to discover another world, that is, a paradise, in the work.

Also in her drawing, Funai is conscious of swaying between material and non-material, and I would say that the transition from drawing to a three-dimensional work means more clearly shifting images in the painting from non-material to material. How a flat plane and a solid object intersect in a space seems to transform an image popping out from the two dimensions into a three-dimensional object. If so, a person invited as part of the work in a three-dimensional work is also an image jumping out of the drawing to be made into a substance. By going back and forth between the drawing and the three-dimensional work, a person as a materialized image experiences mentally as the subject traveling between here and there, that is to say, the two dimensions and the three dimensions, and the real space and the painting space. As the object, that person exists in the image as an entity on the boundary coming and going between the two.

While inviting viewers to her imaginary world, Funai particularly focuses on the existence of children. Children treating equivalently mental phenomena, such as reality and fantasy, consciousness and unconsciousness, and sleeping and awakening, (*4) go between here and there more powerfully than adults. MURASE Manabu interprets this equivalence as follows.

“It is similar to the mentality of saints invariably inviting all people, bad or good, healthy or sick, to treat in the same way.” (*5) It means that a child is depicted in her work as a person on the boundary going back and forth between here and there, and at the same time, that child is summoned as a person who treats equivalently the whole of creation in which concrete shapes that Funai draws, such as animals, plants, landscapes, parts of the human body and the internal organs, coexist with forms resulting accidently from a series of organic lines and stains of ink. Furthermore, Murase thinks that because the repeatable “beginnings,” such as starting over, changing one’s mind and awakening, are early stages of the mental phenomena of people, and these “beginnings” are related to the fact that myths and religions of various countries and ethnic groups have stories of the creation of heaven and earth. He also points out that knowing the “beginnings” through the art of equivalency leads to the creation of a new world.(*6) In Funai’s work, therefore, a child is a guide who leads us to a paradise of the beginnings, encouraging us to be creative while integrating in-between the external/internal incorporated in her work. 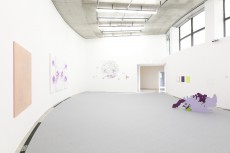 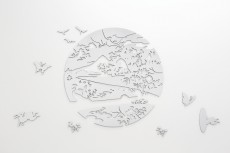 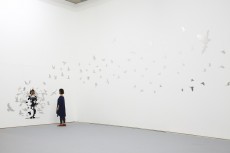 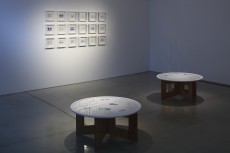