Albano AFONSO Solo Exhibition “In a State of Suspension“ 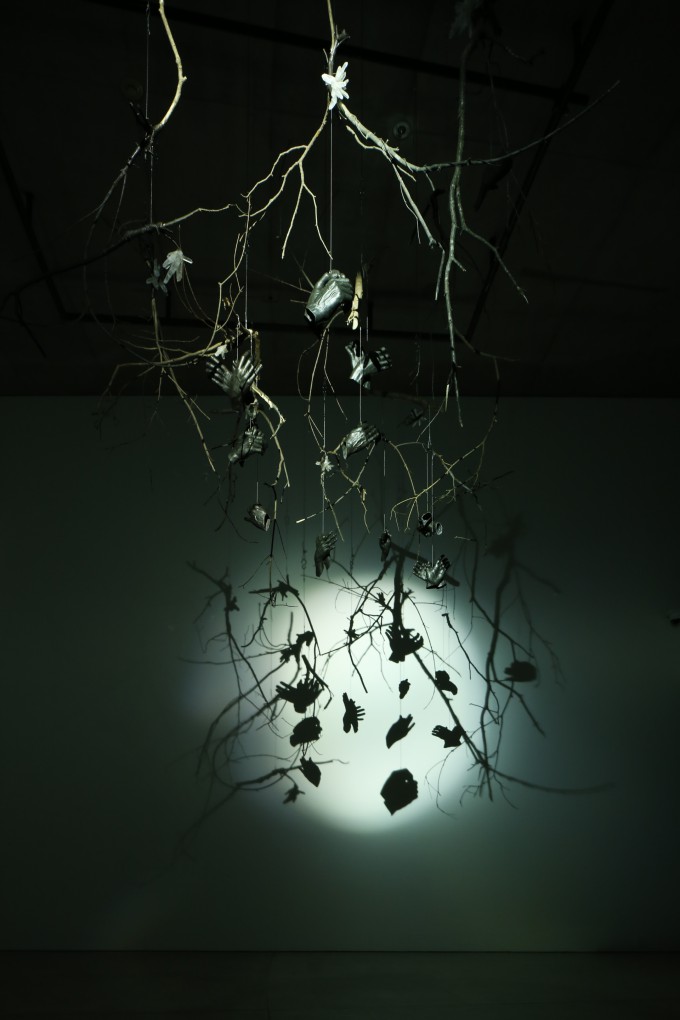 Floating in time and light

In the beginning of a short summer in Aomori, Albano AFONSO arrived at ACAC dragging his big suitcase. He creates a tree not seen in nature by connecting, with bronze parts, various kinds of branches he collects in the woods. These trees, whose shapes were corrected and put together to some extent in the studio as parts of mobiles, were carefully carried to the gallery one by one. In this work, mobiles are hung in the gallery space and light is projected on them so that the forms created by light and shadow are presented. In order to show both the changing state of moving-sculpture mobiles and the shadows made there, and to make the whole space like a device of light, he employs a method to craft the work on the spot, while carefully adjusting the parts and light.
For the parts that make up the mobiles, tree branches, bronze casts of the artist’s own hands and crystals were used. While various shapes of small and large branches sway in the air changing their appearances all the time, the artist, looking at the balance of each part, replaces branches that have grown long and adjusts their length by breaking some of them to find the right position. The right and left hands cast with bronze make the shapes of birds and dogs as if they were playing hand shadows. Owing to bronze, a heavy material, the mobile starts to move slowly when it is hung in the air as if it were feeling gravity and moving accordingly.
When they are lit with a projector, their shadows are silhouetted on the walls, and the branch lines and animal shapes begin to make shadow pictures. The depth of the moving sculptures appear on the flat surface as shadows of the outlines only. There we see delicate branches created by nature, artificial bronze and crystals that twinkle here and there. Although shedding light from one direction makes the light-dark contrast clear on each part, they also look like they are pushed into the wall as layers. By showing both entities and shadows, it will emphasize each element of the three-dimensional and the plane. Adjusting the parts while looking at the shapes of shadows cast on the wall, Afonso seemed to be drawing a picture on the wall without touching it. He does not touch the shadows directly, but the shapes appear on the wall by his moving hands to make the mobiles. When the shape is close to light, it looks large and its color is dim, while it gets small and darker if it is distant.

Afonso started his artistic activities by making paintings. It is said that in the early years, he cut out the shapes of maps around the world to make molds like silkscreen printing, and by drawing layers repeatedly on one picture, he made an abstract black figure image in the end. For the next two years, during the period of exploring methods of expression other than painting, he was concerned about the history of Portuguese colonization of Brazil that lasted until the 19th century. When he visited Portugal for the first time, he was shocked by the fact that the landscape and culture that he saw there were so much similar to those of his home country Brazil. As he came to know that his country’s culture and art originated from the art system of other countries and the West, he started to make works to explore Brazilian or his own identity. These works, in which he cut out the figures of Western classical paintings with dots and overlapped them with other figures, imitated the poses in masterpiece portraits, took pictures of such self-portraits and overlapped them, became Afonso’s most important works.
The bronze figures which are parts of the mobiles are elaborately made and reproduced in detail. Human hands, which are moving parts of the body, are partially cast, and they stop the movement and are hung in the air with the hollow inside. They make a little eerie presence felt. The hand can make many shapes and expressions by moving fingers and it is a part symbolizing human creativity. People portrayed in artworks such as Michelangelo’s, classical bronze sculptures and paintings show that hands have expressed many things including prayers, thoughts, anger and so forth. The hand is a universal motif to convey various expressions even when the times change. The figure made of bronze, the typical material in art, can be considered to be Afonso’s portrait made by the hands of the creator himself. The search for identity in art history can be said to have appeared in the form of a mobile in this work.
The spectrum of light made by a prism rotated by the motor circulates in the gallery shedding uncalculated natural light. Its movement changing according to the distance from the wall ticks off a pleasing rhythm and the light makes the viewer forget the flow of time. I remember Afonso being relaxed and working while listening to Bach’s Goldberg Variations. I feel that musicality in this installation is not only due to the fact that the artist learned classical guitar since his childhood to pursue a career in music but also the artists who influenced him are Klee and Kandinsky. The colors of the spectrum that turn freely in the space make us feel like hearing the sound and tone. The video work representing human labor and exercise through repetitions of several still images reveals universal shapes such as circles and squares, and its rhythm resonated with the light.

The projector and the motor are switched off when the gallery is closed. In the exhibition space, which depends on the system of art, Afonso has created eternity that never stays the same. It constantly renews its shape and leaves itself in the relaxed time and the flow of light. The light and movement disappear with the switch-off like a record which stops spinning, and only the mobiles in their original colors are left suspended. 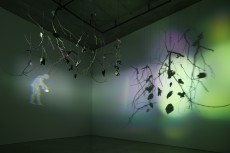 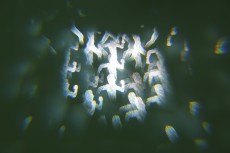