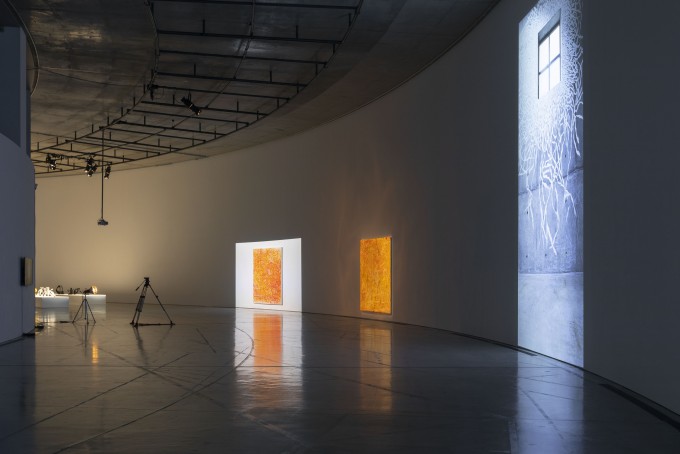 Person in the Vortex

The gallery A of Aomori Contemporary Art Centre (ACAC) has a 6-meter high ceiling and almost 60-meter long arced walls. The viewer experiences the exhibition as they walk towards the back of this long arced space, which resembles a corridor. In this text, I will reflect on the exhibition in three parts; the first, middle, and final part, in the same order that the viewer would experience it.

When we look at the arc-shaped gallery building from a bird’s eye view, we see that the building is designed with a circle as its key motif. The arced-shaped gallery and the fan-shaped shallow pond fit into the perfect circle. The first in a series of video works: Winter Drawing / Drawing on the Snow, which is displayed by the gallery entrance has captured this structure. The video shows Ishida making drawings by spraying water on the concrete pathway that cuts right through the circular exhibition hall. It starts with the camera close to the ground, the camera gets elevated as Ishida moves towards the middle of the pathway, and eventually it captures the entire circular exhibition hall in the frame. While Ishida is drawing lines in the middle of the circle, shown from the above, the viewer’s eyes are attracted to the circular building and the snow-covered trees surrounding it. In the middle of the whiteness of snow, the circular shape creates a cavity, resembling a black hall. As our eyes move towards the center of the circle, the elevation decreases by layers; from the roof level, the piled-up snow level, to the ground level. The height differences create an optical illusion of the spiral going down towards the center of the circle. There at the very bottom of it, Ishida is making the pattern of vortexes.

Across from Winter Drawing / Drawing on the Snow, the video work A room of stone mirror— from The Post Gallery is displayed, which was created during Ishida’s stay in Ibaraki Prefecture. In this video, a green ventilation fan on the wall rotates occasionally and lines get drawn on the wall with water and chalk as if the rotation created those lines. To the right hand side of it, another video work Billowing Light 2  is projected, showing constantly changing billows. As I have described so far, Winter Drawing / Drawing on the Snow, which is pointing out the circleness of the building, and two other works related to vortex are placed together in the first part of the gallery. This gives the viewer an impression that for Ishida the arc and circular shapes of the ACAC building and vortex are related.

In the middle section of the gallery, the work Light on the Arc, which was created during Ishida’s stay at ACAC, is displayed. Similar to the drawing animations he has made in the past, this work shows the process of lines being produced while the early-spring light of March is coming in from the gallery’s upper windows and moves over the frame.

Talking about the works shown in this exhibition, Square Window and Between Tableau and Window both have a square window and paintings on the wall or on the tableau that try to transform, modify, and seep through the square in the videos. The paintings go beyond the tableau and advance onto the wall, trying to nullify ‘inside and outside’ set by the frame of the tableau. However, the painting lines never goes over the canvas in the new work, on which Ishida has painted the actual configuration of the gallery space. As we watch the video capturing the canvas from the beginning, organic orange and yellow lines cover the canvas for a while. A few times in the middle of the video, a cross shape appears, as if made by the light casting a shadow of the window. Afterwards, an arc shape painted with green, blue, and white lines, resembling the gallery’s floor, appears and then the wall surface painted in the same style appears in clear perspective. They eventually get covered by white in “munyu munyu”[1]. But unlike the lines in Between Tableau and Window, which completely cover everything, in this work munyu munyu only cover the previously painted lines to the extent where they faded but still visible. In the video Between Tableau and Window, it seems that time, space, and Ishida’s action were painted on and encapsulated into the wooden panel. The wooden panel shown along the video has thick layers of paint, representing physical accumulation. Furthermore, the panel is painted over with white. As a result, it contains all the things that took place during the production, but what was painted can only be seen in the video. In contrast, while also containing the action, the video Light on the Arc shows the space where the action took place painted onto the canvas. If the panel in Between Tableau and Window was thought of as a projector projecting the white light, which includes all colors of lights, accumulating all Ishida's actions, then we could say that the canvas in Light on the Arc can be thought of as a camera framing the landscape in front of the lens.

In the Light on the Arc video, the window existing in space in reality is not captured. Instead, the canvas plays the role of the window and the frame in this work. Therefore, the lines must not go beyond the canvas and the framed landscape must have been contained within the canvas.

Passing beyond Light on the Arc, the viewer sees the sculptural works Sculpture / 4:3 and Dance and the video work Transmitted light / EMAKI at the end of the arc-shaped gallery.

The series of sculptures Sculpture / 4:3 placed on the lower pedestals are lit from the top at an angle so that as they go towards the back they cast longer shadows. These shadows lead our eyes towards the shadows created by Dance, cast on the back wall. In contrast to the painted pieces of Sculpture / 4:3, Dance is monochromatic and composed of many sculptures concentrated together on the floor, which cast complex shadows. Above these sculptures, the video work Transmitted light / EMAKI, in which the images keep moving upwards, is projected. Similar to the relationship between physical films and moving images created by casting light onto the films, the sculptures (physical objects) create the shadows (images, which are non-physical).

The video work Toy, which is displayed as the very first work at the exhibition entrance, was created by turning the photographs of the sculptures into an animation. Here again, the physical three-dimensional objects (the sculptures) return to the non-physical video images.

In the email interview[2], Ishida talked about the experience of using a fretsaw to make the sculptures and how they made him remember the surprises and joys he felt with making drawings in his childhood. He also talked about his childhood episodes in the artist talk for this exhibition and in an interview in his past catalogue “Billowing Light”[3]. For Ishida, who has been drawing with the impulse to express undefinable things existing at the very bottom of his unconsciousness at the spur of the moment, it seems impossible for him to ignore the connection between the concept of his own identity and the blurry memories of his childhood. In this sense, as the title implies, the work Toy, in which the artist freely played with the plates cut with a fretsaw and captured the changes happening in the play, functions as a trigger to wake the inner child in the artist and as a lighthouse omitting light signals in the darkness.

To Conclude  – Vortex of Flow of Life

In his book “Lines: A Brief History”, where he freely examined the lines created from different activities of humankind and other creatures, Tim Ingold described about the drawings made by the Warlpiri people in Australia. He wrote: the circle and spiral they use to draw a certain place are “the very flow of life circling around one focal point”[4] and the center point of this place is “the absolute halt point, where their ancestors would go back to the ground where they came from”[5]. As the exhibition title “Light on the Arc” indicates, I could experience Ishida’s flow of life continuing from his inner child’s time on the arc: part of the ACAC building, consisting of the circle and spiral, which are interpreted as a vortex in Ishida’s mind. When imagining what is in the center, the last scenes of Winter Drawing / Drawing on the Snow come to my mind. In the videos, Ishida is making drawings by spraying water, but as time passes, water evaporates and the drawings on the ground disappear. Although the drawings disappear, or actually because the drawings disappear, Ishida is intently making drawings in the center of the vortex created by the building. He is doing it because he knows that what came from the ground would go back to the ground in the center of vortexes. 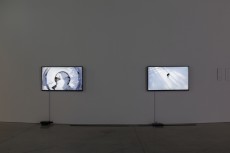 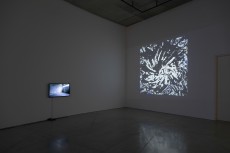 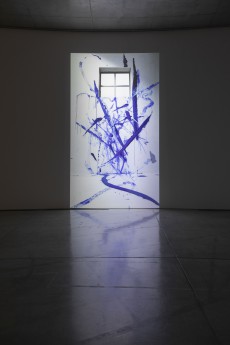 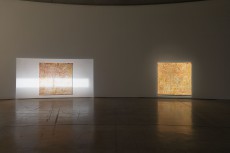 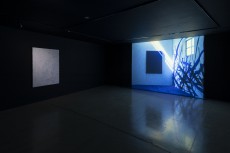 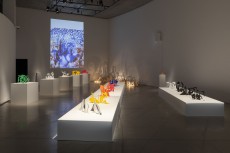 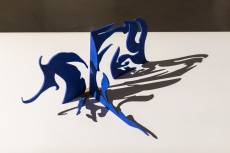 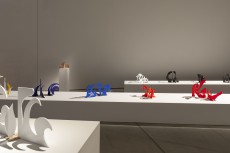 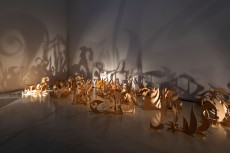