Rakhi PESWANI produced a series of independent yet closely related artworks for her exhibition, something clearly illustrated by the titles of each piece. Primal Reminders (Our Bodies), a work of embroidery, hung on several walls of the exhibition hall. Primal Reminders (Experience of Innocence), which depicts multiple insects on postcards, sat on a table in the space. Her third piece, Primal Reminders (A Precarious Balance), a mobile, hung from the ceiling.

Primal Reminders (Our Bodies) consists of about 30 pieces of cotton affixed to the wall, each embroidered with the word "your" followed by a descriptive feeling, inviting the viewer to reflect on different bodily sensations. The embroidered words, such as “itch,” comprised a collection of both physical and mental sensations. “Angry” is embroidered in shaky lines reminiscent of a body trembling with rage, while “silence,” which sits quietly in a corner of the cloth as if waiting to disappear, evokes the sensation of holding one’s tongue. Peswani’s intricate embroidery shows us multilayered emotions and sensations that we have a hard time recognizing on our own. They unravel our bodily sensations, both mental and physical, and convey just how linked we are to our outside world, which constantly stimulates our minds and bodies.

To look at Primal Reminders (Experience of Innocence), you first take off your shoes and sit at a low table, much like you may if you were relaxing at home. Spread across the table are an array of cards that bear the likeness of various insects. When you look upon the insects, each drawn with delicate brushstrokes, and open the top-fold cards to read what is written inside, you do so as if handling a small life, gingerly taking it in your hands and observing it with care. It reminds us of a time when we observed our environment with sincerity, like a child seeing an unknown insect in the palms of their hands for the first time. These precisely drawn insects hint at a young, innocent, and insatiable appetite for observation. They also remind us of how our minds and bodies respond to the stimuli of the outside world and build relationships with it.

Primal Reminders (A Precarious Balance) consists of six objects—twisted burlap, a bundle of tree branches, a bean-shaped cushion, wooden objects whose shapes resemble leaves and animal bones, and a bulging jute bag. The installation has an excitement about it—touch one of the objects and all of the others will move with it, transforming the look and feel of the entire space. The first two artworks share a common thread of using memory to evoke physical sensations. In contrast, Primal Reminders (A Precarious Balance) stimulates the physical senses in a more direct manner. The viewer naturally moves their body to touch a certain object and observe it more closely or to view the mobile in its entirety, and their impressions of the artwork continue to change with varying tactile and visual perceptions. In many respects, the mobile also represents the modern Indian landscape following the end of British colonization.

Peswani has produced many works that stimulate the visual and olfactory senses to conjure up images of labor and social environments. One such example may be Fruits of Labor (A Monument to Exhaustion) （fig.1）, exhibited in 2013 at the Zhejiang Art Museum in China, where large muslin sacks hung like drops falling from a ceiling, filled with coffee grounds and tea leaves. The contents made stains in the bottom of the sacks and emitted the strong smell of stale coffee and tea. Peswani says that seeing migrant workers boarding buses with bulging sacks is part of the daily landscape in India. The sacks in the work, created by observation of daily commute, became representational tactic to bring the heaviness and sweat of migrant labor in the cities, as a trope within work. For viewers to see Peswani’s drawings, which were deliberately hung on the back walls, they first had to navigate the mass of calico sacks, which is reminiscent of making one’s way through the smell of sweat on a crowded commuter busi.

Peswani again employed bulging sacks to evoke similar imagery in Primal Reminders (A Precarious Balance), which she created during her ACAC residency. The mobile includes a gnarled jute lump, a manifestation of physical human energy; a bean-shaped cushion from which wires sprout to represent budding plants; a bone-like spine of wood to represent life; and a bundle of dried wood, which is commonly used as fuel in India. Together they make up a chain of interconnected objects and events that continue to move and shift in our modern era of mobility.

Peswani’s artworks prompt us to understand how relationships between humans and our surroundings are built and linked. They cause the viewer to return to fundamental values that we as humans use to relate to the world around us. 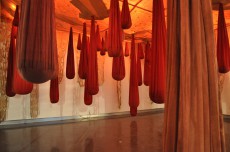 fig.1
Fruits of Labour (A Monument to Exhaustion)
Exhibition at Zhejiang Art Museum, 2013.