Small Yet Significant: A Presence in Place

Clémence CHOQUET and Mickaël GAMIO’s washitsu (slippery area) features rubber mats placed in the center of the gallery, laid out to resemble a Japanese-style tatami room, which conveys a sense of stability. But the mats partially overlap and undulate, hinting at plate tectonics and the movement of water and calling to mind unsettling images such as earthquakes and floods. A single sheet of glass separates the exhibition space from the Water Terrace. The terrace blends in with the surrounding landscape and seems to confront the images of water and crustal movement in artwork, which evokes the geographical relationship between Japan and the seas that surround it. Choquet and Gamio’s installation, which spanned both the interior and exterior of the ACAC gallery space, was built to be subtle, combining multiple sensations and hinting at the spaces between stability and instability. This allowed the visitors to experience the architectural space and, one by one, discover the relationships between these spaces and the works within them.

Black and yellow tiger rope is glued to the concrete floor [fig.1], forming a wide frame around the rubber mats that stops visitors near the entrance, as if to warn them to keep their distance from a hazardous material. It serves not only to create a border between the exterior and interior, but also to show the installation as a work that incorporates the architecture. You could also say it is a mechanism that reminds visitors to pay attention to the entire space without focusing solely on the artwork in the center.When visitors proceed straight ahead along the rope and look at the space from the opposite side, they notice a green light atop the low protruding ceiling. The light, whose presence is all but hidden in the daytime, was remind viewers of emergency exit signs that we see each day but hardly notice. Exit signs are always on, just in case of emergency. What an inorganic, artificial, and quiet presence. The earth rotates the sun goes down, yet the exit sign cannot change. Its green glow only strengthens in the absence of the sun. The light, which was installed in case of emergency, induce a sense of both security and anxiety while enveloping visitors in a spectacular and quiet cycle of time.

When the sun goes down, artificial lights reflect a mirror image of the architecture on the surface of the Water Terrace and reveal a basement under the water. The sight of a fictional, seemingly bottomless basement, which dances eerily on the water, symbolizes the instability that Choquet and Gamio’s work represents. In the right corner of the gallery near the window is a mirror placed on the floor alongside the rope. It reflects a pair of slippers affixed to the ceiling and appears to flip the room upside down [fig.2][fig.3], imitating the underwater scene from the terrace outside. Along with an unstable feeling of inversion, it also captures the elements of the adjacent pool of water, blurring the boundary between interior and exterior.

Outside the windows, visitors could see a pair of rubber boots facing a photograph of the horizon on the concrete wall of the Water Terrace. They maintain their distance from the boots, which are separated by the water and the window, and are reminded of someone looking at the picture, perhaps even themselves, which seems to invite them outside for a closer look.

A wall in the Water Terrace cuts into the curving arc that forms the gallery, creating a corridor that narrows as it extends inward toward the center of the terrace. The sharp lines of the stepped Water Terrace help to emphasize perspective even further. The photographs transform the outdoor corridor into an exhibition space that entices visitors to have a look at the water’s edge, whose expressions change quietly with the sunlight that shines from behind. The photographs exhibited in this peculiar space were printed on extremely thin material, much like the political campaign posters one often sees in Japan, and were glued directly to the concrete wall. Though the photos showed images of a vast ocean, with a slight change in perspective, they could also vanish, becoming one with the grey wall when their surfaces would become wet with condensation in the morning and evening.

Rubber boots are provided for visitors to walk into the Water Terrace. When visitors don the rubber boots and walk toward the photos, they feel the resistance of the water slowing their movement and hear the sounds of water reverberating off the concrete walls. This shifts their attention to the physical senses, transforming the very act of walking into a sensation. The tranquil, cloudy horizon captured in Neither here nor there reveals an infinitely distant landscape. Though the visitor’s body may face a concrete wall, their consciousness is transported inward to the self and outward to nature. Mind the Gap―千畳敷, 1000 tatami mats size shares the same elements found in Washitsu (slippery area)―water, volcanoes, and tatami. Senjojiki, located in the town of Fukaura in western Aomori, is a marine terrace lifted out of the sea during an earthquake centuries ago. Its sheer vastness is what earned it its name, which can be translated as “the place of 1,000 tatami mats.” Senjojiki is located due west on the other side of the photo, so visitors stare through the actual scenery in the photo in the direction of the coastline that lies beyond. Perhaps the reason why visitors become so immersed in the horizons in these photos and can extend their imagination far past the concrete is because it is an installation based on fact. The installation elicits strong reactions, which only amplify this strange reality where viewers find themselves wearing rubber boots in a pool of water.

Choquet and Gamio’s installation carefully places their research findings within an architectural space rather than an exhibition that takes advantage of the space itself. In doing so, the space itself seems to transform and more strongly suggest the relationship between the space and the objects within it. Though the artworks are spread throughout the gallery interior and exterior, they forge a quiet harmony with one another. As visitors walk through and experiences each piece, they decipher the relationships between them, one work at a time. The artists pick up on seemingly unchanging natural phenomena and trivial things that go unnoticed in everyday life and, by connecting them, serve as go betweens to reflect certain aspects of society. Choquet and Gamio allow their visitors to pick up on strong, sweeping, and unceasing movements that our human senses can barely perceive. 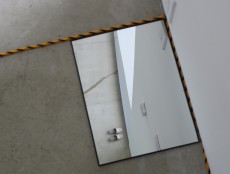 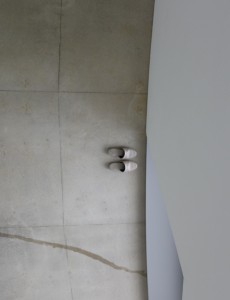 fig.3
Washitsu (slippery area), detail (a pair of slippers set on the ceiling) 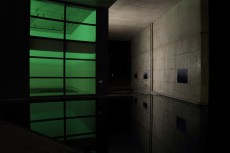