From the Blind Spot of Perception

“You shouldn’t make something completely beautiful,” ANG Sookoon would often say during production. She said it while making her studies in the studio, and she talked about it while polishing a shining artwork that would put the finishing touches on her installation.

Certainly, we have gotten used to seeing beautiful things. The high-definition images of today communicate to us with intensity, but with the slickness of the screen we lose a certain texture and forget about the space between us and the objects we see. Images are so smooth and elusive that they soon slip out of our consciousness unnoticed. Instead we tend to notice things that change our perceptions through a gritty sense of uneasiness.

No Future No Past is a work comprised of two LCD screens. The displays are placed side by side in portrait orientation, with separate images displayed on each. The image on the left looks like the undulating surface of the sea, while the image on the right is of a big stone or a pillar in ruins. From the grainy look of the video, it is difficult to infer when the video was taken, but it looks like an image from long ago or a scene out of a science fiction movie. Each image repeats, and as you watch, you lose track of time and gain a sense of comfort, one akin to enjoying a natural landscape.

In actuality, the apparent sea is actually an undulating plastic sheet, the image on the left a small clay sculpture that has been magnified. Fellow resident artist Yukari MOTOYAMA had left the plastic sheet on the floor of the ACAC’s studio, which Ang captured as she watched the sheet rise and fall in the breeze of the air conditioner.

Ang is able to seize upon such trivial events and imbue them with a slight sense of discomfort to create her artworks. The screen on which the sculpture is displayed seems to be static but will sometimes flicker, its color and lighting changing ever so slightly. The change is slight enough to make you feel as if the flicker was just you blinking yet strange enough to make you pause for a moment.

Spectre is a work of free-standing, hollowed-out brass panels. At two meters in height, the towering shape is reminiscent of a monster or ghost, and its shining golden appearance feels mystical, like a god or an angel. White traces on the surface enhance the piece’s three-dimensional effect, and its gentle shape recalls the form of both a bedsheet ghost and the draping cloth worn by the Virgin Mary. However, the shape is, in fact, that of a hanging bathrobe.

The shape of draped fabrics, together with the sheen and texture of brass, evokes common imagery of angels or demons. Ang points out just how much we subconsciously rely on memory for perception without observing what actually lies right in front of us.

No Future No Past and Spectre are related to Ang’s past works (*1) (*2), but her third piece, titled Moonlight, shows another side of her creative process. Formed from negative imprints of trees around the ACAC, Moonlight appears, at first glance, to be a black mass about as thick as a pair of legs. But up close, the viewer notices its rough surface and inner cavity and begins to see Moonlight as an old tree lying in decay. The viewer is drawn inside by a pale light that pours through several holes in its surface. Its distorted exterior bears the sadness of old age, yet inside a black sheen hints at an inner life force. Similar to how the viewer’s gaze moves from the outer to the inner surface of the artwork, its ambiguous composition of boundaries between exterior and interior seem to symbolize the ambiguity of life and death. These images seem contradictory, yet, at the same time, the work exists as a single material object, which is strangely attractive. Ominous yet beautiful, Moonlight draws the viewer in.

While we may occasionally appreciate plant life indoors or be touched by the beautiful greenery of a lush forest, we hardly give second thought a rotting piece of wood. Its existence has been forgotten and reduced to a hollow shell of thick bark. The wood lies reticent on its side, a blackened sculpture for all to see and ponder. Moonlight’s shining black surface shows us a figure full of life and shakes our perceptions of the boundaries between life and death as if to shatter our usual dismissal of such trivial things.

Ang’s works are full of questions for interpreting existence. She adds a little bit of uneasiness to commonplace images of things that would otherwise go unnoticed, pointing out how age-old filters influence our interpretations of the world. Just as literature can show us new worlds by arranging familiar words in unexpected ways, so too can a slight uneasiness cause us to question our usual perceptions. 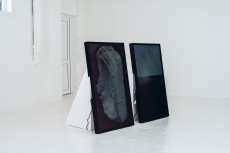 No Future No Past
Diptych video installation, 2017.