Ambiguities in the landscape and the body

Han’s works wait for us to think. When we keep watching them and thinking over them, his works produced this time make us find ourselves bound by our preconceived ideas before we are aware.

Then, how are they designed? I would like to think about it looking back on the two works of Swaying Vertical that he made this time and Vertical Hand that he performed on the last day of the exhibition.

The act of raising one’s hand represents the intention of participation or assertion. In the work Swaying Vertical (hands), is the act of raising a hand in accordance with the individual’s will or under coercion? Do the hands getting tired and swaying reflect the weakness of will or resistance to compulsion? If we take them as trees swaying by the wind and hands (people) forced to be raised, then the work seems to represent the individual’s helplessness toward groups and society. On the other hand, the way how each hand is swaying against gravity varies and they seem to be struggling mentally and physically against the uncontrollable situation respectively.

Moreover, the individuality of each hand is clear, but as the face is outside the picture, the expression is unknown. There may be a brave face with a sense of mission or a face suffering coercion patiently. What is suggested here is a situation in which the body is moved by the request of society, not by its own will. In other words, when we accept the surrounding requests as a social person, even if we eventually move the body with our own will, it refers to the situation in which an uncontrollable body emerges.

Also in Swaying Vertical (alone), we can imagine the contrast between individuals and society/group. The body that continues to raise a hand seems to claim something to the woods, another person, or stretching straight like tree trunks to be assimilated into them. In this sight, individuals who continue to display resistance to the surroundings or cater to others’ wishes are overlapped. Finally the body’s power comes off, the hands are loosely dropped and the lifting act stops. That act seems to have given up resistance, obligation or to have been set free, and the body appears as it is. The repetition of repulsion and compliance indicates the uncontrollability of the body, though it is not clear whether it is due to one’s own will or forced from the outside.

Vertical Hand [fig.2][fig.3] took place on a road extending from the creative hall to the woods on the east side. At the entrance of the winding path, the sculpture of a hand was placed on a white pedestal, and the visitors were waiting, looking toward the sculpture with the woods in the background. After a while, Han appeared from behind the woods, and approached the sculpture while picking up fallen branches now and then. When he arrived in front of the sculpture, he raised the sculpture hand towards the woods and stood still while lifting up the hand vertically. After being watched for about ten minutes, he took down the hand, and returned to the woods while carrying the picked-up branches back to trees in the woods.

Here again, we can interpret it the same way as Swaying Vertical (alone), but the very different thing is the presence of the audience. Looking at his back, they were facing the same direction as Han. The sight seemed to be as if the visitors were declaring something with Han representing a group, and also, if we see that the woods and humans were facing each other, it suggests a scene in which a reconciliation of different species is appealed. In that case, the sculpture looked like a sacrifice, while the act of returning picked-up branches to the trees can be interpreted as an act of returning what human beings took away from the woods back there again. If so, Han appears to exist between the woods and humans coming and going between the two societies freely. Han’s appearance symbolizes the body swaying in between the uncontrollable society and the controllable body, that is, the very existence of us.

The relationship between the society and the individual has been considered to be clear, but when we are in front of Han’s work, the boundary between the two becomes blurred each time we think over it. In other words, his scheme is to show us two ambiguities introduced at the outset of our assumption that the landscape is equal to an uncontrollable society and the body is equal to a controllable individual. 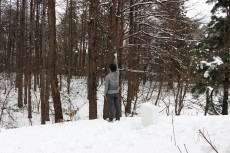 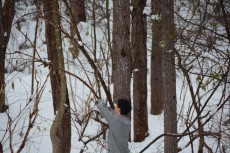