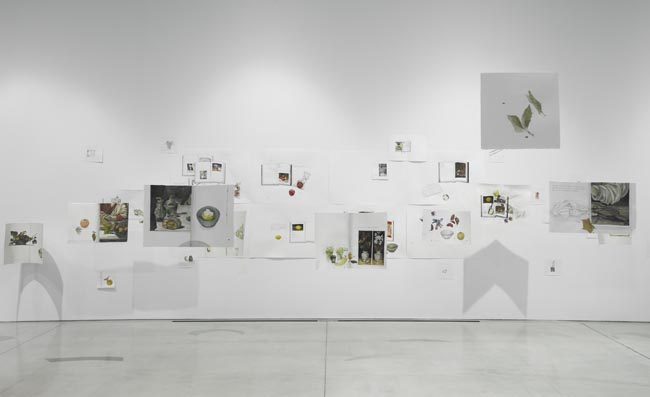 Painting as an Open Book

Renata CRUZ works with images from everyday life—apples, flowers, fallen leaves, and tea cups—together with passages of text from paperbacks and paintings from art books. They are rendered and replicated as watercolors, carefully drawn on different-sized paper. The everyday items, drawn in the same dimensions as the immaculately replicated pages of the open art books on which she places them, mix within her paintings to create two juxtaposed motifs—that of the art books, and that of the everyday items. In the margins are accompanying sentences about time, taken from works such as DAZAI Osamu’s Tsugaru and Jorge Luis BORGES’ Ficciones and A History of Eternity. As the title of her work forever and a day indicates, the axes of past, present, and future intertwine within the ample margins—sentences that speak of past and future are separated from their context and juxtaposed with motifs based on daily life that seem to be of the here and now as well as on numerous recreations of traditional European allegorical still lifes.

These works are exhibited as an installation, with large paper drawings of open art books hung at random on the main gallery wall. Stepping back from the wall, we see countless watercolor paintings and fragments of text floating in the air, as if they had spilled out of the pages of the open art books on the wall. The large margins in each of the paintings share an affinity with the wall surface and serve as a bridge between the physical space and the painting space, gently connecting the three-dimensional space outside the work with the two-dimensional space within.

Cruz mainly draws with watercolors on paper, then develops her works into installations that mix physical space and virtual imagery. Text is frequently appended to her work, with books—as both material and symbolic entities—referenced in content as well as form. Her work is characterized by drawings that appear realistic yet uniformly lack mass, not seeking the detail of superrealism. In Lemon, the object emerges with paper-thin presence within the painting’s wide margins and is accompanied by a piece of literary text. Rather than a faithful reproduction of the object’s physical properties, Cruz uses watercolors to cast a confrontational layer of time against the object, seemingly drawing only the outer surface in order to transfer its non-material figure as a virtual image.

Cruz drew several works for Time For A Change using the exchange system that she has developed over several exhibitions in different countries. Cruz has participants bring something of sentimental value, which she draws meticulously in reproductions similar to the illustrations you might find in an encyclopedia. More important than the object itself is the story behind it, and Cruz spends time listening to each person’s narrative, which often becomes passages of text in the margins of these artworks that hint at the stories behind the objects. Though accurate and sometimes encyclopedic portrayals, her artworks go beyond their original shapes to conjure up an inner spiritual relationship between the objects and their owners.

Cruz often lends her drawings literary passages, but will also use her own words on occasion, writing them as if they were penned by someone else. Neither directly related nor completely unrelated to the images they adorn, the interpretation of the text and its relationship to the image is left open to unfold in any direction. What links the two—the object and the text—is the imagination of the viewer, who must try to fill in the gaps in a fragmented context to create their own narrative. By creating jumpable gaps between her still lifes of familiar, personal objects and passages quoted from literature, she gracefully transforms the story of both the artist and the supplier of the object into a more open-ended, universal narrative. Thus, even as physical, personal consumables, Cruz’s objects come to possess symbolic, even universal properties on a single sheet of paper. They express a fleeting moment in time, yet they are also eternal.  In forever and a day, she allows us to read symbolic meaning in the daily objects that frequent her work. Her work makes an even stronger impression when we realize that it is reminiscent of 16–17th-century European still life paintings that combine aspects of transience and eternity.

The ambiguous connotation of her artworks is superimposed with books, which Cruz often references in her work. Cruz is sympathetic with the ambiguity of books, paper, and beauty—though physically fragile and easily destroyed, their contents and spirit possess an indestructible strength.[1]  They may be written in trivial letters on humble pages of paper, but books connote a resilient, tenacious knowledge and spirit. Similarly, through her work we can find beauty and knowledge in the everyday things around us. Seen in this light, it is as if the contents of a book have spilled out to form her installation, which we can interpret as a recreation of the reading experience. Just as the act of reading belongs to a personal time and experience, so does the act of art appreciation. But the transformation of reading into a work of art opens it up to the world.Within the space outside her drawings, Cruz attempts to reconstruct the proximity that reading brings between the spiritual world and everyday life. 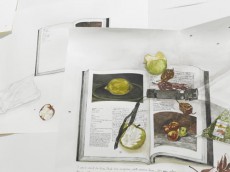 fig.1
"Forever and a day"
water color on paper
installation,2016. 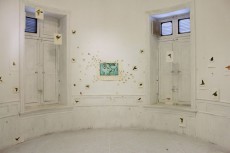 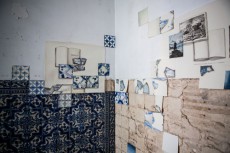 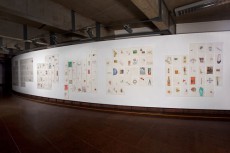 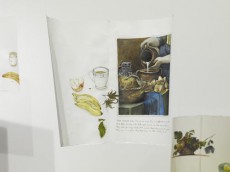 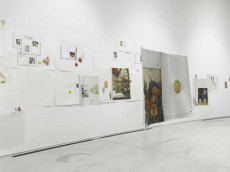 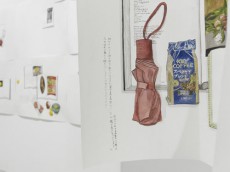