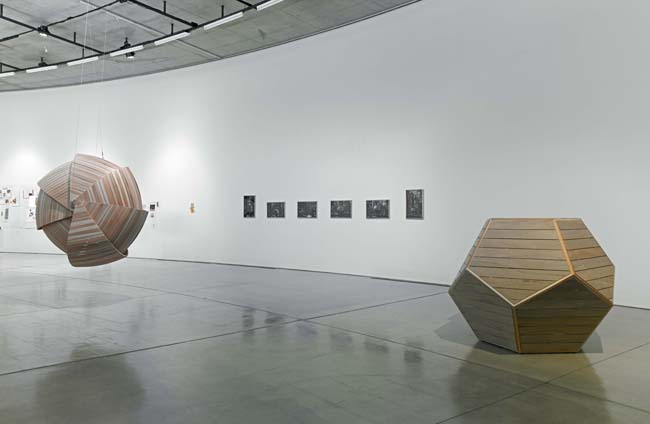 Jonathan SITTHIPHONH produced two sculptures for the 2016 Autumn Artist in Residence (AIR) Program. As their title Cocoon suggests, they are pupa-like structures with hollow interiors. One of the cocoons is a type of micro-architecture just large enough for one person to crawl in. The other cocoon has a wearable wooden frame made to mimic an insect’s shell and can be opened and closed like an accordion. Gaps at regular intervals within their structures allow moderate light to reach the interior. Both are small spaces that force you to hunch down and look inside yourself, which he uses as devices to promote future change through introspection.

The photographs displayed together with the works show the artist within, or wearing, the sculptures. The thick, raised frames that surround the photographs, made of the same wood as the sculptures, show that they are a piece of the sculptures themselves. The array of photographs connects the function of the devices with the imagination, and the empty shells on display give off a presence, without showing a human shape. Is this just the trace of some former transformation, or is the transformation still to come?

In his previous work, Sitthiphonh has produced wearable, robot-like wooden sculptures and explored the mechanism of movement and the interaction between person and machine (fig. 1). In contrast to his previous work and in consideration of the exhibition theme, Time For A Change, he has focused on the moments when people transformation. It is a prologue into the process that produced his earlier works.

Sitthiphonh himself calls the studio where he usually works his “laboratory.” There his failed projects stand alongside current works in progress as he endlessly improves them unless they are out on display.1 His attitude is like that of both artist and researcher, perhaps influenced by his penchant for making things since childhood and in part by his academic background in science. Sitthiphonh’s art is shaped by constant experimentation with forms proven by science and aide by a combination of imagination and the skill to create with his own two hands.

During his stay, he would begin working on an idea as soon as it came to him, acting immediately without planning out the details of his design. Though not quite the chemical reactions of a true laboratory, with cardboard and wood chips from the Creative Hall, his ideas instantly turned into models. While there is no shortage of ideas with him, it can be difficult to give an immediate shape to something that exists only as some unseen imagination. Designs and calculations can be found on the internet of course, but even if the plans are accurate, working with actual wood is different, so one slight miscalculation can make it impossible to achieve the desired form, and it becomes necessary to make one wooden model after another.2 And when working at other resident productions, he must explore production methods according to the properties of the woods used there. This time, to make a shape that combines thin, curving pieces of wood, he repeated trial productions many times looking for a suitable material that would bend but not break.

Despite its physical hardness, wood retains the same conceptual softness of any other living creature. Sitthiphonh uses it in his art to great effect beyond merely expressing an opposing relationship when he gives an artificial shape to this natural material.

His past works include a wearable sculpture with a wing mechanism (fig. 2). The wooden wings are reminiscent of Icarus, who was outfitted with wings crafted out of wax and feathers. But humans cannot fly when outfitted with Sitthiphonh’s sculptures. Despite the capabilities of the mechanisms themselves, the devices are devoid of function when rendered as wooden sculptures. Rather than enhance physical function, the devices actually restrict and hinder their user.

This failure to achieve a designed function connotes the contradiction that occurs when humans try to become something more than human—the absurdity of surpassing humanity by human means. In this respect, Sitthiphonh’s failures of function are not in fact failures but questions. He intentionally does not allow them to function, posing to questions the viewer through the presentation of contradiction—devices stripped of their function. A loss of function invites a look into the aesthetic of the mechanism’s design. It urges our imaginations to fill in the rest of the story. And so these sculptures start to function as imaginary mechanisms.

On the other hand, the power and comicality with which these mechanisms move succeed in humorously encapsulating a paradoxical view of humanity and an inescapable sense of emptiness that accompanies a device that must be left incomplete. But the human element hidden behind the mechanisms gives them a certain charm. From the perspective of sculpture, the larger the gap between the logic and delicate craftsmanship behind a work and the frailty of its function, the stronger the impression.

Sitthiphonh has continued to use irony to question the evolution of technology and what it means to be human. In trying to exceed the abilities given to us, we are restricted. In other words, we can only be human—nothing more. However riddled with contradiction, humans continue their pursuit of evolution. This view of humanity mirrors Sitthiphonh’s unique artistic stance to endlessly improve his works. While this may be considered normal for artists, he continues to improve his works in his laboratory according to new skills learned and experiences gained without a definitive final shape or form. Additionally, he also reveals the processes within his work as he creates. His attitude shows a way of life as well as a joy for the act of production itself. It is almost as if he is offering one possible answer to the very question he poses.

In his cocoons, people enter a process of transformation and evolution. They envelope the entire body, which is distinct from his previous works, many of which were designed to be worn on the body as robot-like extensions of the limbs. From outside, we lose sight of the human shape, and that allows us to imagine a transformation into something entirely different taking place inside the cocoon. We are once again reminded that the human imagination, which is important for these devices to work, allows us to march forward into the unseen, even if it cannot completely stamp out contradiction and impossibility.It is human nature to use this power to make imagination a reality.

The questions posed by the artist contain a message that encourage introspection and transformation. At the same time, the egg-like shape of his cocoons is symbolic of hatching new ideas through imagination. There is no doubt that his next devices will emerge reborn from their cocoons and begin to move with the imagination of those who see them.

1 Lecture during exhibition-related event on December 3, 2016 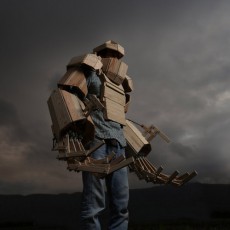 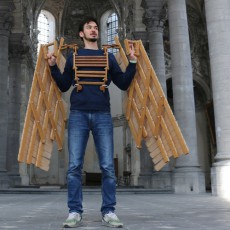 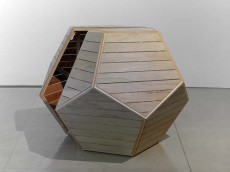 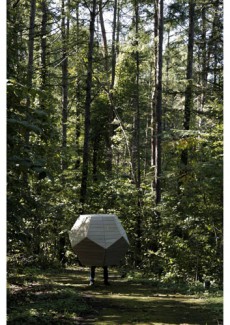 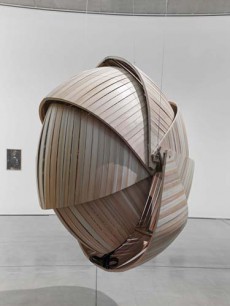 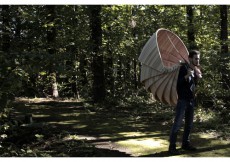 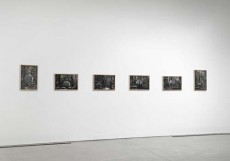