Large figures painted on the gallery wall that is six meters high are somewhat reminiscent of humorous hieroglyphs. Painted with concise symbolic forms in flat colors, the figures make the boundary between the painting space and the real space softened by making the best use of the ground color of the wall. Contrastive colors of black and white and the reversal of the figure and ground merge and connect multiple shapes into a single form like a trompe l’oeil (trick of the eye) as in figure-ground reversal, and convert each visual image into a symbolic image with complex meanings and stories.

The mechanism to obscure the boundary between the real space and the painting space is not just due to the hybrid of the figure and the ground. The entrance to the work whose motif is a house standing over both the real space and the painting space is the first step. (fig.1) Multiple black threads are extending from the figures painted on the wall toward the house motifs of different materials depicted both on the wall and the floor. Thin black threads are insubstantial, and it is difficult to distinguish their qualitative difference from the shadows of the threads and pencil line drawings of the figures. The shadows, threads and drawing lines are mixed together, and the “black lines” come and go between the two- and three-dimensional. Painted in a corner of the gallery on the walls touching at a right angle and the floor in contact is a semi three-dimensional black house and a white character outlined on the black background. This mural also makes the two- and three-dimensional ambiguous. From a life-sized silhouette drawn in the center of the black house spread white lines in radial. (fig.2) By inducing visual illusion and causing a physical sensation of being sucked into the center, the white silhouette is emphasized in such closeness as to be the spiritual mirror image of the viewer standing in front of the work.

In the installation, though the viewer has to walk around the space avoiding a part of the work protruding in three-dimensions, they would feel as if they sneaked into the painting space as they visually follow various tricks blurring the boundary between reality and unreality as well as the large painting which looks like enveloping them. Echoing quietly in the venue is the sound of water drops, which creates a meditative mood. The theme of the work Searching for: Spiritual Home is human’s spiritual search for a peaceful place, which one can call ‘home’ in one’s mind. Interested in human’s inner exploration, Lee recognizes that memory and its record constitute a spiritual being having a human life experiences. Thus explored in her work are images and work structures that tap into people’s memory and encourage the viewer to experience viewing of works.

The source of each figure painted in this work is Lee’s personal memory and history. The figures were chosen from those kept in her drawing books, which she calls ‘Book Project.’ (fig.3) Around 2004, Lee began to produce continuously countless drawings based on the themes of memory, time and space on pages of various books. Her books and reading are perceived as memory or a record of life and a reminder of its memory. When drawing on book pages, she consciously enters into dialogue beyond space-time with the content of the book or the writer of the book.

The “canvas” on which the letters are written does not provide a neutral painting space from the beginning. Figures that Lee depicts there are drawn with a relationship with the existing space created by the letters on the pages and the content of the book. In most of Lee’s installations produced in recent years, images chosen from this ‘Book Project’ have been developed into installations depending on the characteristics of the site and space of display. This understanding of relationships between book pages and images is also applied to a grasp of the installation structure and space. Moreover, thinking of Lee’s profile of having learned calligraphy since childhood and developed artistic interest from her interest in calligraphy [1], figures resembling hieroglyphs, a grasp of balance in plane space, and coloring of black, red and white, as well as the contents of the depicted figures, we can understand that all of them spring from Lee’s physical and spiritual memories as the source.

In a calligraphic work, while maintaining the meaning that a letter originally has, differences in its form depending on the brushwork, layout and the place where the letter is written determine the writer’s expression, and such morphological characteristics convey another impression and content not dependent on conventional symbols. The relationship between letters and a calligraphic work overlaps with the relationship between the images drawn in Lee’s Book Project and development in her installations. The artist creates her own new letters every day, and pursues the possibilities and developmental expressions of ‘letters’ through her installations.

The ‘new letter,’ however, is not a letter indicating a specific meaning. By condensing dual meanings or functions into its portion, or by partially fusing one form with another, she makes different meanings emerge and tries to make the viewer, who gets feedback on such meanings within themselves, confront their inner unprotected unconsciousness. In such an approach, her interest in psychoanalytic or surrealistic unconsciousness can be observed. Images recalled from symbolized images become each viewer’s stories created by their memories and experiences. The title of the work Searching for: Spiritual Home does not indicate specific forms used in the work, but it is presented to give a psychoanalytic impact on the viewer’s mind as seen in works of this kind. Two different dimensions of the painting space and the viewing experience are fused by the title. 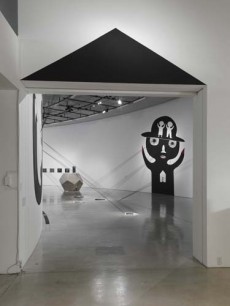 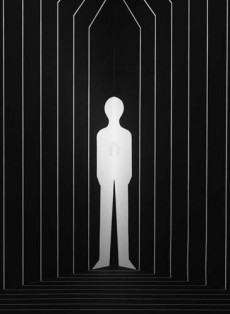 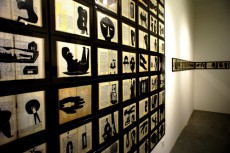 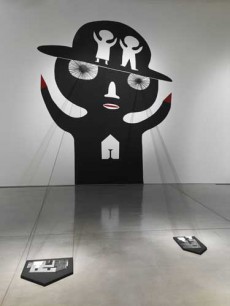 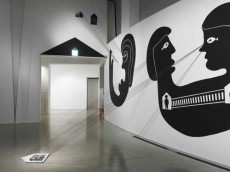 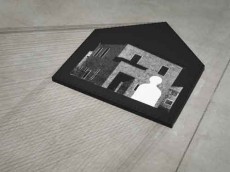 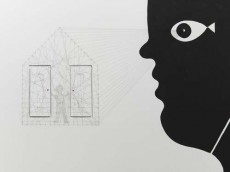