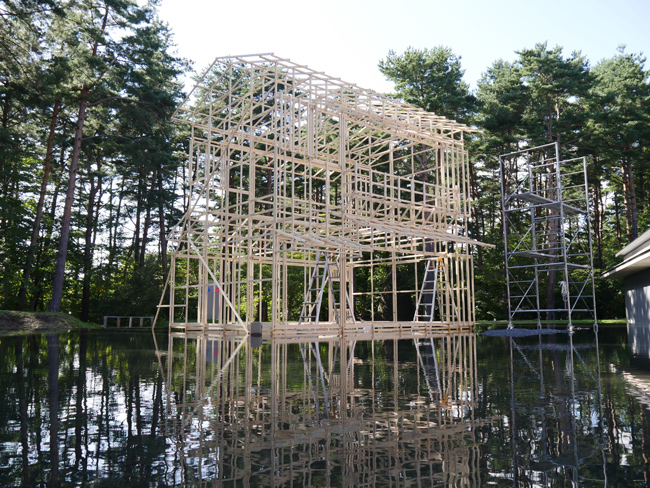 Carrying out research through architecture, KAMATA Yusuke has attempted to present again, in his work, the construction of a manmade context in history and modernization that his research involves. In this residency production, he developed his work from his research on Japanese houses which he has been thinking over in his mind for several years.

For the work The House, he researched into Japanese houses constructed for different reasons and purposes at different places in different periods, and by reorganizing the fragmented information that he acquired, he shows another appearance of the same building. In this work, the following Japanese houses are the subjects: a house existing in Japan and still in use, a Japanese house the United States military built in the Utah desert in the incendiary bomb experiment for attacks on Japanese mainland during the World War II, and a Japanese house built in Korea under Japanese rule between the 1910s and the 1930s which still remains there with some exterior renovations.

Thorough research and local data collection were conducted, but details of the materials are not presented in the work. The work consists of combined images and superimposed interviews of people who are involved (a woman living in the Japanese house in Tokyo, an old woman who lived in Busan until she was ten, a Korean woman whose relative used to live in the Japanese house in Busan, and an Aomori-based architect). They talk about personal experiences about the Japanese houses and their impressions. The historical facts as a result of the research are left implicit through fragmented images and words.

Before the production of the video, a structure of the same size as the Japanese two-story house was built using scantling in the middle of the Water Terrace outside the ACAC building. (fig. 1) The structure of the height of 7 meters is reflected on the water surface of the shallow pond, and presents itself on the water surface as a quasi-image of the Japanese house extending deep in the water. The relationship between the real and virtual   image was reflected on the structure on the video shown in the gallery. A six-meter high image is divided into two, and the house is turned upside down by the horizontal line in the center. It corresponds to the real image on the water and the reflected image on the water surface, which are suggestive of the real and virtual images of the existence of the ‘Japanese House.’ The drawing depicted in the space, or this structure like an engineering drawing, was burnt, destroyed and captured symbolically into the work.

To begin with, this very structure installed on the water is likely to be positioned as a virtual image of the Japanese house constructed in real space. The structure was built in the center of the pond, located between the high-rising northern woods and the gallery designed by ANDO Tadao with features of modernist architecture that effectively incorporates vertical and parallel. As it was placed on the water between nature and modernist architecture, the structure looks like a frame-like form lacking reality in the course of history when the style of wooden architecture established on the basis of the natural features of Japan is revalued because it is incorporated into the context of modernism.

From another point of view, a Japanese house as a symbol of the good old days that constitutes an archetypal image of Japan boasts being a symbol of Japanese identity. However, it was not evaluated for its indigenousness from a vernacular perspective (while it requires an outsider’s view). Here, Kamata points out a man-made movement during the war, in which Japanese wooden architecture was connected to the context of European and American modernist architecture, which began with Bruno TAUT’s evaluation of Katsura Imperial Villa, in order to establish cultural justification and ethnic identity through that evaluation. [1]

In his past works, Kamata explored the history of war and energy industry through architecture and attempted to present some kind of distortion in modernization. (fig.2) What he is trying to show in his work is not simply the other side of modern history or buried history during wartime, but it is probably a structure of power and force generated when local and global come in contact, which is revealed through such history. His interest can be also found in his earlier works, for example, in his A hundred definitions (fig. 3; 2009, reproduction in 2010). In this work are 100 cubes, each of which looks plane, connected to make one big cube. In this installation made as if they were drawn in space, multifaceted viewpoints are introduced. The work looks different from different angles. Behind it, there is ‘a forced viewpoint’ in the relationship between the work and the viewer when seeing the work, and so, different perspectives are presented in order to reveal such compelling power. It is an attitude that applies to his work in this exhibition as well, and his research repeated from different viewpoints is a means to counter such power, and the presentation of the parallel state is used as effective measures to bring the existence of such power to light. Various forms of Japanese houses built for different purposes at different times and places symbolize history and a context manipulated by using the similarity of form. And his work comes to show doubt about the way in emphasizing its legitimacy. The core of Kamata’s work is his interest in the close relationship between arbitrary globalization of domestic aesthetic sense caused by modernization and the establishment of national identity.

[1] According to Kamata’s lecture ‘Another History of Architecture’ given on October 30, 2016. 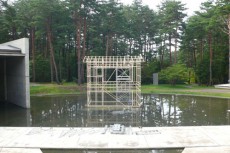 fig.1
"The House"
(the work in progress) 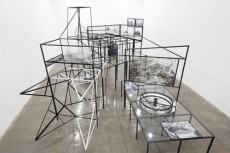 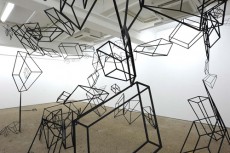