As you walk along the curved gallery of ACAC, you come to a small entrance of a ‘shed’ on one side of the back wall. At the scene completely changing from the open space with a high ceiling seemingly guiding you so far, a sheer white space lit up with fluorescent lights is striking enough to impress you that you are accidentally entering an art gallery in another town.

Jörg OBERGFELL finds materials in cities, architecture and people’s lives blended into daily scenery, and using medium such as sculpture, photography and video, he creates works that humorously involve the relationship between nature and city as well as social aspects hidden in urban life. Picking up materials with his own perspective to confront the world and things outside himself, he presents the subject in a way that he does not directly suggest it. His way of selecting objects and installing an exhibition seems to reflect a light distant feeling.

His work on Koya began with research and taking photographs of sheds around ACAC. While in the shed are daily necessities combined with different things regardless of their uses, and traces of people’s hands remain as if their work were still going on, the shed is functionally organized for an individual as a working building. In his book “La pensée sauvage,” Claude LÉVI-STRAUSS describes Bricolage as a form of working with readily available tools. He compares this approach to mythical thinking in contrast to scientific thinking. The two are closely related at the bottom, however, and are juxtaposed as a mutually supporting relationship.[1] Obergfell’s works, in which gathered materials are changed and put together, seem to overlap with the shed, which is made by collecting existing materials. The artist found “an amazing balance between chaos and order”[2] in the sheds, recorded them by taking photographs, and developed such bricolage to an installation work.

Shed Typology is a large piece of work, consisting of 192 photographs. As the title suggests, a method of typology is adopted, and the viewer, when approaching and looking closely, will notice that the photographs of the sheds are taken from specific angles, and photographs partially capturing the construction are juxtaposed regularly.  While partial photos focus on how a mixture of various materials functions well from the artist’s point of view, they are incorporated into certain typological rules, and bricolage is presented without losing objectivity.

Shown are, for example, how a bundle of rust steel pipes supports the wall efficiently, and graphical compositions created by walls with dripping paint and joints of boards. Photographs with their respective features attract the viewer through a vicarious feeling of the artist’s viewpoint, and make the viewer become aware of shapes and textures of things hidden in daily life. At the same time, as the photographs are so crowded, neighboring photographs captivate the viewer’s attention, and the viewer realizes again that the group of works makes up one piece of work. If one focuses on from the single picture to the bigger outline, the whole work looks like a huge photo or wallpaper. It seems to cause differences in a sense of distance.

Such a sense of distance also appears in Step and Wall in different forms. While they are works showing a part of the sheds, each of them has turned into a function itself for forming a space. The visitor cannot go into the exhibit room without stepping on Step, and Wall also holds its position to play its role obediently. The work hidden in the space, however, rather attracts the viewer because of its incongruity, while maintaining a distance from the viewer as something indistinctive. And when noticing that this strange thing is a part of the sheds found in the area, the viewer begins to perceive that they make up the work and suddenly the distance is reduced with a feeling of familiarity.

The so-called white cube presents itself in contrast to the previous space, and makes traces of hands unintentionally left in daily use emerge in the homogenized space. However, the works such as Step and Wall, which seem to blend into the space by remaining strictly functional, not only depict the features of the object in the inorganic white space, but also keep a balance between the object and the space in the installation so that neither of them stands out. This space was painted white by the artist himself and prepared with care. Rather than a style in which a work is placed, it is more like a canvas made carefully as it affects the work, and it actually became an important foundation for the work.

Translucent corrugated plastic sheets used in the Wall, which are usual materials for building a shed, show through miscellaneous working tools behind them, and it seems to reverse the inside and the outside. Imitating bricolage, as if parts of a shed were brought in as they were, the artist seems to have cut out a part of the white cube and combined it with the elements of the shed together. You can see Obergfell’s style and the method of bricolage overlapping. A gap created in the closed exhibition space is connected to the outside of the gallery.

Obergfell often shows contrasting relationships in combining objects. In Replacement installed in a pond at ACAC, for example, he cut an actual shed in half, and by replacing the upper and lower halves with new materials, he accentuated the way how the joined parts of the original tin-plates and boards looked. While the little shed blends into mid-summer scenery in the woods, it looks awkward in the pond in the middle of the well-balanced construction of ACAC.

Expressions will change through slightly different distances in the relationship between the contrasted objects, whether it is distant or close. In this installation, such relationships came into sight in diversified ways everywhere. They attract the viewer, and make them discover humor lurking inside.

On the back wall of the gallery, a monochrome photograph of the other half of Replacement is displayed. The photograph looks like an old portrait with the mood totally different from inkjet prints of Shed Typology. The oldness that the viewer feels reminds them of a memory or story, and the viewer’s imagination is linked with the place where the picture was taken. The imagination develops further, from “when and where” to an invisible existence “that was actually somewhere / seems to be somewhere.” After the exhibition is over, the shed continues to exist there until its role is fulfilled, but its way of existence is like a legend that is left on people’s mind over time. The viewer’s memory and imagination will become a part of the work as patches like those shown in the shed.

Each work that consists of Koya is put all together in a single space while cutting off and changing the elements of the shed’s bricolage. The distance measured by the artist’s eyes is kept between the viewer and the work, the work and the space, and objects and objects—drawing an imaginary line that lightly extends from the white cube to the pond, and farther.

[2] Quoted from Obergfell’s text written for visitors to the exhibition. 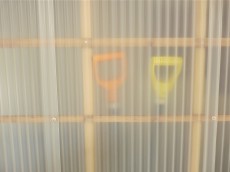 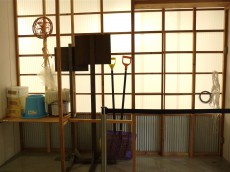