Taking photographs for cyanotype print, one of the old techniques of photography, CHIBA Naoko uses handmade Japanese paper. In cyanotype print, images appear in many shades of blue, and since handmade Japanese paper has a unique uneven surface depending on the length of plant fiber unlike machine-made paper, a photograph printed in cyanotype looks blue and a little blurred, forming a mixture of clear and unclear images. The texture looks like a painting rather than a photograph, as well as scenery of an uncertain past rather than contemporary scenery. Or it looks like a timeless scene in one’s partly blurred memory. The photographed subject, however, is the very scenery that exists here and now.

CHIBA Naoko has been taking pictures since 1997 of a farmhouse on her father’s side, which has a 200-year-old main building and the surrounding area in Towa-cho, Hanamaki City, Iwate Prefecture. This seemingly peaceful place has been protected and cultivated by her distant ancestors who maintained the land and the blood for 400 years. In the Japanese Tohoku (northeastern) Region where the legend of Ezo [1] people’s leader Aterui and Ainu [2] words still remain, cold weather damaged crops and famine hit time after time, activities of people living with nature as well as history of life and death are accumulated, which cannot be simply brushed off by saying ‘weight of time.’ Such land, however, has forgotten layers of the past as the times change, and physical things that have barely conveyed past lives are going to disappear.

Chiba’s Father’s House, which could be considered her lifework, is a series of photographs capturing such land and what has been left there. Trying to find out her identity, she exposed and fixed onto film her relations’ signs in the region including ambiguity of fading memories of people and the society in the historical flow of modernization. And at the root of her works is her interest in recording what keeps going on faintly from the disappearing past to the present, together with the whole atmosphere surrounding them, by the use of ‘photography,’ a means of expression and a recording medium.

It seems a natural consequence that this production, which began with searching for her family’s history, gradually developed to an exploration of the old stratum of land called Tohoku. In the project “To the north of the spirit” in which Chiba has participated since 2014, she carries out research in culture and life of people living in the north, while making residency works in Fukushima with artists from northern cities in Europe. There she found various similarities:―lost religion and lifestyle of expelled people, the reality of depopulating regional cities, and how people of northern regions sharing a common climate interact with nature. Probing into her personal interest in her family and self-identity, she has found that lost cultures and the reality of communities declining with the times come up as universal issues.

Developing such an interest, she started her production with the search for something that continues from the past to the present in Aomori in the same Tohoku Region. While dealing with various folkloric materials, Chiba came on ‘sakiori’ cloth. In the times when any cloth was valuable, old torn fabric, scrap cloth, plant fiber, etc. were woven together with hemp yarn to make cloth. Its origin is known to be in the Tohoku Region which is a cold district, and similar techniques spread from the Kinki to the Tohoku Region with kitamae-bune (a merchant ship that carried goods on the Japan Sea route). The cloth was called saguri in Aomori, and as the fabric was thick and resistant to water, it was popular for work clothing for fishermen in the coastal area. [3] In the southern region of Aomori on the Pacific side, which is culturally close to Iwate where Chiba is from, much cotton thread was not obtainable from kitamae-bune, but after the railroad opened, many kotatsu-gake (a coverlet for a kotatsu) were made using the same technique and colorful cloths. Chiba started her research by dealing with these cloths of Aomori City’s collection.

These materials were for daily use. When they are closely observed, it is noticeable that the shoulder part of the dominant arm is worn thin, or handy materials in daily life at the time were used for lining. Since those traces remain here and there, we can imagine movements and lifestyle of fishermen who wore such clothes and those who used the kotatsu-gake. Chiba took pictures of them using a pinhole camera. Adopting this technique, which consumes exposure time, it seems that she tries to capture even her intense eyeing in order to fix the past appearing and disappearing in the back of what remains there. Moreover, by overlapping pictures of these materials and the scenery of the place where they were collected in multiple exposure using the same pinhole camera, she created images as a work.

Chiba first showed her work using a pinhole camera at Art@Tsuchizawa in 2014. To pay homage to YOROZU Tetsugoro, painter who was from the same hometown Towacho as Chiba, she made a work by photographing a picture that Yorozu took 100 years ago and the scenery of Tsuchizawa at present in multiple exposure using her self-made pinhole camera. The scenes of Towacho observed by the two artists, who have their roots in the same place, were linked beyond 100 years by using multiple exposure of a pinhole camera. And again in this project, she created images so as to link severed time between the past and the present by overlapping the cloths which have traces of the past and the scenery that simply remains there, with neither memory nor succession of materials, as it used to be when the cloths were used.

In each of her works, as their respective titles indicate, the scenery of places overlaps the materials. While some of them can be identified as specific objects, others look vaguely melting in the gradation of light like some ghosts rather than real things. The photographed images actually show tangible and symbolic objects to make up the images, but what Chiba is trying to express here seems not to be just a combination of tangible images. She probably intended to reveal layers developed with mixtures of sorts of energy emerging from each object and place.

When making large-sized Lambda prints from negatives made with a pinhole camera for this exhibition, she was strongly aware of gradations of pale light and subtle flare, which are features of pinhole photography. In the finished works, the difference between rich darkness and disappearing delicate light is carefully captured, and with such subtle layers, Layers of Time has become a work which not only represents overlapped and exposed past and current things but also reveals the presence of more complex layers capturing invisible energy of time bubbling up from the subjects.

There is no doubt that a depopulated area is destined to disappear. It is due to a cruel and irreversible flow of time. Chiba does not give up, however, those which are going away, pick them up with patient care, and tries to keep them persistently.

During the research, Chiba encountered the Nanbu Sakiori Preservation Society. It is a group of people who find out techniques that were almost lost in the 1970s to inherit them. But for these people’s wills, continuous activities and their pride and joy in them, these techniques that are currently drawing attention as local specialty would not have been inherited. The cloths made at present have the background different from those days when poor people made them out of necessity. Even if the form and purpose changed, however, the cloths are being made based on the same joy of making them. Feeling empathy for this, Chiba made a video work Sakiori, The Many lives of Fabric. It shows people who pass on the disappearing past to future generations while changing purposes and trifles to suit the present and yet carrying on a kind of spirituality. There, you can see in their awareness a commonality underlying Chiba’s fundamental desire in her production.

Born in Iwate and living in Yamagata, Chiba keeps her eyes fixed on the land of Tohoku, and tries to capture lights emitted from the last existing traces of disappearing things. This attempt emanated from her personal matter of concern is now gazing into change and decline in human culture.

[1] Ezo, also called Emishi, are people who lived north of the Kanto Region from the ancient times, and were insubordinate resisting the rule of Yamato imperial court.

[2] Ainu are indigenous people who lived in a wide area ranging from the northern Tohoku region to Sakhalin and the Kuril islands. 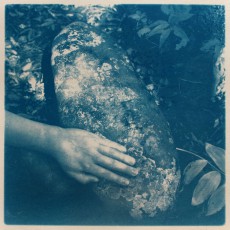 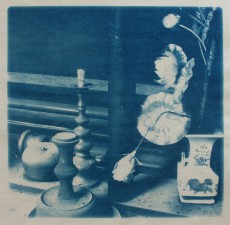 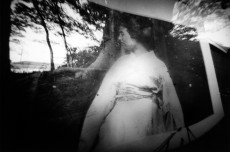 "Mrs. Yorozu, in 1915, at Tsuchizawa"
(from the series of The beginning of a new primitive era -- A Homage to Yorozu Tetsugoro--),
pinhole photographs,
inkjet print, 2014. 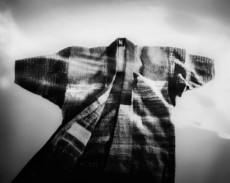 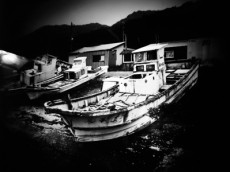 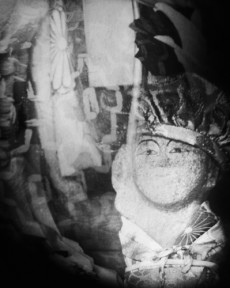 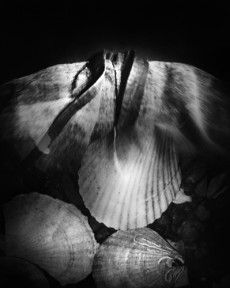 "Scallops and a fisherman
in Sotogahama town"
Lambda print