Listening to the self through artificial landscape: The field recordings of KAMIMURA Yoichi

KAMIMURA Yoichi often uses field recordings in his works, such as in SOMEWHERE, which combines a painting of the Aomori landscape with sounds of the place where it was drawn, and perfect circle, which uses the sound of waves in the new and full moon in a room where the light constantly changes. In recent years, this method of recording natural sounds outdoors has been at the center of his production. Kamimura, who trained as a painter, also made music alongside his studies and has always incorporated the relationship of sound and vision and the recording of sound as themes in his work. In earlier artworks, Kamimura experimented with sound recordings in various modes and forms. Some examples include his Conductor of Scenery series (2010), which uses video as a musical score; his twilight message series (2010), which is an example of onomatopoeia, language’s mimicry of sound, molded into art; and night passage (2011), in which Kamimura constructs composer Erik SATIE’s pieces and accompanying sheet music as an installation. Field recordings have become the core of Kamimura’s work since night boat (2012), which documents a boat drifting in the ocean at night. For example, grandmother, prologue (2015) combines the soundscape of his daily life with a fictional account based on his grandmother’s memories of living in Manchuria. For 0°C (2016), together with artist UMEZAWA Hideki, he collected sound recordings of ice from artists all over the world.

According to sound art theorist Caleb KELLY, since the turn of the century, there has been a trend in sound art to combine field recordings with video and installation.[1] Kelly points out sound artist Stephen VITIELLO as a leader in the genre, best known for his World Trade Center Recordings, which he made in 1999 as a resident artist living on the 91st floor. Vitiello captured the vibrations of the building itself using contact microphones and then converted them into sound. Recording at such height far above the ground made the microphones more susceptible to the effects of weather and nearby aircraft. His 2007 recording Listening to Donald Judd took a similar approach, this time using as a sound source Judd’s outdoor sculptures in Marfa, Texas.

Listening to Donald Judd and Kamimura's SOMEWHERE are thematically similar as field recordings in that they both make use of existing artworks, but the sounds of the two pieces are totally different. Vitiello’s is mainly abstract noise, like a quiet moan converted from vibrations of minimal objects minimal stereoscopic vibrations caused by an environment. What we heard in SOMEWHERE are concrete sounds that evoke imagery of the recorded landscape—the chirp of birds and cicadas, the hiss and gurgle of sulfur gas, and the sound of a cable broadcast, among others. They could be thought of as background music or the soundtrack to the landscape paintings.

Kamimura's artwork, however, seemed to focus on the contrast between painting and recording rather than the ambiguous connection between the two. Speakers for background music are usually placed inconspicuously, out of sight, but the speakers and cables of SOMEWHERE are strewn across the floor in plain view, insisting on the existence of a different order from the visual world. The landscape paintings each show separate worlds within their frames, but sound blends together within the space. As the audience experiences the space, they combine the individual landscapes with sounds from completely different places. These visual and aural differences bring to mind all of the contrasting relationships that comprise SOMEWHERE. Recordings made by hand and recordings made by machine. Past and present. The experience of the landscape painter and the experience of Kamimura himself. What connects these contrasting elements are concepts of location and landscape, of records and memories. However, might SOMEWHERE express recording and location as essentially fragmented entities? If the eyes and ears (not to mention the nose, tongue, and skin) render their own distinct shapes of memory, then it may be nothing more than coincidence that we experience personal memory as the convergence of these sensory memories. In grandmother, prologue, too, Kamimura superimposes the contrast of sound and vision with the contrast of other people’s experiences.

SOMEWHERE causes me to ponder the formation of experience. In this sense, I feel it shares commonalities with sound art in 1970s Japan, when artists used sound recordings in an attempt to observe the mechanisms of the senses. HIKOSAKA Naoki, known for his Floor Event (1970), played a recording of the sea atop a roof with SHIBATA Masako in SEA FOR ROOF (1972). WADA Morihiro played different messages from multiple sound recorders in his 1973 work An Introduction to Methods in Cognition No.1 Self Musical, all the while standing in a T-shirt inscribed with the words THIS IS ME (“Kore-ha-watashi-dearu” in Japanese). While their methods may differ, artists used recordings to take a critical look at their lives, which had become inseparable from technological developments after the time of the Expo ‘70 in Osaka. Similarly, TAKAHASHI Mizuki discusses the impact of the 2011 East Japan Earthquake and Tsunami on Kamimura’s night passage, after which Kamimura more broadly adopts field recordings in his work.[2]

The roaring sounds of perfect circle strike a different chord, feeling distinct from Kamimura’s previous works. When considered as a midnight seaside spectacle, the viewer may feel a direct connection with the disaster. However, he does not intend to merely construct an illusion. The piece’s main message becomes clear with a full understanding of SOMEWHERE and the artist’s explanation of his work. Sounds of the waves mix with the noise of dragging the microphone, which hints at an artificial environment. Kamimura explains that the work relates the natural, biological, and human transformations that occur with the waxing and waning of the moon. These factors shift the audience’s perception to the transformation of the senses within an artificial environment. According to Kamimura, the recordings is processed so the audience can experience both the natural and artificial feelings from them.

How many people can immediately distinguish the sounds of tides of the new moon from those of a full moon? perfect circle is a petition for the audience to reflect on their own senses, as if urging them to try and recognize the discrepancies. This reflection then connects back to questions about whether we can feel the power that sound and light have over the behavior of living things and the impact they have on our biorhythms. His attempt to sync ourselves with nature’s rhythm through recordings is reminiscent of Walter DE MARIA’s Ocean Music (1968). These questions transcend individual experience and may lead to the exchange of experiences with others. perfect circle can also be compared to Olafur ELIASSON's Weather Project (2003) in that it leads to a dialogue using artificial nature.

R. Murray SCHAFER, a proponent of soundscape theory, states that the wide, layered band of textures in recordings of a seascape stirs the imagination with every listen.[3] In 1969, Irv TEIBEL, a staff member of Tony CONRAD’s film production team, presented an artificial recreation of ocean recordings in Environments 1 after noting the psychological effects of ocean recordings. The genealogy of ocean recordings extends back from Kamimura’s work to Hikosaka and Shibata, and even further, across the ocean, to Teibel and De Maria and earlier. 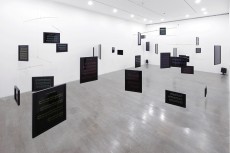 WADA MORIHIRO
"An Introdaction to Methods in Cognition
NO.1 Self Musical"1973
Photo:unknown 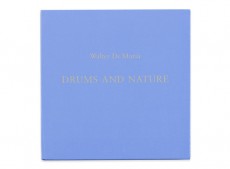 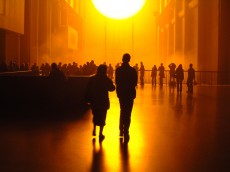