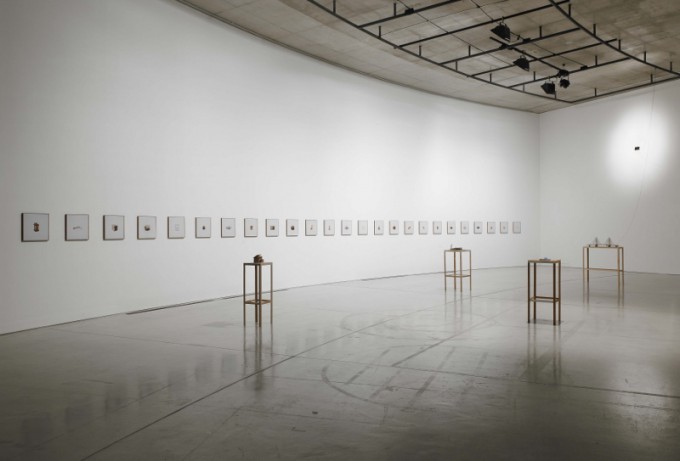 THINGS FROM ANOTHER TIME, THIS PLACE AND A RELAED PERSON. photo: YAMAMOTO Tadasu

Small distortions to escape from the mainstream

Using constructions that symbolize city politics and/or discarded articles reflective of city life, Jorg OBERGFELL exposes a kind of social structure in his work. At the same time, wrapping them up in “cuteness” related to humor, cynicism, secrecy and trifles, he makes his work, in its overall image, gently involve criticism that faces the power controlling society. His style of intentionally expressing such modesty is also seen in his approach to deal with space in his work. For instance, a flag hoisted to represent possession, occupation and conquest is made of a garbage bag and a thin wooden stick (fig.1). In another work, a lone tree standing in a wilderness, which is viewed as reflecting Friedrich’s absolute solitude, is placed on a DIY plywood pedestal and constructed out of papers (fig.2). Here, again, the exaggerated meaning and content of the original such as conquest and sublimity are shown cynically inverted on a totally different scale by using useless things in the city as materials.

At first sight, “From Scratch” (2013) included in this exhibition looks just like an image of filmed skyscraper. The camerawork, which makes us think that the picture might be taken from a helicopter up in the sky, and grand-sounding music are usual tactics for the media to film high-rise buildings (fig.3). Actually, however, the artist’s subject is a small model made of reeds growing nearby, placed all by itself in a vacant lot where the plan of constructing a cluster of high-rises has come to an impasse. When the model that gave an impression of a grand scale suddenly shrinks to such a small-scaled object, a viewer feels a dry sense of humor and cynical despondency as well.

In Obergfell’s work, quotes and inversion of original meanings are often handled through conversion and replacement of the size and materials. While he changes the size and materials, he creates the object with amazingly exquisite workmanship maintaining the affinity and similarity with theoriginal. When he thus presents the object for contrast in a certain context, he deals explicitly with the contrast, but at the same time, he deliberately uses all elements other than contrast in order to ease differences so as not to give a provocative impression. In addition, incorporating trivia on purpose, he seems to try to avoid giving an overwhelmingly assertive image to his work. Repetition with a difference in its ironic ‘trans-contextualization’ and inversion(1) keeps a critical distance to the predominant original as a parody with a humorous twist and difference.

To produce his work entitled “Things from another time, this place and a related person” for the artist-in-residence program here, the artist borrowed ideas from countless small pieces made by his grandfather. Based on the project theme “exchange,”(2) Obergfell produced three-dimensional works following the technique that his grandfather used and exhibited them together with photographs of his grandfather’s pieces. His grandfather, so-called Sunday carpenter, used to shut himself up in his small workplace to make lots of small articles, useful or not, including wall ornaments, piggy banks and doorstops. The motifs such as house, garage and windmill represent familiar items in his daily life. (His grandfather stayed in Europe throughout his life, though he often enjoyed travelling.) Following his grandfather, Obergfell produced three-dimensional works based on things, which he came across in Aomori, the site of the residency program. Here is literally the first-level “exchange” in terms of time between two generations, grandfather and grandson, and also in terms of space between Japan and Germany with objects having different regional features showcased respectively. You might note, however, that those objects placed side by side are not indicative of such substantial disparity as to evoke exoticism. Here is an example. A traditional house in Schwarzwald, the artist’s hometown (fig.4), and a house in Aomori which has a long gabled roof only on one side reflect the distinguishing features of the district respectively, but it is hard to call those modern houses vernacular architecture. The bridge (Aomori Bay Bridge) and buildings of ACAC often represent this area, but they are built uniformly to some extent due to globalization. They are nothing more than constructions promoted as a new symbol of a modern small city where vernacular traditions are no longer observed. Probably there are dead raccoon dogs (tanuki) in Germany, too (fig.5). Thus viewing “vernacular objects” (3) chosen by Obergfell, similarities draw more attention than differences in some cases owing to a contemporary quality, though they are often seen in specific areas. For some three-dimensional pieces on which he worked hard to imitate the original, the roof is decorated with collected pine needles as his grandfather did and the coloring is made rough. As the artist correctly copied the old pieces in detail and structured precisely and exquisitely on a strictly reduced scale, his works look like architectural models, and differences are clear enough so as not to make them look identical with his grandfather’s small pieces. The same is true of his way of choosing motifs. For example, he got the idea of his bridge (fig.6) from his grandfather’s windmill (fig.7) driven by a solar battery, but his bridge is powered by artificial light applied to the solar panel. It means, different from his grandfather who used the solar battery only to rotate the wheel, Obergfell shows a cynical inversion through an ironical conversion of energies. This process he has chosen separates his objects, which are to be interpreted in terms of art history, from his grandfather’s. Therefore, his three-dimensional works in which the production method has been carefully copied look as though his grandfather made them at a glance, but it is clear that well-trained hands and eyes lie between the two. Comparing them, we realize that his grandfather’s small pieces are certainly technical, but they give superficial impressions caused by such bricolage technique (the artist follows the same process), and we also notice a casual way of selection and display as in one’s hobby of making things and a frank attitude toward creation. From another viewpoint, these simple small pieces are charming like art brut showing a vivid and free imagination.

With the two kinds of works placed side by side in the context of art, we think of binary opposition: works created by artists and art-lovers’ secondary pieces made by copying artists’ originality and methods. Obergfell’s works, however, are made by copying his grandfather’s pieces with his privileged hands and eyes, and that gives those works a fake impression. The “exchange” between him and his grandfather does not simply indicate the exchange between generations but also an amateur artist’s attitude is shown in contrast to that of a professional artist, and values of their works are exchanged at the site of an art museum in the context of these works.

The exchange of value is not necessarily expressed in the contextual-based picture of binary opposition, art vs. non-art. This work, which incorporates a biographic element tracing his grandfather’s production process, reveals the value of creativity as he respectfully repeats the meaning of the original rather than cynically inverts it. What lies between the two is not a cynical gap, but creativity succeeded earnestly. Small differences seeping through them seem to be confronting equally with each other as irreducible values.

(1) Linda HUTCHEON, “A Theory of Parody: The Teachings of Twentieth-Century Art Forms,”(New York: Methuen, 1985).
(2) Interview with Jorg OBERGFELL on December 10, 2013 at ACAC.
(3) From Obergfell’s text for the exhibition catalogue. 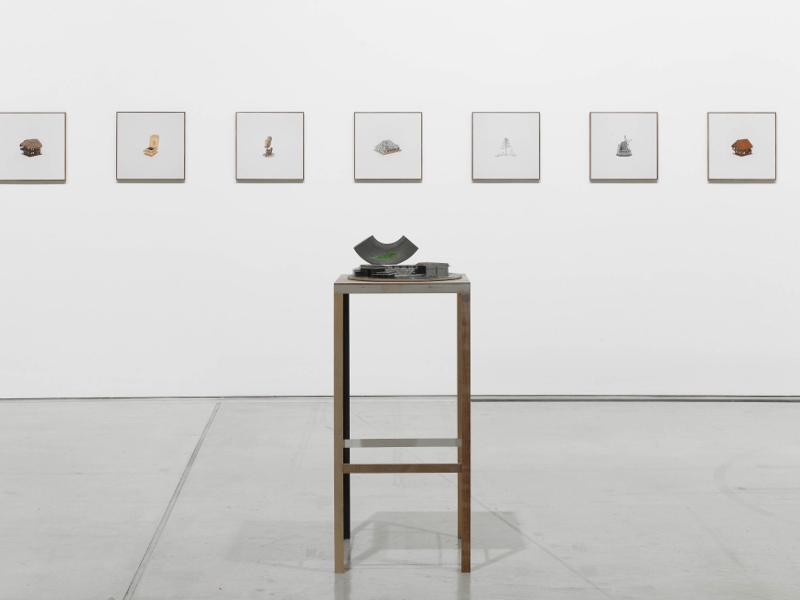 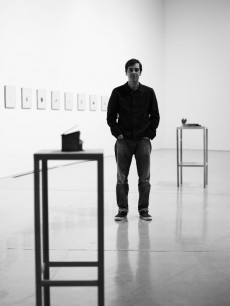 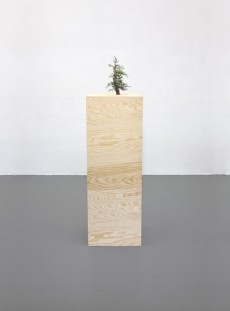 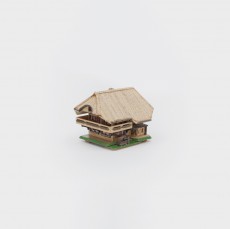 fig.4 black forest house with roof made of grass wall paper (from my parents'living room), photo, 2013. 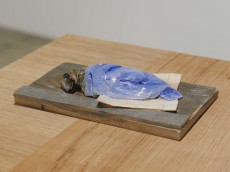 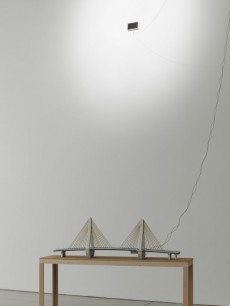 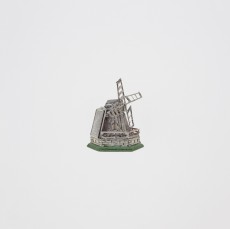 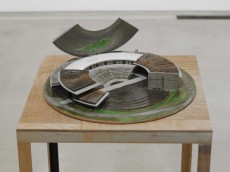 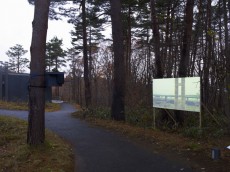