TSUKAMOTO Etsuo works under the assumption that sculpture is an artificial recreation of natural phenomena, the act of imbuing natural objects with a human touch. Based in Hirosaki, Tsukamoto produces artworks that reflect his view of sculpture while decoding the past and present of Aomori Prefecture, which is itself a natural environment that holds many examples of human meddling. The feudal warriors of the Tsugaru clan historically bred their own variety of pet goldfish, known as the Tsugaru-nishiki, and the region’s crops have long been produced by way of human agriculture. In this year’s 17th annual Vision of Aomori exhibition, which features artists with a connection to Aomori, Tsukamoto interprets the place where artistic creation occurs as a “farm” of sorts, in which lies the perspective of a sculptor who sees the big picture behind the innately human and artistic desire for intervention into nature.

1962 Born in Kumamoto
1989 Completed Graduate School of Fine Arts in major in sculpture, Tokyo University of the Arts

Supported by
THE ASAHI SHINBUN FOUNDATION 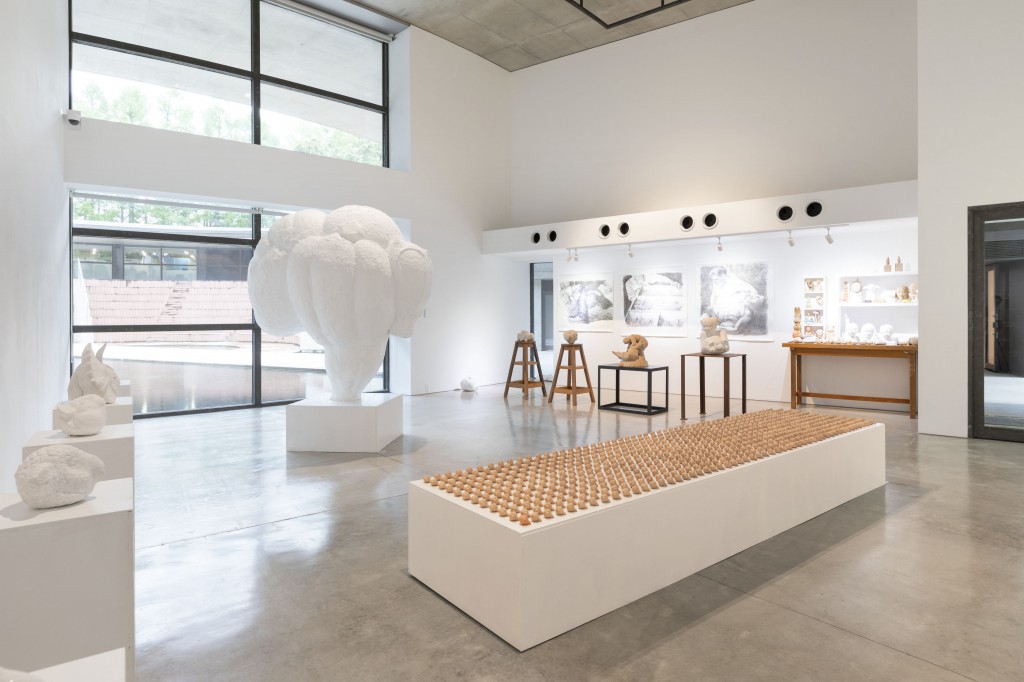 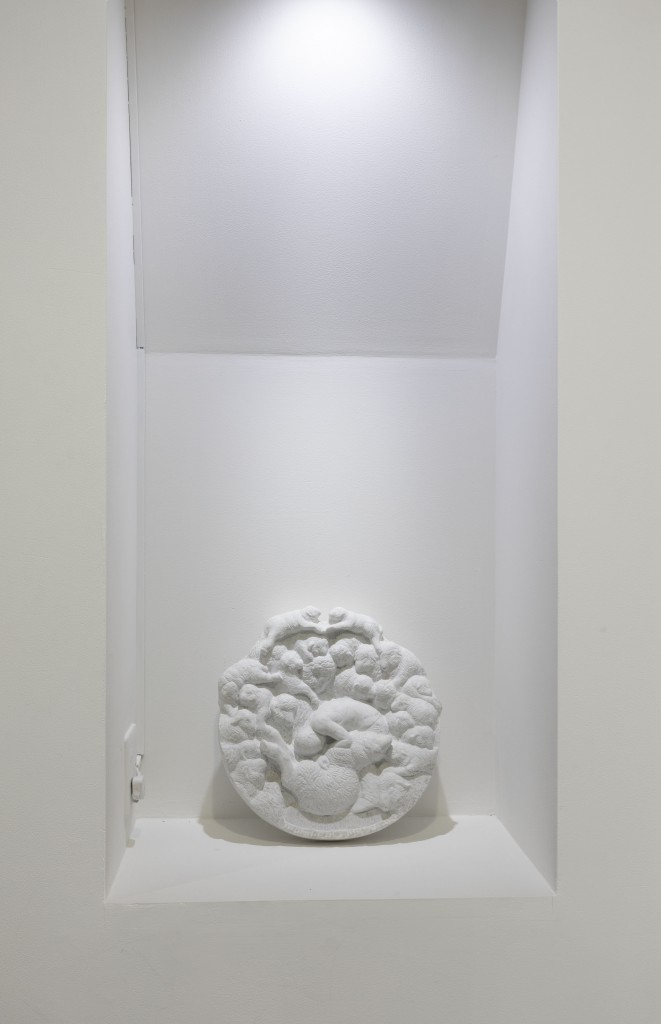 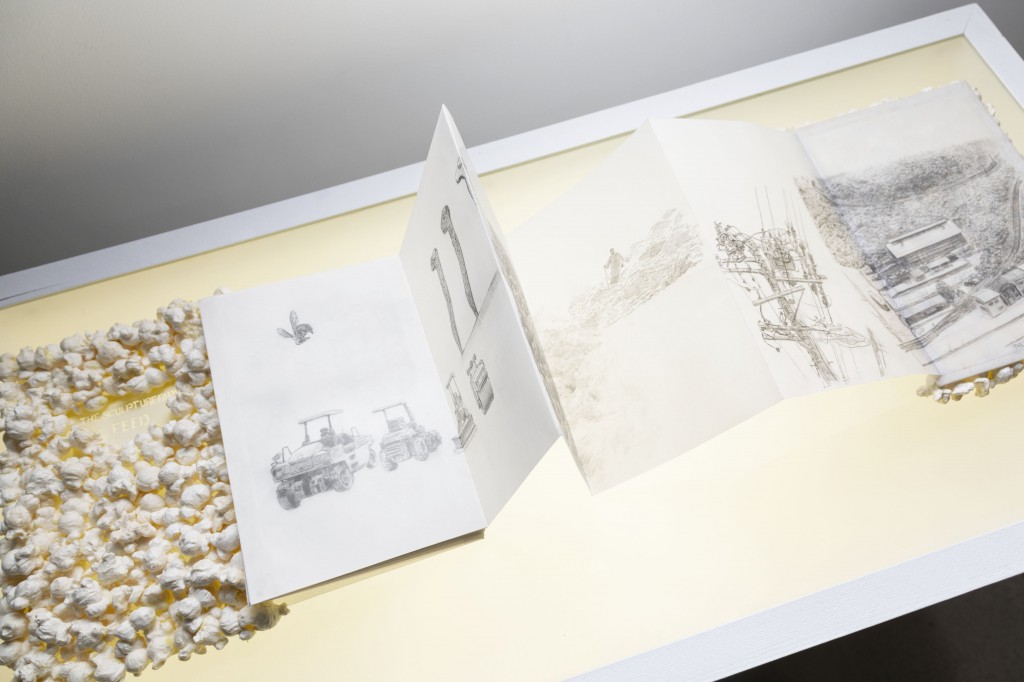 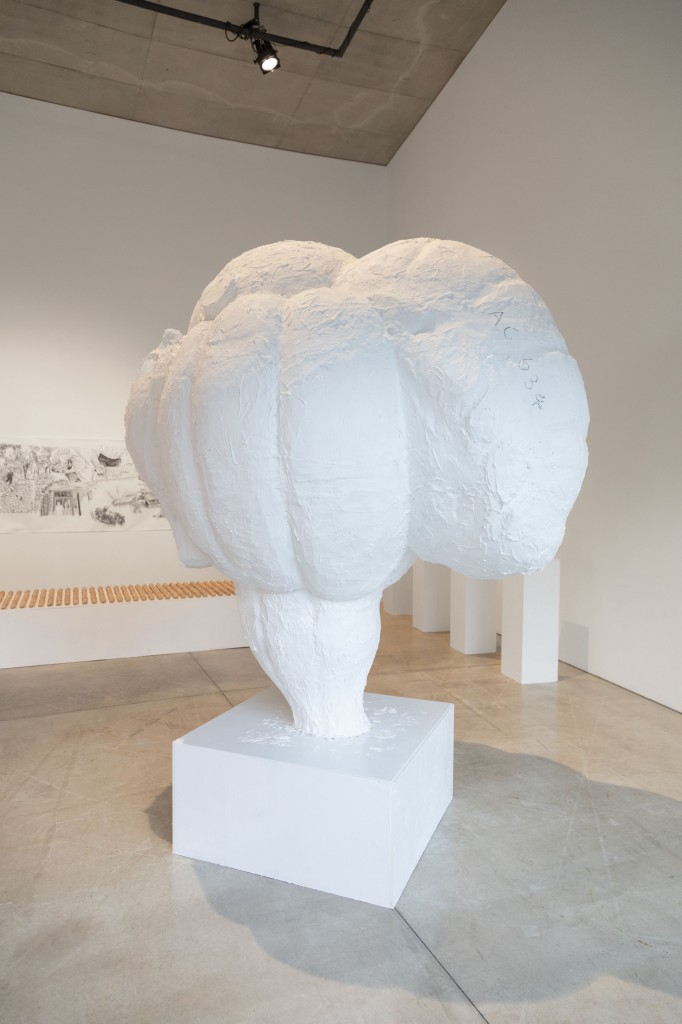 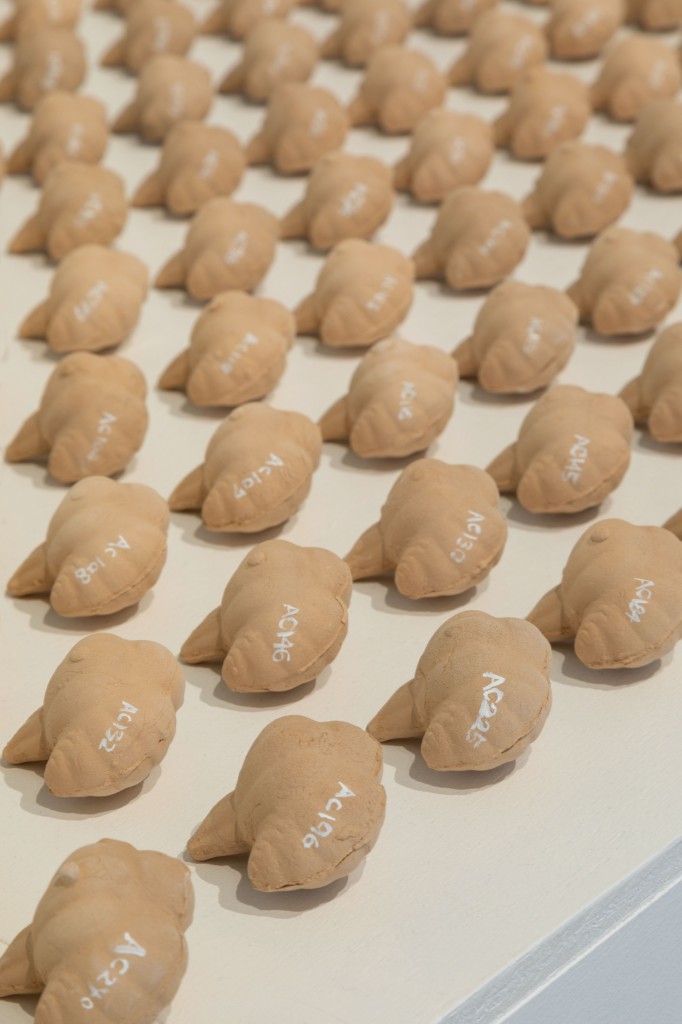 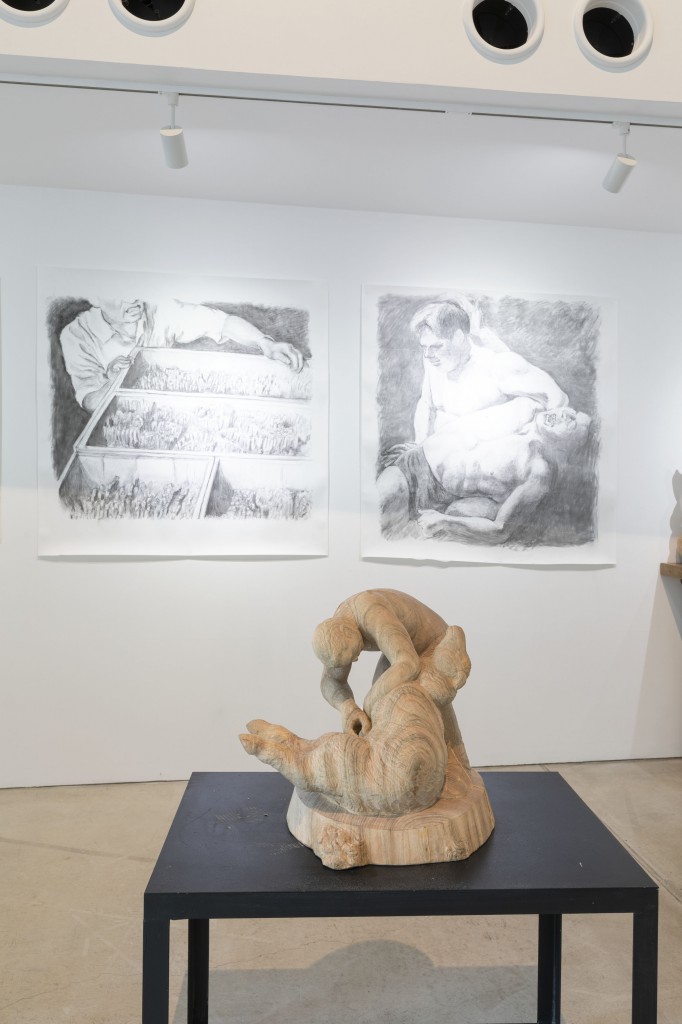 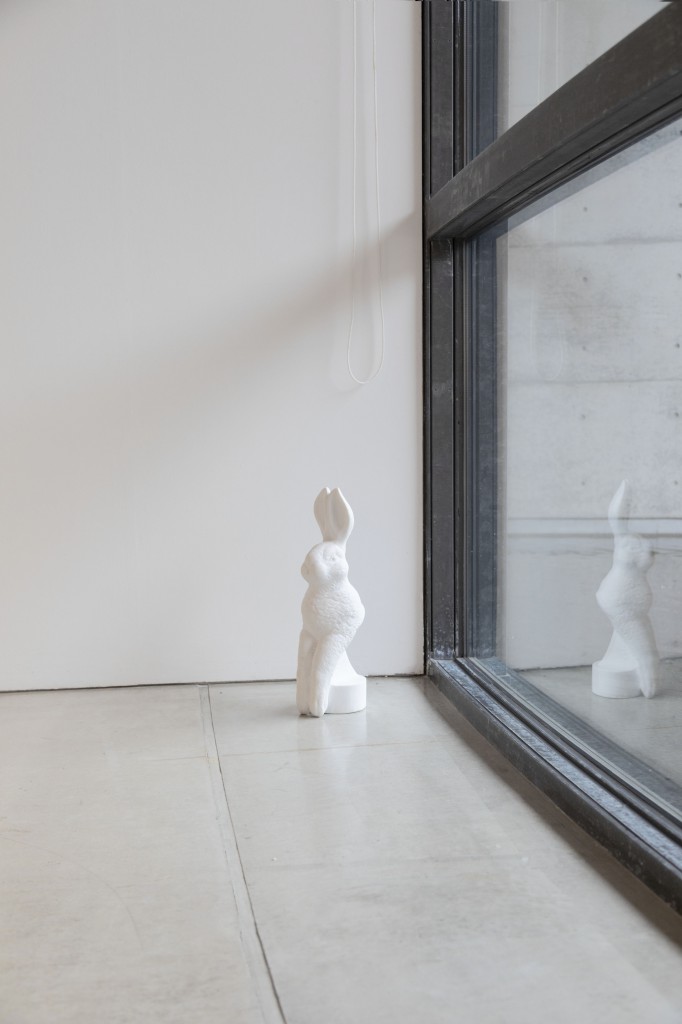 Participants in the Laboratory

TSUKAMOTO Etsuo assumes that sculpture is the recreation of natural phenomena through the processing of natural materials such as stone and wood. He considers farms to be the places where crops are born, not naturally, but through human intervention, by means of crop breeding and the use of agricultural chemicals. Out of these ideas came the title of this exhibition—Sculpture Farm.

The sculpture Hornfaced Bee AC634, based on the eponymous insect that is used to pollinate apple orchards, is displayed at the center of the gallery. In this piece, the bee’s wings have been removed, its legs simplified, and its rough surface made by applying plaster directly onto styrofoam. Its large two-meter-long body dominates the gallery. In front of it, the 633 terracotta pieces of Hornfaced Bee AC1-633 are arranged in a row on a flat table. They were made by further abstracting and shaping Hornfaced Bee AC634 in molds to resemble industrial products, yet they also call to mind excavated relics, their baked-soil exteriors individually numbered in white letters. On the wall behind Hornfaced Bee AC1-633 hangs a drawing that summarizes the annual cycle of an apple orchard. Triptych drawing THE SCULPTURE FARM-FEED #4 hangs one wall over, next to which sculptures both large and small adorn one of Tsukamoto’s own desks in a recreation of the interior of his studio. On either side of Hornfaced Bee AC1-633 sit a number of stone carvings—hornfaced bees, jumping spiders, sheep, chickens, hamsters, rabbits, and human figures. Listing them off in this way, I am once again surprised that Tsukamoto was able to exhibit so many pieces within the limited space of this 90-square-meter gallery.

In each of these immense multi-piece works, Tsukamoto references the history of sculpture. The triptych form of THE SCULPTURE FARM-FEED #4 can be traced back to Christian art, and the composition of his drawings of human bodies references the statue of Laocoön and His Sons. Hornfaced Bees AC1-633 can be thought of as an artist’s multiple. And although Tsukamoto has jokingly said that the number 634 in Hornfaced Bee AC634 was taken from the height of Tokyo Sky Tree, whose design was supervised by fellow sculptor Kiichi Sumikawa. As another example, Haircutter (Wood carving) was created using the pointing method, a Roman technique for replicating sculpture that was imported to Meiji-era Japan in the late 1800s. The vast number of pieces Tsukamoto has created while tracing the history of sculpture has recast the gallery as a farm, a laboratory for examining the past and setting one’s sights on the future.

Two pieces at the entrance of the gallery guide the viewer to Tsukamoto’s ephemeral laboratory. The stone carving Welcome to THE SCULPTURE FARM, placed in the gallery’s entryway, depicts a single man among a large number of sheep. Tsukamoto says that the birth of Dolly, the first sheep to be cloned from an adult cell, is what led him to create sheep and to consider the relationship between humans and nature.[1] Sheep appear many times throughout the gallery, representing the ultimate form of human intervention in nature—using genetic manipulation to create creatures that would have otherwise never been born. The next item the audience sees is THE SCULPTURE FARM-FEED, a collection of ideas and sketches, the book’s cover decorated with popcorn sculptures. Maize has been a staple food for humans since ancient times. Today’s genetically modified variants, having been bred for thousands of years as food for people and livestock alike, are proof that maize has evolved together with humanity. These two pieces, both created about ten years ago, mark the starting point of Tsukamoto’s use of the relationship between humans and nature as a motif in his sculptures.

Staring at Tsukamoto’s sculptures, especially his stone carvings, the audience may not be able to tell whether they are mere stones or works of art. But the marks of sculpture are certainly apparent—the subtle surface irregularities and the movement of mass that emerges with each muscular stroke—in the fine coats of the sheep and chickens, the smooth skin of a girl’s cheek, or the rough comb of a chicken. The lines of Tsukamoto’s finely sculpted shapes start to look like they are naturally occurring contours within the rocks themselves. To follow the delicate expressions that shift with each change in angle is to experience the movement of Tsukamoto’s hands as they sculpt. The audience can feel his joy in extracting shapes from stone. The presence of the stone’s mass is accentuated precisely because of its sculpted nature, somewhere between a human-carved sculpture and its natural state. This experience of seeing for oneself a natural object transformed into something artificial allows one to see the connection between humans and nature, an inseparable bond that has formed over thousands of years.

Genetically engineering sheep, selectively breeding maize, sweetening apples by way of the hornfaced bee—all done in the name of human consumption. What is natural and what is artificial? Over the tens of thousands of years since stones were broken to make the first human tools, humankind has never ceased developing new technologies. Beyond the pursuit of convenience, they must have felt the joy of creation, the joy of knowing the previously unknown, the joy of being able to do what could not be done before. The insects and animals of Sculpture Farm do not loudly condemn the ego of humanity. Rather they stand calmly as unwitting participants, witnessing the future of humankind as it finds hope and joy in the technology it develops.