Saturday, October 27th to Sunday, December 9th. 10am till 6pm. Open throughout the exhibition, Admission free

The Subtle Motions within Time and Space

The space that a camera can capture on video is limited by its capabilities and the lenses that are used. While you can guess the movements your subject might make within that space, once you frame your shot, all that is left to do is to hit record. At the ACAC, Jolene MOK trusted events to unfold as she peered through her viewfinder. She kept her distance and waited for something with a story to tell within the occasional chance encounter, a change in the natural environment, or any slight movement that might catch her eye. It was as if she was seeing the world for the first time through that tiny viewfinder, transported outside herself to gain an objective point of view.
For Mok, who grew up in Hong Kong, the nature of Aomori was awe-inspiring and full of new discoveries, which led her to take her camera on daily explorations of the forest that surrounds the ACAC. In the first half of her exhibition, Mok presents an installation of several videos that capture the forest in a number of forms.
Woods, Forest, Wood is a slow-paced video work in which the landscapes flow horizontally across the screen. Comprised of 360-degree shots taken in three different locations, the work and its title are a metaphoric deconstruction of the three trees (木) that make up the Chinese character for forest (森). The videos play on a never-ending loop, creating a seamless landscape where the viewer begins to lose their sense of time. Mok says that the wooden frames she placed around the video monitors (fig.1) were meant to put focus on the video itself and create a viewing experience free of the bezels that surround the televisions and computer screens we see everyday.(*1) Less traditional frames than intentional masses of plywood, their material presence seemed to collide with the images on screen. The frames had a certain depth to them, giving the work a window-like appearance. Contrary to its bulky appearance, one of the three screens floated effortlessly near the top of the gallery wall and was also visible from the stairs of the outdoor stage. Here Mok incorporated elements of the gallery's unique architecture in an attempt to show the physicality of video.
In Let Us Now Praise Forest and memento mori, Mok spliced together her digital video imagery and cut actual film from her photographs into vertical strips, illustrating the differences between film and digital expression as one point of view. Almost daily, she would shoot the same spot of the forest at different times of day in both digital and film, which she would cut into strips and and rearrange. Mok then ordered and edited her footage, weaving multiple landscapes into a singular abstract image. She removes the flow of time by mixing fragments in an attempt to focus on the visual changes that occur in a single place day by day.

Because digital video allows for recording and playback of movement, the passing of time is still clearly visible even within the thin strips Mok has cut. In her work you can see leaves swaying in the wind and rain as well as the transformation of color and light in the forest. On the other hand, the film-based memento mori is photographic, one moment of recorded time, a singular existence that cannot by reproduced or resized like a digital image. Due to the small surface area, the film was backlit and frames were installed around each piece for visitors to look into. While a photograph is captured on film as one moment in the flow of time, the film itself, as a physical object, cannot escape that flow, which will take its toll just as it does on all living creatures. The title memento mori, which is taken from the eponymous Latin phrase, calls us to remember that we will all die one day. It feels like a message that the thought of death simultaneously demands that we live in the present time. For Mok, expressing nature meant capturing it in all of its minute and subtle motions. Her artwork manifested itself as an experiment in comparing and transforming her digital and film practices by way of a treescape, which was a primary subject of her photo and video work during the residency.
Mok has traveled the world to film people and nature through her camera’s lens. She has stayed in Japan twice before to produce video works that capture the residents of downtown shopping districts and rural mountainous areas. In Stage Setting, one of her resident productions at the ACAC, Mok filmed the workshops of local Aomori artists and artisans.
She visited the factory of an indigo dyer, which transforms each day as the dyer tends to her vats of fermenting dye. Bright colors cover the workroom floor of a nebuta-shi, the professional craftsmen behind the handcrafted floats of Aomori’s annual Nebuta festival. The calm atmosphere of a lacquer workshop reveals countless processes of grinding and polishing, honed over time. A painter surrounds herself with brushes, art supplies, and books, all of which hint at the rich worldview and intellect that she instills in each canvas. The tools and equipment come alive within each space over the course of an immeasurable amount of time. One visit is not enough to fully observe the joys and sorrows of an artist or craftsman’s creative process, nor is it enough to understand the entire history of a workshop passed down through generations. Even so, Mok makes it a point to listen carefully to each person’s story and find the individual’s presence within the details of their workspaces in the short moments available before shooting. The video ends with a scene of an empty workplace where just moments before someone had been hard at work, as if to express that even in their absence, the presence of the owner has become one with the space over time.
Mok knew that changes would appear in the slight movements of her subjects’ hands and their tools. Even amid daily repetition, the human hand can never produce the same thing twice. Through her lens, she captures creation, including preparation and cleanup—moment and movement as one—a witness to the life within the refined routines of traditional artisans and artists.
Stage Setting is punctuated with a narration of sayings on art and life by famous artists, which Mok poses as questions. It could have been that for Mok, a creator in her own right, this artwork was a projection of her own image as she captured her subjects on camera. Mok did not add this narration to espouse the profound wisdom of artists who came before her but as a way to better understand herself, the answers occurring to her naturally as she watched her subjects. The spaces that exist in Stage Setting represent the space where work happens, the spatial and temporal motions of creation, and the space that exists between the subject and Mok herself.

Fig. 1: In pursuit of a siesta, video installation, 2017.
*1  Interview with the artist during residence program in October, 2018. 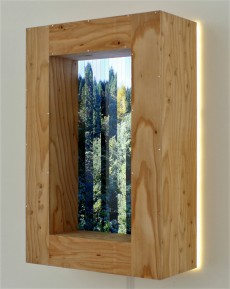 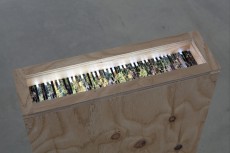 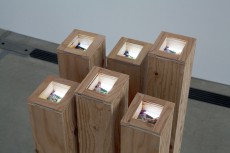 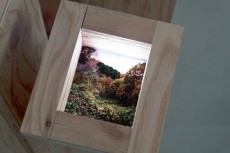