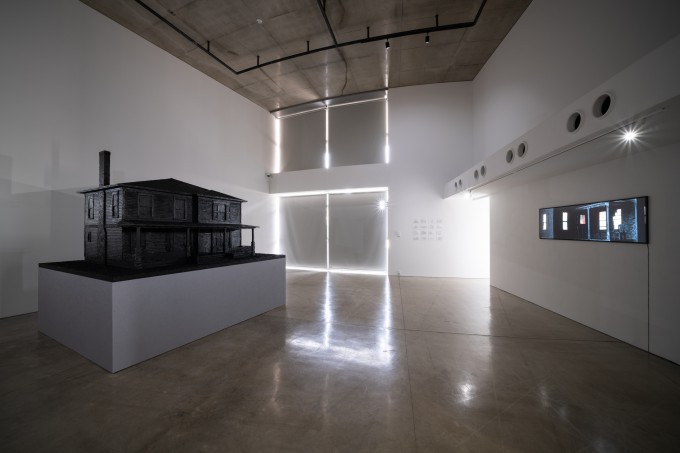 Looking at SUZUKI Motomasa’s Living Dead (ACAC edition), the viewer experiences a feeling of moving in and out of reality. Unlike the many movies, television shows, video games, and other visual entertainment that merely draws your attention into a fictitious world, Living Dead (ACAC edition) fully engages the imagination while, at the same time, leaves the viewer mindful of their physical body.
Confronting the artwork, we see a grassy front lawn with stairs that lead to the front door of a wooden house with a chimney. The imagination swells with images of a family gathered inside around the fireplace. The artwork’s delicate modeling ignites the imagination and elicits memories of home, drawing us in as we imagine what the house is made of and what its surroundings must be like. Just as our imagination starts to take over, we are pulled back by the reality that exists in the artist's handiwork, his presence clearly sensed on the surface of his sculpture. No sooner does our immersion into the world of imagination begin than does the physical presence of the sculpture—it’s mass, texture, and smell—stop us from absorbing ourselves fully. When looking at the lawn, the imaginary smell of the grass competes with the actual smell of the clay. Peering through a window into the house, we see a black surface with clear vestiges of the artist's spatula, which tells us once more that this is, in fact, a sculpture. Living Dead (ACAC edition) confronts us with the fact that we exist within a body, and that even if our consciousness can immerse itself in a fictitious world, our physical body cannot.
Suzuki makes sculptural works based on personally significant scenes from movies and video games and images found on the Internet. He calls his productions “works of verification”—meaning he will take imagery that he finds attractive from those fictional worlds and then verify that it can exist as a three-dimensional object. Living Dead (ACAC edition) is related to Suzuki's Ghost series of lightboxes that follows the technique of a previous wooden model series in which Suzuki uses his imagination to fill in shapes that aren't visible in the original image. Suzuki first creates a relief with black oil-based clay, which he then photographs and frames in a lightbox. Suzuki’s lightboxes remove the model’s physicality, visualizing its shape and tactile form in order to solve the issues of storage and transportation that are inherent in sculpture. Suzuki has also explained that the reliefs are merely intended as subjects for his photographs and have no life of their own as sculptures. (*1) The clay model is only crafted in the name of the final two-dimensional production, and after being photographed, it is disassembled and returned to clay. His models are mere ghosts, never having been given life as sculpture, as they are born of imagery and return to imagery in the shape of a photograph.
With Living Dead (ACAC edition), however, Suzuki deviates from this cycle. Here, the clay model can be seen from all sides, and since the viewer’s vantage point is not fixed, Suzuki forwent the colored clay used in the windows of previous works to instead create a stark black sculpture. Lit from the side, the model is rid of the shadows and textures usually seen in sculpture. This serves to emphasize that the model exists in a flat, fictional world, yet the textures that glimmer in gaps in the light tell of its sculptural presence. A relief is by definition attached to the world in which it is created, its existence as a sculpture devoid of independence, but Suzuki gives new life to Living Dead (ACAC edition), which stands independent of its original context.(*2) The unnatural lighting serves to obscure the viewer’s vision, seemingly preventing them from viewing it as a normal sculpture.
Living Dead (ACAC edition) warns us that is utterly indifferent to scrutiny, while at the same time, it may be our own laziness that allows us to heed such a warning in the first place. Suzuki says that for him, this “work of verification” is a necessary process that allows him to give physical shape to objects from film and the internet in order to perceive and understand them. (*3) Certainly, as we are now surrounded by screens and constantly bombarded with information, we are wont to believe the images we see without really knowing if what we are seeing can actually exist. Ironically, it is a sculpture derived from a picture on a screen that alerts me to this laziness.
Living Dead (ACAC edition) will not allow us to immerse ourselves in it. As imagination and memory subside and the viewer is drawn back to their physical location in front of the sculpture, they are made aware of their senses and are left to accept the fact that their body certainly exists on the side of reality, not of fiction. I am reminded that sculpture drives the wedge needed to reclaim our physical bodies as we move in and out of reality. 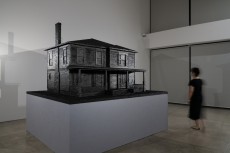 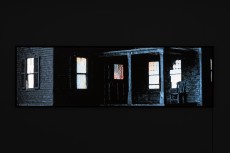 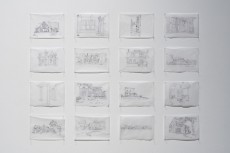