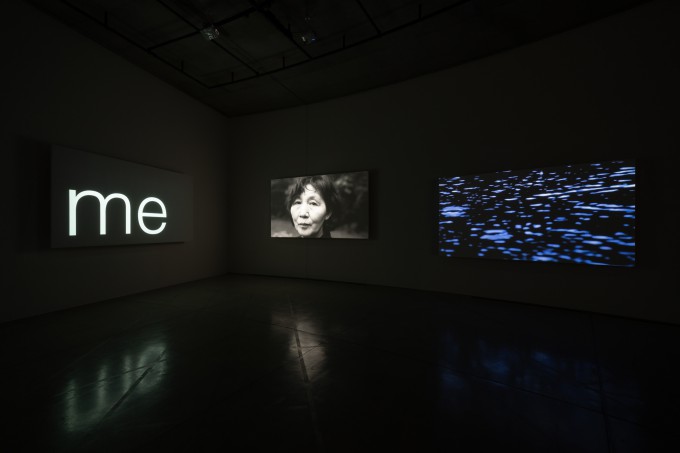 The Ephemeral Present and All Bodies

A woman appears on a screen, and she moves her hand as if she were tracing her own body and the ground. It goes from her fingertips to the shoulder, the side of the ear, over the head and the other ear. It traces her side, feet and reaches the ground. Once it reaches the ground, she slowly moves it on the ground surface as if she confirmed. Shown on the screen to the right are how tree branches sway in the wind, how pine needles and nut chips flow on the water surface, and how raindrops make ripples and how the wind stirs the water, in bluish tone. The pine leaves on the water surface flow fast at times, slowly at other times and go straight and then whirl changing their forms irregularly. The ripples make regular patterns, and raindrops echoing each other make ripples that disappear in a moment. The movements of these trees and water seem to resonate with the women’s movements of tracing the ground. And on the leftmost screen, words such as “mountain,” “day,” “arrived,” “moving,” and “dormant” appear and disappear. The earth-tremoring sound strong and weak is heard as if it filled in the whole exhibit space. It could be a sound reverberating from inside the women, or it could be the earth’s sound responding to the women. Surrounded by such sound, the viewer regards the three screens.
Sisters Gabriella Mangano and Silvana Mangano produced a work during their residency based on a passage from a poem by YOSANO Akiko, which begins with “The day when the mountains move has come” in “Sozorogoto (Rambling remarks)” published in the first issue of Seito (meaning “bluestocking” in Japanese), magazine for women by female writers and editors in Japan in 1911. At that time, Japanese women did not have suffrage and the role model of a Japanese woman was a good wife and wise mother who would fit in the male-centered family system. In the first phrase of the poem that reads, “All the sleeping women are now awake and moving,” the woman is compared to a dormant volcano, and it inspired women of those days.
Even at present, one hundred years later, this poem continues to inspire women. Around 2017, one year before this program was held, it was a time when #Me Too, the sexual harassment accusation movement through SNS and the women’s movement against the inauguration of the U.S. President who had made sexist remarks spread around the world, and the campaign on the status improvement of women was rising. This work by Mangano sisters produced during this residency program can also be seen as a response to this social phenomenon. While this work responds to the social situation in 2018 and deals with the present, it is involved in two kinds of time—the momentary time as the present and time taken in a longer perspective of one hundred years.
Their study of time is also seen in their sculpture, “Her Past, Her Future.” Here, two white pieces of square timber are shaped like a mountain. On the top part of the center where the two pieces of timber meet, the sunset and the sunrise, which never meet, are facing each other in a space between the pieces of timber. What the sunset symbolizes is the accumulation of the past day as well as the beginning of the night. And what the sunrise symbolizes is the accumulation of the time up until the night, yesterday and the beginning of the day that starts now. Both the sunrise and the sunset are involved in the past and the future, and the present appears in a space between the two suns. The present becomes the past as soon as we become aware of it, thus it cannot be grasped in reality. The present is part of the ceaseless flow of time going from the past to the future, and it is the only special moment that never repeats. The present floats ephemerally in the space and is shaped by the past and the future.
The woman who appears in When mountains move at the beginning is not alone. The moment I think there is a woman, she has been replaced by another woman before the viewer is aware. Every woman who appears one after another wears loose and uniform clothing, and they are tracing their bodies and the ground surface as if they were confirming that their bodies and the ground are certainly there under their feet and trying to make their contours appear. How the women repeat similar actions seems to reflect how they make a group and their accumulated intentions are moving each woman. Although they are wearing similar clothes and moving in the similar way, each woman has her own body and face. Here, while each of them exists as an individual, they unify women in the days of “Seito,” those who lived before that and those who would emerge in the future. The only one body here and now involves all the bodies of women who have lived so far and will live from now on.
One body involves all bodies and that continues from the past to the future. The body exists in the transient present, and it certainly exists there containing everything. That the women continue to move quietly as if moving their bodies here and now means to move all bodies and make them resonate, spreading out ripples from the past to the future. 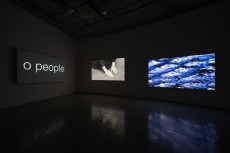 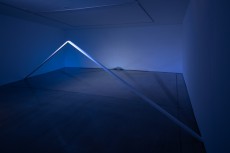