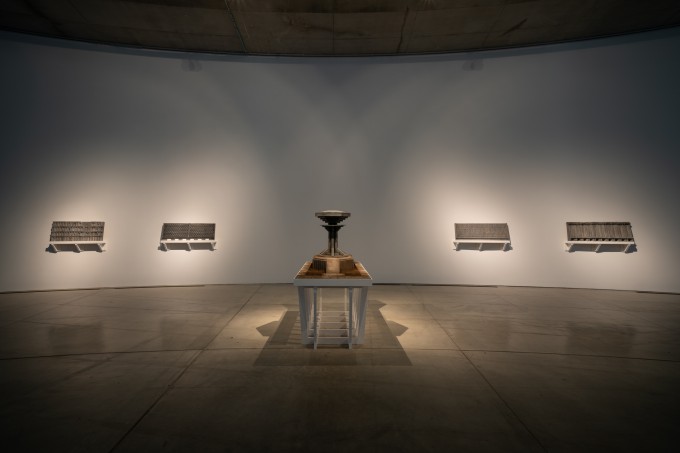 An artwork can sometimes tell more than its creator intends. And Sahil NAIK is no exception. His artwork possessed more meaning than even he could have imagined.
Naik is interested in architecture that is open to speculative narratives and capable of evoking human memories. During his residency at the ACAC, he came into contact with the architecture of ANDO Tadao and through research later discovered the work of TANGE Kenzo, turning his gaze toward the role of architecture in Japan after World War II.
His resident work, titled Monument, Mausoleum, Memory, Modernism, was installed with its back to the large, curving arc of the gallery wall. Located in the center of his exhibit was a nail-like structure with a staircase at its base, flanked on both sides by a total of four reliefs that clung to the gallery wall. Naik conceived his central sculpture from the modernist movement that followed the Second World War, while the geometric patterns visible on the reliefs that hung from the gallery wall were inspired by the facades of modern architecture. To apply the finishing touches to their surface, Naik referenced the aesthetics of brutalist architecture, characterized by its honest, raw construction materials—mainly concrete—left ruggedly exposed.
Examples of these kinds of concrete, geometrically patterned buildings can be found all over Japan today. Monument, Mausoleum, Memory, Modernism has a monument at its center and is surrounded by modern architecture, bearing a striking resemblance to many sights we encounter in Japanese cities today. The Genbaku Dome at the Hiroshima Peace Memorial is a monument in and of itself, simultaneously a testament to the existence of both aggressor and victim. Similarly, Monument, Mausoleum, Memory, Modernism illustrates that buildings in historical places are both monuments and mausoleums, eyewitnesses to an era of modernization. Sturdy as it may appear, several cracks are visible in the repeated concrete patterns that hang from the wall, as if to point out the fragility of our modern order despite its resilient appearance. The round, lid-like shape that caps Naik’s central sculpture brings to mind an atomic mushroom cloud. Naik had originally intended to leave the top of his monument open and hollow inside, similar to a cooling tower seen at nuclear power plants, so viewers could peer in from above.
Here I should highlight the fact that sculptures originally existed as memorials. For Naik, there is no difference between sculpture and architecture, and he works with sculpture as a means to express his interests.(*1) I am forced to ask myself: what meanings can a discussion of the monumentality of architecture have through the medium of sculpture, which has long been used to create monuments?
Naik chose concrete as his primary material. Unassuming and functional, concrete has been an instrumental material in modern architecture. However, concrete expert Professor Adrian Forty points out the paradoxical duality of concrete as both modern and non-modern. Western architects of the twentieth-century fell in love with concrete for its simple, even primitive, method of production that resembles that of mud walls. They aimed to created massive structures, which gave rise to its non-modern nature. (*2) Moreover, the non-modern concrete architecture of Tange Kenzo, whose excessive use of beams mimicked traditional Japanese architecture, provoked Western architects to think about concrete as a primitive material, exacerbating this duality. Additionally, many monuments were saved from going out of style as concrete was seen as a tougher and more modern replacement for stone. Artists, on the other hand, have used concrete for a durable, seamless finish, but it has been treated as a peripheral material.(*3) Regarded by architects as a mass that retains the flaws of the workers—in other words, a sculptural material—concrete fell into disuse by artists, though it still proved useful when building monuments for its durability and newer impression. For imaginative contemporary sculptures, it may be inconvenient to recall the architectural functionality of concrete or its monumental symbolism. The material is too loaded with associations to the symbolism and functionality reminiscent of religious architecture and sculpture.
But to Naik, these associations do not exist. He sees no barriers between sculpture and architecture. As seen in the the documentation of his artwork, there is little difference between sculpture and architecture in terms of shape, and perhaps historical context is the only thing differentiating one from the other. And so Naik, meandering between fields and implications, points out the monumentality of architecture using sculptures of concrete, unexpectedly highlighting the instability of these very frameworks. 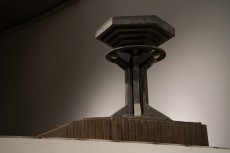 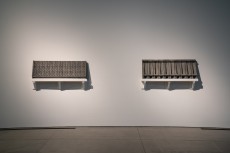 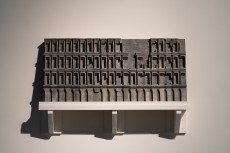 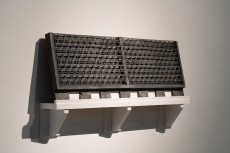