TADA Tomomitsu Solo Exhibition, “Do these soulless, vacant puppets feel any distance or shame living in a world where they blindly accept information from corrupt, hollow shells of humans and, without even thinking for themselves, naively cause each other pain…☆ 卍” 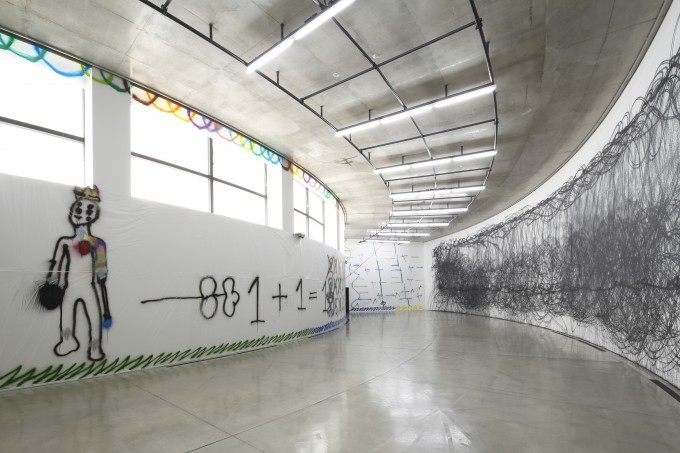 For the Proof of the Inviolability of Spiritual Freedom: Drawing and Exhibition of TADA Tomomitsu

This exhibition is full of positive anger.
First of all, it is shown clearly in the expression of the title. Let me quote the title which is long enough to say that it is odd.
“Do these soulless, vacant puppets feel any disgrace or shame living in a world where they blindly accept information from corrupt, hollow shells of humans and, without even thinking for themselves, naively cause each other pain…✩ 卍 “ (Originally there is a face of an animal like a bear between the asterisk and the 卍 fylfot.)
The title has 125 letters in Japanese. This number of letters and characters reminds us of Twitter where one tweet is limited to 140 letters and characters in the case of Japanese. Considering that he dares to write with such a word number for criticism against SNS, it possibly implies that “soulless puppets” refer to the so-called online neo-nationalists. Even if there is no such implication in the number of letters and characters, it is possible to read this interrogative sentence as a criticism against those who utter hate speech saying, “Don’t you know that your existence itself is a shame in the existential meaning?”
Anyway there is no doubt that he is angry about the current situation, but he is never overwhelmed by anger. Even if the intensity of anger is strong, he knows how to convert it to something creative and aesthetic. That technique is amply demonstrated in the composition of his exhibition.

This exhibition consists of four parts. If I say the conclusion first, the third room plays the role of a divide in asserting the inviolability while each of the second and fourth room shows the possibility of what can be conceived from the fundamental human rights. (Beware that it is a possibility not an option.) Or you can say that he is trying to prove the preciousness of spiritual freedom by making works in the second and fourth rooms.
This proof will be a considerably risky bet. In the first place, if you are an artist, you should be able to claim freedom in any work. And yet Tada challenged a direct confrontation. He actually brought out the concept of “spiritual freedom,” and succeeded in its “proof.” How did he do that? I will examine his proof method more closely below.

The first room functions as an introduction, so to speak. A long title characterizing this exhibition, a foreword by the organizer, and two small pieces are hung in such a small room that it is difficult to call it an exhibition room.

The second room is long, tall and narrow following a curve. A freehand drawing is drawn on the whole wall on the right hand side just inside the entrance. I said that it is “a hand drawing,” but actually the drawing stroke of the arc is so large that we can hardly believe that it was produced by the physical size of a human. I was interested in who did it or how it was drawn. With the drawing in front of us, which is liberated from the human size, we come to enjoy liberation of our spirit with a subtle feeling of awe. (In fact, as it seems to have adopted the watering system used for gardening, it should exceed the limits of human hands.)
Several numbers are drawn on the wall on the opposite side. The most eye-catching among them is a formula, 1 + 1 = 1. This formula of mysticism (that could be something secretly telling the world’s truth), which was also written on the wall in “Nostalgia,” a 1983 film by Andrei Tarkovsky, resonates amazingly with an over-scale drawing placed face-to-face.
How about the short wall sandwiched between the two walls drawing a curve? There is a framed drawing on the side close to the entrance. There is only one freehand straight line drawn almost horizontally. Regarding what this line means, the following passage in “Lines” by Tim Ingold provides useful insight.
“…The relentlessly dichotomizing dialectic of modern thought has, at one time or another, associated straightness with mind as against matter, with rational thought as against sensory perception, with intellect as against intuition, with science as against traditional knowledge, with male as against female, with civilization as against primitives, and—on the most general level—with culture as against nature.” Ingold called such a line “an icon of modernity.” This short straight line that is the only framed item in this exhibition is carefully displayed as “an icon of modernity” in its earliest stage based on the interest of natural history, so to speak.
On another short wall, there are cat’s mew drawn both in katakana and hiragana letters. Writing or recording voice in letters is deeply involved in “modernization” as Walter J. Ong explained, for example. It is obvious that Tada is trying to study drawings in view of both pre- and post- modernization.

The third room is enclosed with black curtains. Close to the ceiling in the corner opposite the entrance are blue neon tubes that read “spiritual freedom” in Japanese. If they were in kanji characters, there would be a lot of straight lines, but since they are written in hiragana, they consist of curved lines. As a result, they look like a drawing or graffiti. In other words, they look like words in their beginning. Even for those visitors who cannot read Japanese, they could sense that quality due to the curves or because it looks like a drawing. At the same time, the blue light makes the words or the concept look almost sublime. The physical inviolability that it is in an unreachable high place enhances its sublimity.
The forth room is much more compact in the height of the ceiling and area, compared to what we have seen so far. It looks even ordinary. The light in the room, however, is dark like twilight, so we do not feel that it is perfectly ordinary. It is in between the ordinary and the extraordinary, as one might say.
Installed in the center of the room is a large oval board as if floating. There are a number of things on it that look like origami or ceramics. They look either finished or in the process. On the wall are three pieces of ceramic ware that look like a bear’s face. They look like masks, but then it is strange that they are made of ceramic, and their size is small. There are no openings for the eyes. The arrangements of the whole room, however, make things look related to folklore or human activities, that is, mask-like things.

There is a room where inviolability as well as sublimity of “spiritual freedom” can be experienced, and the room prior to it was an over-scaled room that transcends rationality. For some reason, it looks plain. A room following it seems to have been incidentally born in between the ordinary and the extraordinary, and is filled with things that are totally familiar to human hands. It is obvious that the third room is considered to be the base point, that is, a divide, and the contrast between the second and the forth room is emphasized. And it is also clear that the both rooms are related to the act of expression or spiritual freedom of expression. Tada has presented two possibilities that could be conceived from “spiritual freedom.”
If I would raise a question about the exhibition here, it is possible to critically claim that he should present an alternative that people would frown at, like pornography.
Tada, however, did not do that. Why? Probably because the destination of his interest is not to question where the limit of spiritual freedom is, but to think about the reason why such a concept of spiritual freedom is conceived in the first place. That is why he tried to probe into the possibilities of drawing based on subtle physical ecstasy instead of pornography. One of the finest things this time is that Tada tried to think about it, not confined to the issue of lines literally, but including expressions closely related to hands as being presented in the fourth room, as if Ingold was introducing various examples. And another good thing is that he made it possible to experience it in the exhibition space. Tada has challenged to prove, not through words, the inviolability of fundamental human rights in today’s Japan, and wonderfully succeeded in doing it. I’d like to express my sincere respect to the artist.

1) Tada says that he did not know of this scene in the film. Rather, during his production of this exhibition, he thought of fragments of the images in Ingmar Bergman’s The Seventh Seal. (e-mail to the writer, July 10, 2018) 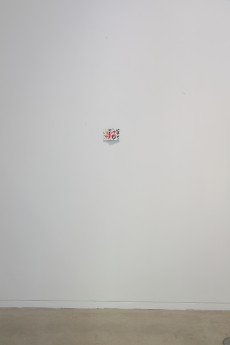 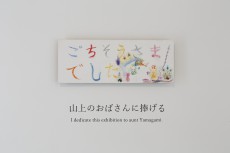 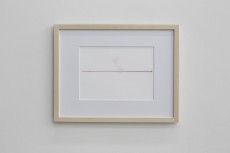 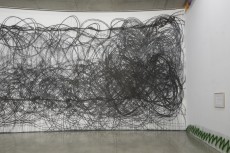 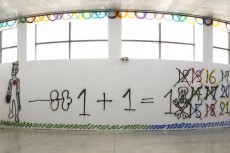 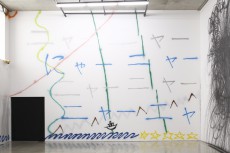 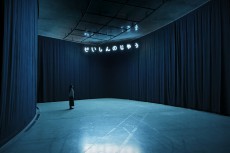 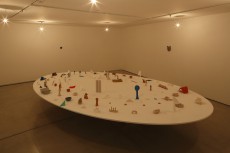 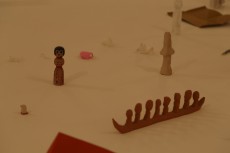