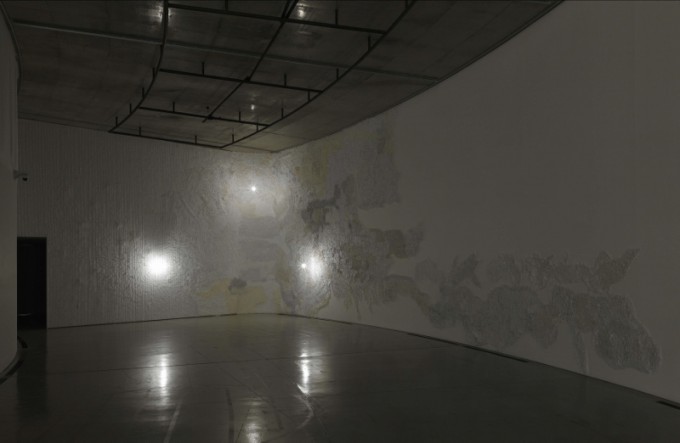 Gallery A of ACAC has a special acoustic feature as it is curved like a half-doughnut, 6 meters high. This form reflects sounds intricately: you hear belated sound from somewhere unexpectedly, or a whisper spoken near the entrance goes sharply around the curve and is heard as if it were spoken beside you near the exit. And the exit is not visible from the entrance. In the gallery, therefore, dramatic sounds are produced due to reverberations. At the same time, sounds of a musical piece of fast tempo for instance get mixed up with delays and echoes so that the original melody turns unclear. What is more, as the sound does not spread uniformly from the sound source, the sound you hear is subtly different depending on where you stand.

YAMASAKI Ami who is actively working as a “voice artist” literally focusing on voice as an artist. When she presents a performance using voice, she often combines her voice with a video or an installation made as a piece of work, as well as pre-recorded sound and sound coming from an object such as a glass or shell. Through such an interaction, she sets up space and time in her work. Yamasaki who senses sounds using her “ears, vocal cords and skin as an auditory organ,”(1) began producing “SONG / the animal in man / RHYTHM” through dialogues with the sound space at ACAC. In the empty gallery, she utters a variety of voices changing pitch and loudness to confirm how and where each sound reflects or echoes. She grasps differences in sounds that she perceives as “shades,” and in order to visualize them, she sticks pieces of paper torn into the shape of a long, slender triangle which she calls “feather” on the wall. (fig.1) She does it, on the other hand, to change sound reverberations in the space because these “feathers” affect them, absorb and/or direct sounds depending on materials and shapes. For this exhibition, the wall in the right-angled corner of the gallery was made into a curve, which shows her aggressive attempt to change the gallery space. Though she changes sounds in the space, she does not mean to make reverberations sound totally different. Rather, it is kind of tuning to make sounds easier to deal with for us to hear and for her to play with.

Having no intention of reproducing or expressing some specific
subject, the artist converts the state of sounds into “feathers” in her work. As the title indicates, different shapes of torn pieces of paper and the state of these gathered pieces remind us of animal’s coat of fur. Though all collected pieces of paper are white, they have a diverse range of shades according to material and quality. As pieces of the same hue are treated as a mass and each mass flows in a certain direction, there emerge respective rhythms of the plural forms crossing on the surface. The “animal” in this piece is not confined to a resemblance in terms of appearance. The repetitive work that Yamasaki kept doing for dozens of hours resulted in something like automatic writing. Consequently, her “body was unconsciously raised and was copied to produce a beast-like pattern in a completely unexpected way.”(2) You might say that it is an image of consciousness liberated from oneself, in other words, an image related to unconsciousness and instinct. When her performance using her voice reminiscent of a bird song or a beast cry is added, there emerges, as the backdrop, a scene like a jungle or the depths of the mountains far apart from inhabited world, in which darkness, caves and animals have predominance.

Yamasaki’s voices uttered straightforward from her bodily organs sound like animals’ at times, and speaking of this exhibition, the forms are unconsciously connected with “beast.” Consequently, although both her utterance and installation are based on simple repetitions, the work reminds us of overflowing animality, primitive instinct and the expression of the unreasoning world. Using certain kinds of voices repeatedly in front of the installation, which stayed unchanged all through the exhibition period, she did not make her voice different according to her mood or feelings of the day. As her voice, which sounded like words or cries of animals varied in pitch, sound and vibration, it might have represented specific units used for exploring this place. In this meaning, each voice and each act of tearing and sticking pieces of paper can be described as the unit of the action of confirming the world surrounding us and internalizing it. Her consequent performance and installation are to externalize and substantialize what is perceived. The artist repeats these small units of confirmation persistently. In the second half of the exhibition, she disassembled pieces from the installation, an integration of the reaction of sounds and unconsciously created forms, and drew them. (She called it an act of taking out hidden beasts. (3) They are drawn with the method of piling up tiny blocks. (fig.2)

The same process applies to the installation produced this time. The installation is largely involved in creating the voice performance along with the sounds from the video and shells, and this method has been used again and again since 2008. In this respect, her installation might be considered one of the tools like shells and a glass accompanying her voice in the performance, which she repeatedly uses to perceive the world. This installation, which plays a role in changing sound, is formed as a piece of work only when her voice is brought together. In other words and strictly speaking, her work can’t be complete unless she is there. Her voice, uttered ad lib as she concentrates in a performance of improvisation, is affected by her reaction to reflections of sound at the time. That is the voice coming from a trained body with experience. Also the installation shows how she, led by such reactions, has visualized memories of experiences recorded on her body, which she calls “unconscious physicality.”(4) If so, what is going on here, conscious or unconscious, is totally and strongly concerned about herself as an individual, and her direct reaction and her direct mediation are major factors for forming her work. In this sense, both the contents and the state of the work might have been under her absolute control as an artist.

This time, however, as the show is neither a solo exhibition nor performance, and it is mainly composed of displays involving other artists’ works, it must have been difficult for her to control everything in regard to her presentation. Three light bulbs without shades hung in front of her work, looking like a dark cave, functioned as a device to make the viewer sense auditory elements visually through swaying shadows. (fig.3) Shadows moving over feathers, which look like animals’ coats of fur, make us think of heartbeats as if we were actually hearing lub-dub. It was an effect of the work and at the same time, it was an attempt to make up for the absence of the artist. It played a role as a device to emit inaudible sound. In the process of this production, a part of the installation was left to be completed by other people including volunteers for the first time. Was any change brought about in the condition of Yamasaki’s work due to the participation of others in the work and production? To say the least, viewers are able to go beyond the artist’s intention. Even if they had not viewed the sign of her unconsciousness or sounds, which she intended to communicate, they might have perceived human wish to create, to want to grasp the world, by looking at the massive amount of feathers stuck repetitively. Also they might have seen her fundamental desire to perceive the world in the likenesses of beasts. In the environment of the gallery of ACAC with a unique acoustic feature, they might have perceived sounds different from those realized by Yamasaki, using method different from Yamasaki’s. Nevertheless, this work seems inseparably linked to the body of Yamasaki herself. The change in the condition of the work caused by the artist’s presence and absence seemed to be the process of production itself, making us think of the phases of its development.

(1) According to Yamasaki’s writing for her exhibition reference.
(2) The same writing in footnote 1.
(3) Interview with Yamasaki on December 18, 2013 at ACAC.
(4) The same interview as above. 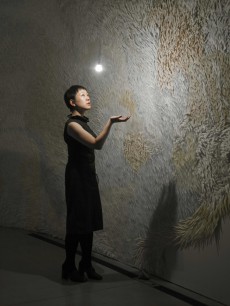 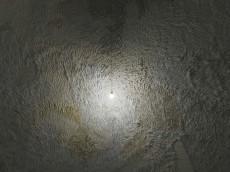 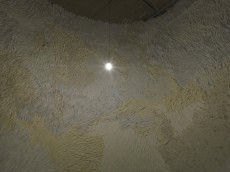