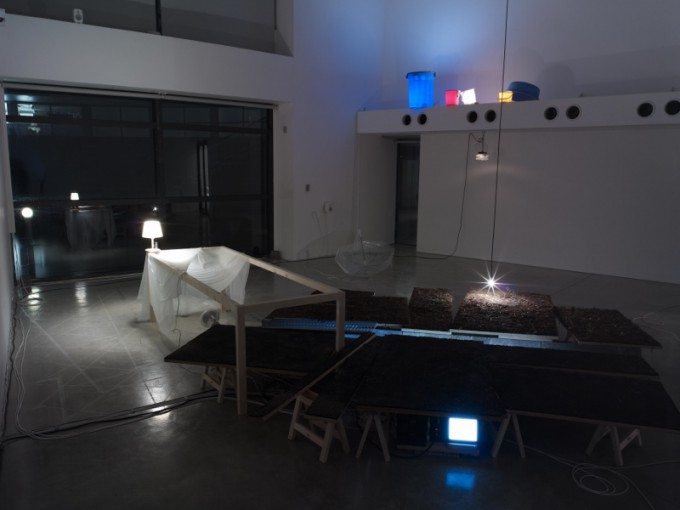 Stages or Sculptures to Create the Parallel World in Everyday Life

A gutter made from concrete is installed in the center of the gallery, and heavy sheets of plywood covered with soil are placed on the near side of the gutter from the entrance, and then there is a sheet of asphalt plywood on the opposite side. A clock encased in glass has been put on the soil, and a fluorescent lamp installed in the gutter partly with gratings flashes on and off continuously. A wooden frame resembling the shape of a bed has one leg on the sheet of asphalt plywood, and a thin white-colored curtain covers almost half of the
flame, along with a desk lamp which stands in the corner. You also find a small electric fan near its legs. In addition to such things, a plastic umbrella is set upside down in a disorderly fashion, with water gathering inside, again near the entrance, and there are some buckets and basins on the top of the ventilation duct above the umbrella. A receiver from an old-fashioned telephone is leant against the wall much nearer to the entrance. Several compact white loudspeakers are also installed onto the wall, and lots of wires are running to the floor in a seemingly careless yet tidy way. The rest of the things in the gallery include a small monitor and some tools under the sheet of asphalt plywood (fig.1). The artist who created this artwork, HISAKADO Tsuyoshi, graduated from the department of sculpture at university.

Such information might at first remind you of sculpture or installation
using everyday necessities. It is certainly true by outward appearance, but once you experience this artwork you consider it to be a performance art. All the everyday items, seeming to be arranged carelessly, are under the control of computer programming in order to generate movement. On entering the gallery, you will initially hear some sounds, for example the voice of a child, a telephone ringing, time signal and the sound of rain. Sometimes you hear the sound of water bubbling in the umbrella and at other times the sound of the
electric fan revolving smoothly. These different sounds sometimes resonate faintly, or at other times very loudly and at random. When you stay in the gallery for a while, you will notice a system of switches blinking lights on and off at a given signal of sound; the fluorescent lamp installed in the gutter, the desk lamp, light bulbs in the buckets and a round fluorescent lamp hung from the ceiling. On hearing the sound, you see one of the lights on. And the wind blows, the curtain sways and the water murmurs. Such very ordinary and natural phenomena are happening over and over again randomly. Describing them in words makes you think them as normal or nothing special. However, Hisakado designs marvelously fertile interaction by means of randomly arranging objects to create a plain and simple phenomena.

If you take your time to walk around this art installation, you can find a series of phenomena of sounds and lights occuring approximately every 10 minutes. In precise terms all of the phenomena happens for the duration of 6 minutes and 50 seconds, and repeats for the same duration. Each phenomenon is programmed to happen at random to some extent. This means that completely the same composition never repeats, though there is some limitation in its permutations.
But all the phenomena happen within 6 minutes and 50 seconds without fail. In a sense, it seems like repeatedly listening to improvisation composed of several recorded sound sources. What is interesting is that there is not much difference among any cycle. Even if there are changes to the order of the blinking light, uttered voices and others, there is no surprise through dramatic changes and accidental composition. It gives the strong impression that a certain cycle of phenomena repeats. Even accidental happenings are also under the control of the programming. The cycle of ordinary phenomena changes each order slightly and happens repeatedly. That is also associated with our everyday life. We cannot live the same day, but similar days repeat over and over again. The artwork epitomizes what Kamo no Chomei remarked; the flowing river never stops and yet the water never stays the same(1).

What gives richness and a significant leap in the repetition of similar days is an encounter with an unexpected person. As for this artwork as well, the existence of audiences experiencing the artwork causes the most unexpected occurrence. Whether there is an audience or not, this artwork repeats the same thing, making continuous slight differences until the power off. But there is a significant difference in artwork between when you experience it alone and when view it with someone else. As Hisakado says, he wants to create a space to generate interaction amongst audiences(2), his artwork turns out to be a stage that plays a role like an interface in changing the relationship among audiences. When someone else comes in, you will find that you have stood on the stage since the moment you entered the gallery.

The title of this work is Hare or Ke -- Aomori --. “Hare and Ke” means
the extraordinary and ordinary, and so this artwork consists of a variety of contrasting relations and binomial confrontation. As Hisakado says his imagination was set off with existence of ACAC giving an impression as an artifact built in the forest, and he considered different borders and their mutual relations on the basis of a concept of Japanese unique folklore, “Hare and Ke”(3) , he contrasts artificial asphalt and soil with a gutter between them, which is surrounded by things to cause different phenomena. Each phenomenon is very ordinary and common, but by combining them into a kind of music generates extraordinary experience of “Hare”. Whilst experiencing fragments of everyday life in repetition, the moment comes that this place is dramatically converted to the stage of “Hare”. Senses of human beings become gradually apparent through the accumulation of rapidly repeating fragmental phenomena, which leads us unnoticeably to the parallel world of “Hare”. To invite us to another dimension by repetition of phenomena is Hisakado’s sculpture technique.

Another of his artworks titled after that. (fig.2) is a disco ball covered
with round mirrors to which clocks are attached, and on every clock hand there is a mirror attached . Bluish white spotlights of LED are directed from all quarters on the disco ball revolving with a motor, reflecting diffusely onto the mirrors. Countless sounds of the clocks ticking echo throughout the space called silent disco. As Hisakada says, it looks as if Nobita and his friends travel through space-time after entering a drawer of his desk (4), he incarnates another dimension linked with the drawer of everyday life, by bringing out the potential of a mirror that is an equipment designed to reflect our daily life. He attempts to create the fictional parallel world of everyday life, like an animated world, by means of his installation art. While the artist invites us to experience the extraordinary world of “Hare” through assembling sounds and lights by programming in the Hare or Ke --Aomori--, he creates another dimension through reflecting time via mirrors in the After That. Both artworks are considered as behaviour for pulling up our perception onto the stage of “Hare” or the parallel world, that is, a hidden side of everyday life, by generating extraordinary relations among everyday things using his sculpture technique. This new technique can create another world just by slightly changing the way daily phenomena happens, which is peculiar to the generation immersed in the parallel or animated world linked with reality. Becoming immersed in the extraordinary and beautiful world composed of ordinary and realistic elements enables us to perceive our daily life in a new and fresh manner.

(1) KAMO NO Chomei, 1989, Hojoki, Tokyo: Iwanami Shoten.
(2) Interview with HISAKADO Tsuyoshi in the Aomori Contemporary Art Centre on December 9, 2013. Published in AC2 no.15.
(3) Excerpted from artist’s explanation printed on a brochure distributed in the exhibition.
(4) Ibid. 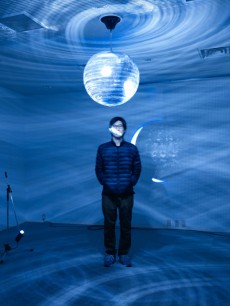 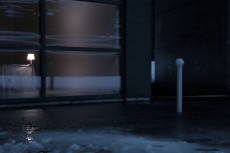 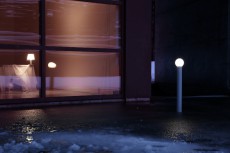 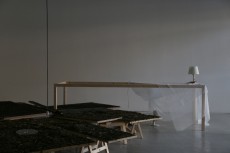 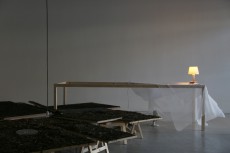 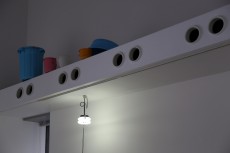 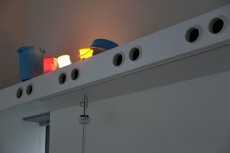 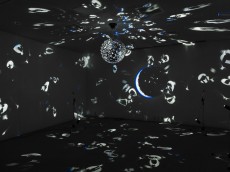 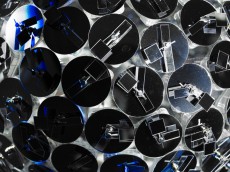 after that. photo: YAMAMOTO Tadasu