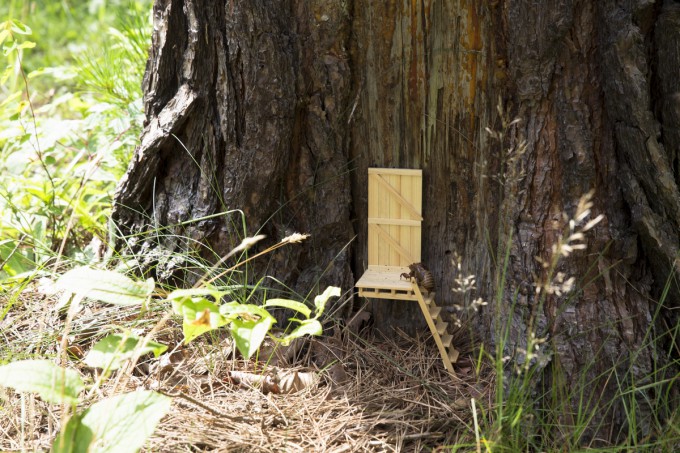 Architectural Methods Based on Somatic Experience

Worapong Manupipapong has enjoyed drawing since his childhood and so he aspired to learn fine arts in a university, but couldn’t obtain his parents’ approval, then he decided to study architecture, an interdisciplinary course between arts and science. He majored in interior architecture, the study of mainly interior spaces inside buildings, unfamiliar to Japanese people, and practiced interior design for two years after graduation. Due to the nature of interior design, his work only related to designing commercial buildings, and as he felt bored with that, Manupipapong went over to America to study basic knowledge of arts in general for about a year, laying the groundwork for practices across both disciplines, architecture and arts. Thereafter he studied architecture again in the Netherlands and Sweden, and came to create architectural works by his own hands, that is, minimal spaces regarded both as installation and as building, similar to his current works.

For this exhibition in Aomori, he made works classified roughly into three types, under the theme of minimal intimate space and space that anyone can create with their own hands. Let me firstly introduce a unit of work in response to his surrounding environment of Aomori centering on Aomori Contemporary Art Centre (ACAC). In a meeting held directly after his arrival at ACAC, Manupipapong made an impressive remark about his first impression; this building doesn’t have a face. After our walking through a narrow path in the forest, a circular building suddenly appears at a place where there is no sign of any building, but without a symbolic entrance, the path leads to an outside cloister passing down the middle of the building. We are spontaneously guided to inside the site, then inside the building, but we cannot readily find a front entrance that an ordinary building commonly features, that is, a point regarded as an architectural face. Indeed, there is no need for a splendid entrance to this building standing secretly in the forest, created under the concept of invisible architecture, but its face actually exists at a place different from the entrance door. Whilst enjoying rambling around this site which consists of three buildings, that is, the Exhibition Hall, Creative Hall as a stronghold for artists’ creation, and Residential Hall for accommodating them, Manupipapong discovered the spot to be considered as its face, in front of a path between Creative Hall and Exhibition Hall. The fact that the architectural face exists immediately before the path where artists pass, makes us to recognize that it is here that creation comes out. Manupipapong determined the spot as where we can appreciate this architecture further, and built here an arbor as a device to see landscapes by his own hands (fig.1). A Japanese red pine was set upright in the middle, surrounded with four poles, from which as a starting point two rooms were placed at the back and forth. In a forward direction from the arbor, we can see the whole image of the building reflected on the pond. The front room with the floor in a lower position looks to the Water Terrace of the Exhibition Hall (fig.2), but the rear room with the floor in a higher position looks out towards the forest (fig. 3). As sitting on the front floor, we directly face the Exhibition Hall, and a landscape comes into sight in a proper position. When entering this room, we hear a comforting song from the water basin before our eyes, because different sounds from the forward are integrated together due to roof structure converging into the recesses. On the other hand, when going up to the rear room in a higher position, the view changes completely, we see tall trees of the forest open out before our eyes, and the song of cicadas and insects rings out closer to our ears. It’s only two-meters difference in height of the floors that dramatically changes the environment that we can experience. The front room exists to see the contemporary architecture, and the rear room to feel the forest. The minimal structure offers us an experience of completely different environments.

At the present day when a computer can perform complicated structural calculations, many architects tend to develop structure itself as a radical expression. However, Manupipapong keeps a critical distance from contemporary architecture, pursuing the possibility for physical experience further than formative expression. He explores minimal space that anyone can create, suggesting that on the axis of basic structure we can build through our senses and experience.

Secondly, Manupipapong created microscopic buildings titled as Secret Space (fig.4). This work filled with his delicate and tender senses of environment is based upon his thorough observations. It is symbolic of the exhibition title, “trans×form”, succeeding in transforming scale and viewpoint admirably. As the title of the work shows, ten secret spaces were placed in ACAC. Manupipapong turned his thought towards the existence of alien creatures such as insects and small animals in this neighborhood, and created buildings to perceive ACAC as another world through their eye level. He put small stairs on a ventilation duct on a floor in the gallery to create a secret chamber under the floor (fig.5), installed a miniature window and door in a tree to bring the life inside the tree to mind (fig.6), inserted a lattice of sticks into a foot light, like a sliding screen window, to liken a lighting equipment to a house (fig.7), and placed miniature stairs between large books and a shelf, to invite us to imagine that the stairs lead to a sacred place (fig.8). Through dealing with such architectural icons and using these component parts as symbolic signs, he transformed ACAC into a city. The pieces prompt us to imagine how small living creatures experience this megalopolis from their eye level, triggering another perspective on other beings and different life styles. By imagining the world on a completely different scale of creatures with an extremely different sense of value, we are reminded that cities and societies with alien value systems exist nearby, and spontaneously turn our attention to this. These miniature works tenderly demonstrates the fullness we can feel by thinking from a viewpoint of such a different beings and accepting it. In Gulliver’s Travels, Jonathan Swift narrated the process that Gulliver experienced through both hardship and happiness. In countries of both midgets and giants he reveals that many things alien to us exist, which seems as if he critically satirized the then society, denying that the United Kingdom is the only absolute existence. In Secret Space, Manupipapong also appeals for a diversity of the world seen only when standing at the eye level of the alien creatures that we cannot readily get, through brilliantly transforming scale. These small buildings are almost a boundary between another world and the viewers.

Lastly, let me introduce artworks Manupipapong created in addition to works above, in the latter half of the exhibition. This piece asks a sharp question about practicing architecture. There are several wooden structures such as a wooden decked amphitheater and bench installed outside in ACAC. These are what Manupipapong paid attention to. For example, he stripped the three-millimeter-thick dingy surfaces from a worn bench, and converted them to an almost full-length drawing (fig.9). To be specific, as if presenting an isometric drawing[i], he rearranged stripped surfaces on the wall, at the same position like a skin stripped from the seat to draw a seat, and a skin from the leg to draw a leg, and finally completed a two-dimensional drawing from a three-dimensional object. That is to say, an isometric drawing resembling a three-dimensional object was extracted from the object. The drawing has a three-dimensional effect and material presence more than an original object stripped of its surface. The bench without its skin looks astonishingly smooth and flat. This confuses our somatic sensation with a focus on sight.

In The Ecological Approach to Visual Perception[ii], J. J. Gibson remarks, in referring to replicating and copying, the terms “copy”, “replicate”, “duplicate” and “image”, however familiar, are vague and slippery. The four terms above cannot exactly express Manupipapong’s action of transforming an object to a plane surface on a scale of 1 to 1, but his action reflects all of the aspects of these terms. These slippery artworks show how to give exact description of a building, as well as his unique depiction. He explores how to perceive space in a more direct and exact way through drawing with skins of an object on a scale of 1 to 1.

What is architecture? What does it mean to exist as a three dimensional object or as drawing? What is to be a real thing? What does it mean to actually exisit? These are some of the questions that the artworks provoke. The works question our perception and the recognition of human beings through drawing full-length space, appealing to human somatic sensation. At times Manupipapong offers a critique of architecture, other times he prompts us to consider the diversity of the world. He also raises a doubt towards human perception, through practicing all architectural actions based on our own somatic sensation. He keeps a broad-minded and flexible approach to his practices at all times, accepting and responding to the landscape before his eyes.

[i] Isometric projection is a method for visually representing three-dimensional objects in two dimensions in engineering drawings. It’s a kind of axonometric projection in which the three coordinate axes appear equally foreshortened and the angles between any two of them are 120 degrees. 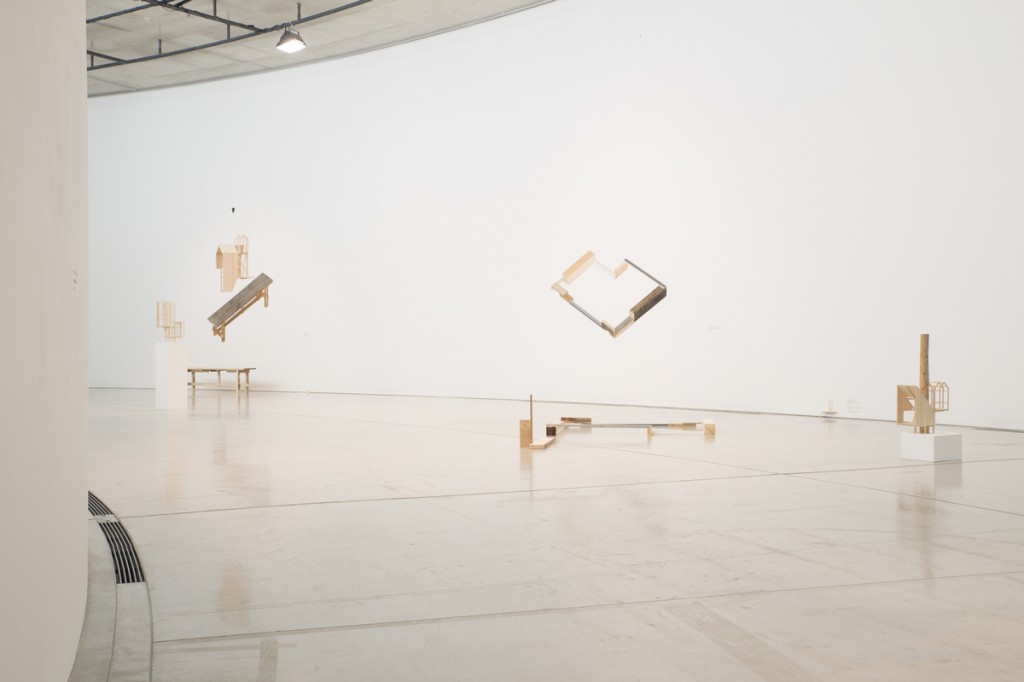 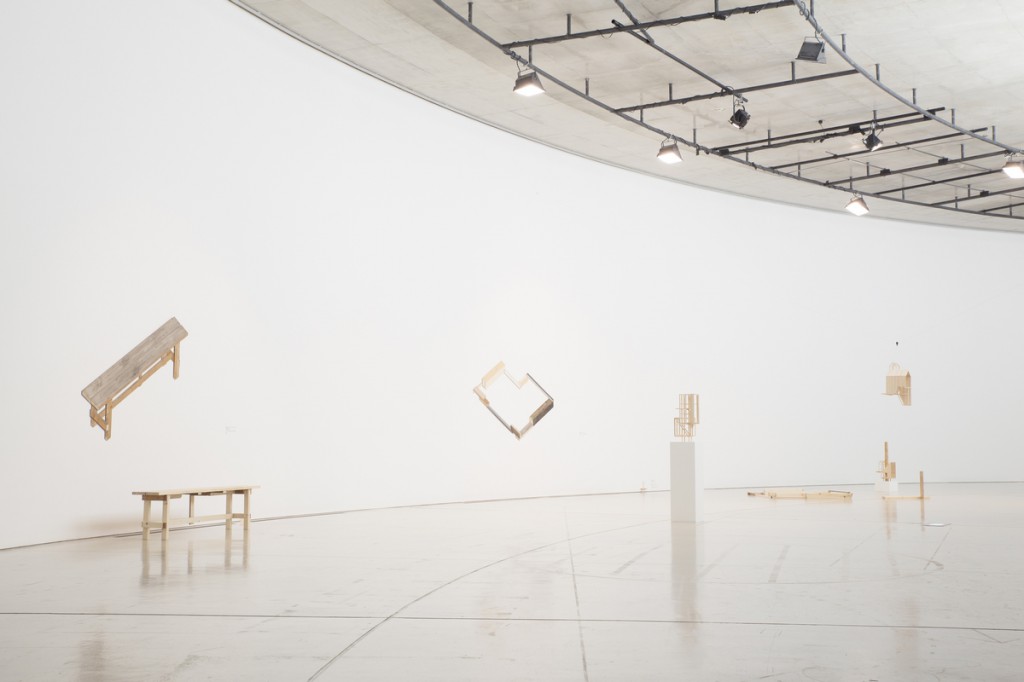 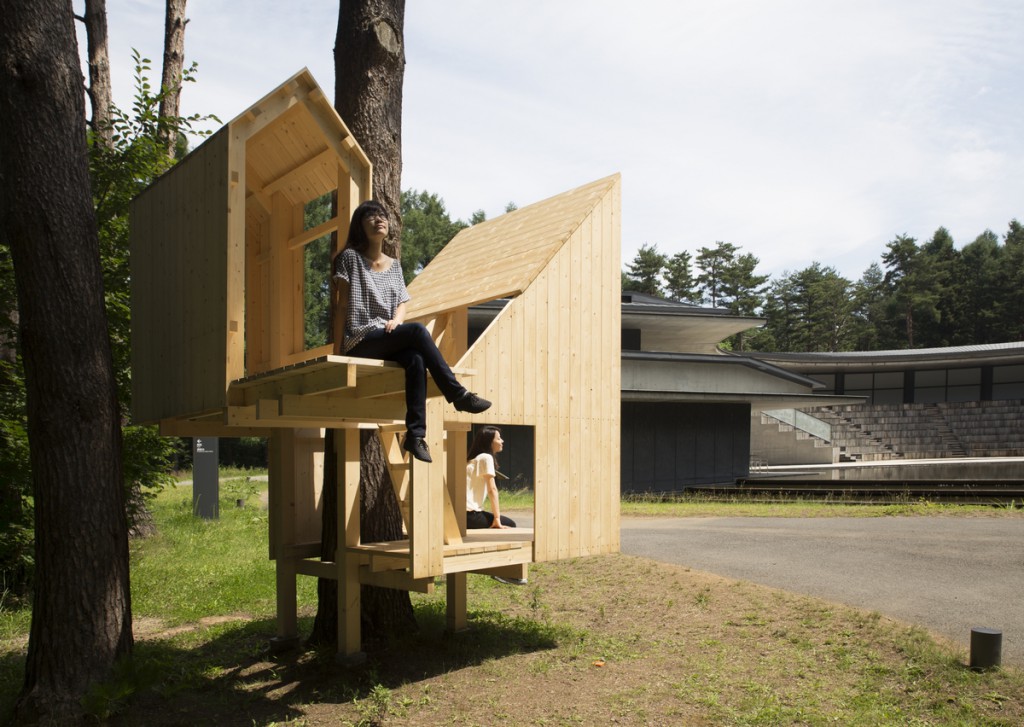 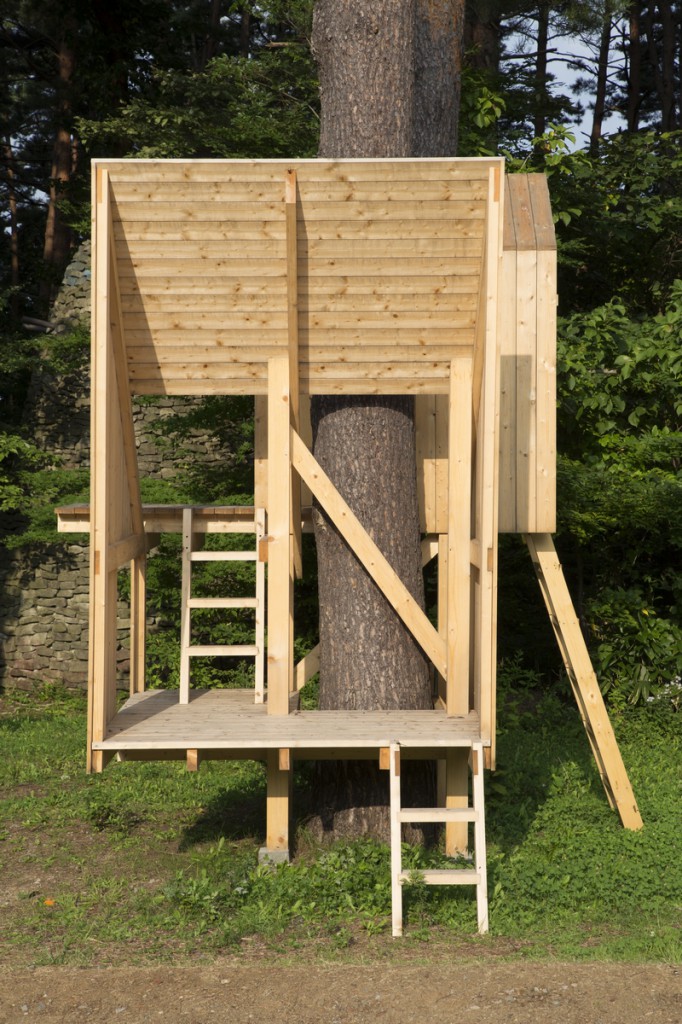 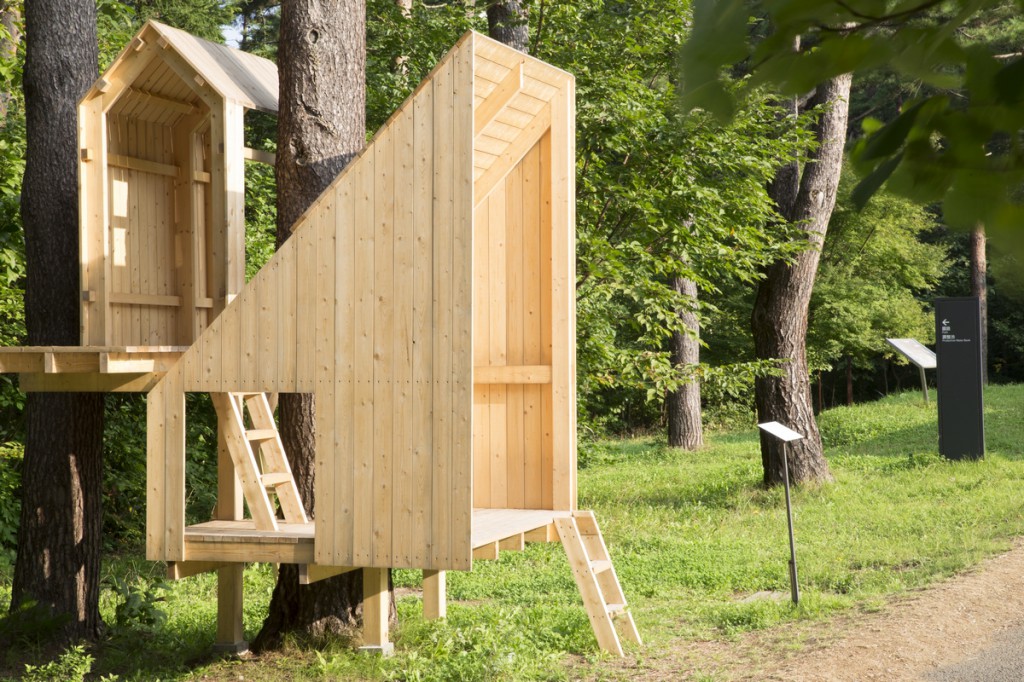 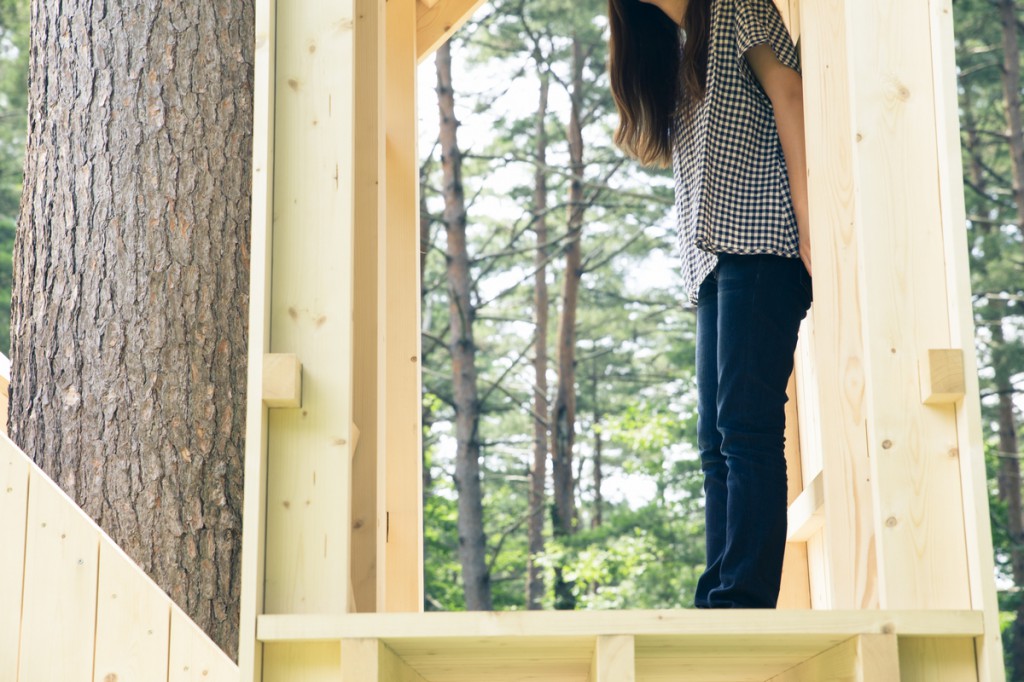 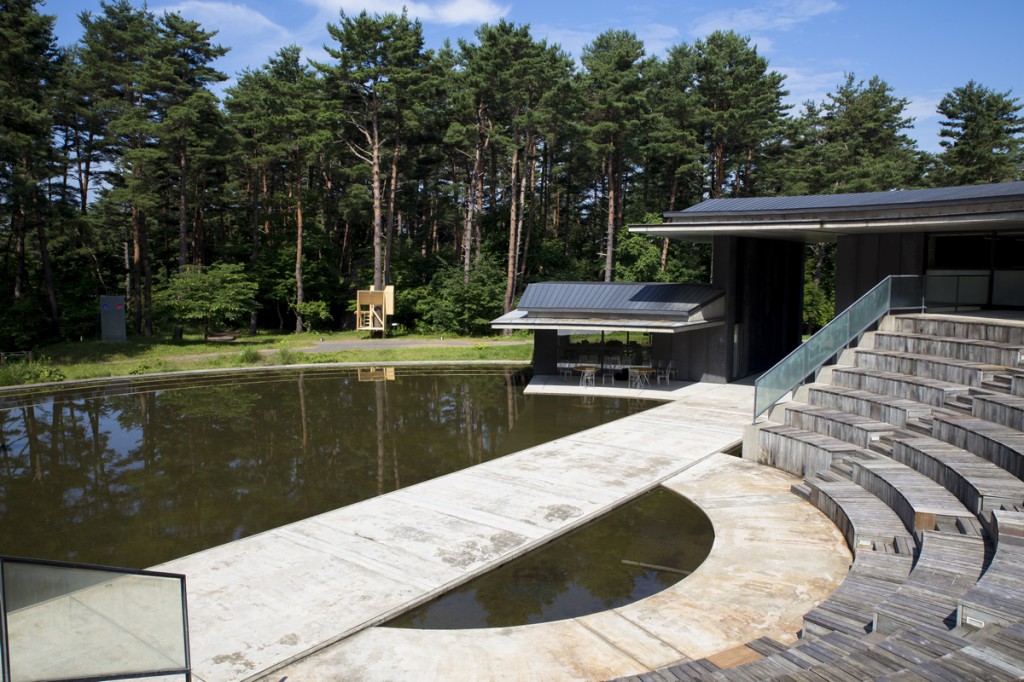 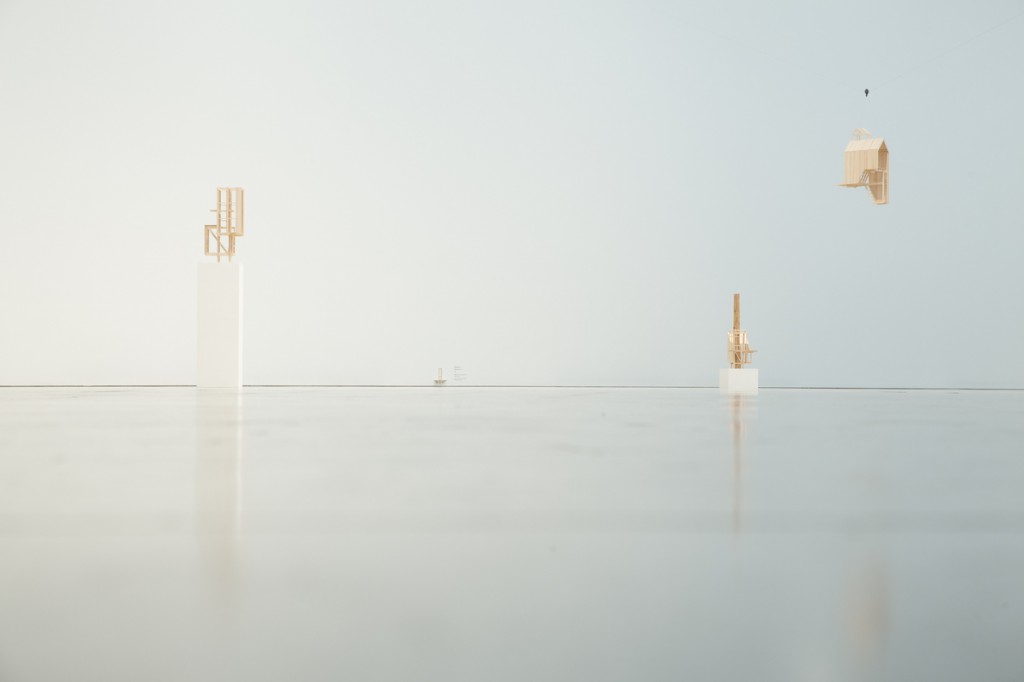 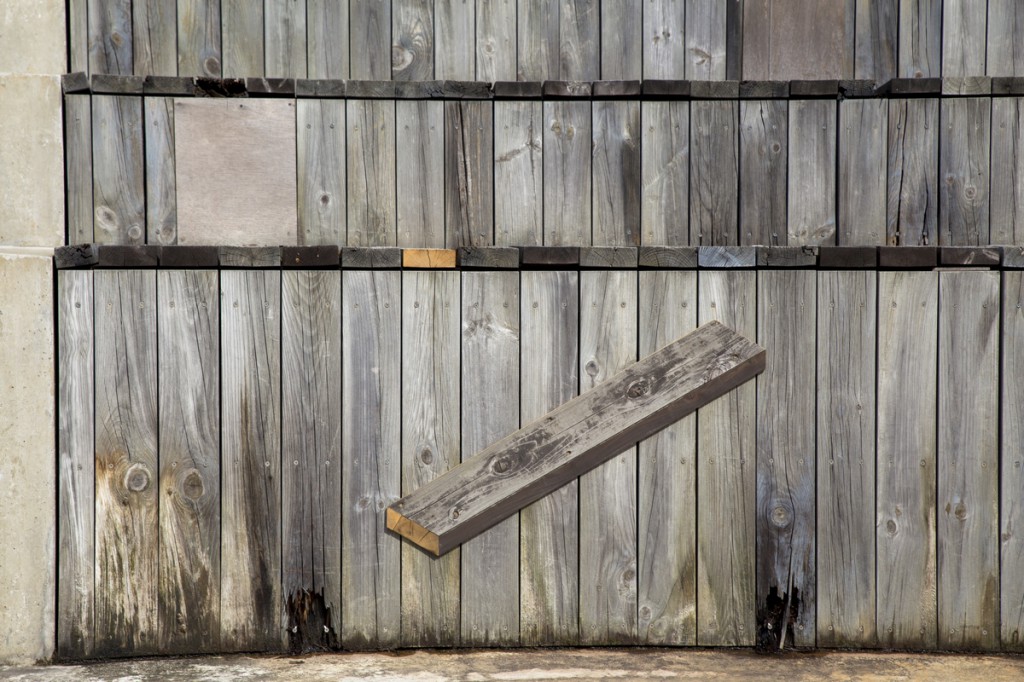 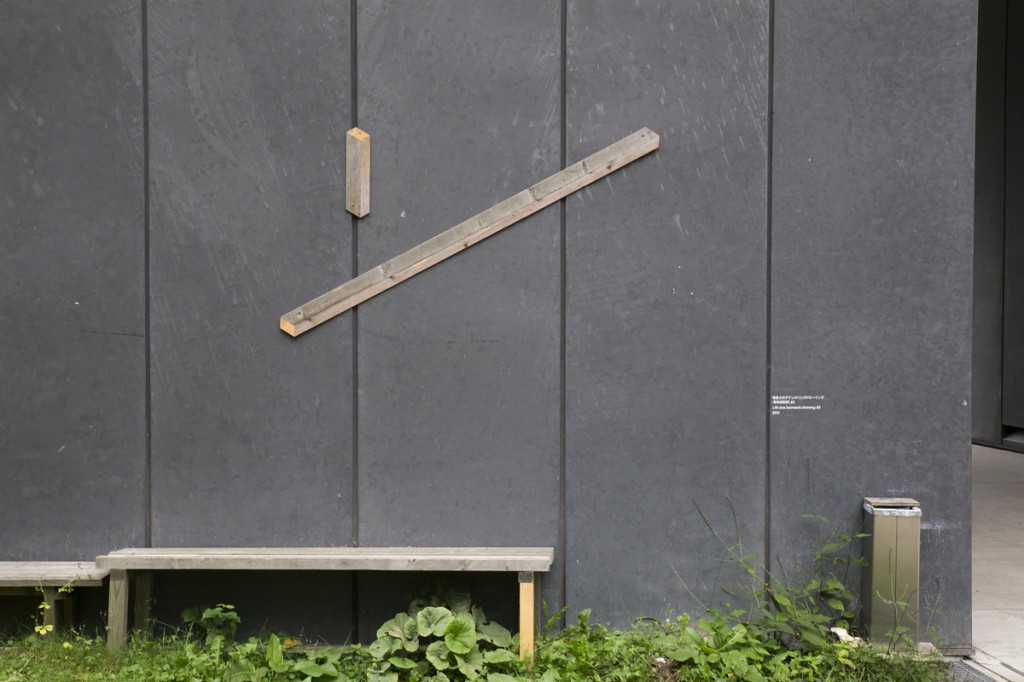 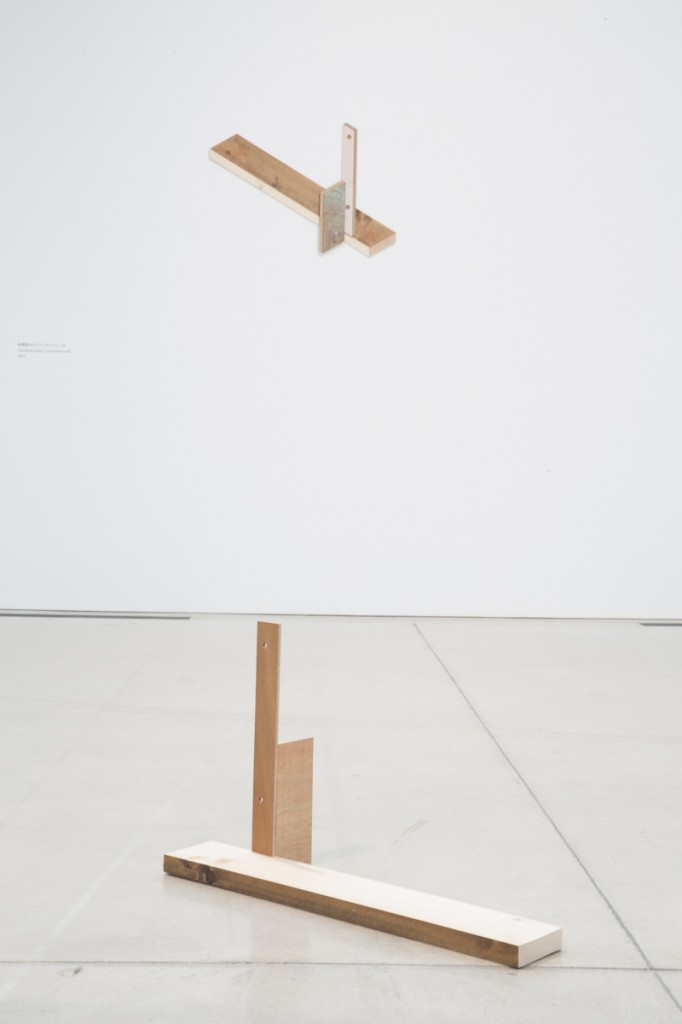 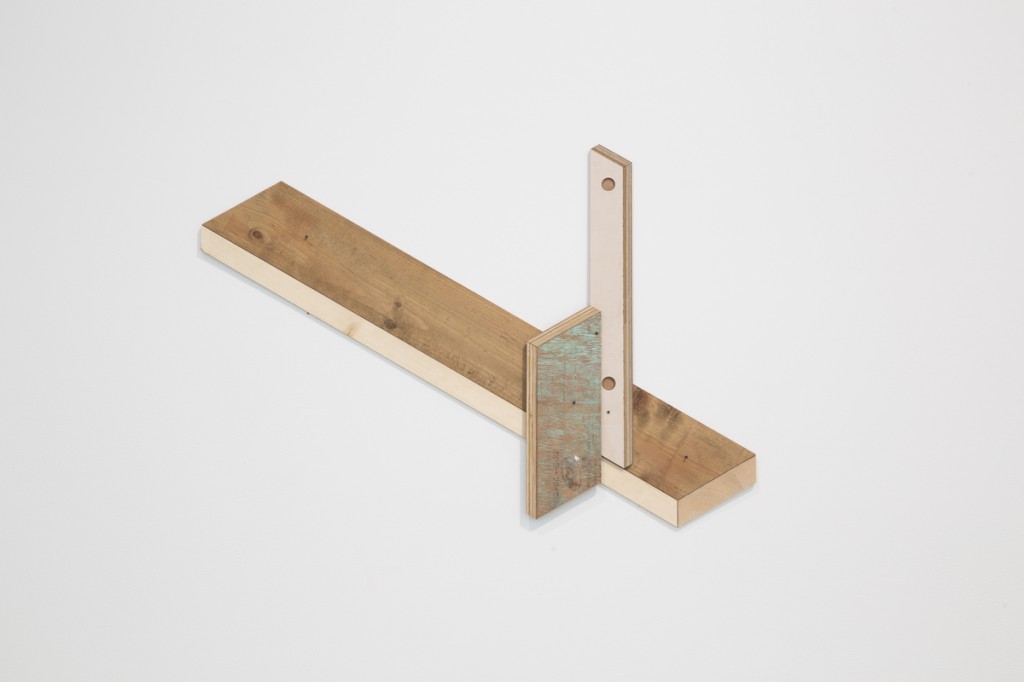 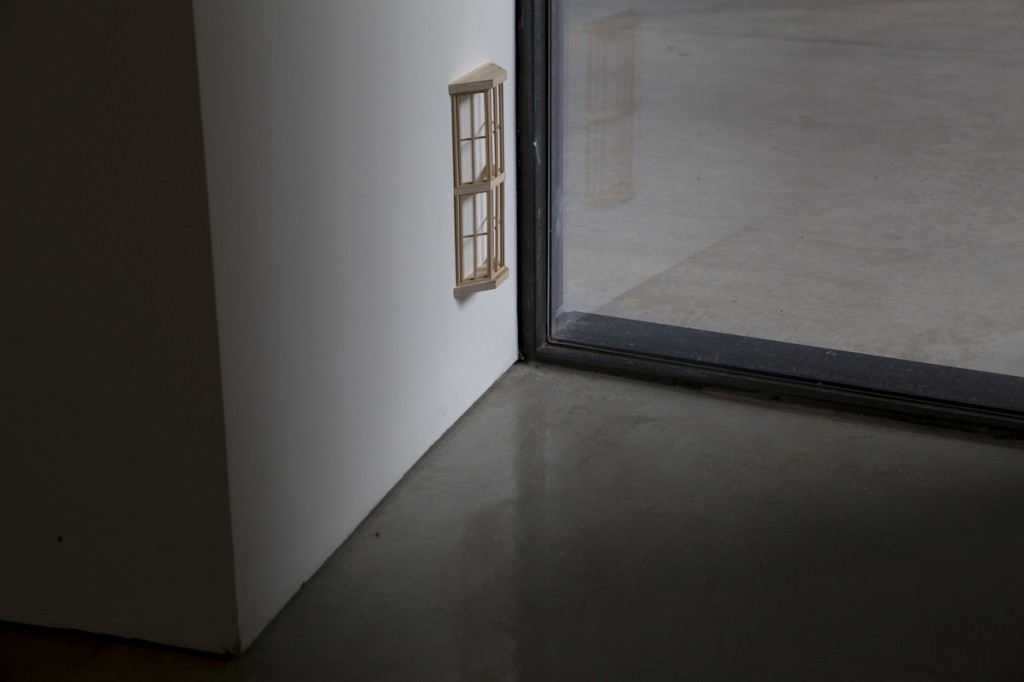 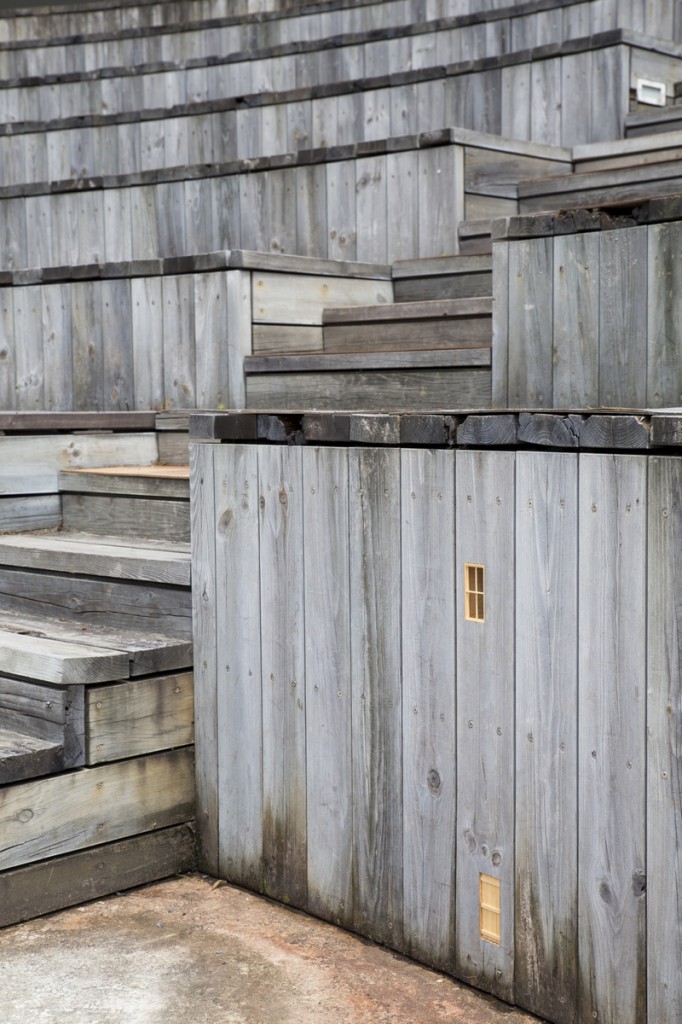 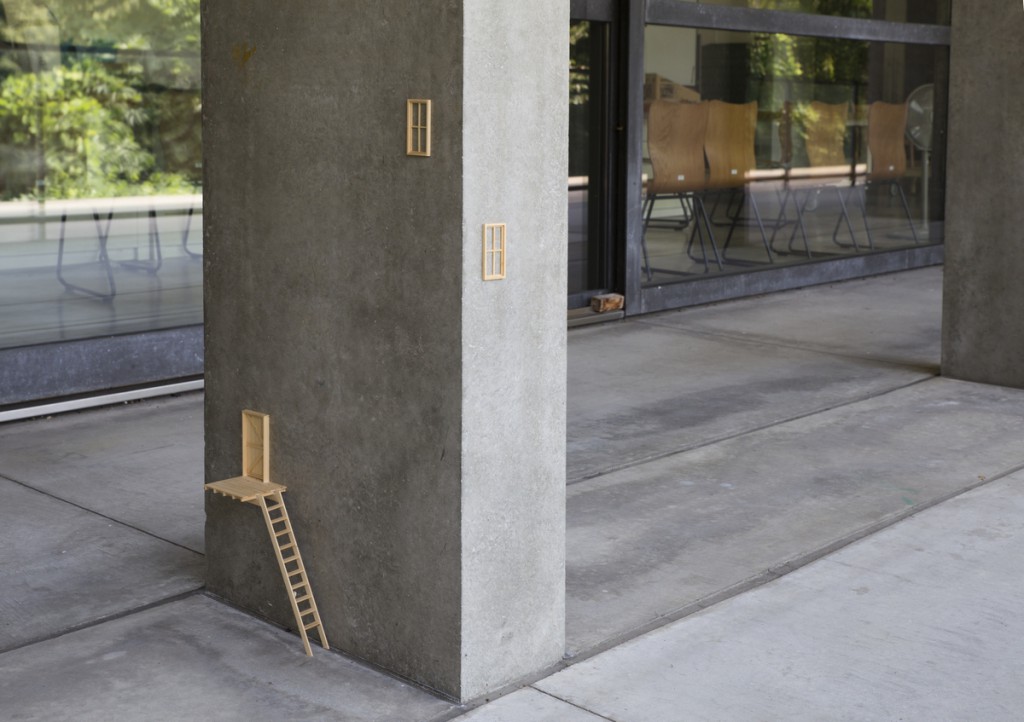 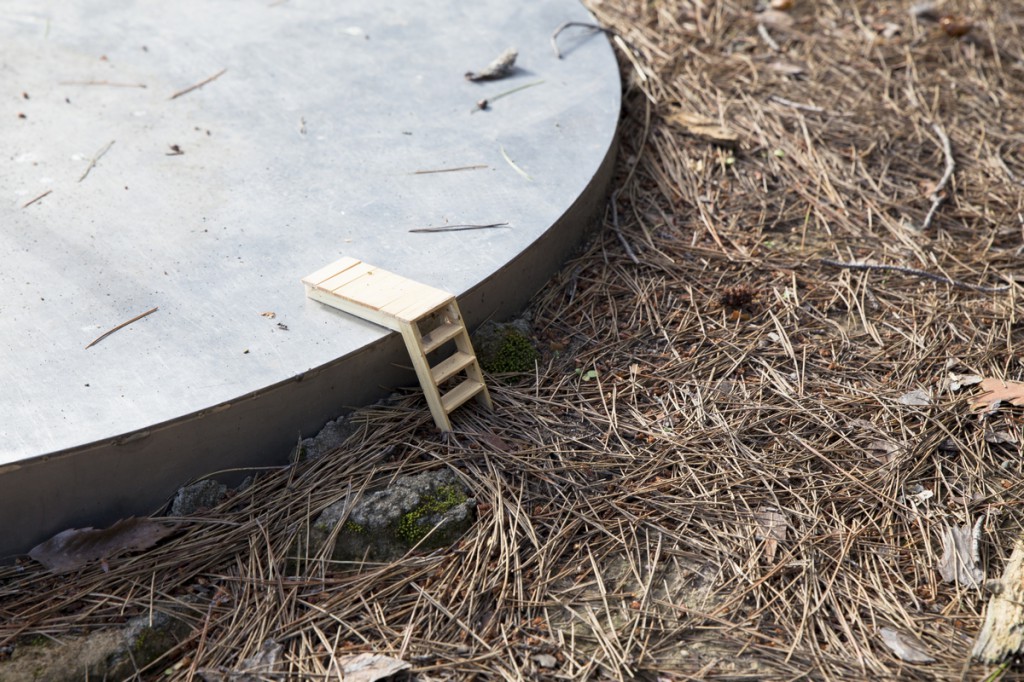 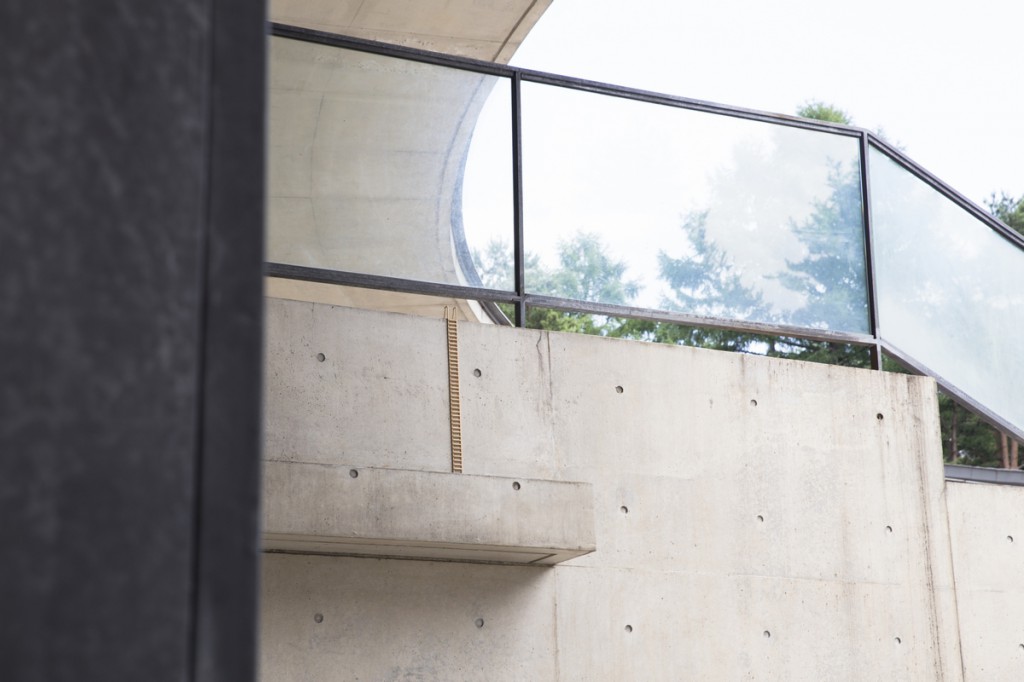 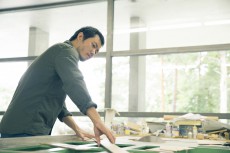 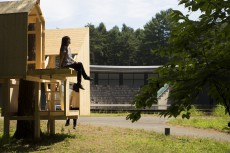 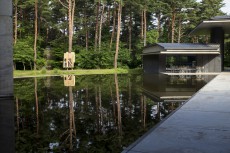 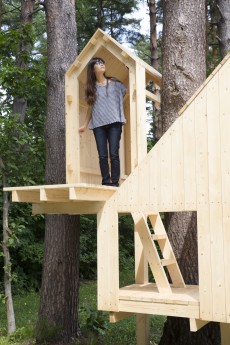 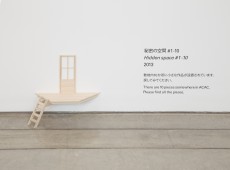 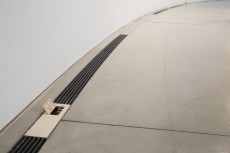 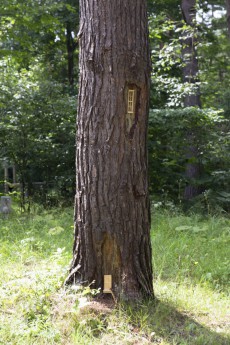 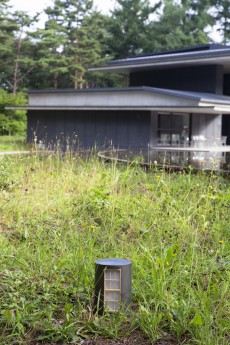 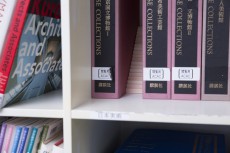 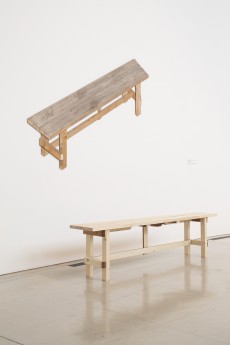 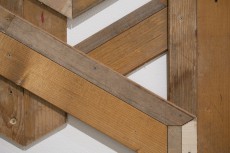