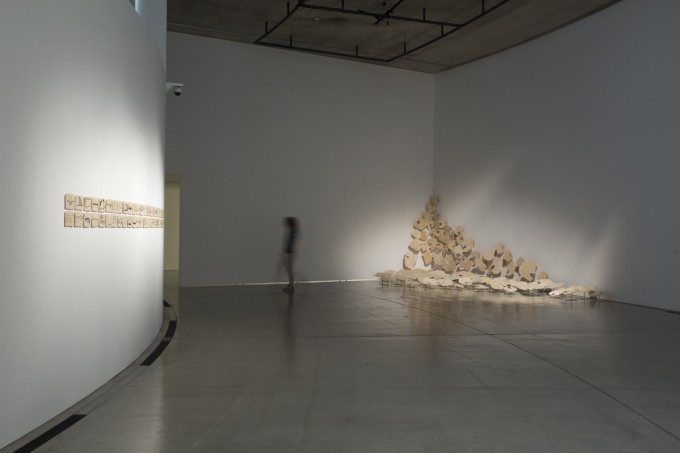 Variations for Daily Life and Creation

In Aomori, the giant butterbur (fuki) is called bakke, and can be seen clustering from spring to summer. Aomori Contemporary Art Centre (ACAC) is in the suburbs and in June when the artists started their residencies, the butterbur were spreading out their verdant, enormous leaves and covering the ground in lush greenery.

The work produced during Manisha PAREKH’s residency reflects a direct response to the things she encountered in the environment of ACAC and Aomori. Shadow Garden takes these bunches of giant butterbur for its motif. Parekh did a drawing of the silhouette of the butterbur’s leaves directly onto a wooden board and then by cutting out two each she could get both the form of what she had drawn and also its mirror image. Onto 100 boards cut out in this way, small holes were drilled in lines as holes “eaten” by insects. Another work, Gratitude, was made up of five parts and used the five Kanji characters for rain, mist, tree, sun, and mountain as motifs to show impressions of the environment. The base was dyed blue, a visual reference to the indigo-dyed kimonos used in pre-modern Aomori, such as in kogin-zashi needlework. These responses did not occur simply because she was producing work during a residency, but through Parekh producing an artwork by consciously assimilating the external factors of the environment in which she frequently finds herself, as well as her impressions and memories of it, or otherwise the elements associated with that place, and then abstracting these through making them into a minimized form.

The Indian contemporary art that is showcased in Japan is often art placed within the context of India's political and social circumstances, and that reflects the traditions of the narratological and the figurative. In fact, assimilating these “Indian elements” codified by countries other than India is surely a strategy within the international art scene. Manisha Parekh, though, is creating artworks that tend towards the reductive and the abstract, against a backdrop of personal memories and the unconscious, and this connects with Nasreen MOHAMEDI (1937-1990), who pursued geometric and abstract forms of expression within the large drifts towards figurative and narrative work in Indian painting.

Parekh’s abstractions are those close to her memories and experiences, and here her own analogical system is functioning. This personal iconography is expressed as multiple artworks or an artwork series that develops organically. For example, exhibited with her new work for this program was Nesting (2011), a drawing work made up of 50 pieces. The drawings were made using ink and gold dyes on handmade paper; they are biomorphic, figurative. It is apparently a work made by Parekh in the period when she was building her own studio. The icons evocative of small cells also occasionally look like floor plans; they are literally her own small universe. They offer glimpses of how she is reflecting the process of “nesting” that is an artist’s studio in a cozy place, presenting a kind of visual diary. Searching for the subject that was her reference is not so important, but we can see the process of production in how she responds sensitively to her surroundings as her attitude towards producing work, assimilating it internally and creating a form.

Nesting is a work made up of a series of drawings; one of the features of Parekh’s work is composing artworks by developing a series in the same method or aggregating similar motifs of forms. This multiplication and repetition is a part of the process whereby Parekh’s external and concrete visual references transform through her internal memory and unconscious; it is used as language for delivering these references in an abstract and reductive form.[i]

The biomorphic configuration of the drawing work transforms richly, a variation based on a single main theme, with one form leading consecutively on to another, as if the overlapping is upholding the artist’s inner depths towards the theme. On the hand, the entirety of Shadow Garden, Animal (2009) (fig. 1) and Seed (2009) (fig. 2) series, and Pomegranate Bloom 1, 2, 3, 4 (2009)—which seems to be a continuation of Shadow Garden—are all composed by repeating a simple form of the smallest unit.

With a supporting post attached to wooden boards cut out in almost the same shape as those in Shadow Garden, the analogous shapes accumulated almost repetitively become multiples by casting a deep shadow from the 100 pieces. On the other hand, this repetition is not a mechanical replication; rather, it is being regarded as a part of the “drawing,” supplementing an intentional difference to the part and the overall. These bare differences born out of the artist’s work by hand on the butterbur board base—what Parekh calls “drill drawing,” lines of holes evocative of bug holes, along with some larger holes, all embedded with knots of silk dyed red—are differences in a repetitive form, as well as the development of a motif.

“Drill drawing,” the act of making these holes, is not a strict procedure nor is it boring mechanically. It is laid out with a kind of improvisation and creativity, conducted through physical responses to the materials and immediate expressive reflections. In how the form made from the material and action manifests itself as the next form, its flow corresponds to the development of drawing. On the other hand, these come out of the simple act of repeating a reduced form, and do not possess the rich transformations or independence that drawings have. Shadow Garden is set up facing the gallery from the floor, extending upward. While on the one hand it evokes the organic seeding of flora and fauna through its form and set-up, more than the physical rhythm of the artist, the overwhelming propagation of plants and animals, these slight differences evoke the reiteration in craftwork as restrained expression and personal exhibiting, conveying a tranquil impression. Discovering this affinity with crafts in Parekh’s work is not only in the presence in the work that gives an impression of being “made by hand,” but is also likely there in how it is made by these kinds of actions.

Crafts are popular in India and Parekh herself respects crafts very much. Crafts intimately related to everyday life possess a common language where they can connect with the world in the techniques of weaving, sewing, and dyeing, in materials, or in the history of their emergence. This probably connects deeply to how Parekh is universalizing everyday matters, personal memory, impressions, and emotions through abstract language, and then creates her artworks.

In Gratitude, indigo dyeing (India is one of the oldest of the major countries with indigo dyeing) and the careful embroidery employed on pre-modern clothing are taken up as craft-like common languages for connecting India and Aomori from this interest Parekh has. The Kanji character motifs are words showing, as content, the natural phenomena to which Parekh has directly responded sympathetically, and on the other hand they are also being dealt with as iconographic and visual experiences. Due to the “drill drawing” along the lines, on the inverted words indigo-dyed so deep they almost seem black at first the words have sunk into the indigo and drilled holes, meaning at first they seem less like characters drawn onto paper than old kimono, acquiring a cloth-like texture. The artworks produced from this craft-esque interest are not in any way being made with the same methods as crafts, but that, through a range of processes, Parekh stumbles on and acquires this textural analogy with crafts surely cannot be merely accidental.

Parekh’s artworks have the impression of extending to the sides and the back. The sides possess a form that extends out physically into the space, for example by multiplying the form of the acquired variations or the repeated form, and while these do not have much depth, they evoke the surface of the everyday or a craft-like handiwork sense of evenness. Simultaneously, the holes, the lines on the drawings, the materials on the two-dimensional works, and the shadows cast by the three-dimensional works and so on all lead one to an immaterial inner depth, and both of these aspects are competing in the artworks. While not a membrane of the true or the false, it is perhaps pointing us towards that thin layer between the ordinary and extra-ordinary, reality and daydream, conscious and unconscious, labor and creation.

***
Photos of the works in ACAC 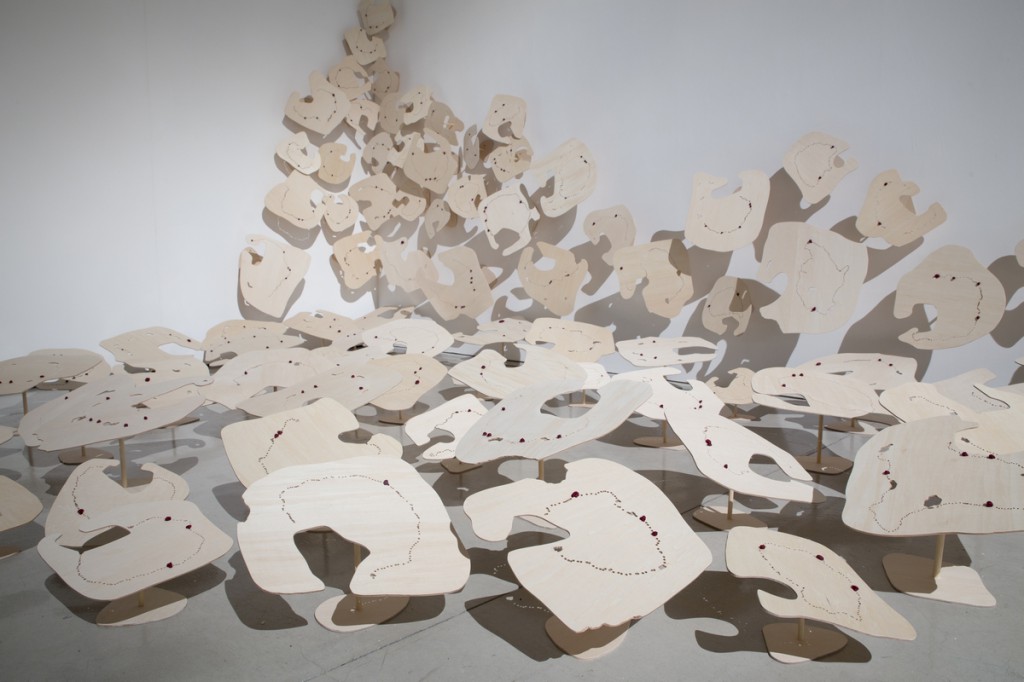 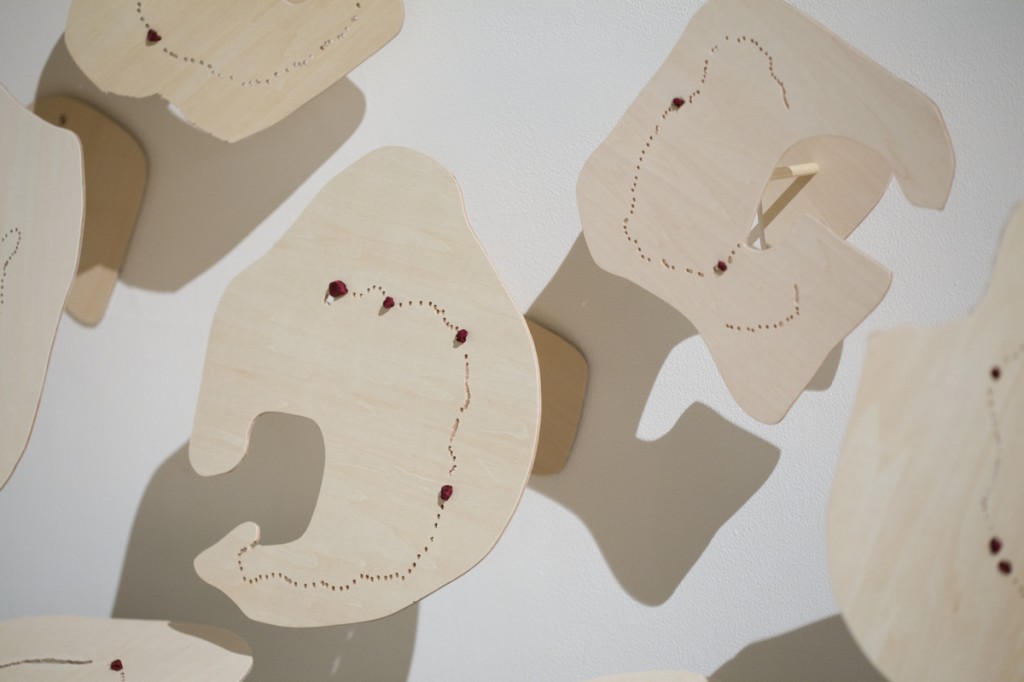 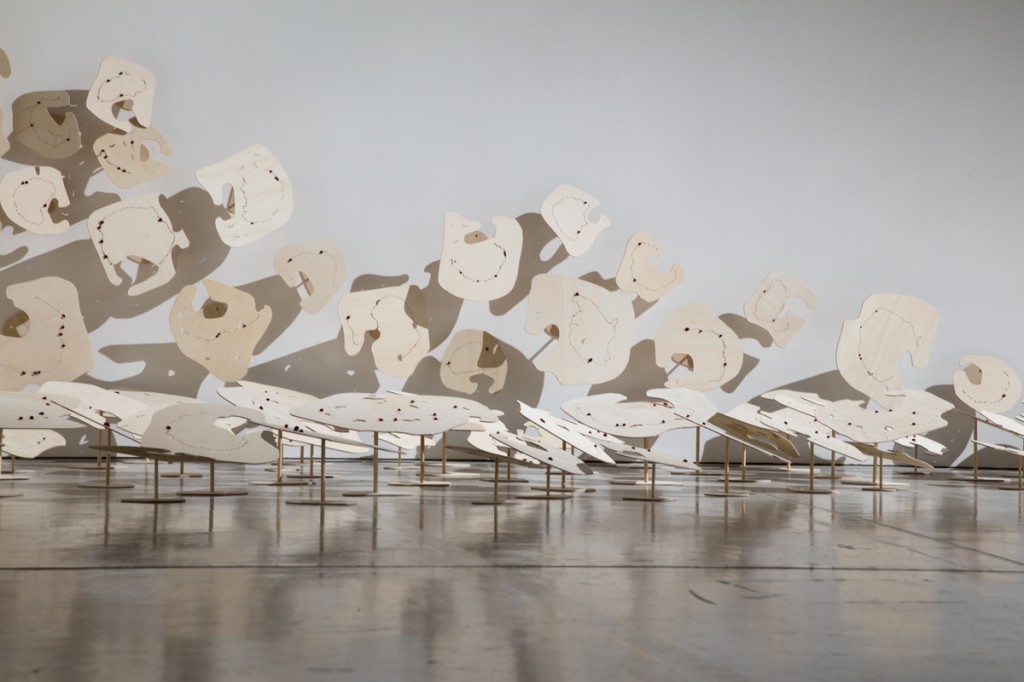 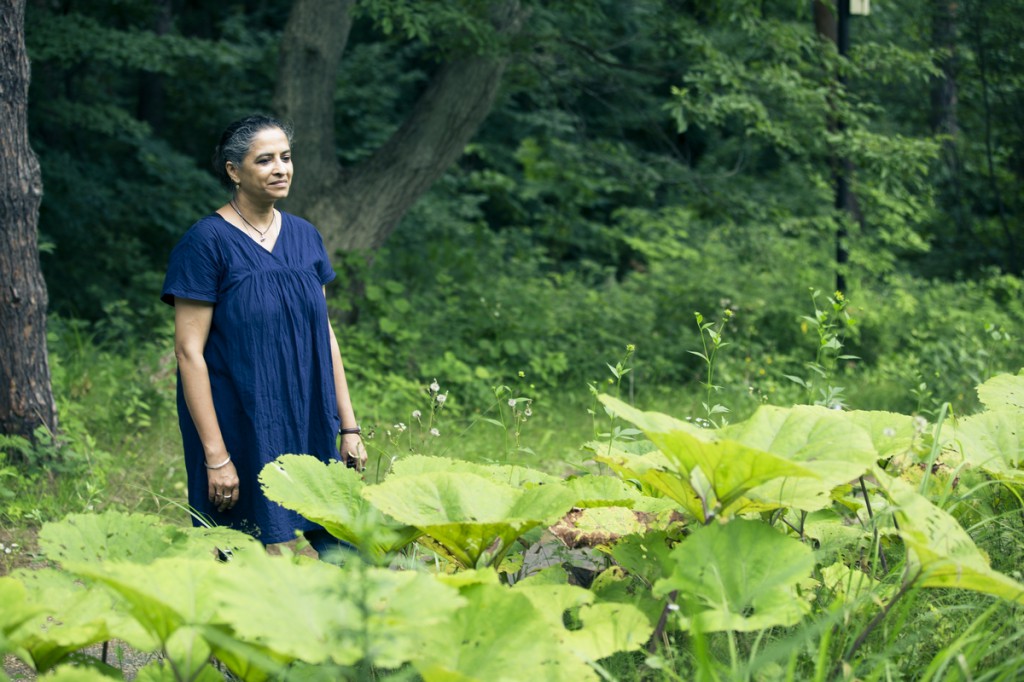 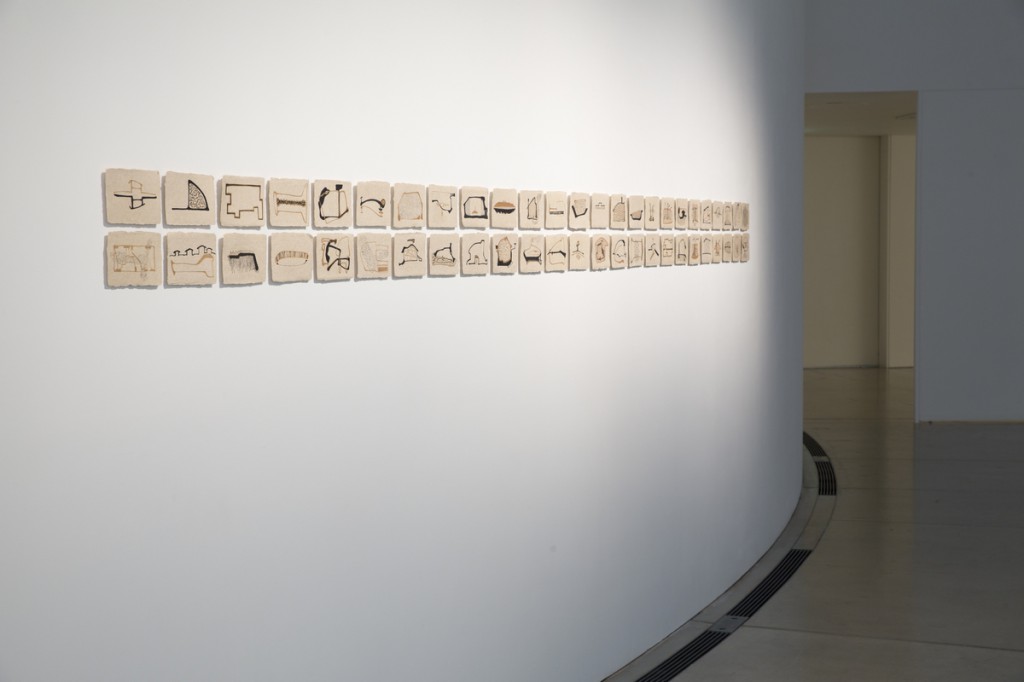 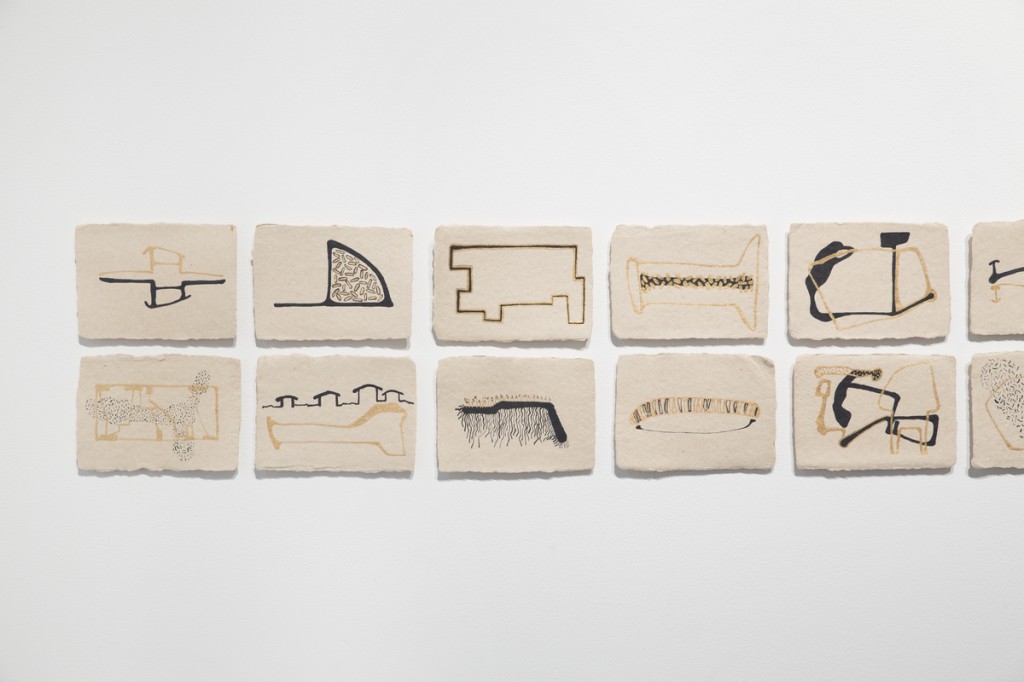 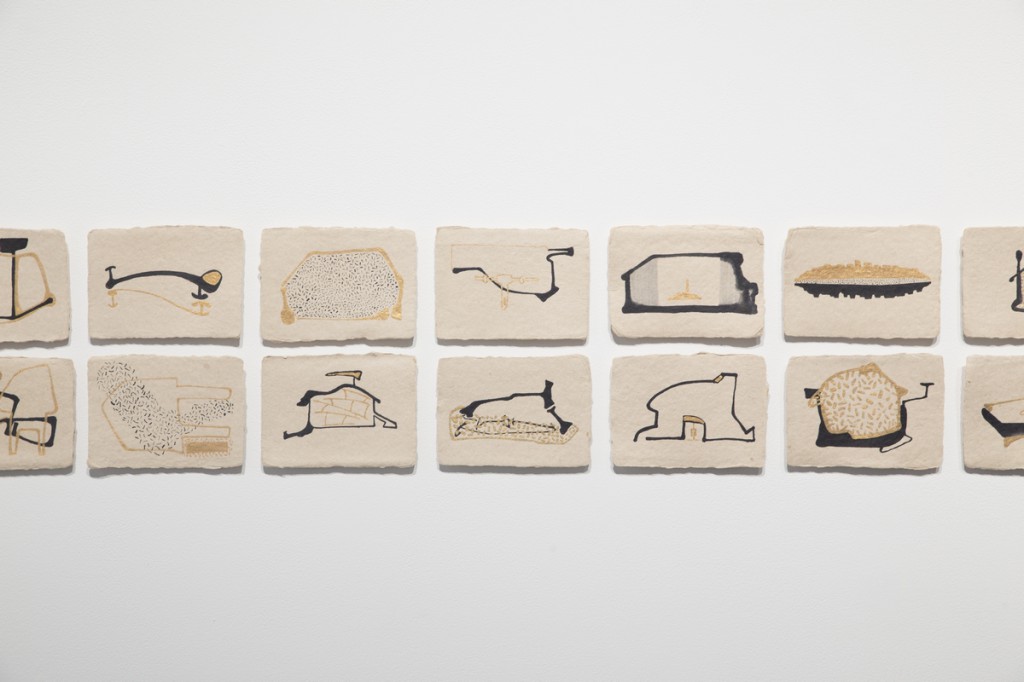 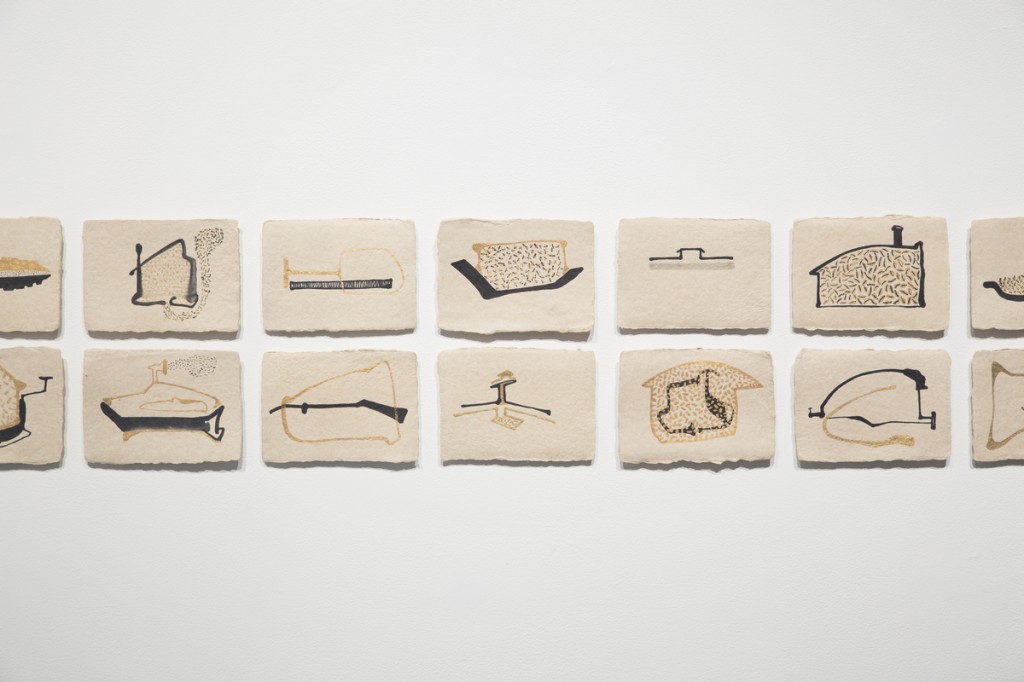 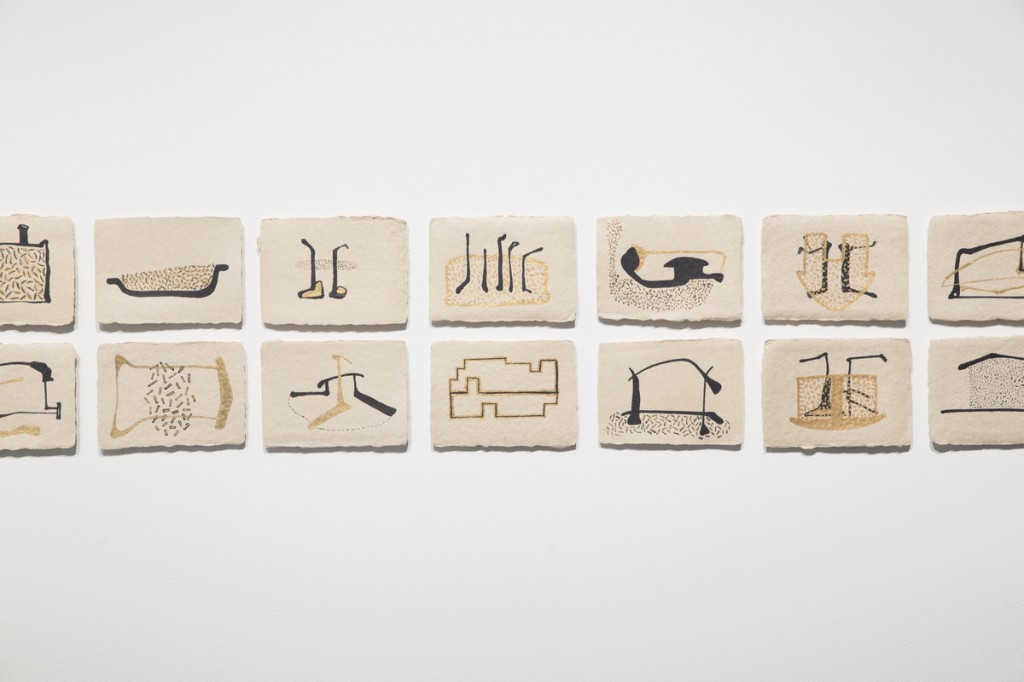 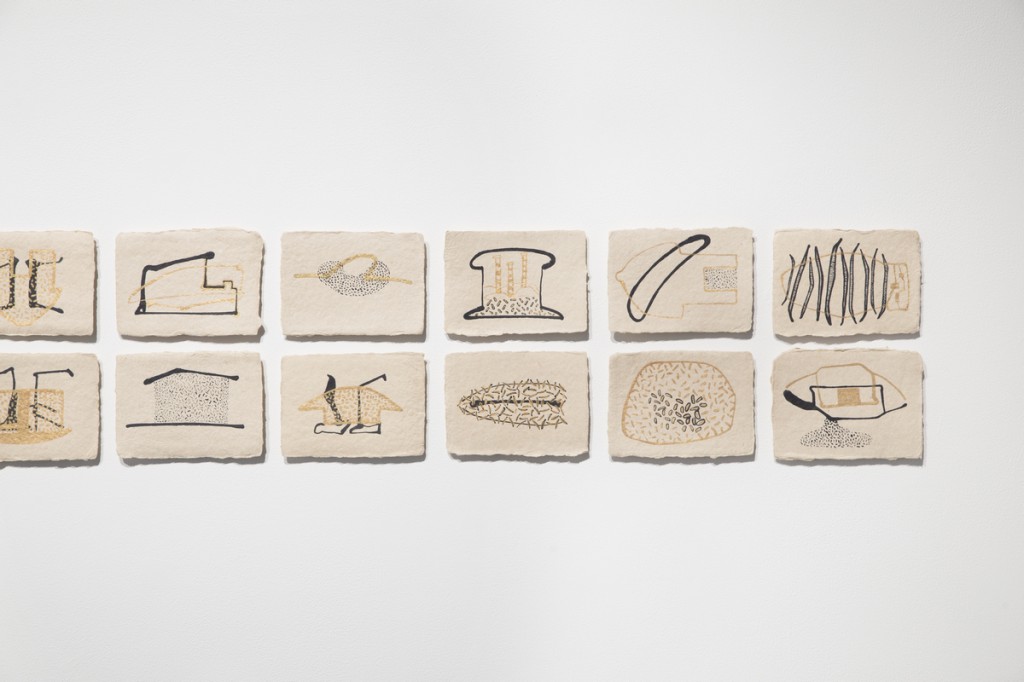 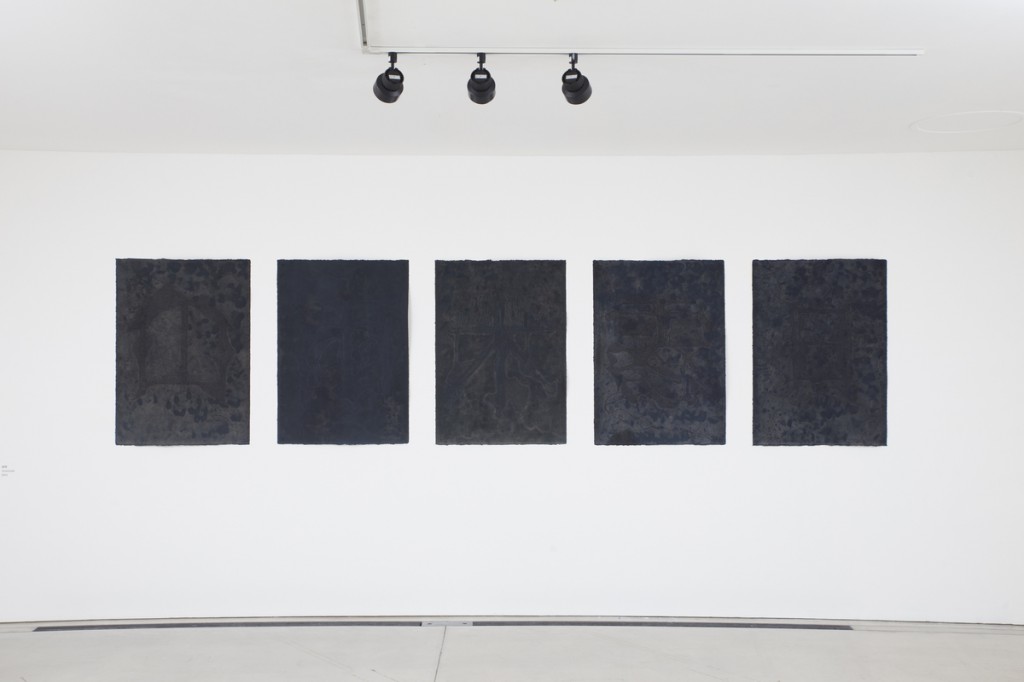 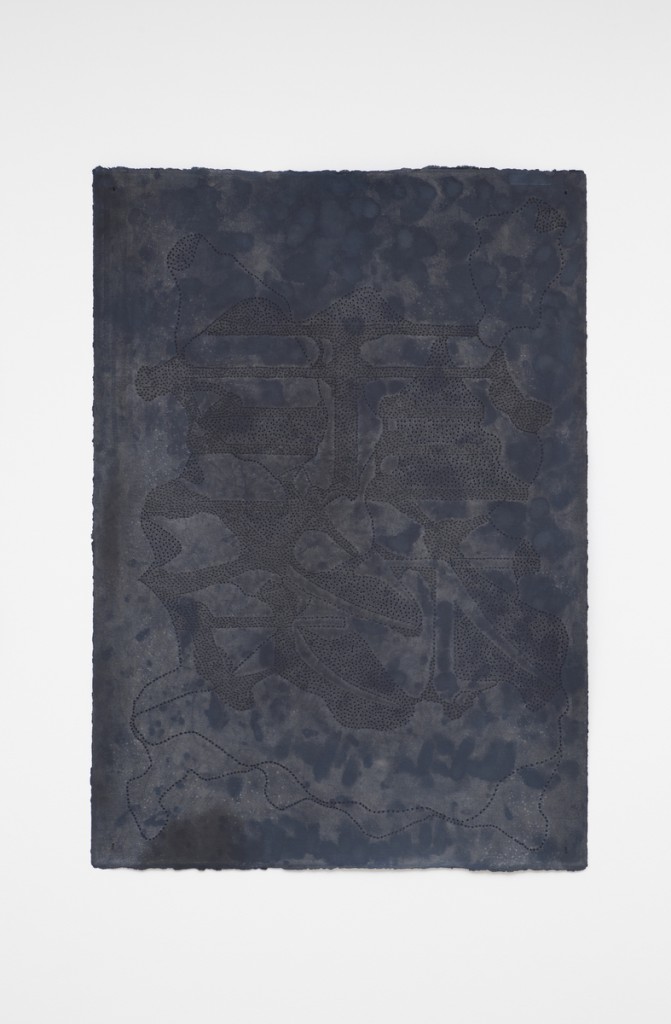 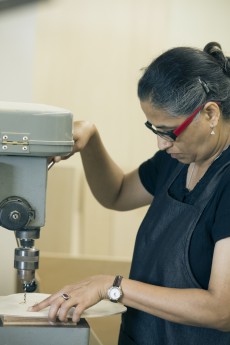 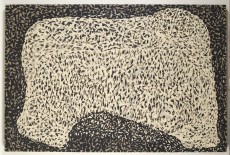 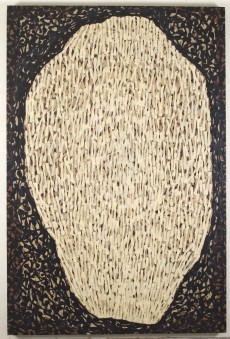 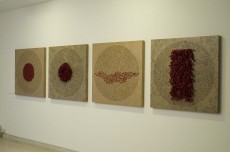