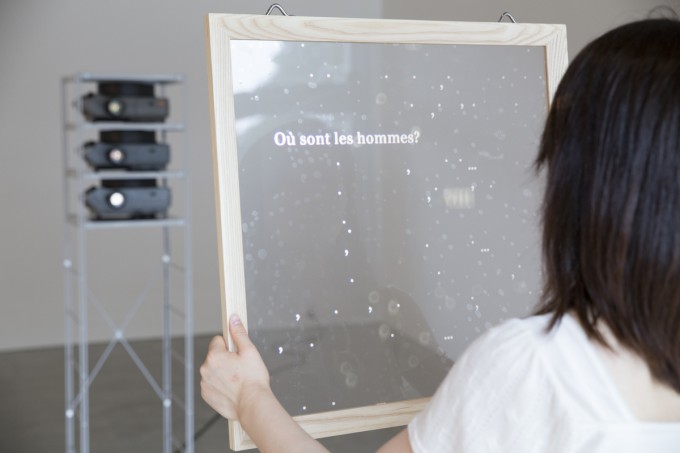 In this exhibition “trans×form”, YAGI Lyota attempted to transcend “form” literally through the production process and artwork itself, though it is generally one of the features seen in Yagi’s artworks. So far he has constructed and exhibited artworks, using ready-made systems and tools, to enable human perception and engineering systems to come out clearly, rather than creating representational expression through artworks. This time he has made an installation combining both new and past artworks together, with a keyword of “Focus” which exists between making and not making a form, in an attempt to further grasp something formless. Each artwork refers to whether being in or out of focus, from five different perspectives; optical one titled Foci—Transparent Forest (2013); perspective Regenbogen (Rainbow) (2006); acoustical Sound Shower (2013); psychological Timer (2005); temporal Focus of Time (2013). Taken altogether, every work pertains to critical thinking on our limited perceptual system or attitude, that is, we only see what we want to see and we only hear what we want to hear.

In the piece titled Foci—Transparent Forest (2013) under the theme of optical focus, three images are projected toward a wide panel of glass by three slide projectors which each have a different distance from the lens to its focus. Nothing can be seen in a bright space with nothing at the back (fig.1), but in holding out a frame with a special sheet of frosted glass in front of those projectors, images can be reflected in it (fig.2). It’s a simple device, but we feel a strange sensation when an image is produced out of space where we assume there is nothing, through our actions. As moving back and forward with the frame, we see the images change depending on the position, owing to each different distance from a lens to its focus, and so images moving within a frame affected by our movement seem like a movie. Here, the usual relationship between a viewer remaining still and moving images changes to the contrary; a moving viewer makes still images move like a movie. It’s very simple, but we realize in fresh wonder the mechanism of movies that optical illusion causes a series of still images to move seemingly. Although slides contained text fragments used in another art piece at the first half of the exhibition, they were changed into landscape photographs in the latter half. There is a connection among the foreground, middle distance and background in the landscape photographs, relating to our visual system to see things in a three-dimensional way with focus giving perspective.

Viewers can appreciate these experience-based artworks through dealing with them in practice, though they are not given careful explanation of how to deal with them. That may not be because Yagi takes completeness for an installation into primary consideration. Through his creation he presents a phenomenon usually considered a matter of course in everyday life by reversing or slightly changing it. Initially we are oblivious to the phenomenon, but once we become aware of it, vast and deep existence like the universe and transcendent time and space, closes in on us. Yagi’s works of art fill us with fresh wonder at the world taken as a matter of course. That is why discovery is an element of his artworks.

However, it does not mean that he only wants thoughtful viewers to understand his artworks. As the introduction to this exhibition, a piece titled Timer (2005) shows itself at the airlock entrance of the gallery (fig.3). An hourglass is put on a device to slightly amplify sound and the viewer can listen to falling sand for five minutes, concentrating their attention on the faint sound that they can hardly tell the difference between surrounding noise and the sound generated from the hourglass. The monotonous sound gets the viewer stupefied, and the last lump of sand plops as if making an exceptional sound that lets them recover their senses. Then the viewer is prepared to see and hear anything after the warming up to guide them toward meeting subtle phenomena. The viewer is now a trained detector, stepping in the gallery where subtle phenomena await him/her.

Such devices are laid here and there. A piece of work installed on the wall near the entrance, Sound Shower (2013), has a small showerhead with a parametric speaker, making a faint hissing sound continuously. Because of its parametric nature, you can only hear the sound clearly when standing under the showerhead (fig.4). Though the sound cannot be literally heard in case you don’t have active attitude toward hearing, the viewer is naturally lead to stand beneath the showerhead, due to the familiarity of this tool, and the faint sound associated with falling water that your sensitive ears barely react to. To get prepared to see and hear anything also means removing psychological limitations that we only hear what we want to hear and we only see what we want to see. That is to say, Yagi makes reference to psychological focus by exhibiting a series of artworks.

Yagi frequently uses text in his works, and the text may be also regarded as being between the visible and the invisible. As for Regenbogen（Rainbow） (2006), passages color-coded in seven colors are segmented and printed with silk-screen printer onto two sheets of glass put in the front/ rear direction (fig.5). Those two sheets coincide with each other when seen at the specific position, and therefore you need a certain distance to see complete sentences. But in case you approach the piece of work with intent to read the contents, letters in a row go all to pieces and cannot be read as a sentence. It’s literally associated with a rainbow, or the way that people behave when viewing a rainbow. The text in this artwork is also part of a German novel about a phenomenon of rainbow, wheich few viewers to the exhibition in Japan can translate. The piece titled Der spiegel im spiegel（The mirror in the mirror） (2005), has a further complicated structure. A mirror makes a right angle with a sheet of glass, and the reversal image is reflected on the mirror (fig.6). The written text can only be read at the specific point where a reversal image reflected on the mirror is reversed again on the very same mirror to make an unreflected image, as the title shows. In this work composed of a sheet of glass, Yagi takes the original text out of a novel with the same title, The mirror in the mirror, written by Michael ENDE, a German author. Although each title of both artworks shows the reference, no further information is revealed and both works have little intention to have a viewer read the text.

Even if you cannot read the text or understand contents, you can still appreciate the artwork. The title of the text, Rainbow or The mirror in the mirror, is poetic and suggestive enough to allow you to grasp the whole intention of the artwork. On the other hand, what if you could read the text and understand the content from the beginning? You might be lead to an in-depth interpretation through connecting the words with the artwork. Or the content of the text might draw you to a lyrical reading. But these are probably not the intention of the artist. Yagi says he is not so interested in representing something or composing a base for contents[１]. Those are just parts of materials to reveal a certain situation, and his artwork is intended only to develop phenomena. But in effect, the content of the text matches the artwork. Speaking about Foci (2013), at the beginning he used slides that show a passage used in another artwork[２]. There are, on each slide, several original sentences extracted from The Little Prince written by Saint-Exupéry and marks such as periods and commas selected from the passage, and so meaning of the text is harder to read (fig.7). As these periods and commas seem like stars, the artwork was titled Foci—Sieve of Stars at the beginning. While moving back and forward with a frame in front of the projectors, it feels like you are seeing three-dimensional outer space emerging from nothing. But, if you notice where the sentences are taken from, you will not only find connection with the star, but also spontaneously associate the artwork with words that the fox gave the prince when they separated; what is essential is invisible to the eye.

Thus lyricism and a story line are excluded carefully, but there is something romantic and representational about his artworks. This would be because all the components of artworks are dealt with metaphorically, like the case that the text matches the artwork even if a viewer cannot read it. For example, Yagi often uses obsolete media such as a disk record and cassette tape for his artworks. Of course including a slide projector, this media converts recorded sounds or videos into physical things like tape, groove or film. Whether groove or film, there is also traces stored inside of a past recorded. Using such media in his works strongly suggest the past stored inside, through being deprived of almost everything except playback function.

Yagi creates devices generating invisible phenomena with all things concealing symbolic meanings, like a sheet of glass, an hourglass, a frame, a piece of ice as well as recording media. The beautiful devices stir our primordial senses using contemporary things, and allow us to see the world in fresh wonder.
(Translated by Nishio Sakiko & Joe MARDELL)

Photos of the works made in ACAC 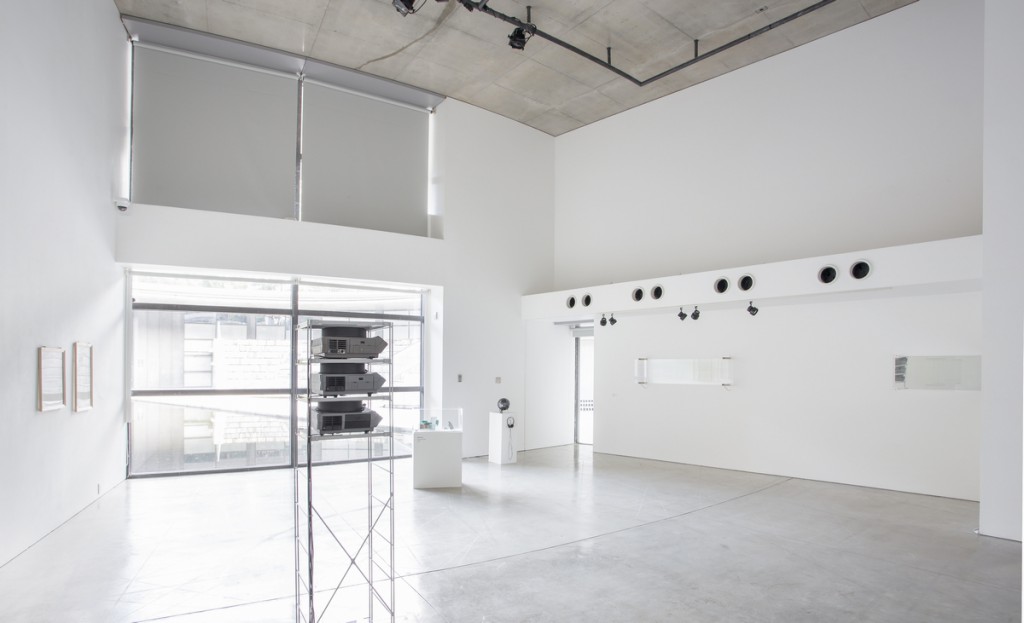 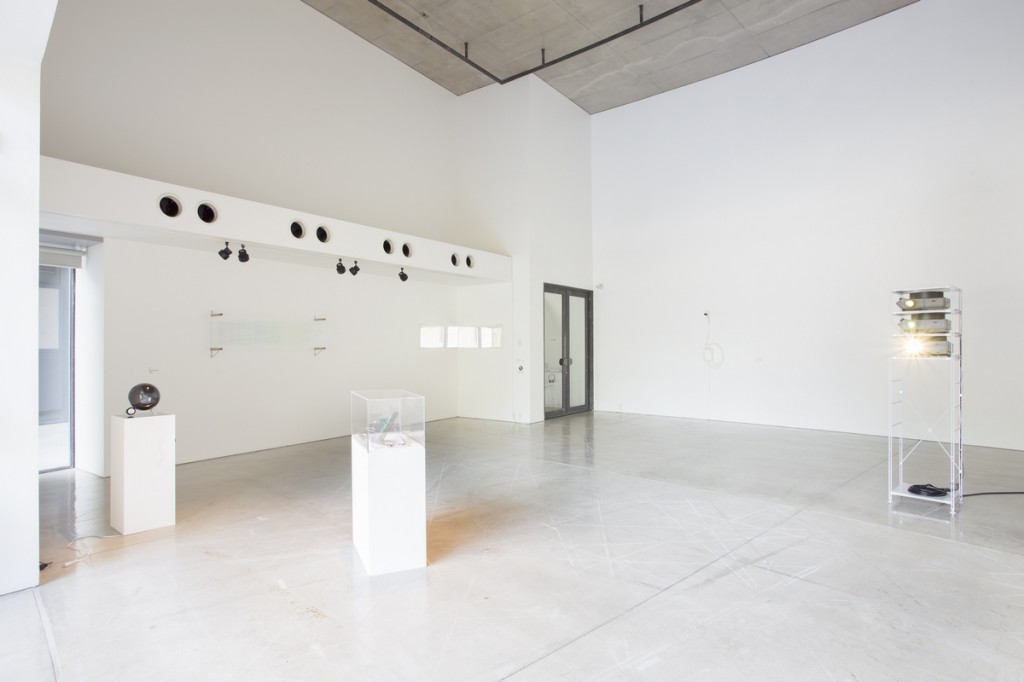 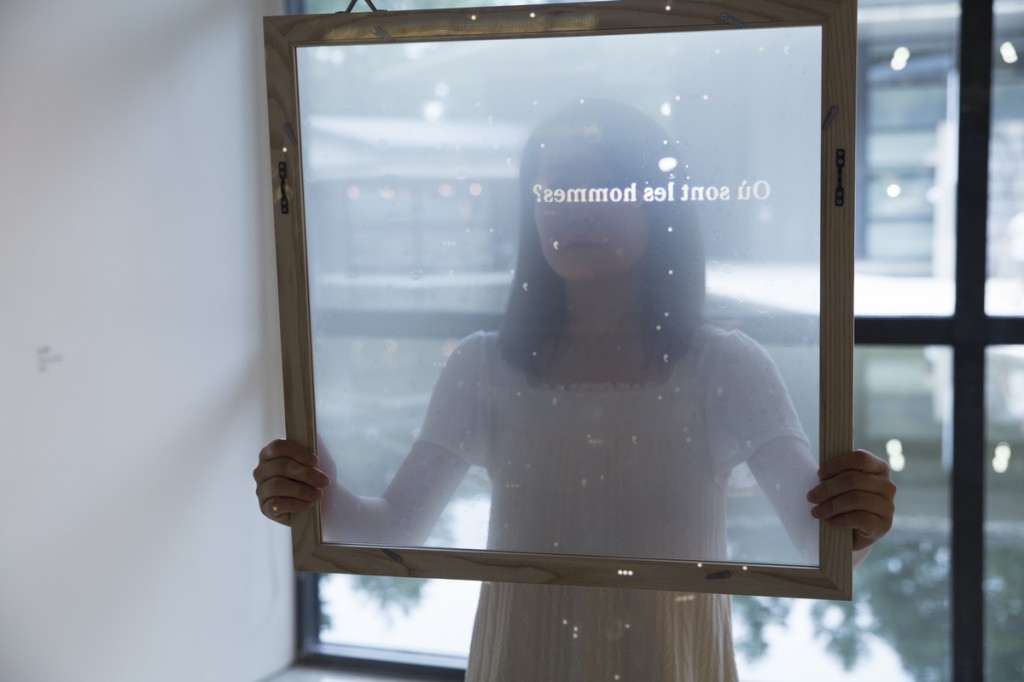 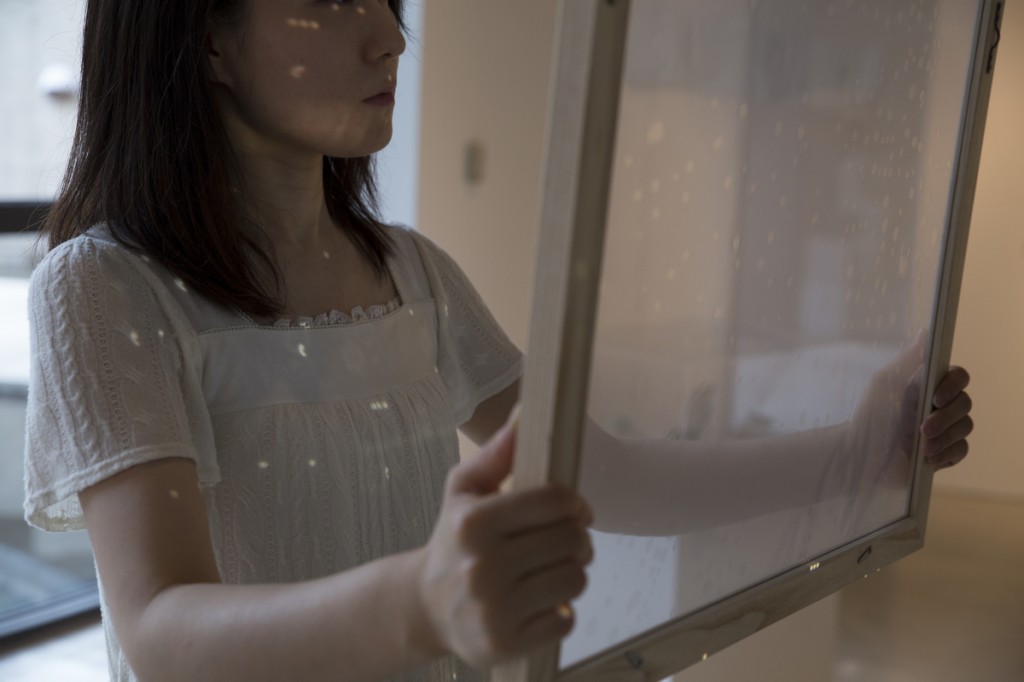 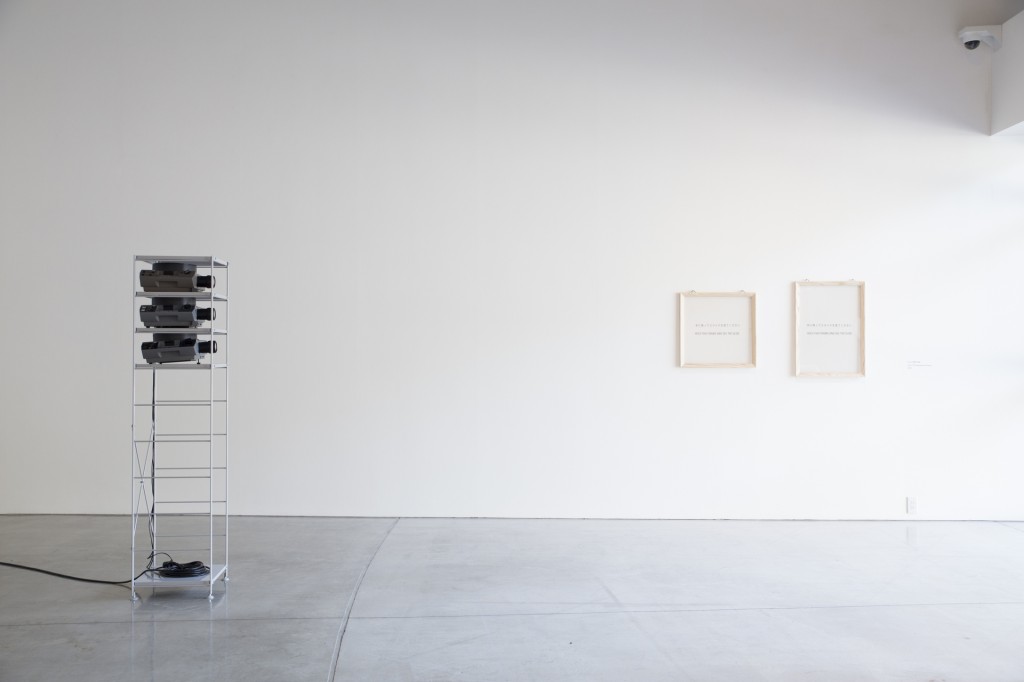 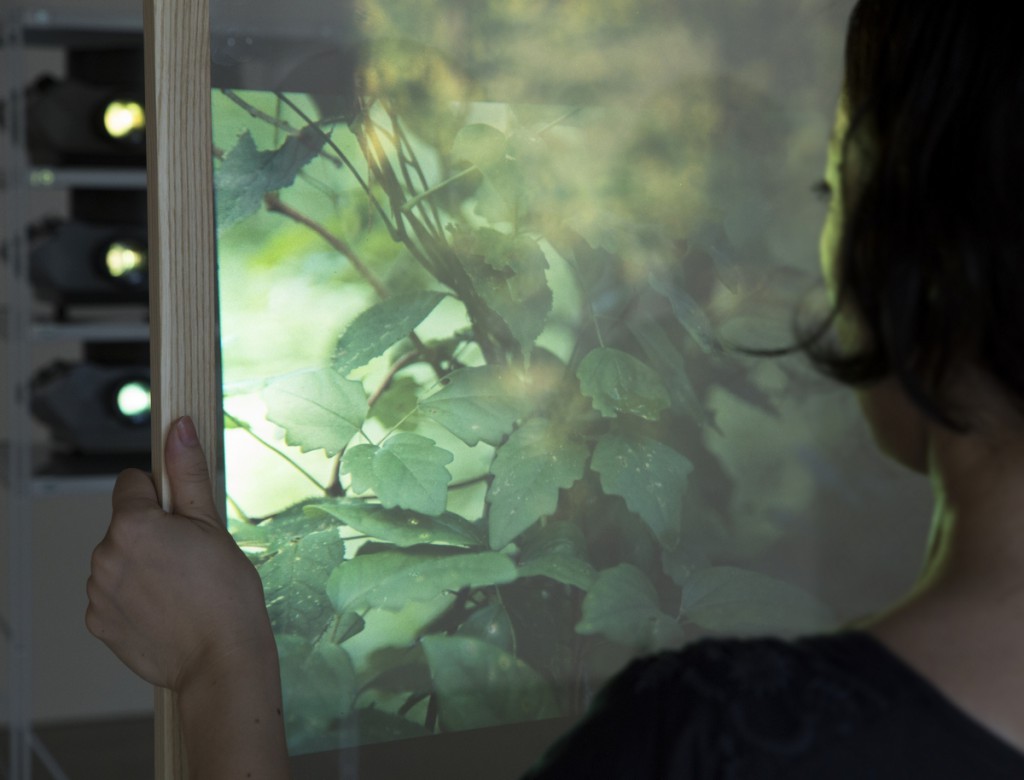 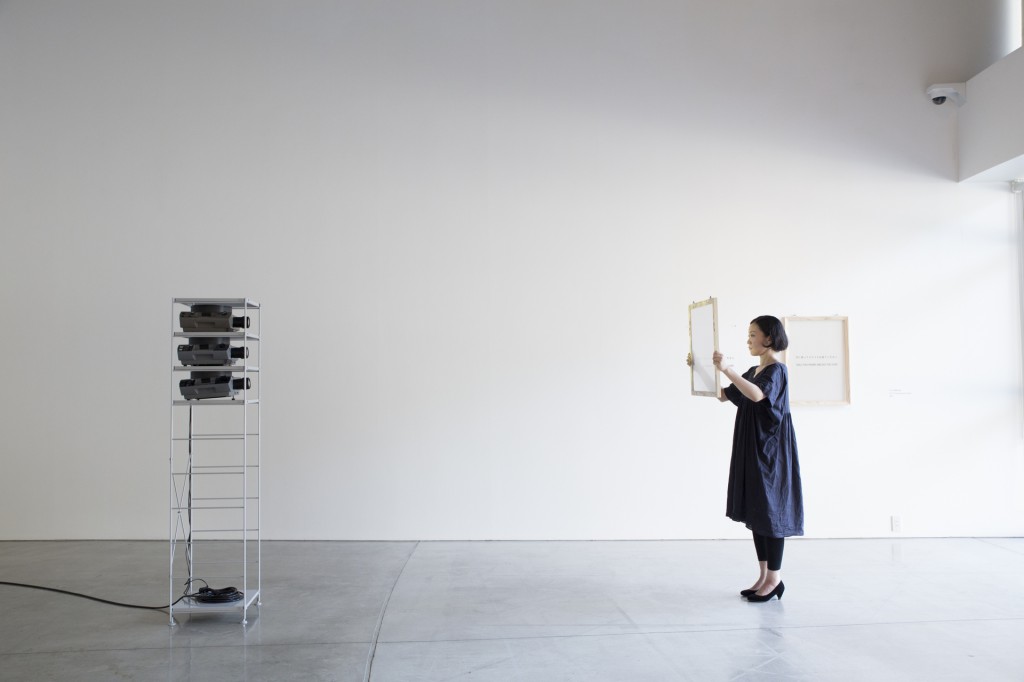 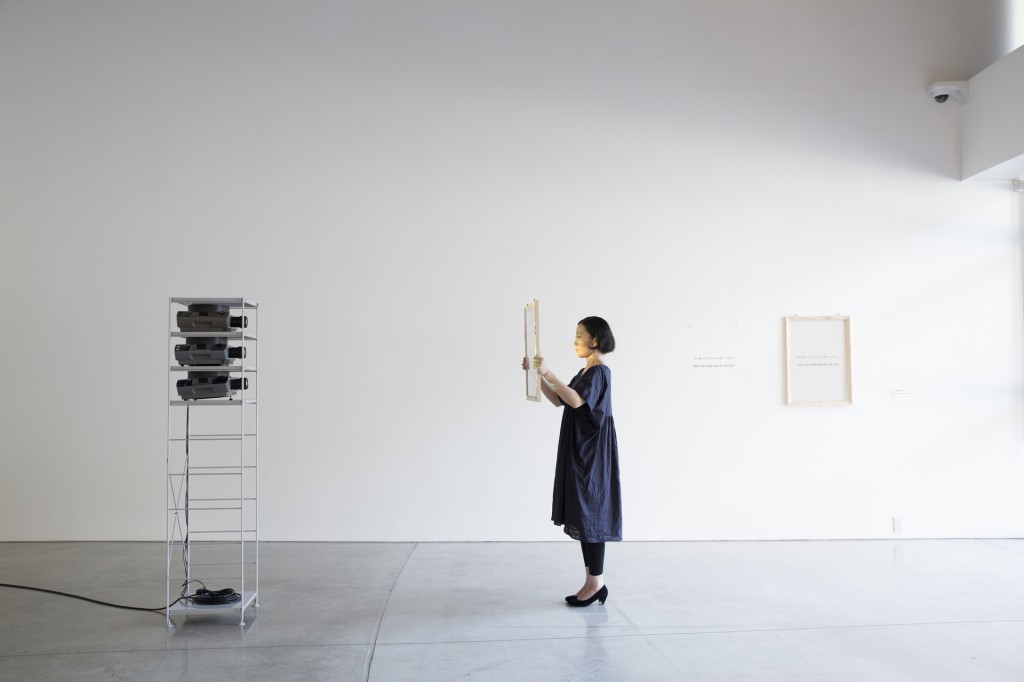 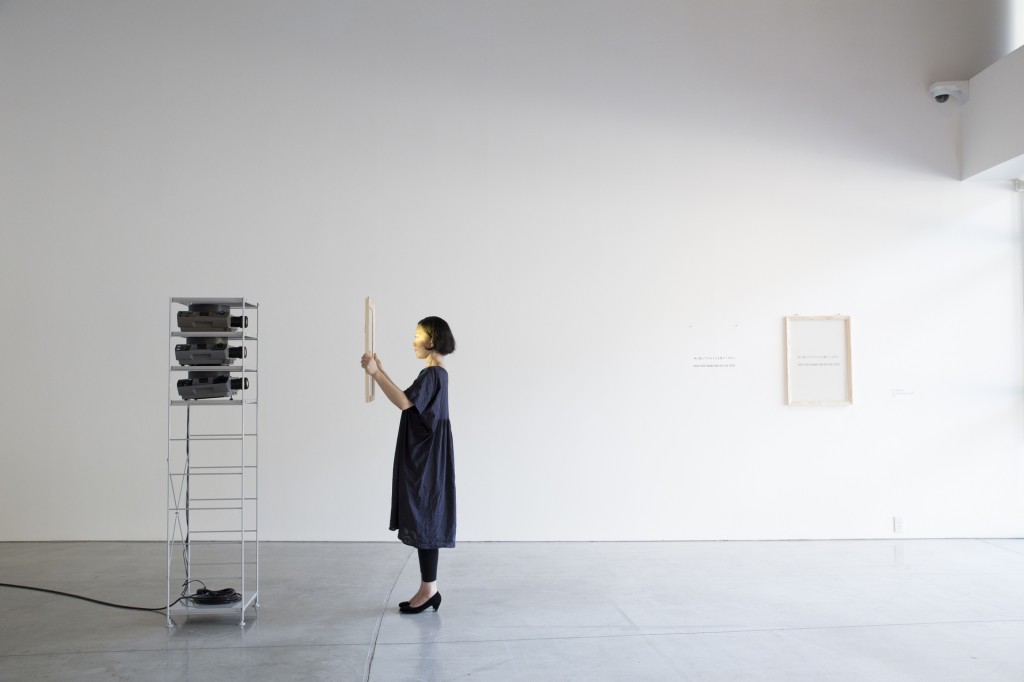 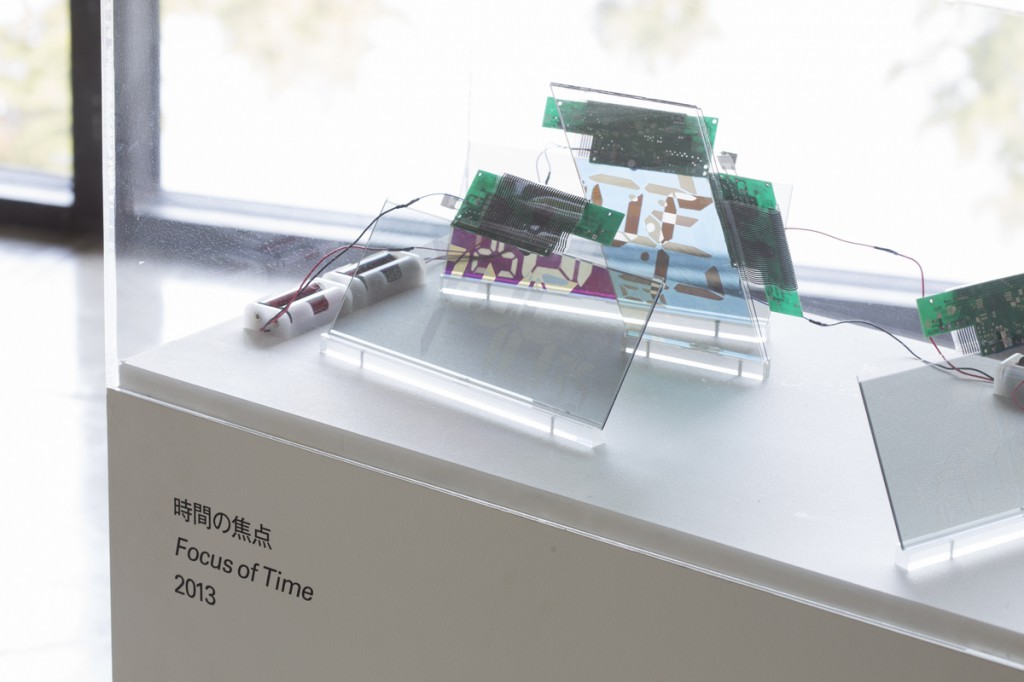 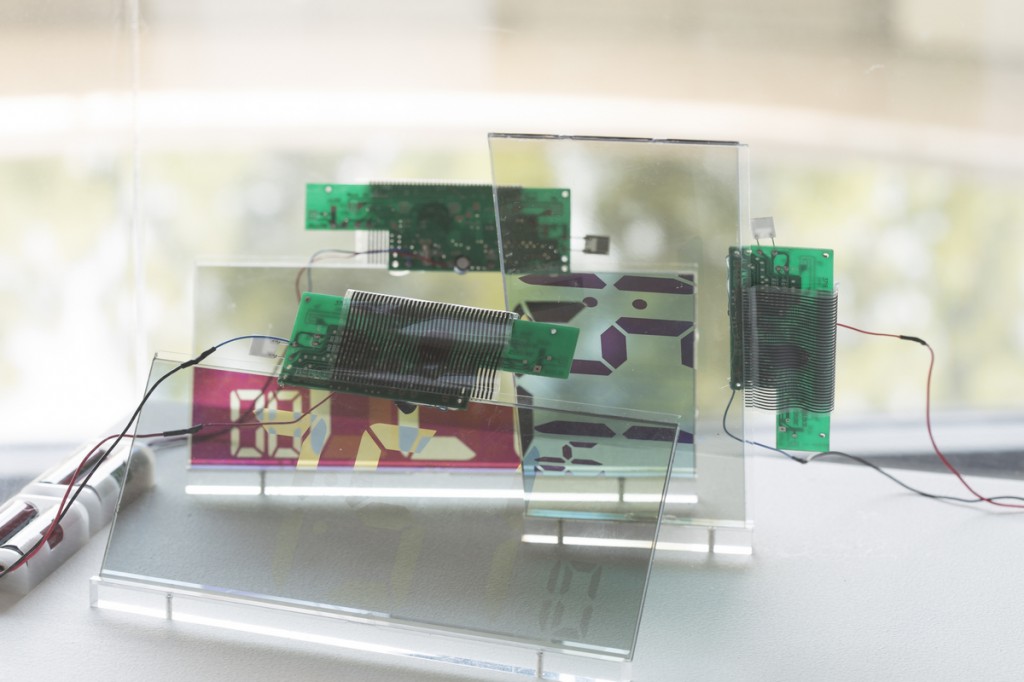 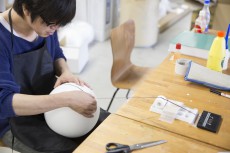 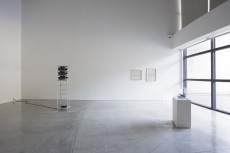 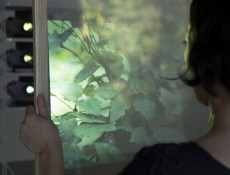 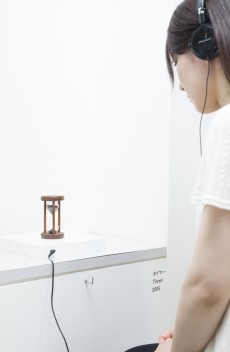 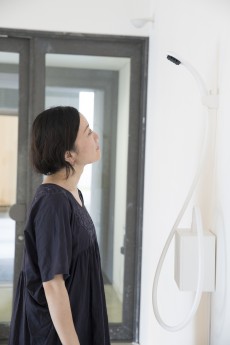 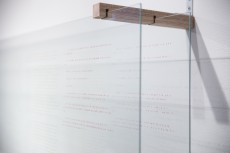 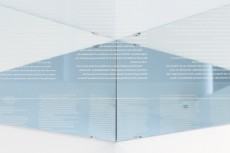 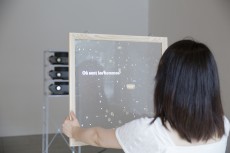