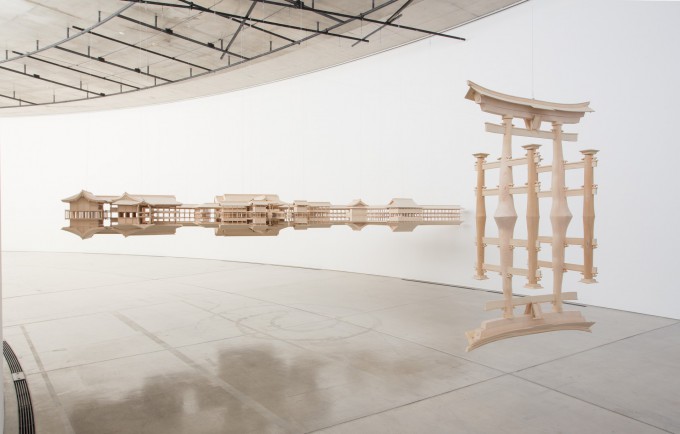 Opening the door to the utopia beyond

IWASAKI Takahiro was born and is currently based in Hiroshima. Without being fully aware of it at the time, he grew up with an admiration for his father, who ran his own cake shop business.[i] Intent on building an independent life for himself, he resolutely set out to become an artist. He studied design at university but found client-oriented work restricting, so he decided to turn the models he was then frequently making into works of art themselves. He chose the Golden Pavilion as the subject of his graduate school final project in 2001, and his Reflection Model series began with an elaborate wooden recreation of the pavilion and its reflection in the water (fig. 1). His next model was of Byodoin Temple’s Phoenix Hall (fig. 2). During the Aomori residency program, Iwasaki devoted himself to a third reflection model, this time focusing on Itsukushima Shrine, which floats on the sea surrounding Miyajima Island in his native Hiroshima Prefecture (fig. 3).

Iwasaki had never before put the creative process for the Reflection Model series on view and, since he could not complete it with an entirely open creation process in the roughly two months until the exhibition began, he only presented the Itsukushima Shrine model in stages as a work-in-progress once parts had reached a certain level of completion.[ii] At the opening, only the Main Pavilion’s Main Sanctuary and Hall of Worship were on display, suspended independently from the ceiling (fig. 3). By August 20th, roughly one month later, the Main Pavilion was complete, and the Main Sanctuary, the Hall of Worship, and the Purification Hall were joined together (fig. 4). On September 12th, four days before the final day of the exhibition, the High Stage, the West-end Wooden Deck, the Music Hall, and the Kadomarodo Shrine at the front of the Purification Hall were finished and attached to the main structure with the corridor that links them (fig. 5). While these were the only segments on display during the exhibition, on September 24th, just before the start of the setup for the next show, the West and East Corridors were added and displayed for one day to students and other volunteers who assisted in the model’s production (fig. 6). With the addition of these two corridors, Iwasaki’s recreation of the horizon-spanning Itsukushima Shrine at last appeared in its full form.

This method of exhibiting segments of the model in the order of when they could be displayed began as a matter of necessity since Iwasaki was unable to present the entire model immediately. Ultimately, however, this approach made for the kind of fascinating exhibition only an artist-in-residence can offer, providing a glimpse into the process and behind-the-scenes usually seen only by an artwork’s creator. For instance, the separation of the Main Pavilion’s two major buildings left the model’s empty interior exposed for the month or so after the exhibition opened; with only the exterior recreated in detail and the structure built to be as light as possible, the hollow interior emanated a strange ambiance in its exposed state. The framework of the shrine became clear once the three main buildings were connected in the second stage of the exhibition, but until then the absence of the expansive horizontal corridors, combined with the ability to view the entire structure at once, made it appear strikingly different to the actual Itsukushima Shrine. The sense of scale and spatial depth changed dramatically once the East and West Corridors were added, as until then the work was recognizable only as an architectural model. Now a full landscape appeared, the entire exhibition environment drawing the viewer in as a single space so it could be experienced as a sequence of works.

The works in the Reflection Model series are made with extreme precision, and yet one of their major trademarks is that they are built by a method differing entirely from that of architectural models. Architectural models are created as studies of a building’s total design, including its structure and scale, and are constructed according to a blueprint. Rather than depicting a detailed blueprint, Iwasaki instead collects simplified floor plans, elevation views, and photographs from illustrated reference books, and by synthesizing them produces a complete image out of conjoined segments of the recognizable building’s exterior. Iwasaki refers to this approach as “faithfulness only to the surface.” He leaves the interior almost entirely hollow so he can concentrate just on reproducing the façade exactly. Rather than using precise blueprints to build perfect architectural models, he creates his works while using his imagination for the parts he does not know, based on information he has obtained. This element of the process is extremely important—by envisioning the unseen parts of buildings according to the peripheral information, everything can be fitted together, building up a separate architecture with a distinct logic.

Conventional architecture focuses on structural logic, as seen in practices such as the extension of a single pillar from the floor to the ceiling. In contrast, a close look at Iwasaki’s models reveals their pillars to be separated above and below the floors. Severing beams and pillars at their intersecting points lessens their structural roles. While Iwasaki’s models exhaustively reproduce the exterior even down to the Japanese-style roofs, this is not for structural purposes, but everything is realized in an ornamental way.

Iwasaki built his models by retracing the ideas of our ancestors who created these works of architecture on water. He creatively interpreted these predecessors’ designs that realized architecture on the water as landscapes that depicted not only beautiful buildings but also, by gazing at the mirror images, the vertical orientation disappears, forming visions of utopia floating in mid-air and freed from gravity. He achieved these ideal scenes through unique transformations of architectural logic and structure.

The Reflection Model series expresses respect for the imaginations of people long ago who overcame numerous hardships to build on top of the water, an attempt to recreate the landscape of utopia within their own minds by gazing at architecture that floats on the surface of water. Iwasaki’s models seem to capture these visions of utopia in miniature.

I would like now to look at another of Iwasaki’s representative series. Until 2005, Iwasaki had been studying in Edinburgh, where high prices prevented him from buying all of the art supplies he desired. As a result he pursued art he could create and display regardless of such external factors, and began using common items and trash as materials in his works. He learned to find order in the chaos of trash, envisioning an actual mountain ridge in a mountain of laundry and the shape of streetlights in the frayed threads of jackets. With an ultra-vivid filter on the everyday, he developed an artistic approach based on transformations of perception and scale.[iii] This approach culminated in the extremely delicate structures made of towel threads in his Out of Disorder series (fig. 7). From there he developed his current style through a process of trial and error.

In 2006 and 2007, Iwasaki worked as an assistant professor at Hiroshima City University, his alma mater. Along with students and the professor and artist YANAGI Yukinori, he launched the Hiroshima Art Project[iv] and as part of this curated the exhibition Trash Becomes Art! Super High-Quality Dust at the site of a former waste incinerator plant (fig. 8). This exhibition strongly reflected Iwasaki’s message as an artist. Presenting works by 23 individuals and groups made from readily available and inexpensive items or trash, it brought new value to the waste plant by integrating the works into the site as it was. Many of the works could only be spotted with close attention, which stimulated the imagination and sharpened the observational skills of the viewer.

It is difficult to identify obvious similarities between the works of Reflection Model and Out of Disorder. However, we can say that both series use materials and methods just slightly different from those common to everyday life to transform ordinary scenes into alternate worlds resembling supremely beautiful and delicate forms of utopia. Using delicate materials such as thread and mechanical pencil lead to recreate electricity towers, telephone poles, and other familiar structures that play supportive roles in our lives, Out of Disorder grants these objects a beauty and intensity inherent in their fragility. These works draw our powers of perception into miniaturized worlds in which unremarkable peripheral scenes are transformed from the quotidian into the utopian. On the other hand, the Reflection Model series offers a paradoxical take on gravity as a force indispensable to architecture, and by recreating water-reflected images as actual ones and presenting structures that can only exist in mid-air, it frees architecture from gravity and creates an otherworldly scene floating in space. Through these works Iwasaki is opening the door to the utopia of the not-so-distant future. These revelationary works take us from trash and everyday items that seem to have no great existential value into utopia, allowing us to realize that the utopia we long for but cannot seem to grasp is in fact within reach. Iwasaki’s creations teach us that if we would only perceive the ostensibly worthless things before us on a slightly different level and survey their scenes with proper imagination, the doors to utopia within them are always open.
(Translated by Hanare x Social Kitchen Translation) 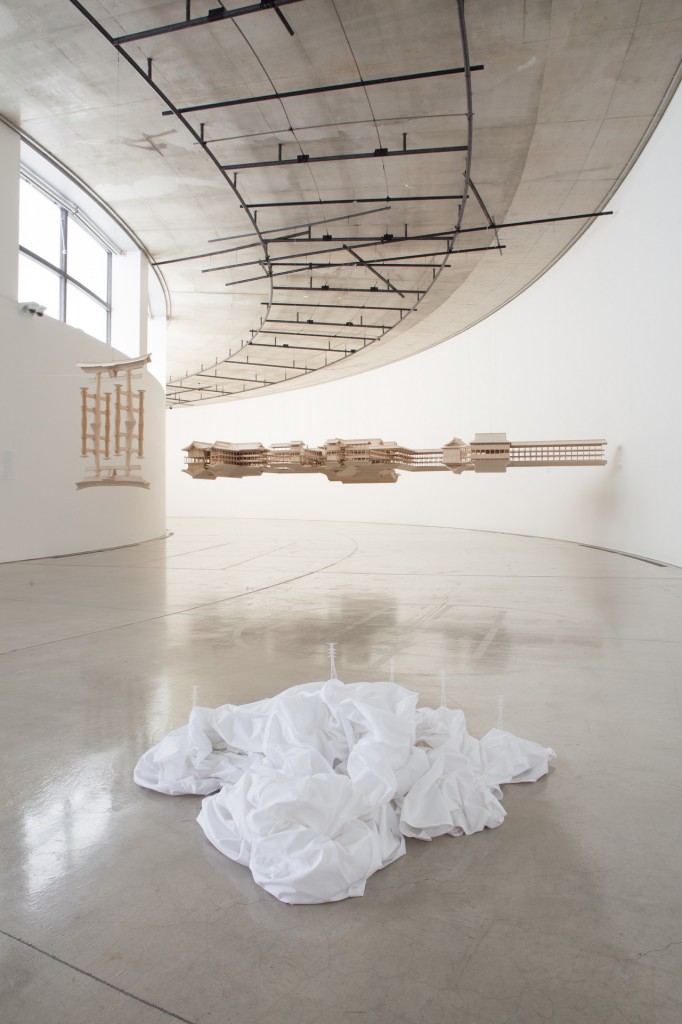 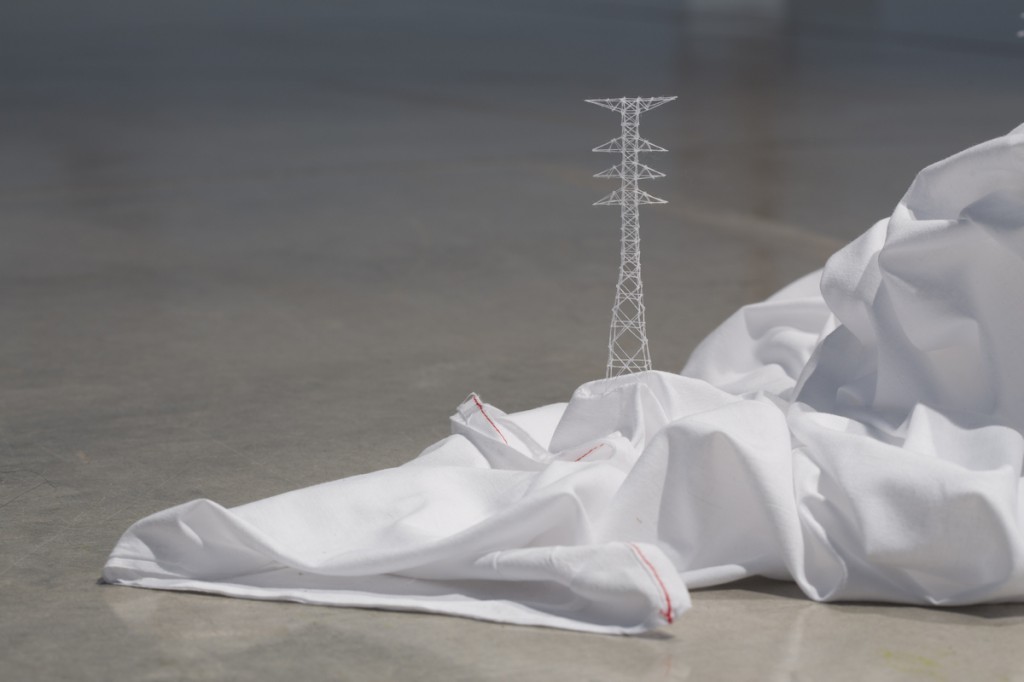 Out of Disorder, 2013
Dimension variable | Linen 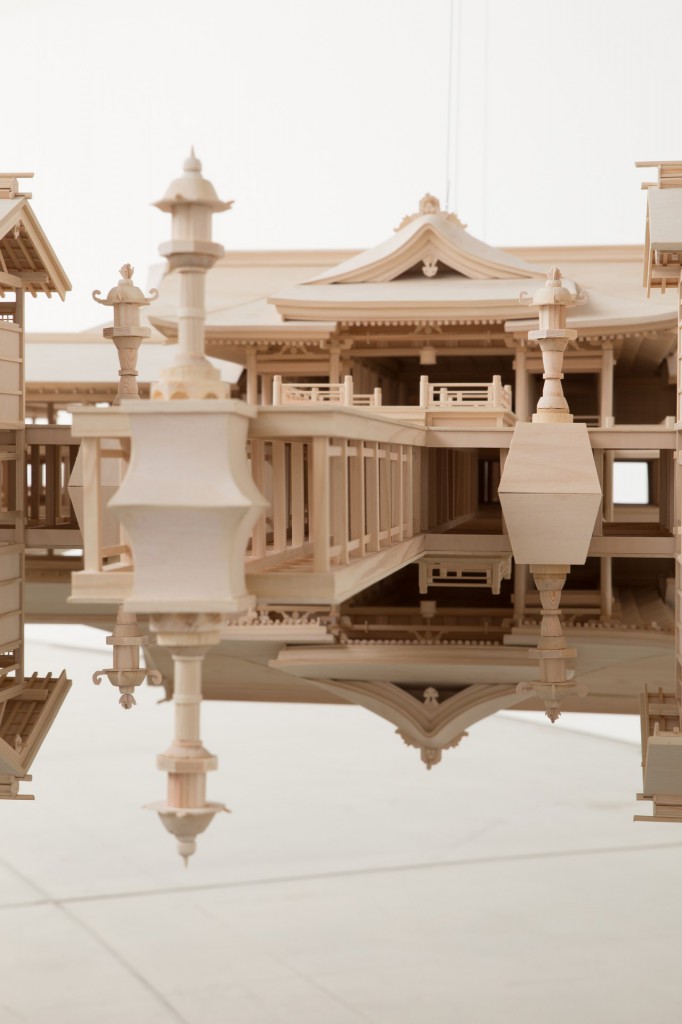 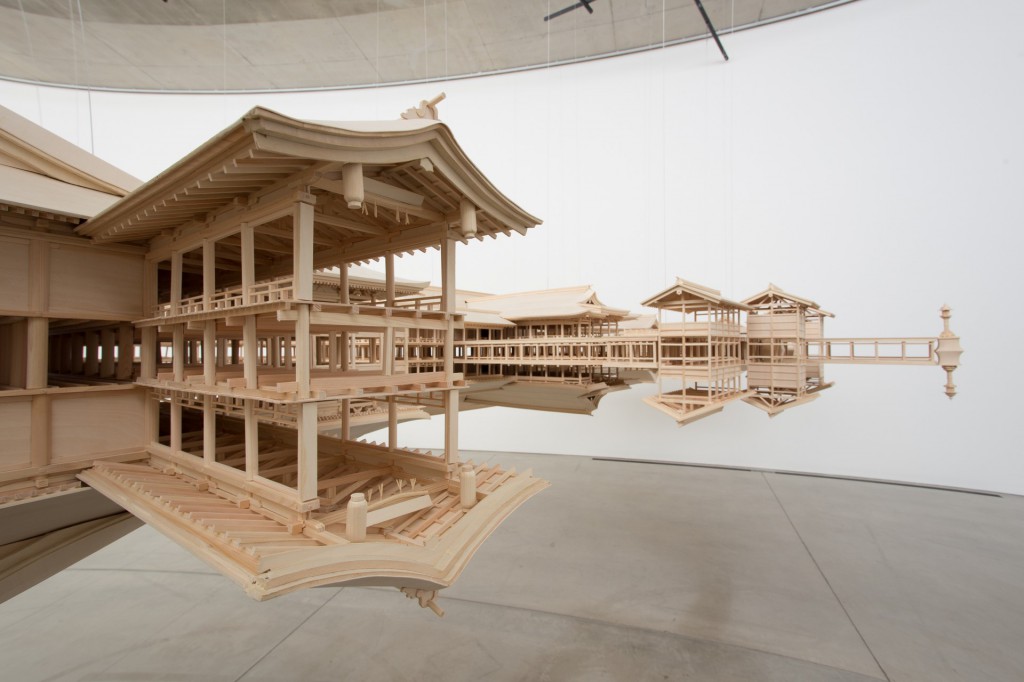 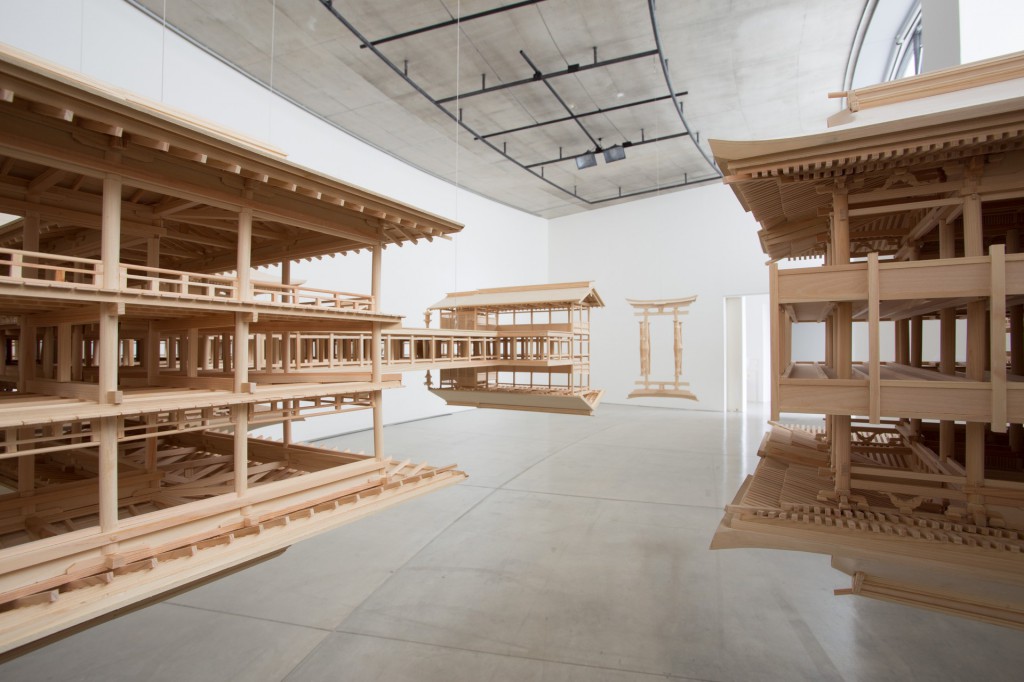 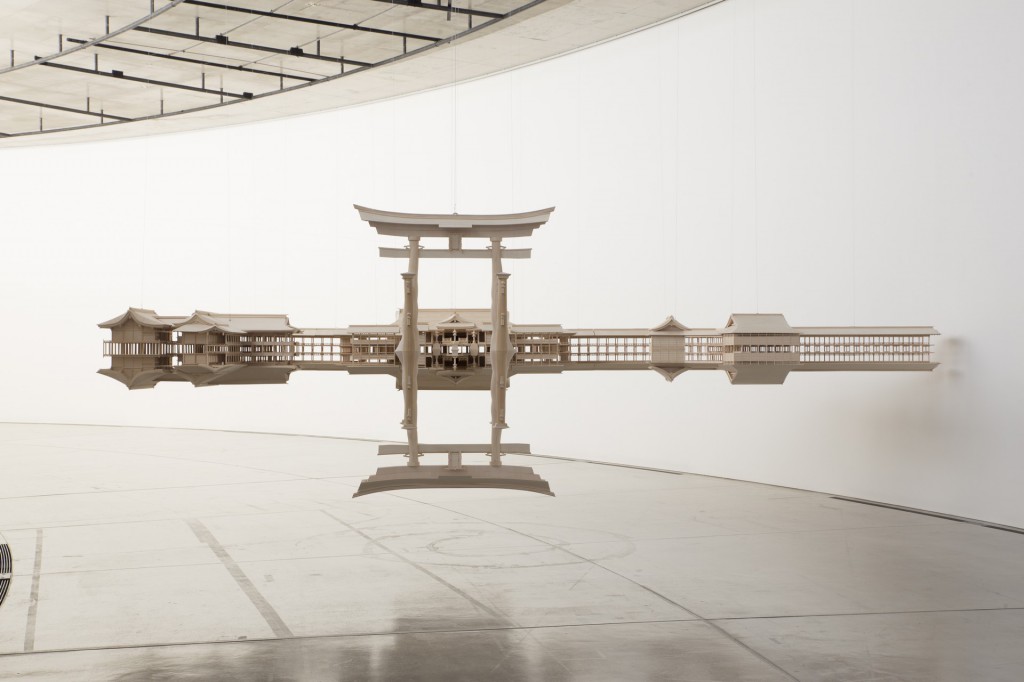 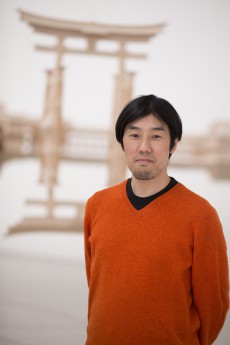 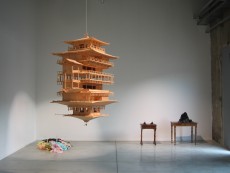 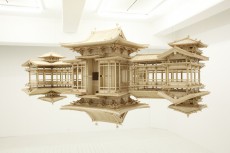 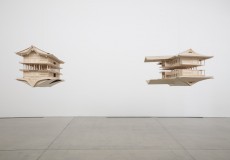 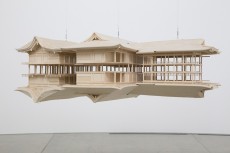 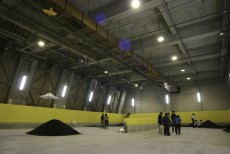 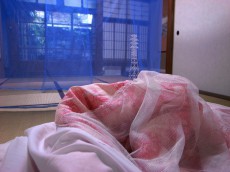