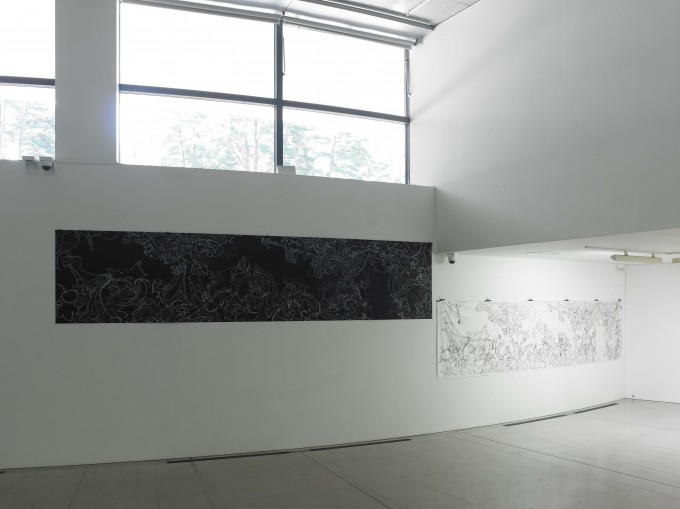 It goes without saying that artists are fully aware of the balance between the overall structure, shapes and colors in their works. Equivalently or more importantly, artists construct the whole piece after spending a long period of trial and error and days of deep contemplation for the details of different parts in the whole. Especially in pictorial representation, what artists often consider as important as the subject of the work are such details as their brushwork, which may or may not show the brush movement, the texture of paints and pigments, and color variation emerging from differences in coating.

In HOKI Nobuya’s works, which are characterized by rhythmical line drawing, lines seem to be dancing freely in all directions at first sight. Actually they are lines produced as a result of his inquiry into the structural elements of painting and the accumulation of his experiments. Lines running on the surface occasionally break up or disappear in the background just before certain shapes come to be combined, or you might think that one of them appears to be a certain character [fig.1]. Shading and strong/weak stresses of drawing temporarily provide a perspective, but they are not intentionally consistent. As a part of the image seen in the front looks as if drawn deeper into the back, the artist tries to eliminate the spatial illusion in painting. While these lines have complex variations of shade and thickness, they seem to have been drawn in a constant manner, and you can tell that such variations are not caused by mere difference in strength of brushstrokes or speed. That is why his overall work has mysterious homogeneity. Furthermore, he is meticulous about undercoating the canvas surface, methods of drawing lines, and choosing brush materials. His meticulous attention shown in the details all over the picture gives his work distinctive atmosphere.

So far Hoki has produced works, which refer to and analyze the pictorial space/surface. The painting, which he has been working on recently and calls “double line drawing (NIHON-Ga),” refers not only to pictorial space but also the very lines drawn there. The double line drawing is done with two pens, which he uses together at the same time, in two colors (wine red and navy blue), which he considers to be colors composing black[1] [fig.2]. The attempt to create space and plane surface unique to painting, which is not a figment of reality, and to refer to the elements that make up “painting” seem modernistic at a glance. On the other hand, however, his own drawing method and rules are strictly controlled so that he would neither be overwhelmed by his physical pleasure in drawing lines, nor would he merely work from force of habit. His method reflects his awareness of his physicality, and the method seems to be derived for him to accept that physicality or deny it accordingly.

As he is exquisitely sensitive about materials and preparation for production, the best place for him to create is his studio surrounded by many materials, art supplies used for experiments, and files that contain all results. As he participated in a residency program for the first time, his work produced during his stay was different from paintings that he usually produces, and an “experimental” form was adopted.

This time he made oil transfer drawing, but at first, he tried frottage. He was not only interested in reflecting the locality, but also wanted to learn more about representation with woodblock prints, showing interest in a relationship between printed, transformed lines and lines directly chiseled by Aomori-born woodblock print artist MUNAKATA Shiko (his works and printing blocks were displayed during the exhibition period)[2]. Hoki’s interest is related to his many years’ pursuit of transforming his line drawings into painting. In the process of production, he tried out many pre-production prototypes in order to find most appropriate paper, cloth, painting materials and tools, actually experimenting on detailed adjustments to the thickness of traced lines, quality of printed image, texture and conditions of rubbing. Consequently, the plan of frottage was changed to oil transfer drawing.

For one of his oil transfer works, oil paint mixed with Vaseline was painted on the back of black paper, on which he drew lines without a pause, with a handmade white crayon, and the lines were copied on white cloth underneath. This piece of oil transfer drawing on about 80x109cm paper is a line drawing with the focus on a motif, some form that often appears in Hoki’s works that reminds us of a certain character [fig.3]. In another 110x500cm oblong oil transfer drawing, three large waveforms give a movement to the entire picture [fig.4], and in the details are many small scenes seemingly representing shapes, which are likely to form something or look like certain characters as in his small works [fig.5]. Splitting scenes to some extent, those shapes lead viewers’ eyes rhythmically from right to left or from left to right like scrolls of frolicking animals without icons and stories. While having multi-viewing points and being composed of plural scenes combined, this long piece adopts the picture configuration of Japanese painting with a sense of unity as a whole. As for lines drawn on the black paper and white cloth, the colors of lines and those of the background are reversed, and this reversal highlights similarities and differences between the two. Since they are transferred, drawn lines and images ought to be the same, but when the two are compared, lines on the black paper, which are controlled by the artist to the last detail, are well-balanced and rhythmic in strength, turning on and off the unique depth of the whole picture. Lines drawn on the white cloth, on the other hand, are attributed to chance with unexpected part strengthened or weakened, and show different looks and dynamics than those controlled by the artist. These lines appear to be more wild and flashy “than expected” (compared with the original black paper), which upsets the balance slightly and gives a disturbing tension to the picture as a whole [fig.6]. _e tension may come from a strange feeling caused by the difference between the texture of the lines depicted by the artist and that of converted lines, the outcome of which is unpredictable.

In another work, which is also oil transfer drawing, white paint mixed with pearl powder is painted on a piece of black paper, and a white paper is placed on it. Lines on the black paper are scratched with a hard object to be transferred on the white paper. Since there are only scratched lines on the black paper while white, copied lines are left on the white paper, they look as if they are plain white and black sheets of paper put side by side. Even looked at closely, it is hard to capture the whole image [fig.7]. Only sparkling traces of lines are shown there like lingering fragrance. It is the very vestige of an act. It seems that Hoki, who has pursued how the act of drawing and drawn lines should be, tried to emphasize the act even more by not showing lines in the work. I don’t think that this is unrelated to the fact that his work is presented in a residency project in which emphasis is placed on the “act of creation.”

In his works, various elements are interestingly mixed, for example, self-reference about painting, historical aspect as a contemporary Japanese artist as shown in his adoption of the spatial and pictorial composition of Japanese painting, emphasis on physical senses such as touch and sight, the act of drawing including habits of hands, and consequent personal control of physical function (similar to the artisan attitude) so as to have a thorough command of the picture. Then, you might say that he considers very important not only painting as a result of his drawing but also his act of drawing itself. _ere, drawing is not regarded as subordinate to painting, or rather, he attempts to create “painting” through drawing, because he wants to turn over the long-lasting superior/subordinate relationship or at least make them equivalent. As he has been keen on achieving lines with his physical attributes and yet with autonomy, transfer drawings that he tries and calls “experiment” consist of lines, which he might have attempted to acquire even by chance.

[1] In an edition having the background and lines in reversal, two colors (yellow and white) are sometimes used. Other colors are also used in a trial to apply multiple colors.
[2] He mentioned such interest at the artist talk on July 28, 2012, the opening day of the exhibition.

***
The Works produced in ACAC. 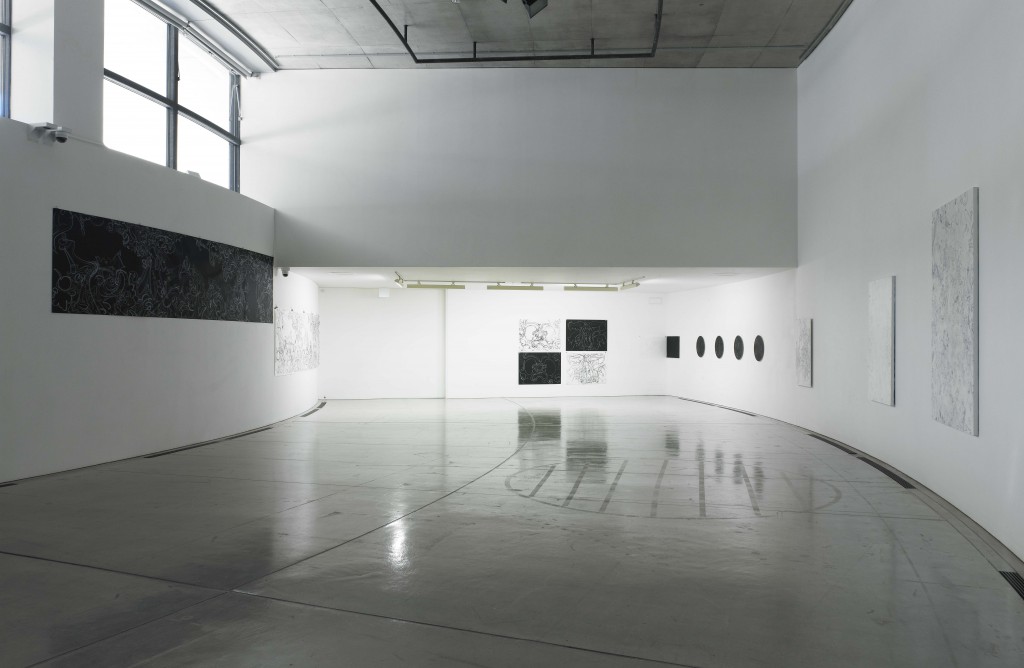 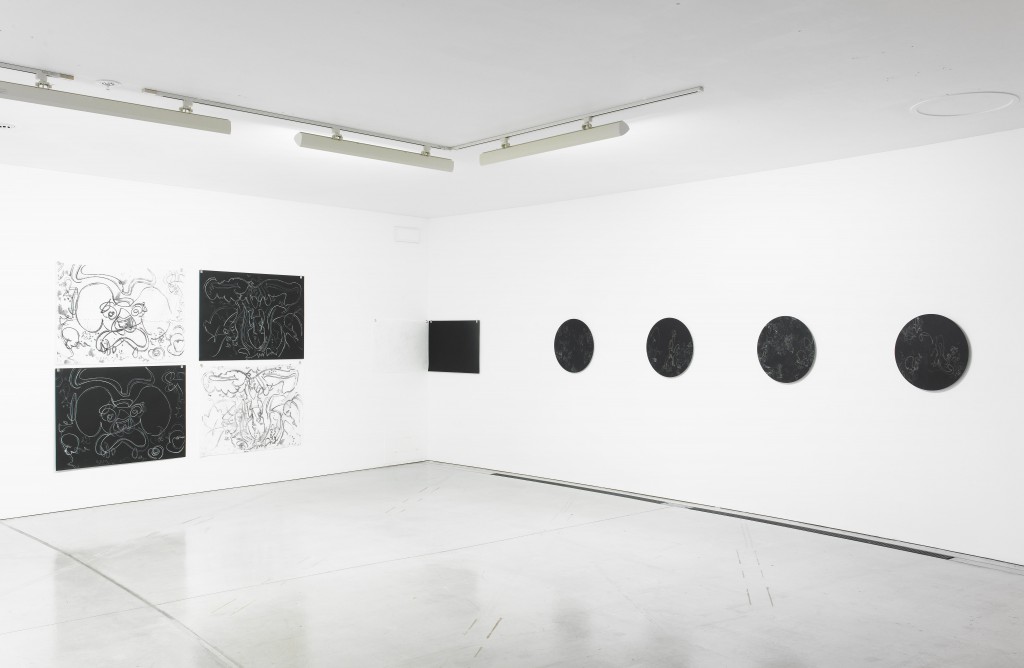 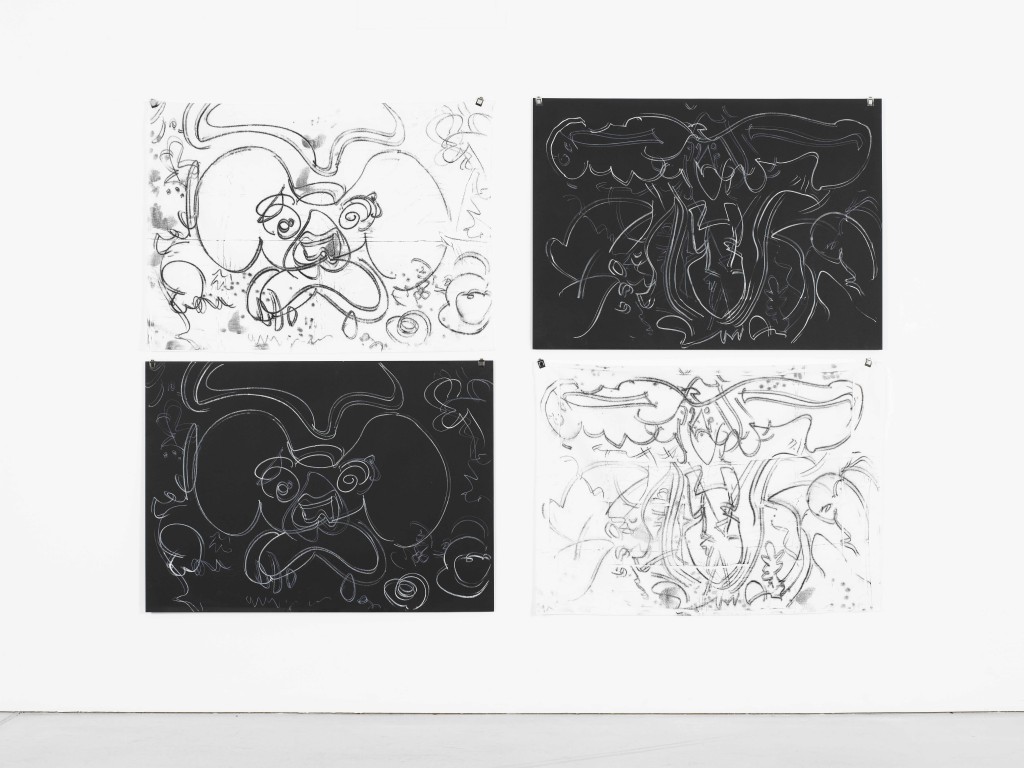 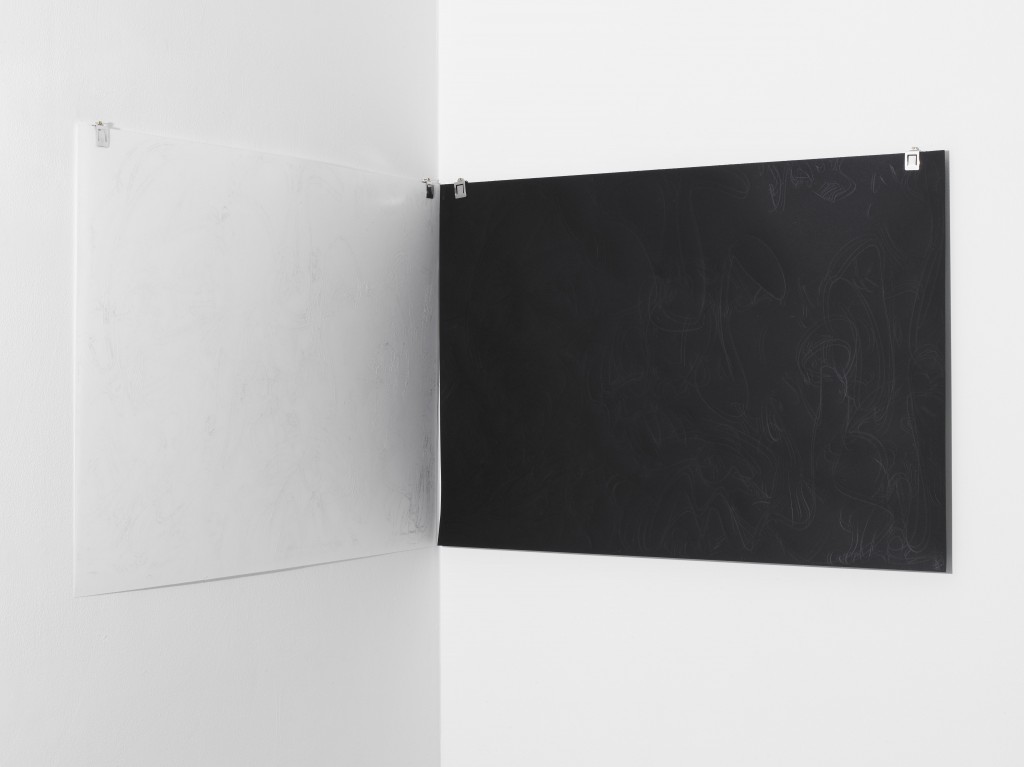 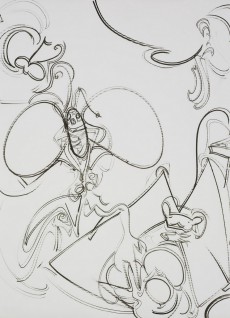 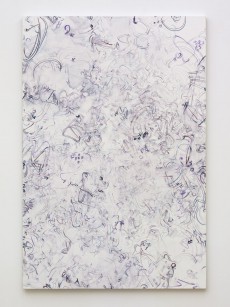 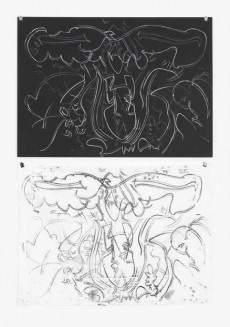 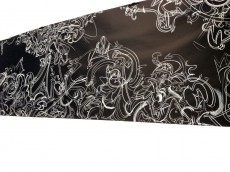 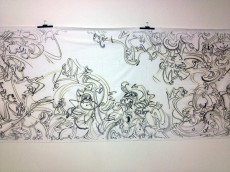 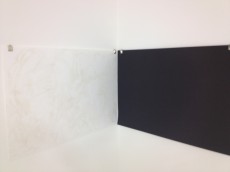