Texture and Sense (Kime to Kehai) 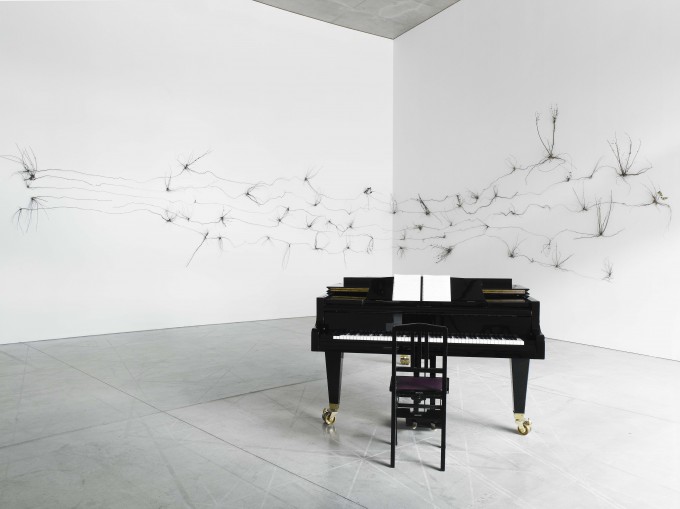 NOMURA Makoto is a composer who has a rare talent to convert all phenomena whatever into music. Exploring his own compositional method, he has created works of different forms including land-art, sound installation and outdoor sculpture, which make multilayer experiences possible such as visual, auditory, and physical, including production with the viewer’s own hands. Nomura produces music from life itself. All his works are connected to his life as a starting point, and tell us stories. Nevertheless, his methodology is not simply using his personal belongings as materials or giving a new perspective on his daily life. His day-to-day life itself creates and develops music.

Nomura’s residency work in Aomori started with his normal lifestyle in Kyoto. With his wife and assistant, musician YABU Kumiko, he stayed at ACAC to tackle his production on the extension of his daily life. He said he started farming last year. As he considered working in a vegetable patch very interesting, he approached ACAC with a proposal of converting farm work into music for the residency program in Aomori so that he could keep up with the rhythm of his life. Though the proposal was a little surprising, we thought the rooftop space of the accommodation building would be a great place for farming. It is not such a nice place as so-called roof garden, but it is a strip of land of about 70x8 square meters with 20cm-high raised ground overgrown with weeds. Nomura’s idea was to make five long ridges there to grow vegetables, make a musical score like a huge geoglyph and compose music. The five ridges are likened to musical score while vegetables are to musical notes, so that he can create a score that will change and develop as vegetables grow. It was hard to believe that he could achieve his aim under such unstable conditions that this beginner of farming wanted to cultivate the unknown, unproductive land overrun with weeds. He began to work, however, steadily and indifferently with his unique cool mindedness and strong magical conviction as if he were enjoying the environment like that.

Nomura named this project work Field of Music. To begin with, he spent a week plowing the land and making ridges for staff notation. Then he chose by lot where to plant vegetables under chance operation. Complying with all different contingencies and accidents, he tackled farming. As the Field of Music is basically a field, he had to take care of it all the time from the start until the project was over. Mr. and Mrs. Nomura, the art circle of Aomori Public College, ACAC staff and volunteers worked every day watering in the morning and evening, weeding and keeping the observation diary. The observation diary served as not only a documentary record but also a communication tool to inform other members of daily happenings. As several different people wrote the diary, differences in each one’s viewpoint and their interests became apparent. It was different from normal fields where many of the same kind of vegetables were planted along each ridge. In order to give the appeal as a score, a variety of vegetables were randomly planted. Consequently, in the field was a compositional beauty with low density. In one and a half months between the reclamation work and the start of the exhibition, vegetables grew well and showed musical notes of different sizes and colors. Looking down from the production building in front of the accommodation building, visitors could enjoy the bird’s-eye view of this Field of Music. Displayed at the viewing point in the production building was a score on a music stand showing the kinds and arrangements of vegetables (notes) originally drawn by Nomura. Visitors could see, behind it, Field of Music, his work composed as land-art. (fig.1-1,1-2) Binoculars were provided for viewers to see how vegetables, that is notes, were growing.

It is difficult for many viewers including myself to imagine tones by only looking at this Field of Music. However, it is fun and stimulates creativity to imagine how he plowed the field and wrote the musical score, and to see what vegetables are growing and where they are growing, following his lovely autograph score. One musician said, “If you listen to whatever as music, it is music.” This remark can be interpreted that if the audience who enjoy music sharpened their senses and polished their creativity, the world would be far more interesting because everything might sound like music. Nomura, who discovers beauty and fun in sounds made by children and those who are not experts in music, has outstanding capacities to be able to “listen to whatever as music.”

He can naturally build attractive relationship with others. You will easily understand it if you refer to his activities so far including Shogi music[1] and Concert in a swimming pool.[2] As for his work this time, the composition was not based on the flawless calculation in his mind but accomplished through the encounter and collaboration with many people. For “scarecrow” to protect the Field of Music, he asked artist ASAI Yusuke, who was staying at ACAC during the same period, to design it. Members of the art circle of Aomori Public College, which was formed on the occasion of the ASAI exhibition, made two scarecrows on a limited budget of \1,000 (fig.2). In addition, the same art circle took care of the field when Nomura was absent. What he did was not only asking many people to support his production, but also repaying them for their support in different ways. For the ASAI exhibition, for instance, he conducted a performance with a butoh dancer as spatial collaboration. For art circle members, he provided them with the opportunity to experience a prepared piano. What is more, he prepared meals using vegetables harvested in the Field. He does not act through mercenary motives to build a fair exchange relationship. During the exhibition period, a concert of the Field of Music was performed by a wind orchestra composed of a total of 40 people from the brass band of Aomori Public College and the brass band of junior high school students in the city (fig.3). Also for his piece named Root Music, collaboration with a string trio of local musicians was realized (fig.4). He does not end up only with writing the music. He also enjoys appreciating the change in the process and sharing the pleasure with many people. Acting in a relaxed manner, he does not rush to grow his work. This production process is attractive.

During the residency period, he created three works, and the connection between them is interesting. When he was plowing the land on the roof covered with weeds in order to produce Field of Music, he thought that the patterns of the freely spreading roots were charming. So he made combinations of the pulled-up roots of the weeds to create staff notation with flowing curved lines, which looked like a mural. Sound installation Root Music is completed when a visitor plays it. (fig.5) There is a piano in the center of the gallery, and on the music stand is an instruction paper explaining how to play the Root Music. Five keyboards are numbered 1 to 5. The music is written in treble clef, and sounds on the staff are E, G, B, D and F from the bottom up. Here he skillfully adds a little seasoning. He raises F by semitone to make it F sharp. Complex tones emerge by the raised semitone. What all performers have to do is to simply play five specified sounds following the score. As the instruction is easy enough for even a child to understand, all he or she has to do is to read the music on the wall following the instruction, and play carefully concentrating on each sound. Unique sound echoes in the gallery space let the performer self-absorbed in the pleasantly flowing sound. Once you sit in front of the piano, you will be tempted to play repeatedly in this pleasant space of sound. Because anyone could play beautiful sounds with their own hands, it was a place where they could feel everlasting satisfaction.

The last piece is Lettuce Play the Piano played by the wind. (fig.6) It is an outdoor sculpture put up as an installation in the forest in order to thank for the broken piano, which was used in his “Concert of Fire,” held in 2004, and brought to Aomori on this occasion. The place where the keyboards had been was filled with soil to sow lettuce. The broken-away piano hammers suspended from a tree play the sound hitting piano strings when the wind blows. Even a gentle breeze makes the hammers hit the strings and faint sounds are heard. This work is quiet but profound, and seems to blend into the environment.

As you can see, the title Lettuce Play the Piano is coined as wordplay. “Lettuce Play the Piano” comes from the phrase “Let us play the piano,” which has the similar sound but a completely different meaning. “Lettuce Play the Piano” is the title in English, and its Japanese title is “retasu piano” as the sound was given priority. Nomura is able to convert even a pun into music. In a sense, a pun is a witty use of sound, and pure connection or difference between sounds produce humor. He finds beauty even in everyday bit of fun, and converts it into music in which people can participate. That is one of the charms of Nomura as a musician.

The growth of vegetables in the Field of Music was on a full-scale around August, and in the latter half of his residency period, he could provide daily meals using only harvests from this field of music. (fig.7) What is more, the field of music has been passed on to artists taking part in the next residency program, giving harvests to them. Harvesting continued until it began to snow in mid-November, and now in December, the field that has finished its role for a while is covered with snow. Field of Music, which started as having its roots in everyday life, was primarily made for the production of music. Eventually it could provide meals to live. In a sense, this reciprocity between life and art suggests the ultimate state of the relationship between the two. Nomura’s creative life shows us that life itself is linked to creative acts, and conversely, creative activities make up life. I strongly feel that his way of life presents a significant clue for us to survive today’s world. How you learn from his act of creation is up to you in a way similar to how you interpret the phrase, “if you listen to whatever as music, it is music.”

***
The Works produced in ACAC. 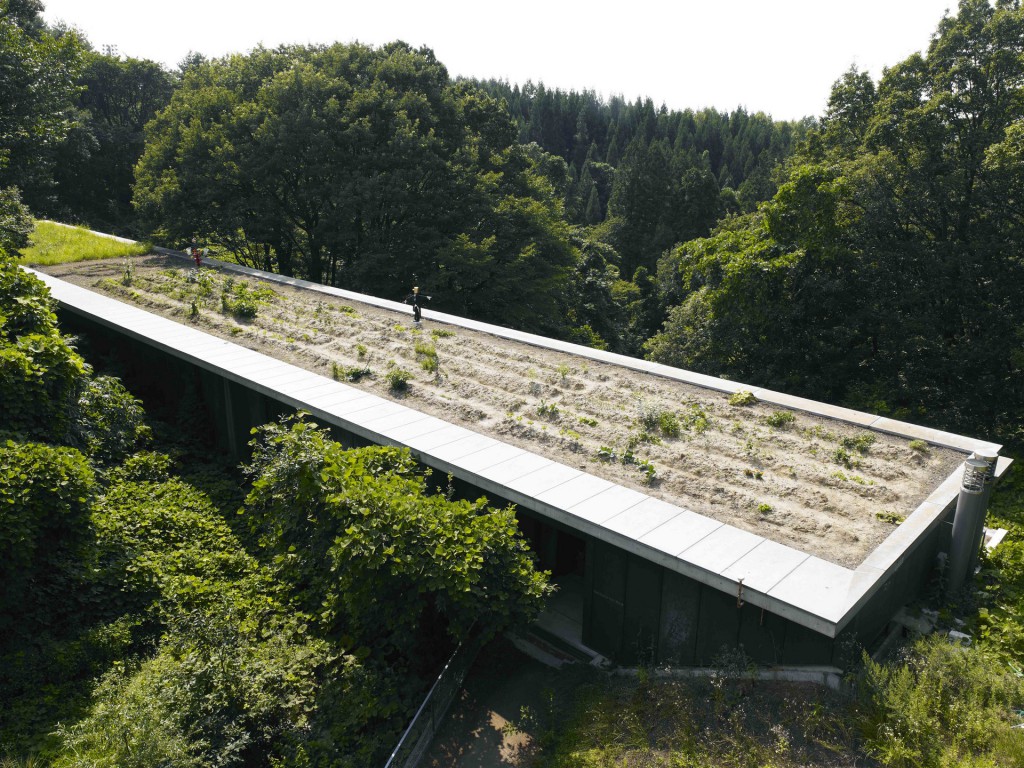 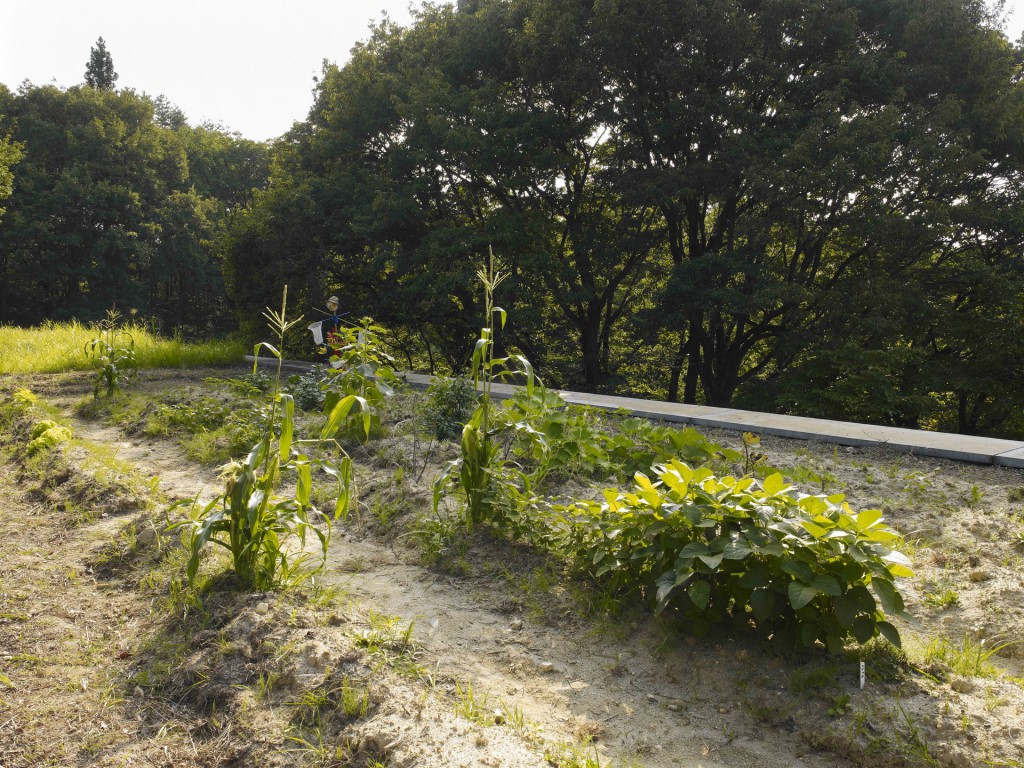 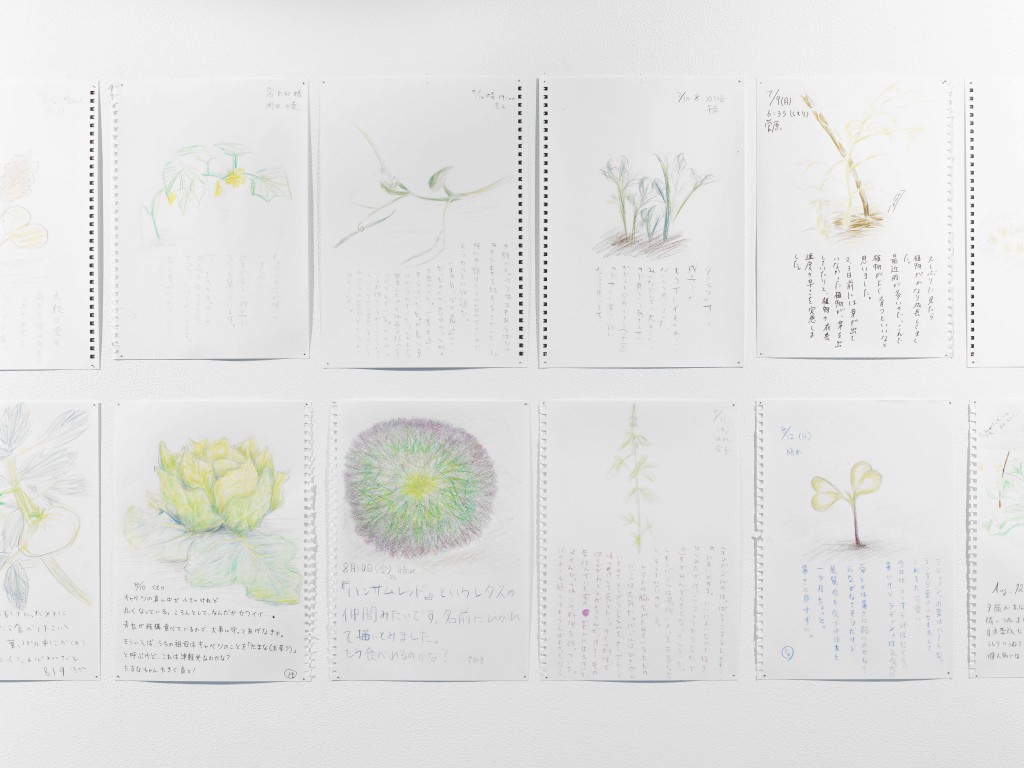 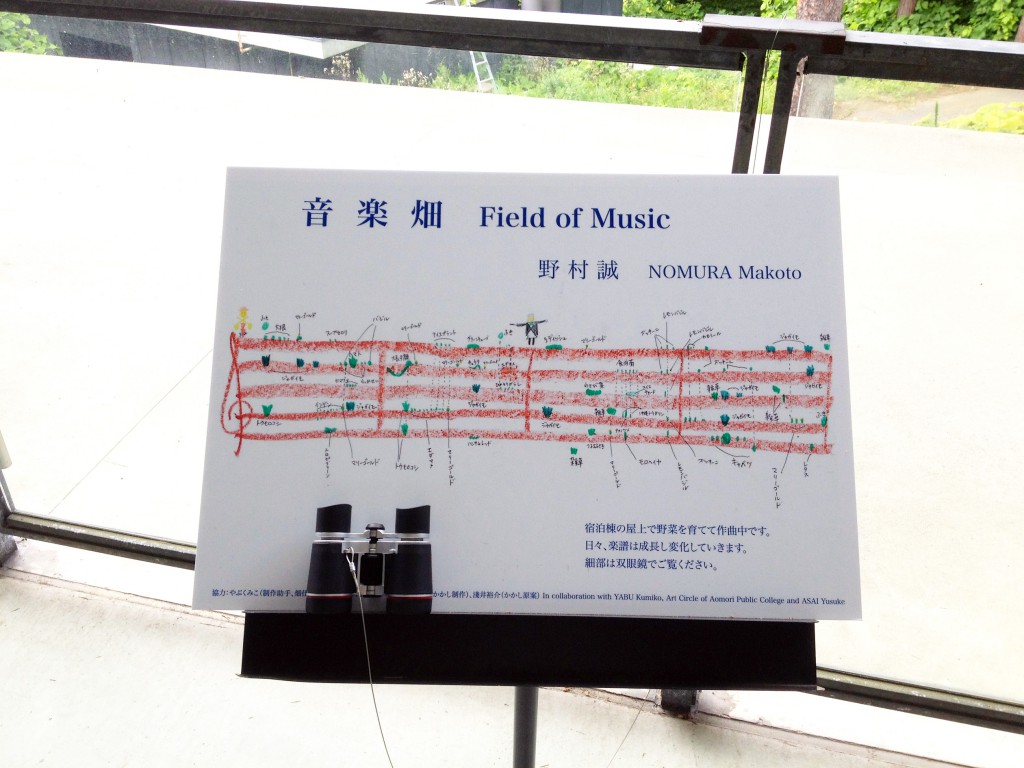 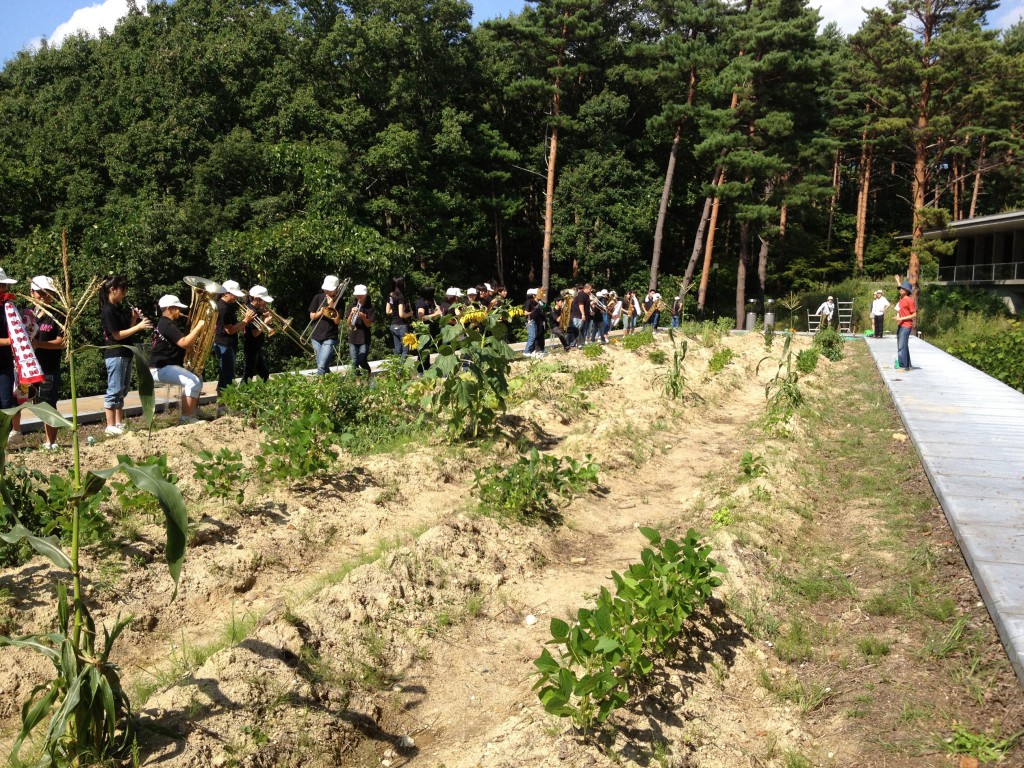 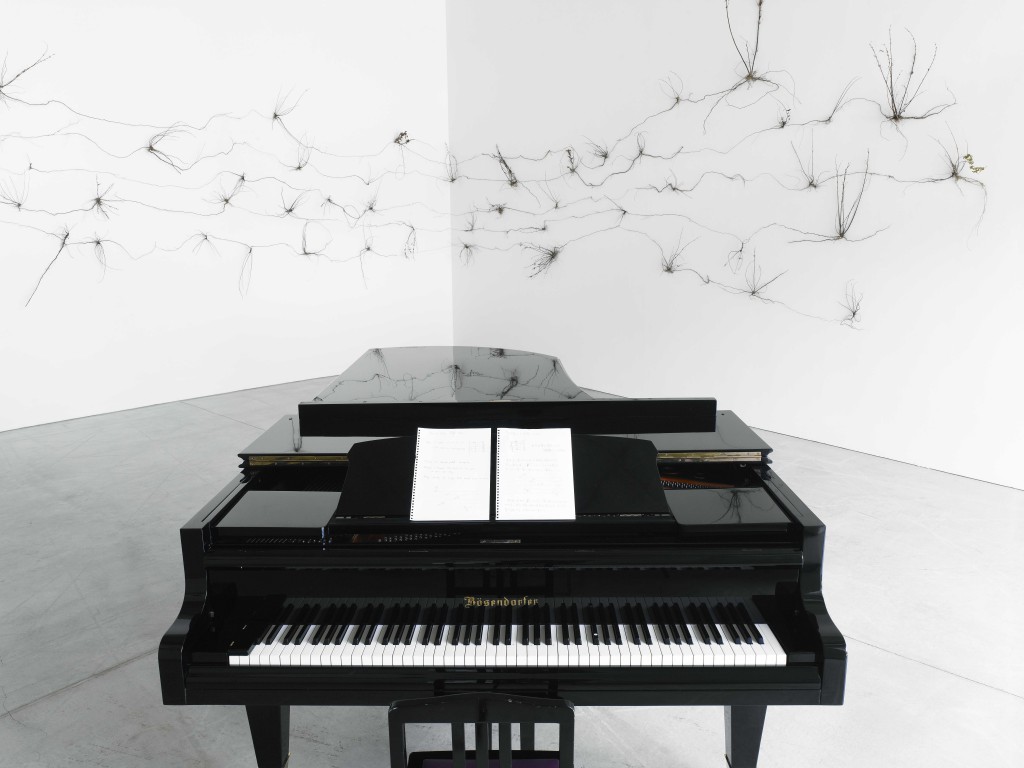 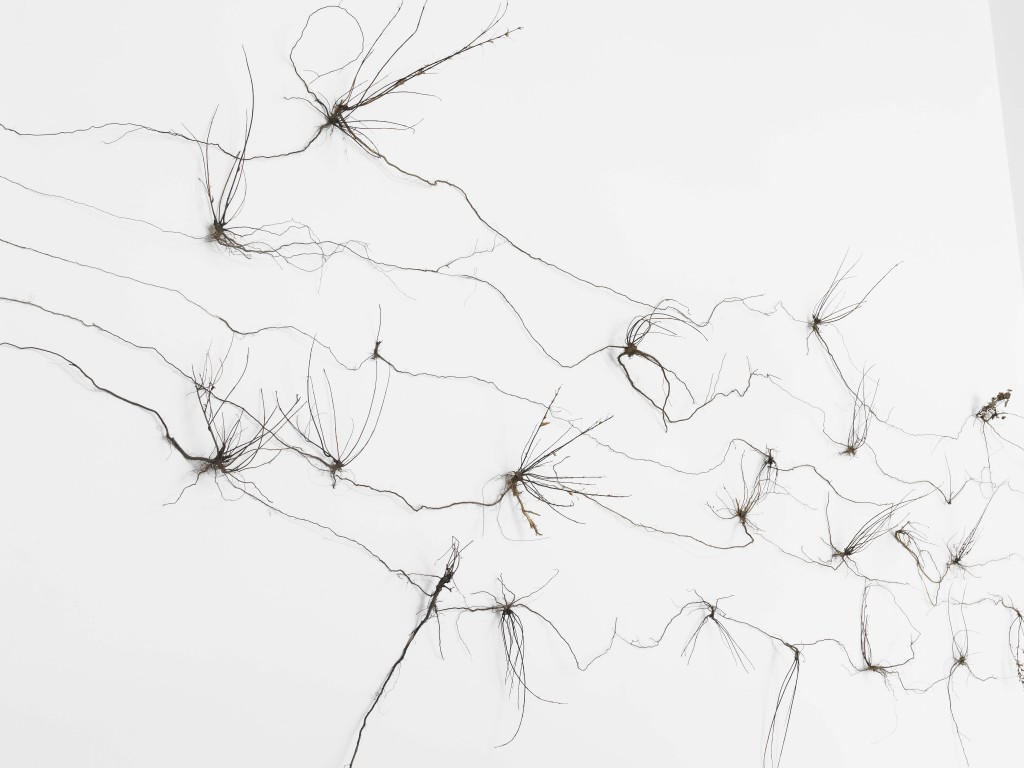 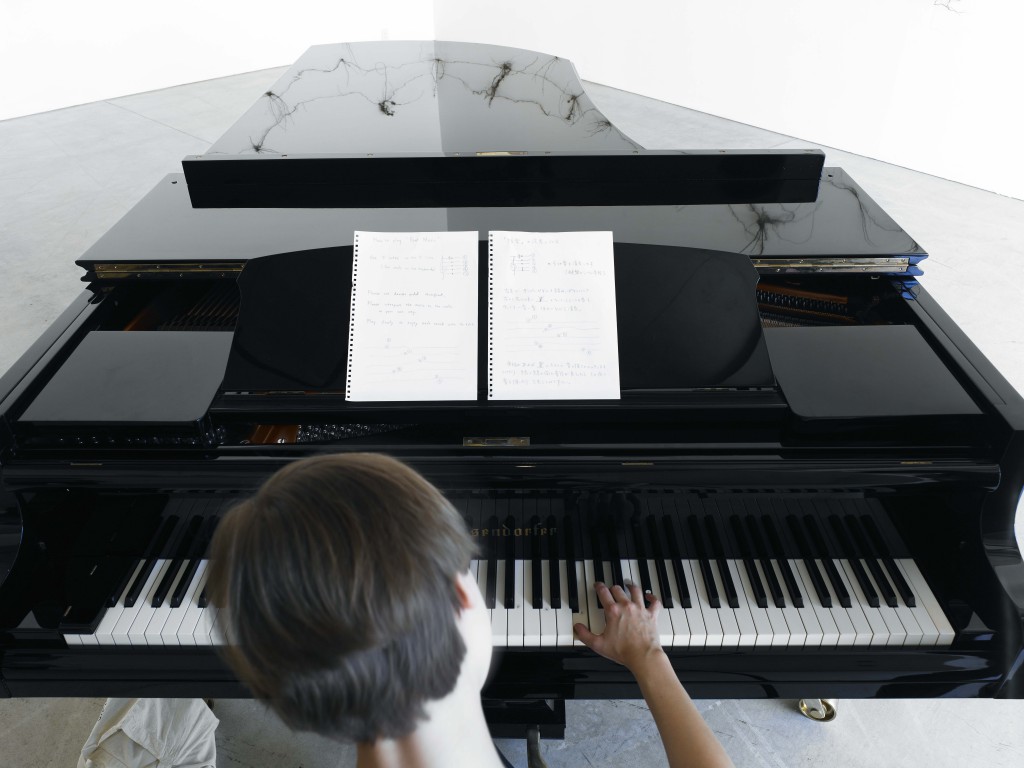 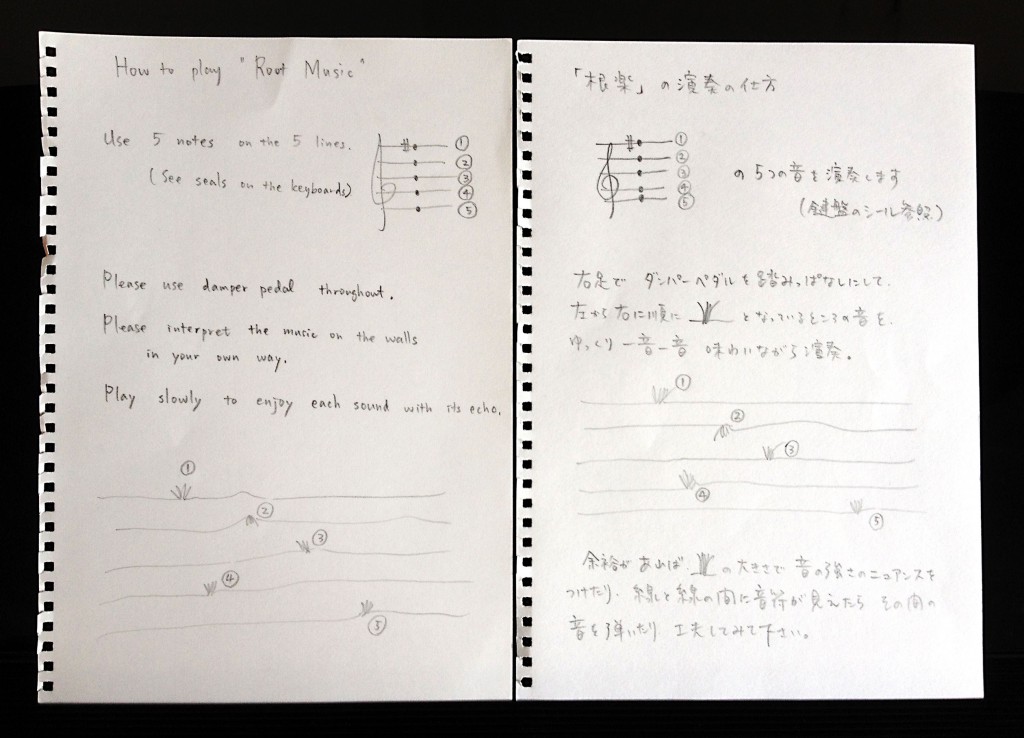 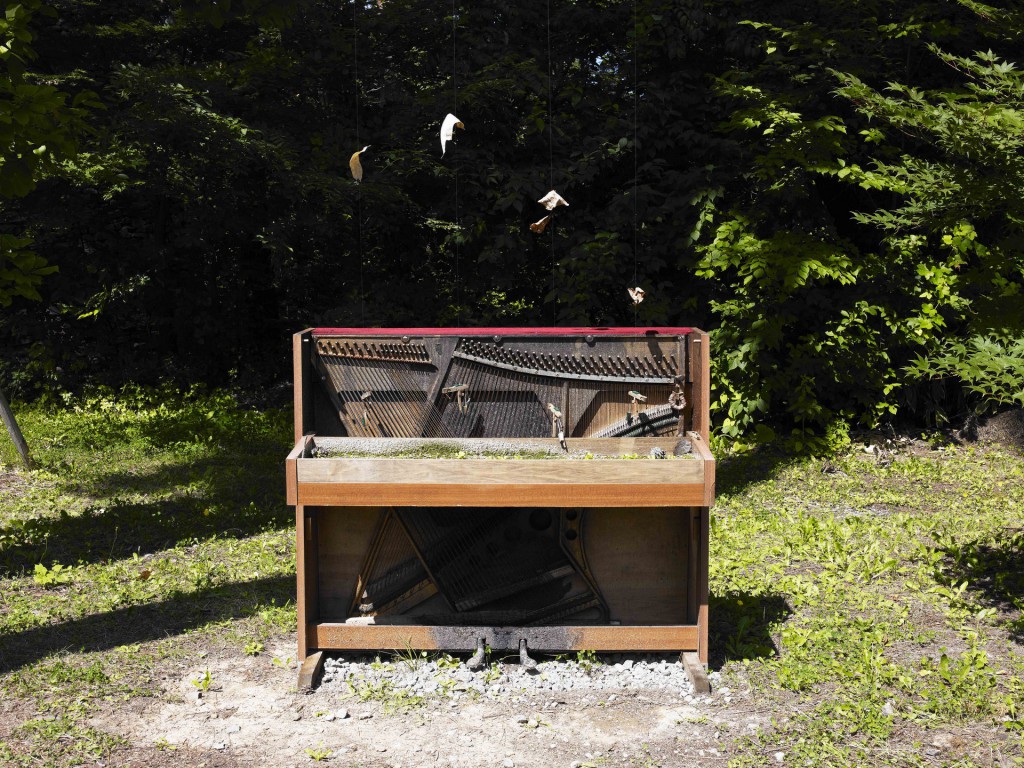 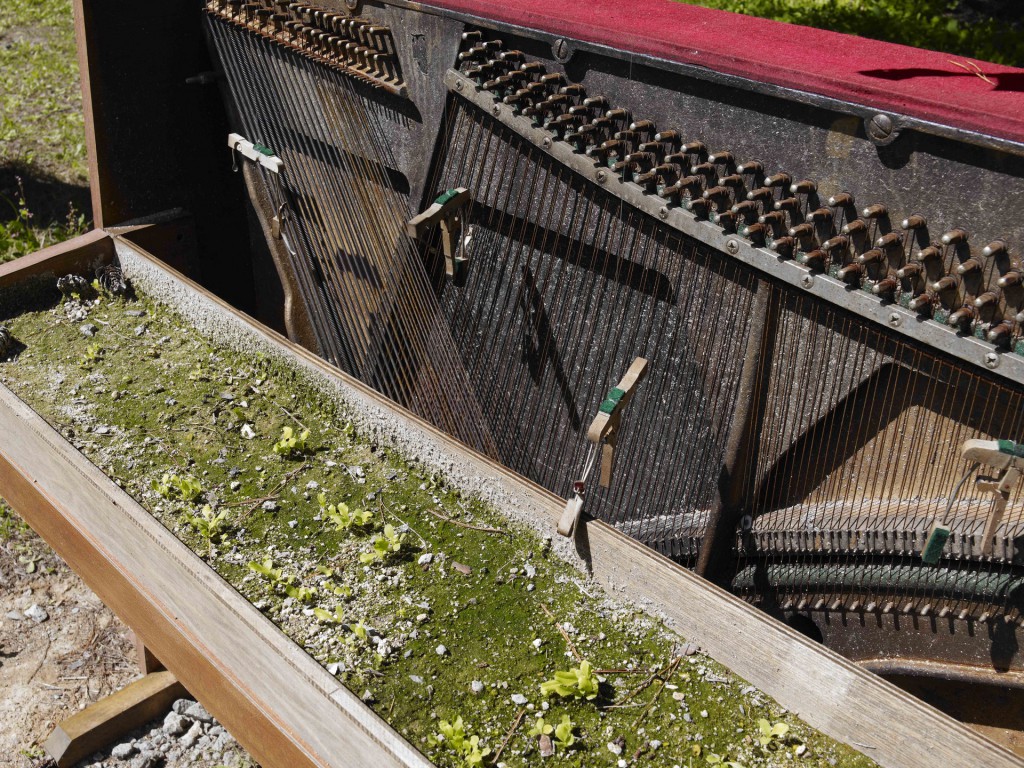 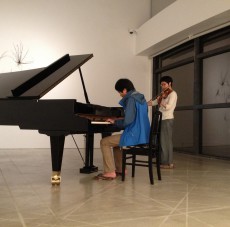 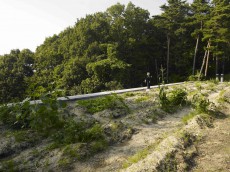 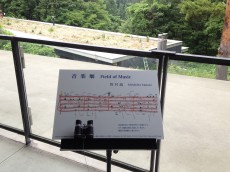 fig.1-2 The score for Field of Music 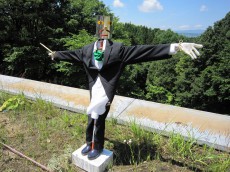 fig.2 Scarecrow for Field of Music 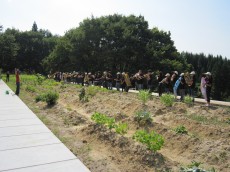 fig.3 Concert by the wind orchestra 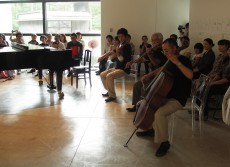 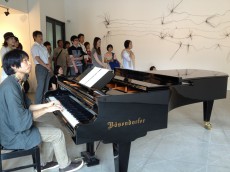 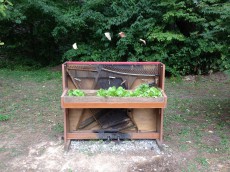 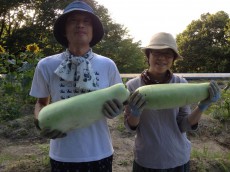 fig.7 Harvests from Field of Music