Painting as a Public Place

Painting by Asai Yusuke is completely public. What we call painting is, you may imagine, a thing painted and finished in silence by an artist in his or her closed atelier, but Asai's painting is enjoyably contrary to such a feeling. He produces a public place as well as a painting. Over these 6 or 7 years, he has visited different places to carry out varied art projects, including white cube spaces like museums and galleries, outdoor spaces and other buildings such as a vacant house, and then painted under different restrictions related to those places. He calls himself a "painter" and as he has wandered from place to place in search of a location where he can continue to paint, he has gradually established his unique technique.
Asai's painting technique has 4 specific characteristics. To begin with his painting seldom needs special painting materials, but he chooses daily necessaries easily accessible to everyone as his own materials; masking tape, water color markers, soil, water, ball point pens, pencils and leaflets. Secondly, it rarely needs diligent preparations for painting like stretching canvas, drawing hundreds of studies and sketches. Thirdly, it can transform every place into a canvas, enabling him to paint even places considered inappropriate for painting, such as telegraph poles, house walls and floors. Finally, most of his artworks are not completed by his sole hand, but in collaboration with others.
Asai draws pictures at any time. He grips a pen in his hand during conversation, and even at the dining table he also draws on disposable wooden chopsticks, napkins and so forth. Of course anyone can continue to draw pictures, but Asai has succeeded in converting actions of painting into public benefit, and therefore he continues to gain opportunities to paint places unknown to him. He paints a street like a child in a case (fig.1), and creates large-scale land painting that you can see from the sky like Nazca' Lines and in other cases (fig.2). Such are everyone's dream," if I can paint such a place." But Asai has actualized such a dream one after another through converting a production site into a public place favorable to numerous others, as well as satisfying personal desire for expression. His enormous action painting always assumes public sphere. It is certain that his artworks are hugely fantastic, but his miraculously large volume of works can also be attributed to his unique painting technique that he devised to continue painting and developed as a requirement of working as an artist within this era.

Over this decade or so, especially from the end of 90s to the beginning of 2000s, various art projects such as Toride Art Project and Echigo-Tsumari Art Triennale emerged among many parts of Japan, which are sited around town, taking the work out of the museums. In artistic creation, more attention has been paid to interactive activities that attach great importance to the production process itself, called "participation-type" or "project-type" in which an artist creates a production site in cooperation with staff and audiences, as opposed to one-way activities that audiences receive and only appreciate through the artist. In the meantime, with dramatic popularization of internet-environment, there have been more and more requirements for "sharing" and "dividing" represented by the term "Common/ Share." Especially in a situation that everyone can become media for providing information due to the recent prosperity of social media, the sense of "Common/ Share" has been increasingly necessary. Against such a historical background, Asai Yusuke has become one of the most desirable artists at this moment as he creates "common" places through his own painting technique and as a result of simply seeking to continue to paint.

Now, we make a closer examination of his practice through retracing his creation in Aomori. 80% of the exhibition was occupied by his new works through on-the-spot production based on workshops and collaboration such as Earth Painting, Masking Plant, Sprouted Plants, Flour Painting and Type Tree, making this a very comprehensive project in relation to his overall practice. The centerpiece of the exhibition is an enormous wall painting made in clay earth, 72 meters long and 6 meters high. The Earth Painting was painted in water-dissolved soils gathered by a pail from 16 well-known spots in Aomori to the people of the prefecture such as Asamushi Hot Spring, Uto Shrine and Komakino Ruins. We started gathering soils at the beginning of April and there were massive snows covering the side of mountains like Komakino Ruins, but on the other hand the snows had almost melted around Asamushi area along the sea. Feeling surprise at such a wide environmental difference among distances of only 10 km or so, we gathered soils like a kind of ritual for discovering the area (fig.3). We crushed up the soils into minute particles to be dissolved in melted water, making earth pigments with volunteers. Asai did not keep any of his techniques secret and revealed every process including how to make earth pigments and how to create a painting, sharing his know-how with people generously. The Earth Painting was painted directly on the wall in front of all eyes without any hesitation or rough drawing. He repeated painting and viewing to realize the entire space with his whole body; it seemed as if he was trying to understand the place through painting. To create a painting is a means for interaction with a place from his viewpoint. He painted on his own for a while before he gradually gave surrounding people instructions to paint together. It's not like a painting class teaching how to paint, but he gave each attender a different role depending on their character, enabling participants to create their own place to paint at one's own pace.
The exhibition hall of ACAC has horizontal windows in a row on the upside of curving wall, and as an exhibition space it is very di cult in terms of the outside light pouring inside at all times. Asai, however, delightfully turned such a factor regarded as disadvantageous into an advantage, and then utilized it positively to create his unique place. For instance, he led participants to paint pictures in our on the sunny windows and completed a piece of Flour Painting through a workshop. In the evening the pictures threw shadows directly against the behind wall, making a beautiful shadowgraph as secondary product (fig.4). His attitude of surrendering himself to the natural environment can turn a negative factor into positive in a twinkling.
Asai Yusuke's working volume was incredibly massive. In the exhibition hall converted into his extremely large atelier, he painted the Earth Painting together with students and volunteers between 10am and 6pm every day and subsequently he continued painting the Earth Painting and other pieces calmly with only his assistant from night until dawn. He literally continued to paint. As many volunteers became surprised at the changes due to pictures added during their absence in the night, they continued to add more and more to the new pictures. The entire structure of the Earth Painting was formed through Asai's painting and removing again and again, and the details were freely painted by volunteers following his instructions. He seemed to work in order to maintain the common place for painting rather than to complete his artworks. The place and time that he had to work were something creative and splendid. Asai carefully watched how the whole was working together and provided people who got bored easily and children with new operations, one after another. He doesn't mind the different manners of participants and rather fuses such a subtle difference in how to paint and transforms accidents into artworks. Through the lens of a suspicious insight, you might think that he makes his personal artworks through exploiting a lot of free labor forces, but it's not the case. As he makes his painting technique open to everyone, he provides a "common" place where they can feel free to paint using the technique within the framework of his artwork. So, an extremely large artwork is completed under the name of one artist. There is an admirable relationship of give-and-take with an excellent sense of sharing in a natural way, showing each face of participants. A sense of "interdependence" suggested by Kosuge1-16 , an artists unit in the same generation, penetrated Asai's production site.
The Earth Painting was removed from the wall by more than 100 people on the last day of the exhibition. To remove a painting may be an alien custom to most, but it is in most cases that Asai's painting is cleared away with the time passing. In fact, as for the Masking Plant series, every part that is collected is transformed into a different painting through the technique of collage, and as for the Earth Painting, to remove it carefully enables him to assimilate it into his body. "It is because of its vanishing that I want to create a much better painting" Asai says. Finishing artworks is not the end and further sharing an experience of removing it provided us with an important meaning in the end. To share the experience of removing the painting could give us a chance to appreciate it more deeply, not only for participants in painting together, but also for incidental appreciators of the exhibition.
Asai Yusuke will be developing new painting techniques steadily in the future. Although I know little in terms of the techniques, I am sure that his production site will always be a public and free place that various people can visit.

Short explanation of each work
■Earth Painting
These works utilizes earth and water extracted locally, and some are painted directly onto walls and ceilings, some onto canvas or panel. Water and soil go together well, so he can remove them by scrubbing with a damp sponge. White margins designed in geometrical patterns and decorative areas are created by wiping off soil Without using a writing brush, ASAI Yusuke completes his work making excellent use of his fingers, hands, cotton swabs, paint brushes, and other various drawing methods.

1 KOSUGE1-16 is an artists unit formed by Tsuchiya Takashi and Kurumada Chishino in 2001. They transform appreciators into participants through artworks, developing “interdependent” relationships among participants or between artworks and participants.

■Masking Plant
Masking Plant are protean, ever-changing plant paintings drawn by tape and pen. Using temporary-use masking tape strewn up freely like a plant on the floor, walls, and ceiling, he draws a pattern on the tape with a washable marker. At a glance, it looks as if he has drawn directly onto the surface, but up close you can tell the drawings are on tape. Thanks to this, he can draw easily almost anywhere, but these works vanish just as easily when peeled off. 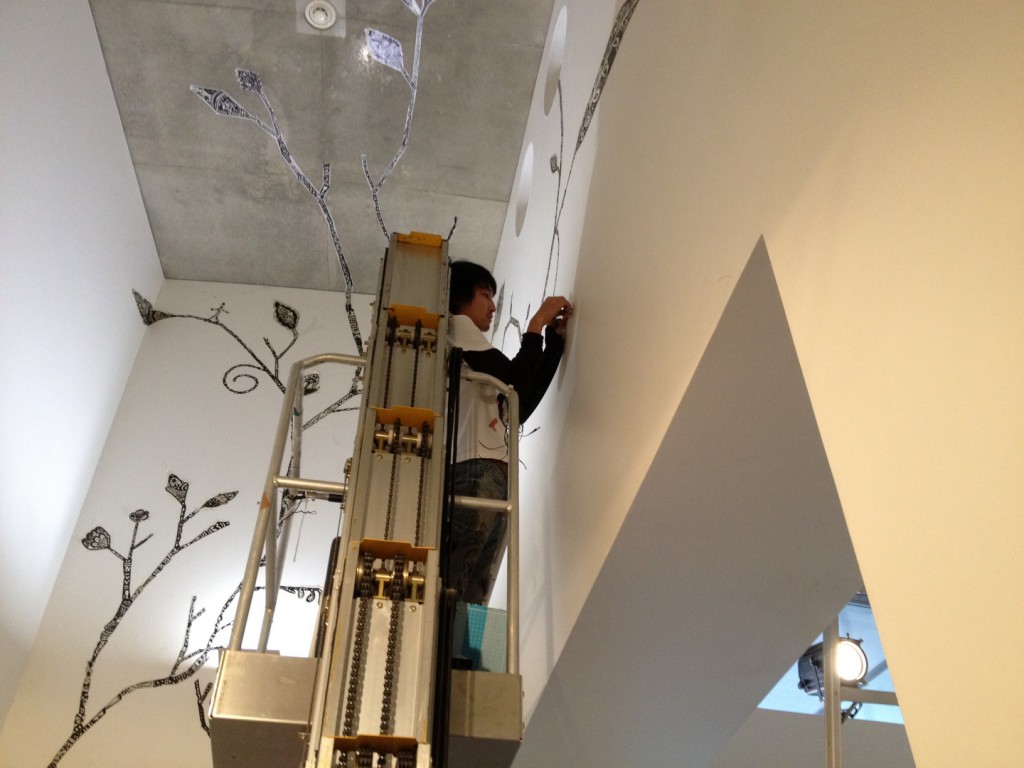 ■Sprouted Plants
These are works that utilize the same white line material used to paint crosswalks and tomare (stop) signs on the pavement. ASAI Yusuke, with the help of individuals who use that space, cuts out the white line material sheet into the shape of plants, which he later carefully lays out onto his chosen surface (roads, etc.) to create a composition. 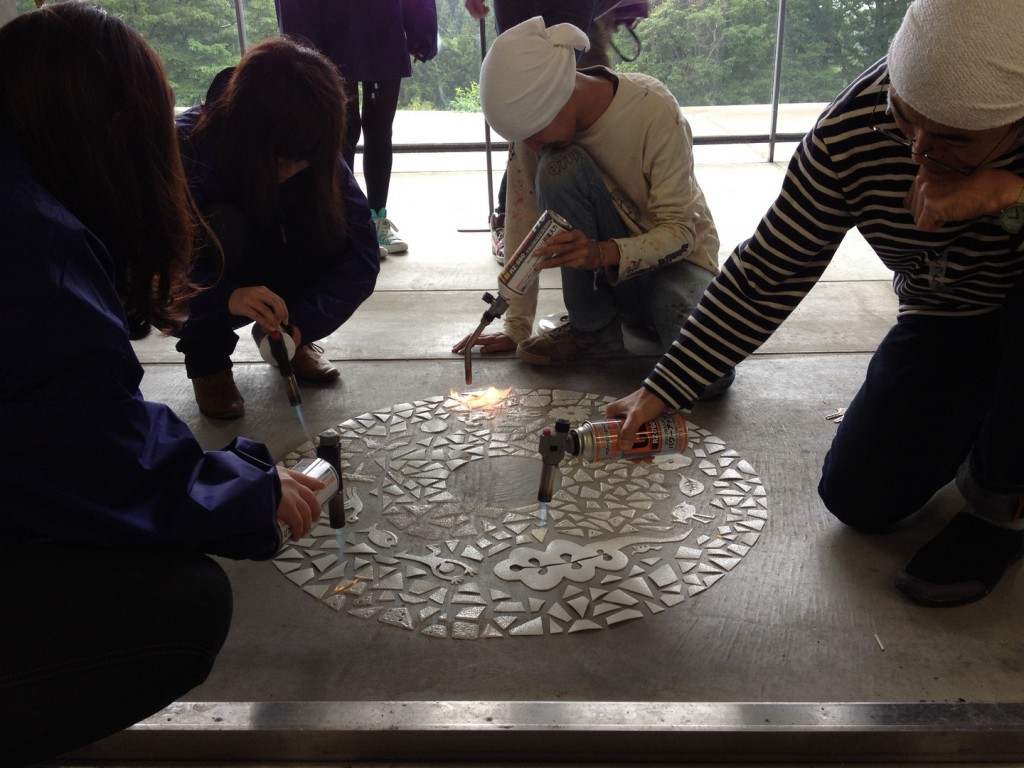 ■Flour Painting
These works are drawn on walls and windows using wheat or rice flour that has been dissolved into water. These flours have a fine texture and are very viscous, so they stick well to even smooth surfaces such as glass. This time, ASAI completed his work on the upper glass windows of Gallery A during a workshop of around 30 people. 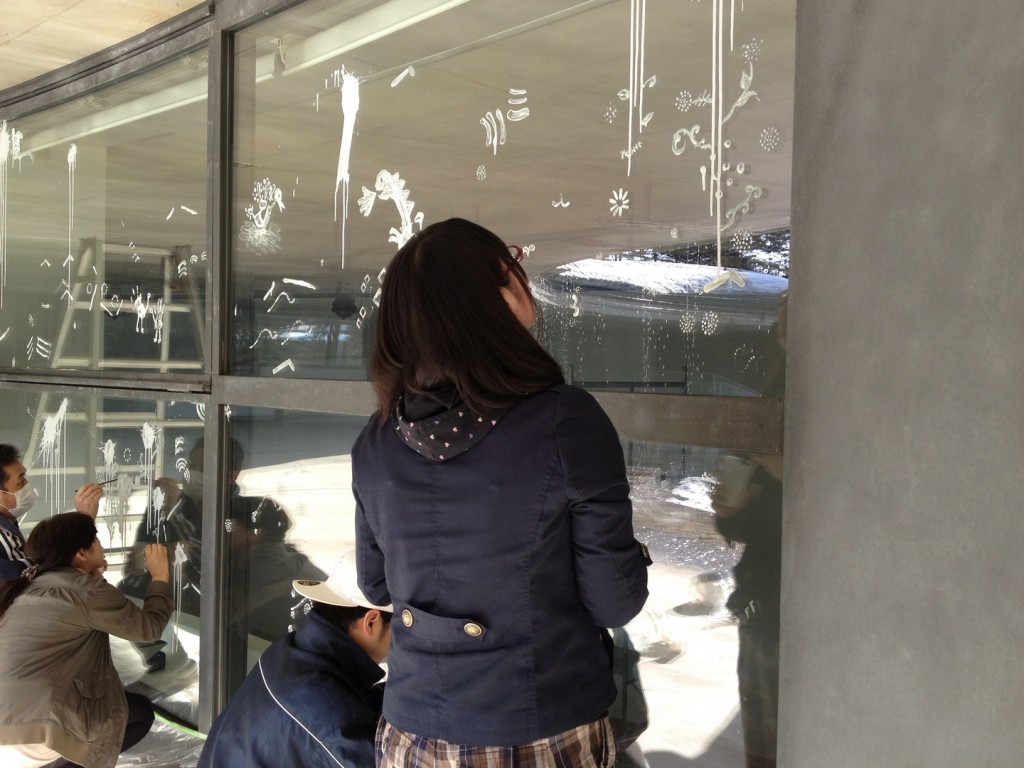