Body Perceiving---Time in “Layer Drawing” and Space in “Stripe Drawing”

In his lectures and writings, NAKANISHI Nobuhiro often mentions unfinished works by Michelangelo. In some way it is related to the basis of his sculptural faculty of observation and production method, though he presents his works using varied means as a medium. What is important here, however, is that he has touched upon his two physical but vicarious experiences taking Michelangelo as an example. According to Nakanishi, viewers of Michelangelo’s sculptures of slaves are having two kinds of vicarious experiences: one is their vicarious experience through the body perceiving the character sculptured with a carefully thought-out look and a twisted pose, and the other is that viewers feel and sense vicariously through the sculptor who made the statue in marble. It might be a viewpoint peculiar to artists to read the sculptor’s feelings and senses in a figure sculpture being carved to perfection, which looks almost inappropriate to the materiality of marble. After all, the above-mentioned reference about assimilating, through the viewer’s body, different kinds of physical senses and feelings between the artist and the created character concerning the same image is applicable to Nakanishi’s work.

As a matter of course, we do not perceive the world only through a fixed visual image like a photograph focused from a fixed point of view. You might say that the process of perceiving an object is a close, continuous relationship between brain, motor nerves and retinas directed towards the overall picture of the object. In producing his work, Nakanishi seems to show this continuous relationship using a continuous process, not excluding retinal visual image. Viewed in this light, the “Layer Drawing” series shows the continuity of movement, while the “Stripe Drawing” series that of space. In this way, he is probably presenting the image perceived through the body, comprehending the process of grasping the whole picture of the object.

In “Layer Drawing #001 - #081” (2004-5), by making up the whole picture with the accumulation of continuous changes of time and movement of each object and scene, he presents in a form the process of grasping objects beyond the two-dimensional visual image. The pieces look three-dimensional without reality contained in small shining boxes (the image seems to be floating in a small box because 24 slide-mounts are piled up). However, this object is not three-dimensional with depth. It has another dimension, that is, the element of continuous movement produced by continuous changes in the object and scenery.

In “Layer Drawing -- Fog” and “Layer Drawing -- Cloud,” (2005) on the other hand, the same approach is adopted, but the element of viewers’ movement has been brought in. This continuity of movement refers not only to the artist’s perception but also the viewer’s physical experience. In order to look at this work, approximately 20m long in detail, the viewer needs to walk that long. Looking sideways at “Layer Drawing Cloud,” in which the sunrise was photographed at a fixed observation point, while walking along, viewers feel that they see slightly shiny clouds floating slowly, due to after-images caused by their movements. The viewers’ perception of continuous time, which they experience as they look at a difficult-to-capture phenomenon like ever-changing clouds and light, is brought back to their senses. In “Layer Drawing Fog,” viewers feel as if they were actually walking in the forest looking at thick, milk-white fog changing its appearance and trees becoming visible one after another. There, they can also feel the artist’s view and his walk, and gradually assimilate them all. On turning your eyes sideways, however, you will find “gap” of discontinued time, and the materiality of film is exposed. This clear difference could be compared to the borderline between the image sculptured by Michelangelo and marble as a substance.

As this work produced for the ACAC artist-in-residence program 2005 is displayed along the curved line of the characteristic semicircle of the gallery, 100 sheets of film are arranged with slight gap in-between. Accordingly, space behind each photograph permeates through the picture so that the image floats in the inorganic space. Being arranged in piles, the films show fog and clouds thicker than real and seem to be a mass having jellylike weight and non-fluidity/non-motility. It is suspended in midair as cutoff time. That time is different from the time that we recognize when we read the hands of the clock moving on the dial, because it begins to move only when we move.

On the other hand, “Stripe Drawing” reminds us of spatial continuity. Nakanishi produced this new work “Stripe Drawing – Transparent view” (2011) especially for this solo exhibition. Twelve acrylic boards are placed in a U-shape, and viewers can go inside. Long, straight, thin grooves are cut on the surface of the board by an engraver, and on the transparent surface are forms that remind us of trees in the forest and floating clouds. Those white lines look as if they were sprayed on the acrylic board and look floating and full, rather than just vertical. Not to speak of Nakanishi’s disclosure, it is exactly a scene of snow. Have you ever walked or driven in a blinding snowstorm? Untouchable white is all over the world. The familiar open space is covered with untouchable white. Even when I am sure that my eyes are open, and my feet (car) on the ground, it is difficult to keep balance. Surrounded by overwhelming whiteness and coldness, I feel all my senses becoming numb.

Entering the U-shaped corner, because sound in the surroundings is cut off, I begin to feel my senses weakened as if wrapped in a thin membrane. People and the wall on the other side are seen through the transparent acrylic, and it is difficult to establish the point of focus between the front and the beyond, or lines and blank space. With focus of my eyes on the lines, I see the white world come to the front, and when the focus is on the backdrop, I see space between the backdrop and myself filled with the white world. For “Aomori Reflection,” (2010) a monument in front of Shin-Aomori Station, which was made prior to this work, he used the same method, but made the work on a mirror plane. Therefore, viewers standing in front of the work and things in the background are reflected on the blank surface, so that the picture and the blank mirror as well as the real and the depicted scenery are coming and going in front of my eyes. In this work, on the other hand, while the viewer’s body remains there spatially detached, his or her eyes look penetrating forward. So, there is a feeling that the space seems to spread to the front as well as to the rear over the boundary of the body.

This “Stripe Drawing” series is Nakanishi’s two-dimensional work, which he has continuously produced since 2003. He expresses his work in words as follows: “It is an act of touching what I am eager to touch but unable to do.”[1] In the “Stripe Drawing” series, a vacant space is filled with thin lines, and the blank part is loaded with suggestive forms. In other words, you might say that he replaces, with lines, a sensation of feeling something invisible or something untouchable like air and light filling up the place. It is not simple replacement of perception with something else, because, for instance, time he spent to get to that certain scenery and related memories must be included. Looking closely at vertical lines drawn freehand in “Stripe Drawing,” you see those lines quiver slightly as his body shook despite himself. Those lines that remind us of the artist’s body movement show us an individual’s physical feeling, and the “scenery” expressed as the collective form seems to emerge as scenery of the expanded body, which is associated with ambiguous relationship with the world and an expanse that begins to melt into space.

“Stripe Drawing Endless” (2009) displayed in the same exhibition depicts this point graphically. A video showing pencil drawing on paper is on loop, and it is overlapped with the state of the body that is endlessly expanding without knowing where to draw a line between the body and scenery. It is inner space as well as outer space that can be obtained by reversing the relationship between space and an object/material that exists in space with weight.

I believe that Nakanishi uses different media for the work of expression because he tries to grasp the overall image of time and space, which are continuous and inseparable, through the body. It can be said that by grasping untouchable and invisible space and time through the body, he tries to visualize and represent them as images reflected on the body including various internal senses and movements, which are considered to be some common feelings. 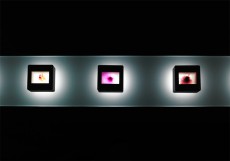 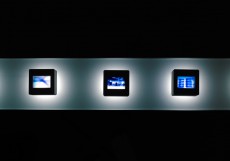 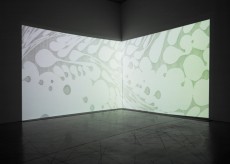 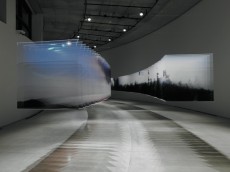