Several of the pieces displayed in this exhibition are giant pieces made by superimposing layers of various Japanese paper that have been joined together. You may have the sense that you are looking at a huge mural or as if you are being enveloped by the painting.

In this exhibition, MISE will display giant landscape paintings in the Japanese-style painting (Nihonga) style which incorporates characteristics of Japan, Tohoku, and the Aomori region. During the exhibition, the ACAC will hold lectures, talks, gallery tours, concerts, and ink painting workshops among other events. In addition to his new work “My god”, MISE's works will fill the ACAC's gallery space centered around his fifty-meter-long “Kikei” (2003-2010). 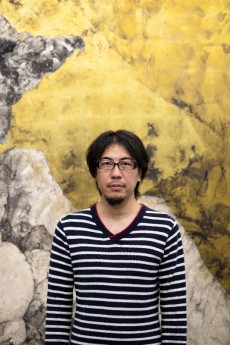 Born in Nara Prefecture in 1973, MISE Natsunosuke received his M.F.A. in Painting with a focus in  Japanese-style painting (Nihonga) (Japanese-style Painting) from Kyoto City University of Art in 1999. He is also the winner of the Special Committee Award at the 5th Higashiyama Kaii Memorial NIKKEI Nihonga Awards in 2012. With a style that is vividly conscious of Japanese-style painting (Nihonga), he has made works which use rust as a material of expression and landscape productions laden with gold leaf and is currently engaged in expressions which primarily use sumi ink. Since 2009, he has been working under the title "Is it possible to create Tohokuga (Tohoku-style Paintings?" at Tohoku University of Art and Design, where he is an associate professor. As a part of his teaching as much as it is an investigation into Japanese-style painting (Nihonga), he conducts workshops, lectures, and exhibitions in addition to tutorials that contemplate art in the context of Tohoku. Major exhibitions include “MOT Annual 2006 –No Border—" (2006, Museum of Contemporary Art Tokyo) and "Kami. Silence – Action" (2009, Staatliche Kunstsammlungen Dresden, Germany) among others.