On August 4, we held a talk event by Gabriella Mangano & Silvano Mangano, one of the artists in the summer AIR being held.
In this program, They researched a Japanese word “Ao” ( it means “Blue” in Japanese) which is from the name of place “Aomori”. Based on the poem in the feminist literary magazine related to the feminism movement named “Seitoh” ( It is Japanese translating “Blue stocking” ) issued during the Meiji era, they created video installation and a sculpture.

In this talk event, they talked how they have created the works so far,
including past video works etc. 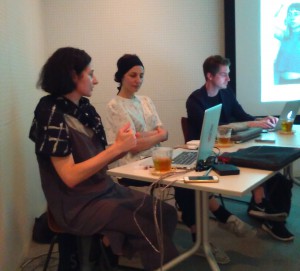 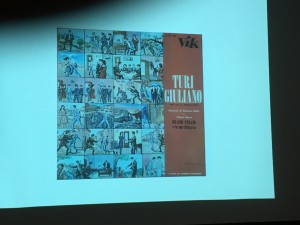 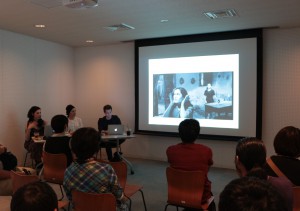 Their parents are Italians and grew up in an environment familiar with music from a young age. The artwork of the record jacket and old black and white movie influenced their subsequent creation. What they paid most attention to was the gesture rather than the contents that the actors were talking about.
At the early time, each of them was making drawings, but after that, they began
to create video works shooting the performance.
In the same way to capture the instantaneous motion with the camera, they
captured the body of the person who performs in the space as a line. 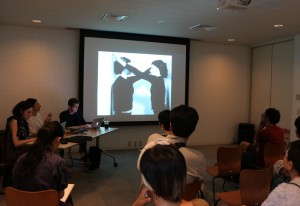 Then the subjects they express changed into society and politics.
They produced performance that incorporates the gesture of the people who come in the mass media and the images in the net, and try to “translate” the events occurring in society with the movement of the human body.
they have a role of recording the moment of history and society. 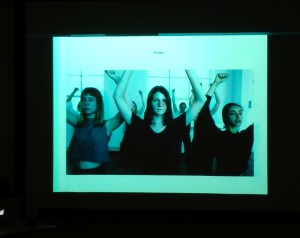 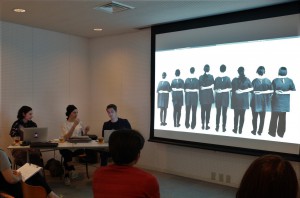 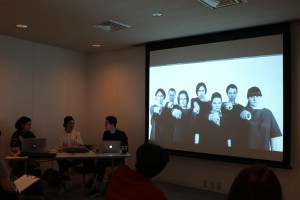 Lastly, they explained the work of this program.
Poetry incorporated in the work has translations of several languages, they tried to make their own “translation”. Movement tracing the body seen in the video represents a woman’s presence. In the movement touching the earth, she talked about what she is in that space, representing the depiction of the mountain eruption in a passage of poetry. 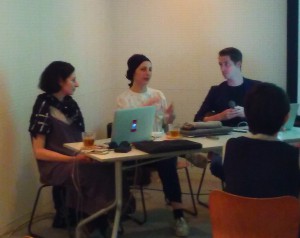 Next event is on 11 th this weekend. The talk event is by Sahil Naik who is also an artist of this program. It will be an opportunity
to know more about his works!