On June 10, a talk event by TADA Tomomitsu and MORI Tatsuya was held.
Tada has known Mori’s books and movies until now.This time they talked about crimes and punishments that Mori has reported as one of his theme. He talked about Norwegian Criminal Justice he gatherd data in the past,.
In Norway, punishment was tolerated about 40 years ago, now it is said that Norway is the lowest country in the recidivism rate. It was a talk about when he interviewed with a criminal scholar at Oslo University who was a key person of promoting tolerance, and also with inmates at the oldest prison in the area. 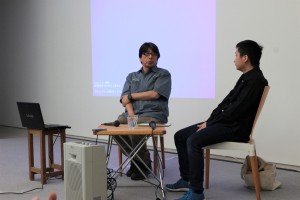 In the room where inmates live, he said that facilities such as television sets and kitchens were set without inconveniences, and people had meals together and relax.
They live in a stable lifestyle with the rules of community life, also there is an environment they can receive education.
We were surprised that it was totally different from the situation in Japanese prison. The primary objective for prisoners is to be rehabilitated so that they live in society again rather than receiving punishment here.
He said that a prisoner lived there led to mental stability and became a feeling that he would return to society.

In addition, in the interview at the Ministry of Justice, an officer talked about crimes.  According to him, most crimes caused by three causes, “love, education shortage, poverty”. What society should do for criminals is to compensate for the shortage, which is said to be “punishment”.
Inmates don’t commit a crime again because they get back to society given jobs with their houses when they are released. As a result, the number of offenses in this country has decreased.
Mori talked there were the large number of recidivisms and the severe punishment currently occurring  in Japan, it could be said that it was a harmful effect caused by strengthening the idea of excluding evil without forgiving. 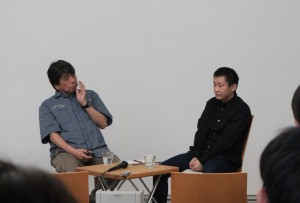 Tada also talked about staying in Norway for residence and research in the past. The artists broadcasted about their own exhibition on the radio, there was space for production for the Sunday painters. He felt that the way of artists is very different from Japan.

Through these talks, as examples of the way of punishment in Norway and the environment of the art experienced by Tada, we saw the country of Japan from another angle.
In Japan, there are many organizations and groups that tend not to accept diverse ideas. Also, if we only know one thing, we will only accept it, but we need to go out to a different environment such as another country, and compare it with diverse ideas. They led to talk about the way of art works never stayed in one way of thinking which deliver various interpretations depending on the viewer. 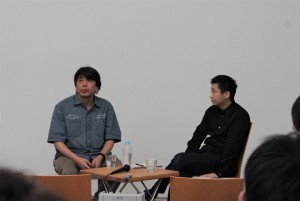 They also talked about Tada’s works produced with feeling violence and hatred, various emotions, life and death which are ubiquitous things people can not escape.
the participants might have had an opportunity to look at individuals and society that can accept diverse ideas.